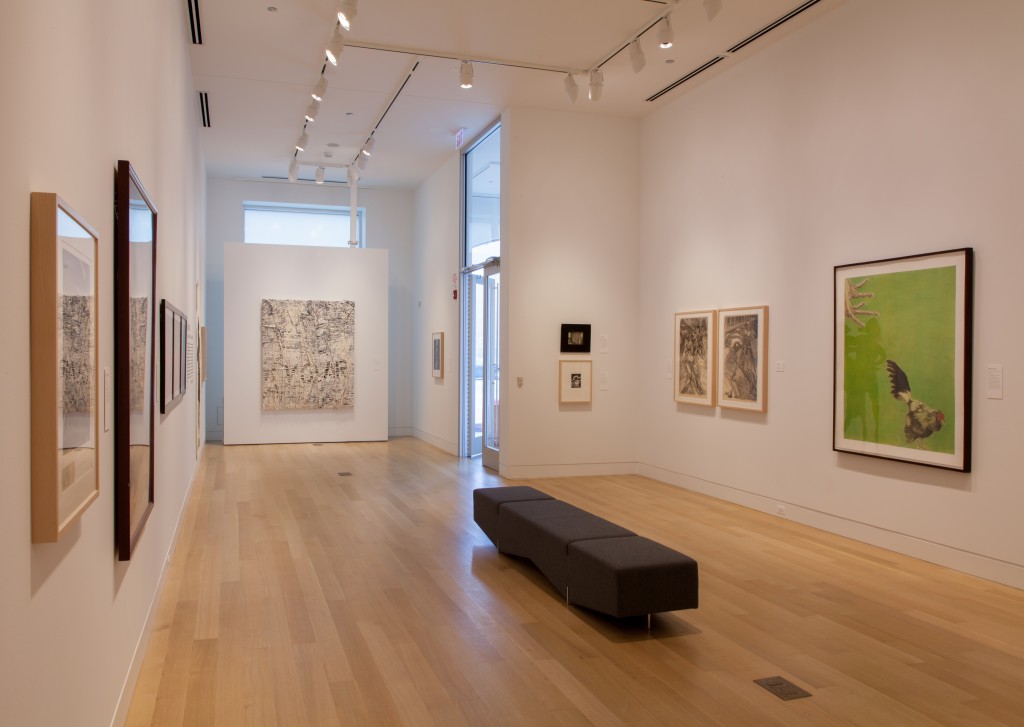 Installation view of “Nexo/Nexus: Latin American Connections in the Midwest” at the DePaul Art Museum, 2016

With two Cuban Americans running for president and Mexican immigration a key issue in the campaign, an art exhibition of the Midwest connection to Latin Americans could hardly be more timely. The twelve artists here are evenly proportioned among Cuban, Puerto Rican and Mexican backgrounds. Most were born between 1940 and 1960, in what appears to have been a transitional generation. Nereida Garcia Ferraz addresses the disruption of exile from Cuba. Héctor Duarte expresses the hope and fear of undocumented Mexican migrants blown across the desert like tumbleweeds. Luis Jiménez shows lost people staggering onto our mean streets, while Nicolás de Jesús shows strange masked hombres riding the Halsted Street bus. Felipe Ehrenberg contrasts tropical nostalgia with dark urban canyons. Bibiana Suárez compares her fading ethnic identity to a gamecock fleeing the cockpit. The fragmented Afro-Caribbean background of Maria Martínez-Cañas has been chopped into even smaller fragments. Arnaldo Roche Rabell echoed the anguished Monster Roster when he moved to Chicago, while José Bedia Valdés traveled to an Indian reservation to discover even deeper alienation.

The piece by an older Cuban exile, José Bernal, expresses the spiritual trauma of relocation more poignantly than all the above. Otherwise, a more joyful, integrated visuality can be found in the work of artists born before 1940. José Guerrero, the legendary Pilsen muralist, depicts a fierce, wise face that can overcome anything. With the inner vitality of El Greco, he exemplifies the Taller de Gráfica Popular tradition. The life-size woodblock print by Antonio Martorell depicts a fiery, flamboyant Latina who might have just stepped off the set of “West Side Story.”

But the most symphonic, celebratory image comes from the youngest artist, Angel Otero. Born in Puerto Rico in 1981, he came to Chicago for the School of the Art Institute. The theme of flight (“volar”) is literally spelled out across his monumental work. His collage of paint skins on twisted canvas demonstrates a world of feeling as thrilling as it is complex. If he is promising a beautiful future for our culturally diverse society, I’m nominating him for President.

Through April 24 at the DePaul Art Museum, 935 West Fullerton.