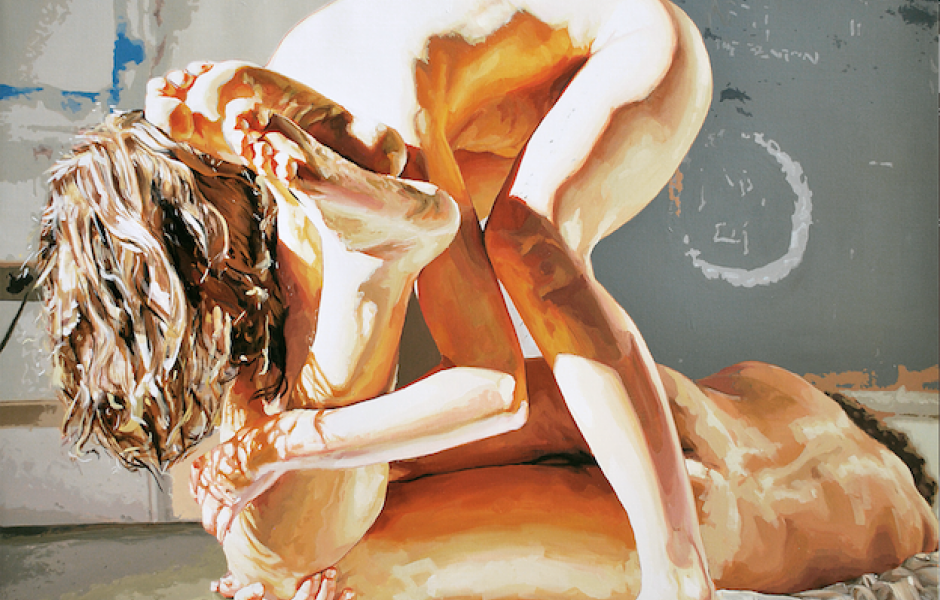 Sexual energy is curiously absent from these paintings of a naked young pair, even when the tumescent male organ is prominently displayed. The coupling is more clinical than balletic, and more balletic than erotic. There are no soft pillows, no furniture at all except for a blackboard covered with indecipherable white marks. The setting is as sparse as a classroom and the colors are as muted as an airport waiting room. The couple appears to be rehearsing a modern dance about loneliness, despite their intimate interaction. It’s fascinating because it has been so patiently designed to feel heroic. Obviously, something very important is happening, even if we can’t guess what is at stake.

As choreographer and set designer, the artist seems to have made countless manipulations of his models and light sources. The results appear like storyboards where the narrative seems more important than the medium. Indeed, the large paintings have the visual qualities of digital images that have been sized up to bigger screens. The surfaces seem flat, dry and matter-of-fact, but they still have painterly expression. You can feel the tension in every drawn line and the compositional control of detail that photography cannot achieve.

What kind of stories are these storyboards telling? They seem to be more about youthful experimentation than any kind of moral statement or social theory— what kids do when they’re lucky enough to go to college and focus on finding themselves. The coupling is between an active white woman and a passive black man. If it’s a wrestling match, she’s won. But losing is just as important as winning in consensual love games and everything feels tentative and interchangeable. The same strong designs could accommodate two men, two women and the full range of American ethnicities. The drama here concerns an identity that is personal rather than ethnic or gendered. Isn’t that the great American Dream? Or, at least the progressive version of it. Nobody is normal but nor is anyone queer—everyone is just searching.

Hammie’s paintings feel fresh and immediate though they are carefully planned. More importantly, they are more about life than art.