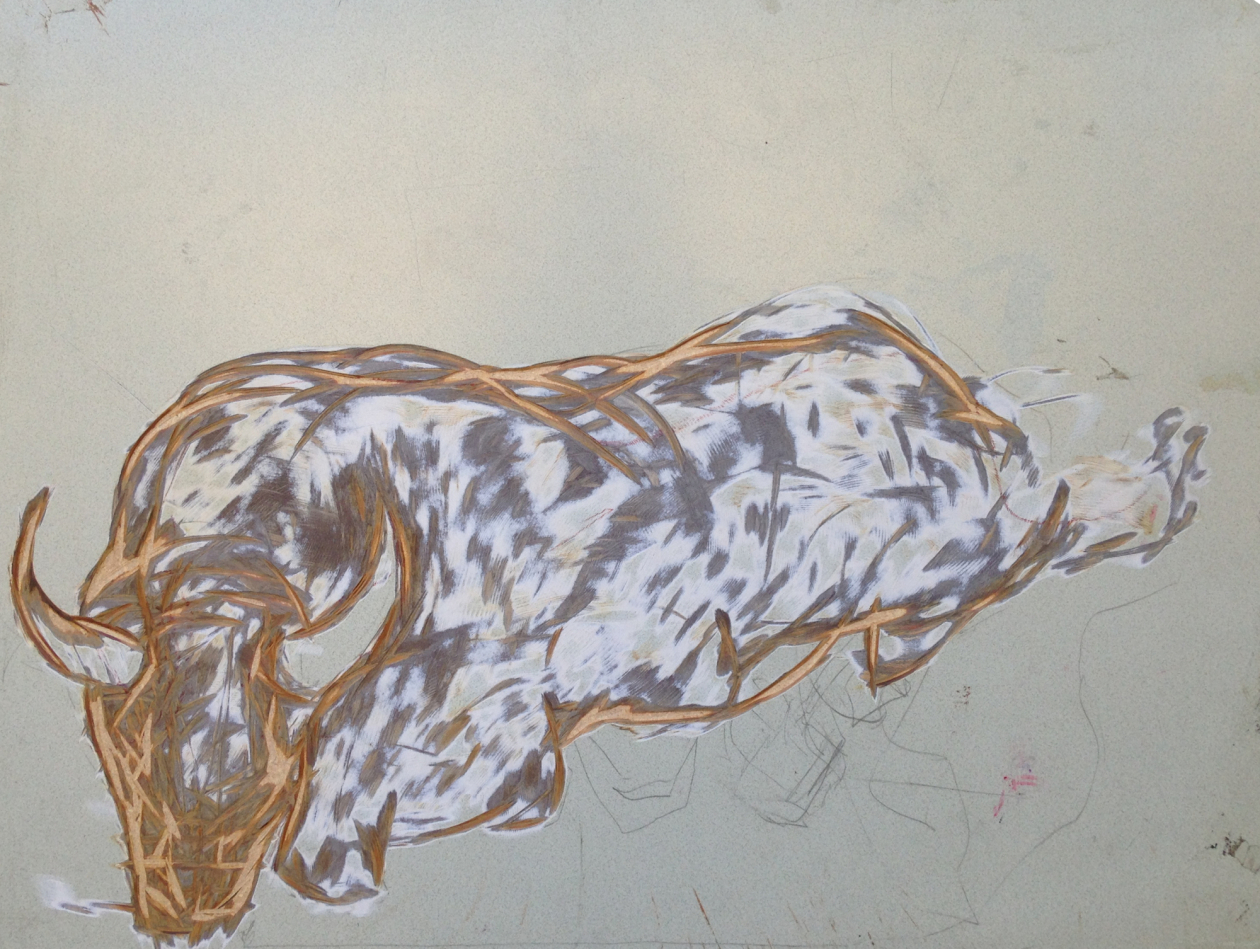 The news that Chicago lost more residents last year than any other American city would come as no surprise to anyone who happened to be downtown on April 1. That afternoon, thousands of teachers marched through the Loop on a one-day strike to protest stalled contract negotiations. While Chicago Public Schools CEO Forrest Claypool blamed Governor Rauner for holding the state budget hostage, Mayor Emanuel accused the Chicago Teachers Union of making their point at the expense of the 300,000 students who did not attend class that Friday because their teachers were out marching. By all accounts, the strike was very different than the 2012 walkout, which focused more narrowly on contract demands and was called after the negotiation process formally dissolved. In a word, that strike was “legal.” This time, the walkout was nearly a surprise, and it resembled a protest not unlike some of the other demonstrations against police brutality and government cover-ups that have become common in Chicago’s streets under Rahm’s rule. Beyond demanding better contracts, teachers and their allies called for comprehensive reforms to the city’s education commitments, pointing to systemic racism as the underlying cause of the school closings, missing contracts and frozen budgets. The message was clear and on par with a swelling trend in current U.S. social movements: blame lies everywhere and the entire system needs a revolution. With all these woes, it’s no wonder Chicago is shrinking.

That Friday, a bitter cloud of irony trailed me as I rode the El past the protests to see John Preus’ exhibition at Rhona Hoffman Gallery in the West Loop. I have long struggled to reconcile my position as a cultural worker with my political beliefs and activism and I admire those who have struck a better balance than I yet have. Preus is one of those people who seems to have found a way through his work, which employs exquisite craftsmanship to render formal beauty from materials imbued with complex social and historical memories. To call Preus a builder is both apt and inadequate to describe the myriad technical, material and social forms of his work, which ranges from handcrafted furniture to building rehabilitations, with everything from custom kitchen cabinets to abstract sculpture in between. Throughout all of it, he commits his considerable craftsmanship to making his work from cast-off materials salvaged from decommissioned and demolished buildings, most of them in Chicago.

While he might still be best known for his work as the creative director at Theaster Gates’ Rebuild Foundation, it was his 2014 show at the Hyde Park Art Center that remains among the most important contributions to Chicago’s visual arts in recent years. Over the course of the summer after CPS shuttered an unprecedented fifty of its “lowest performing” schools—most of them in low-income and minority neighborhoods—Preus diverted truckloads of desks, chairs, wood and other materials from these buildings to his workshop and the Art Center, where he constructed a massive, inhabitable structure in the form of a dying bull curled up in the corner of the gallery. For months, the belly of “The Beast,” as the work was called, functioned as a makeshift community space, hosting workshops, artist talks, performances, potlucks and much else in a beautiful, disemboweled classroom that opened up onto the street outside. The temporary work was no replacement for what Chicago had sacrificed that past year, but the dying beast—its throat slit to make a narrow entry from the gallery space into its accommodating innards—made for a symbolic rite of mourning in defiance of what Mayor Emanuel had so coldly denied when he drew a knife across the jugular of the city’s commitment to public education. 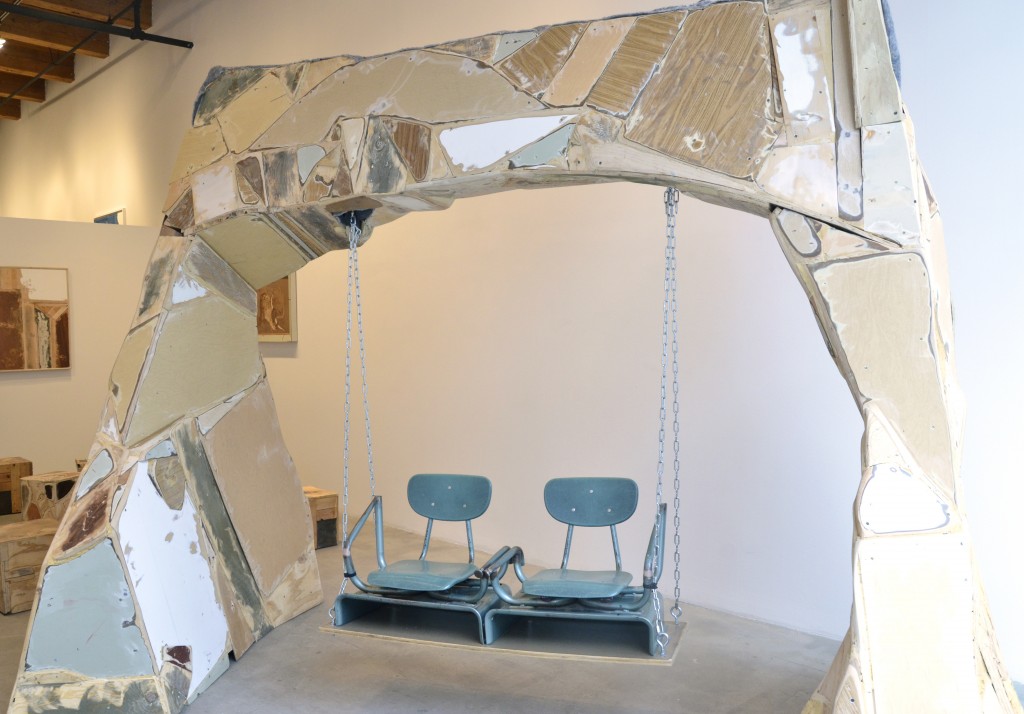 Preus’ show at Rhona Hoffman was a far cry from his Hyde Park exhibition in part due to the upscale neighborhood and the commercial setting. But the work showed the same careful attention to substance and surface as always, with rough and patchwork planes of wood, veneer, particle board and pale green desktop laminate joined smoothly and sinuously with a level of skill such crude materials were not meant to see. A flock of stool-sized cubes made this way have been named the “Chicago Archive Series,” a fitting title for an endless array of unique, but uniformly sized boxes that contain the material remains of a history that the city has been eager to forget. Priced affordably, these boxes will be scattered among many homes in Chicago and beyond, making myriad keepers for the city’s memories. Near the front window, a double-seated swing hung by chains from a craggy arch. Hulking above the crowd of cubes, the swing looked out of place, as if it had outgrown its peers and the gallery. I was tempted to sit down, but instead I ran my hand over the smooth, fractured surfaces of its side, my fingers eventually catching in a gap in the center of a wood-veneered plank with a corrugated cardboard core.

A swing might seem a silly, or even cynical gesture to make from the detritus of abandoned schools, yet the sculpture’s promise of transformative creation and the liberating freedom of play are precisely the things of which, long before the buildings were closed, students at many of these schools were systematically deprived. Jim Duignan, an artist who founded the Stockyard Institute twenty years ago, has also found promise in the form of the swing and other playground equipment, which he has installed in exhibitions and outdoors like a rogue park-maker. Currently, Duignan is coming to the end of a long project that calls on communities all over Chicago to reimagine what their abandoned schools could become in the wake of the 2013 closures. Through its website, the Stockyard Institute is collecting submissions in the form of drawings, essays, poems, photographs and other works of art. After June, the proposals will be published in a catalogue that will be available to city and state officials as a set of community recommendations on the future of the closed schools. The project is at once punchy and pragmatic, asserting marginalized voices in policy debates while pointing to their painful absence in the official discourses that determine our shared conditions of living. If Preus is focused on latent potential, Duignan moves that potential toward promising, provisional realities. 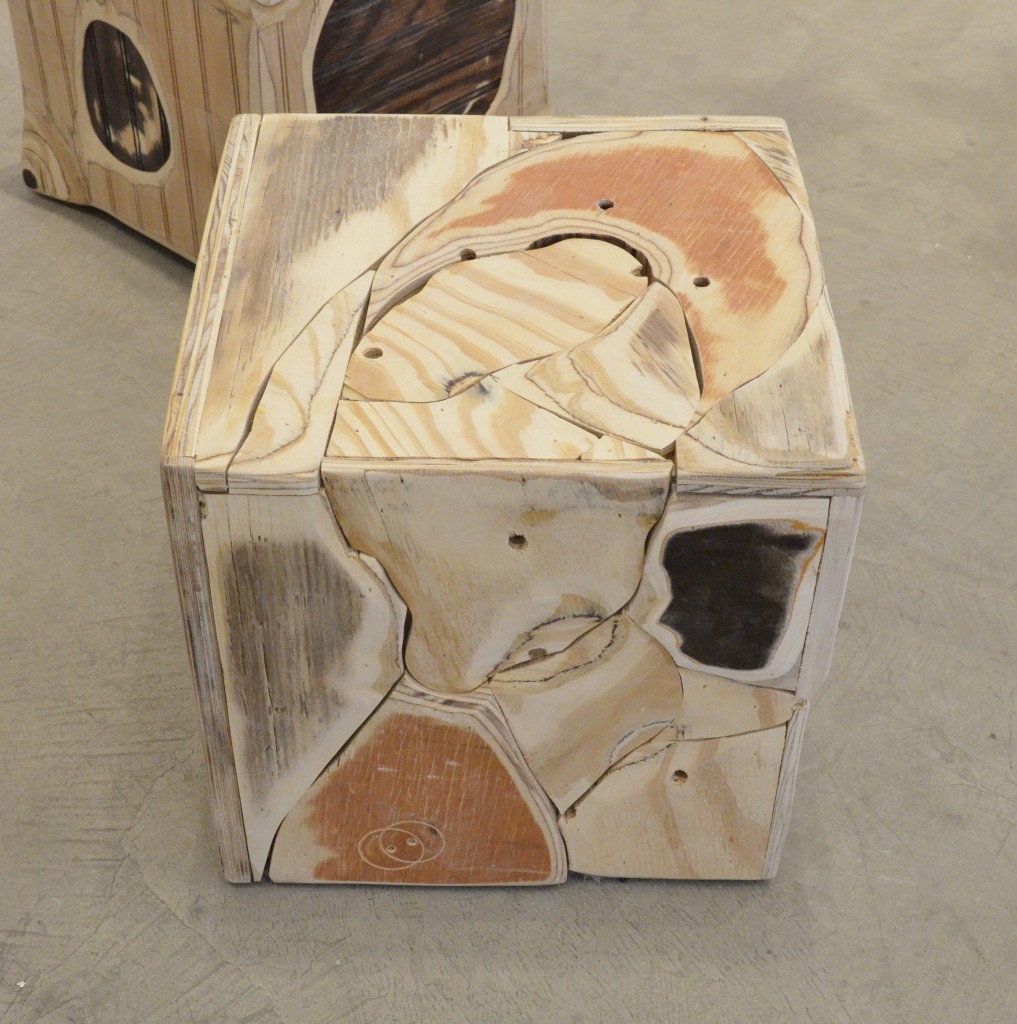 I have long sought to reconcile my cultural work with my politics and activism. Weaving politics into my art writing is one way, and supporting the work of artists I believe in is another. Of course, I cannot afford to buy art at a level equal with my enthusiasm for it as a critic. The summer when Preus built his beast, I bought a drawing by Omer Fast in an online auction supporting the Palestinian Medical Relief Society and the Physicians for Human Rights–Israel. The proceeds funded their work in Gaza after the 2014 Israeli offensive killed more than 2,200 Palestinians, most of them civilians, and destroyed more than 20,000 homes. I think of the rubble in Gaza and it reminds me of the rubble that Preus has transformed in Chicago. Last year, I bought a work by Preus at the Chicago Artists Coalition’s annual Starving Artist benefit, which is coming up again this month and offers work by incredible Chicago-based artists at affordable prices to help the CAC’s mission of supporting emerging artists that keep this city fresh with creativity. The work I bought is a pale green school desk top carved with the sketchy form of a lying bull. The beast reminds me of my dog Roxane, who passed away last fall. It reminds me of being a teacher at a charter school in 2012 and crossing CTU picket lines because my school prohibited unionization. It reminds me of the Stockyards and the industrial slaughter that made Chicago prosper a century ago, when many new schools were built to accommodate the city’s swelling population. When I look at the bull I cannot tell if it is sleeping or dying. The beast is called “Mascot” and Chicago could have no better.

I’m disappointed… Because your valid internal discourse would’ve carried so much more weight had you actually used the correct statistic to start things off. Chicago did not lose more residents last year than any other American city…. COOK COUNTY (about twice the size of Chicago, with around 5.2 million people) lost more population (10,000) than any other COUNTY in the country. Big difference. A few contextual pieces to note: 1. Large counties (Kings, LA, Cook, etc) tend to have the biggest fluctuations throughout the years due to their area and populations. 2. This data shows nothing concrete about Chicago’s population,… Read more »

[…] and less a discrete action. In more than a few of my longer reviews for this forum, I’ve discussed depletion, withdrawal, death and dropping out—dark stars among a larger constellation of loss. For any […]