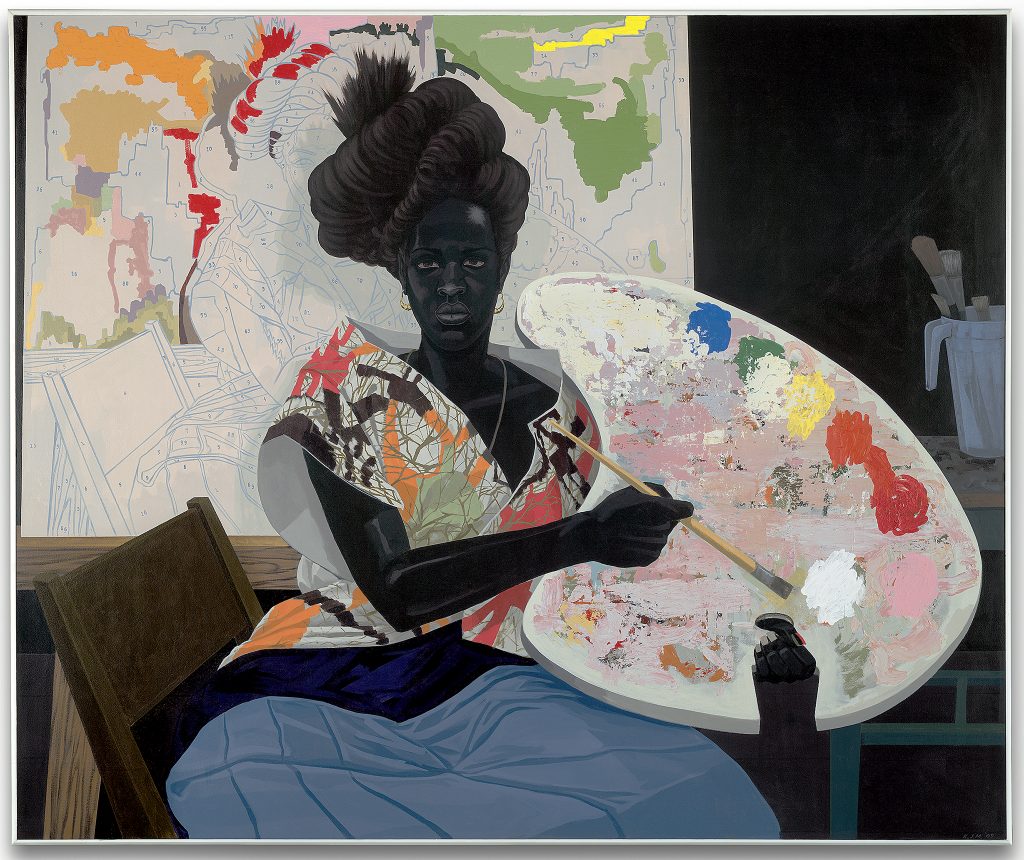 Kerry James Marshall mines the major genres of art history—from figuration and landscapes to abstraction and the granddaddy of them all, the history painting—to accomplish a singular goal: inserting black subjects into the art-historical canon without irony, caricature, self-righteousness or shame. “Kerry James Marshall: Mastry,” his first major museum retrospective, reveals some of the major concerns influencing his goal of sparking an artistic revolution.

Like most career retrospectives, “Mastry” is arranged chronologically. Nearly seventy paintings and related ephemera populate the Museum of Contemporary Art’s fourth-floor galleries along with a newly commissioned mural on the first floor. But strategically disrupting that chronological framework may have provided more insight. In the 1986 painting “Invisible Man,” Marshall renders a figure in black monochrome, the outlines of the body nearly indistinguishable from the background, only the eyes and teeth seem to pop off of the canvas in bright, bright white. A painting completed twenty years later, “Black Painting” (2003-2006) functions similarly, depicting a reclining couple in a bed, their bodies silhouetted along with furniture and signifiers of black resistance movements in flat shades of black. Separated by two decades and thus several rooms apart, these two paintings would have revealed more had they been hung together. 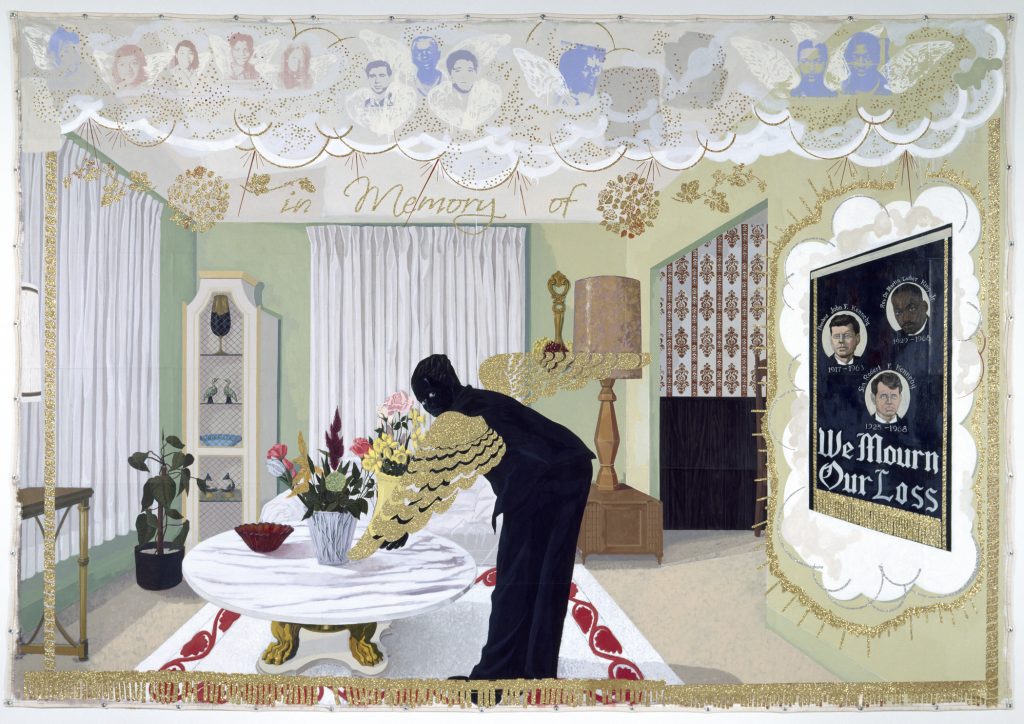 Issues of race and representation have always preoccupied Marshall. Trained in the 1970s, he carried the social and aesthetic tensions of the time into his practice: to stay or break from the “old master” tradition, to paint figures or abstractions, how and whether to address issues of representation. He would exceed mere technical proficiency, using painting to portray black people and visualize black stories in ways not previously seen in institutional spaces.

Marshall’s critiques of the absence and the presence of African Americans in art remain new, compelling and remarkably consistent because of his deep engagement with the history of painting. He has likened his figures to emblems, and many of his grand works mirror that tradition, employing a banner of text across the top and bottom that underscores an issue of social justice.  In “Souvenir I” (1997), an angelic figure with golden glitter wings stares back at the viewer from a room with images of famous Civil Rights icons on a wall with the phrase “We Mourn Our Loss.” Lesser-known leaders and activists form a banner at the top of the frame above the words “In Memory Of,” pointing to the gravity of the sacrifice of those who dared fight for racial justice in the United States. 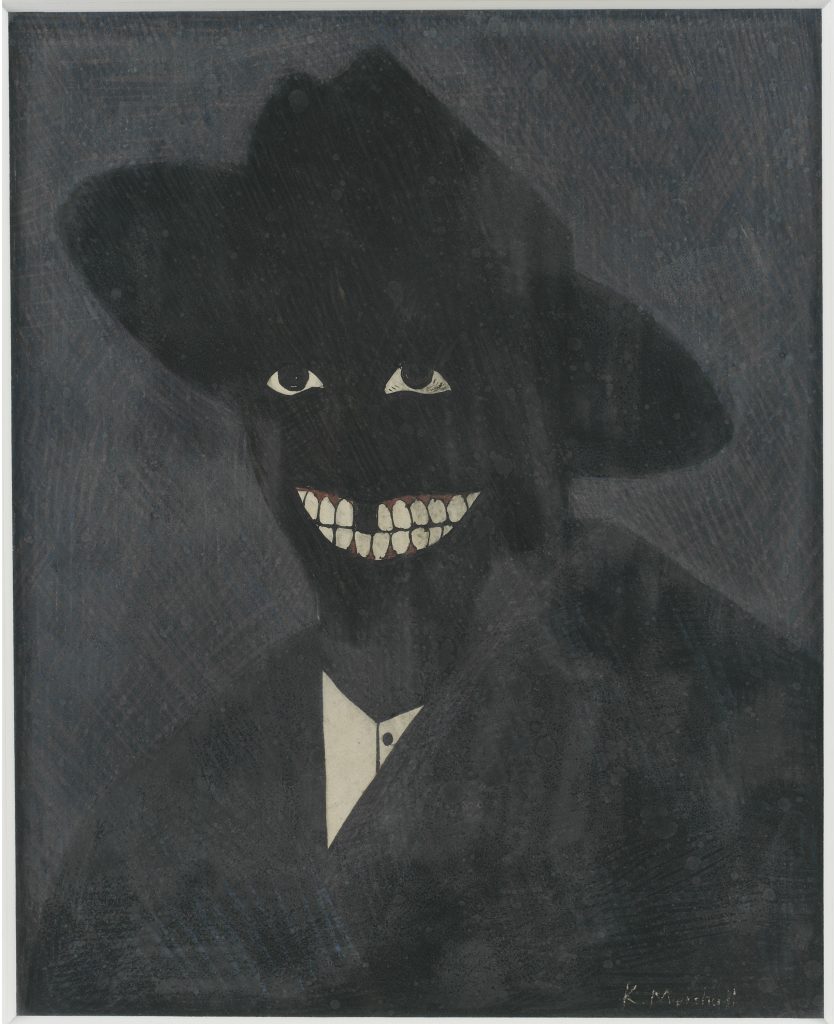 Kerry James Marshall, “A Portrait of the Artist as a Shadow of His Former Self,” 1980. Steven and Deborah Lebowitz /Photo: Matthew Fried

As a student, Marshall admired the power of a history painting to capture the culture of a people, and felt that he needed to create works with such impact. In the mid-1990s, the artist painted “The Garden Project” series, which portrayed mid-twentieth-century housing projects as utopic visions of the future rather than the crime-ridden failures they had become. “C.H.I.A.” (1994) portrays a scene from Rockwell Gardens, a now-demolished Chicago Housing Authority development in East Garfield Park. Painted in the lower right corner are the project’s demographic statistics, including that its population of 4,033 is ninety-three percent African American.

Marshall’s aesthetic concern with generating positive images of blackness is noble and important, but he resists burdening these images with heroism and dignity. Instead, his black figures and the context that surrounds them allow us to understand—to read—blackness. “Mastry” affirms this thoughtful rendering, and proves Black people can do ordinary things and their blackness is not a problem that needs to be fixed. 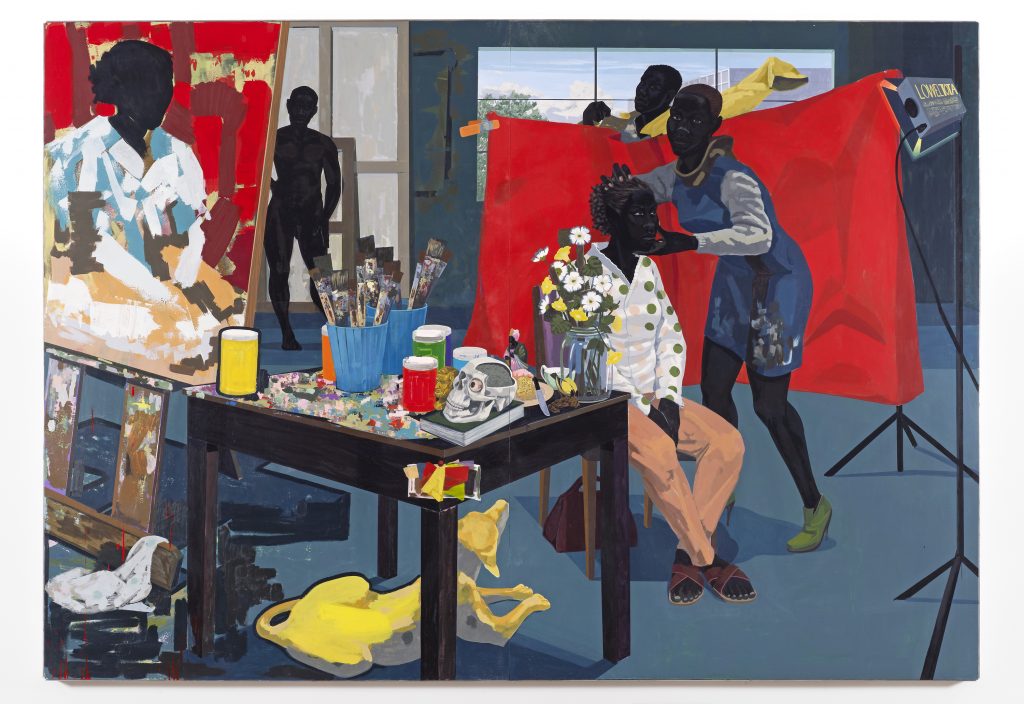 The professors say that race is a scientific fiction but racism is a social fact. All humans, regardless of skin color, have a common biology and an equal capacity to learn, love, hate, dance a polka or shoot a basketball. And yet certain institutions have arisen, especially in the past two centuries, which consign people to superior and subordinate stations in life based upon differences in appearance. Racism divides people who should be in solidarity and forges brotherhoods based on hatred. In Chicago as elsewhere, the social fact of racism can keep you poor or get you killed.

Kerry James Marshall is black, lives in Chicago and understands racism. His paintings represent famous black people (Harriet Tubman in “Still Life with Wedding Portrait,” 2015), black history (“Portrait of Nat Turner with the Head of his Master,” 2011), community life (“School of Beauty/School of Culture,” 2012) and black dreams (“Black Painting,” 2003-6). He sometimes looks in the mirror and depicts his own blackness (“Black Artist—Studio View,” 2002), suggesting the dialectic of visibility/invisibility that has long been remarked by black scholars and writers. Unlike, say, Jewishness or Irishness, blackness is visible on the flesh, but black men and women are often rendered invisible—consigned to unseen neighborhoods, inferior employment and un-commemorated histories. Marshall’s “Black Artist—Studio View,” with its “Mood Indigo” hue, reminded me of Duke Ellington’s jazz composition (1930) and Fats Waller’s song: “Black and Blue” (1930). In the prologue of Ralph Ellison’s novel, “The Invisible Man” (1952), the protagonist, using a phonograph, plays Louis Armstrong’s memorable version of the song and thinks about “the blackness of Blackness.” 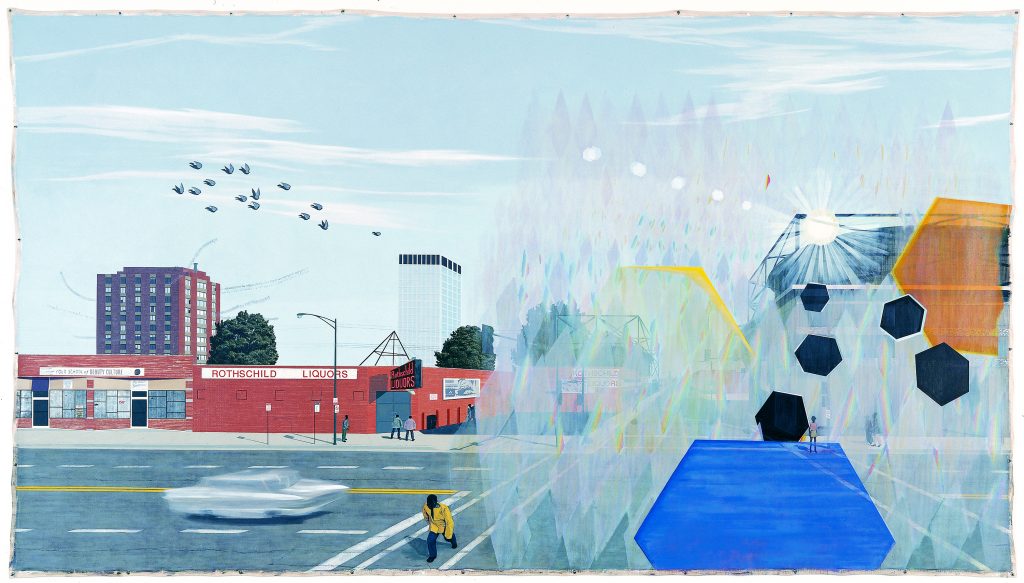 Marshall is a skilled painter, especially at scale. “7 am Sunday Morning” (2003), which depicts a block of Bronzeville and recalls Edward Hopper’s iconic “Early Sunday Morning” (1930), is more than ten-by-eighteen feet. The yellow-jacketed pedestrian and passing car, and colored, floating hexagons and sun-disc at right anchor the spectator in place and time. “Watts 1963″ is nearly as big and depicts Nickerson Gardens, a housing project designed in 1955 by the great black celebrity architect Paul Revere Williams. Like the other four “Garden Project” pictures, it is a modern-day pastoral: young children lie on a green lawn in the foreground, surrounded by palm trees, flowers and a rising sun. The setting and big dots of color suggest Seurat’s “A Sunday on La Grande Jatte” (1886), well-known, of course, to Marshall, while the children recall the young women in the foreground of another great Art Institute picture, Gauguin’s “Day of the Gods ” (1894). 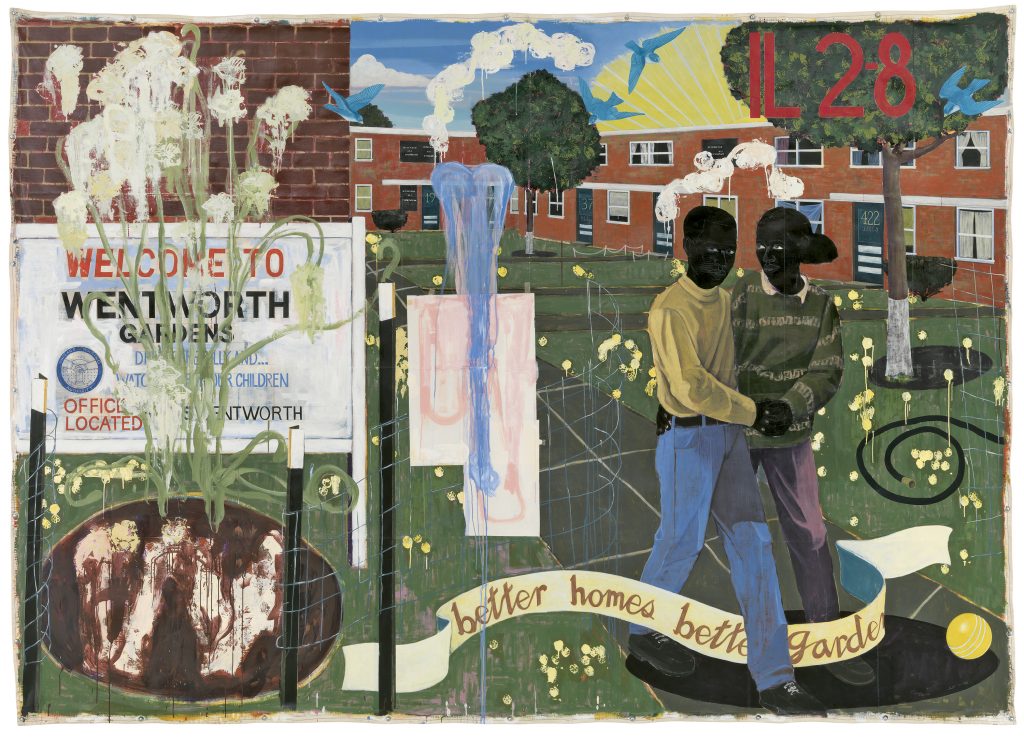 However, in creating a modern pastoral, Marshall risks what the genre has always risked: a false vision of harmony. It’s a point of pride for him that he does not depict the clichés that distort the picture of black life in the United States: gun violence, gangster culture and drug use. But in consistently seeing the color black as presence rather than absence, Marshall neglects its power of negation: “the blackness of Blackness.” Seen in this light, Marshall succeeds best where his pictures are least agreeable, for example in the difficult (its forms barely discernible) “Black Painting” (2003-6). It shows a bedroom, a figure on a bed, and a copy of Angela Davis’ collection of prison writings “If They Come in the Morning: Voices of Resistance.” “The offense of the political prisoner,” Davis wrote, “is his political boldness, [and] his persistent challenging—legally or extra-legally—of fundamental social wrongs.” At his best, as here, Marshall is equally bold in challenging the social fact of racism.