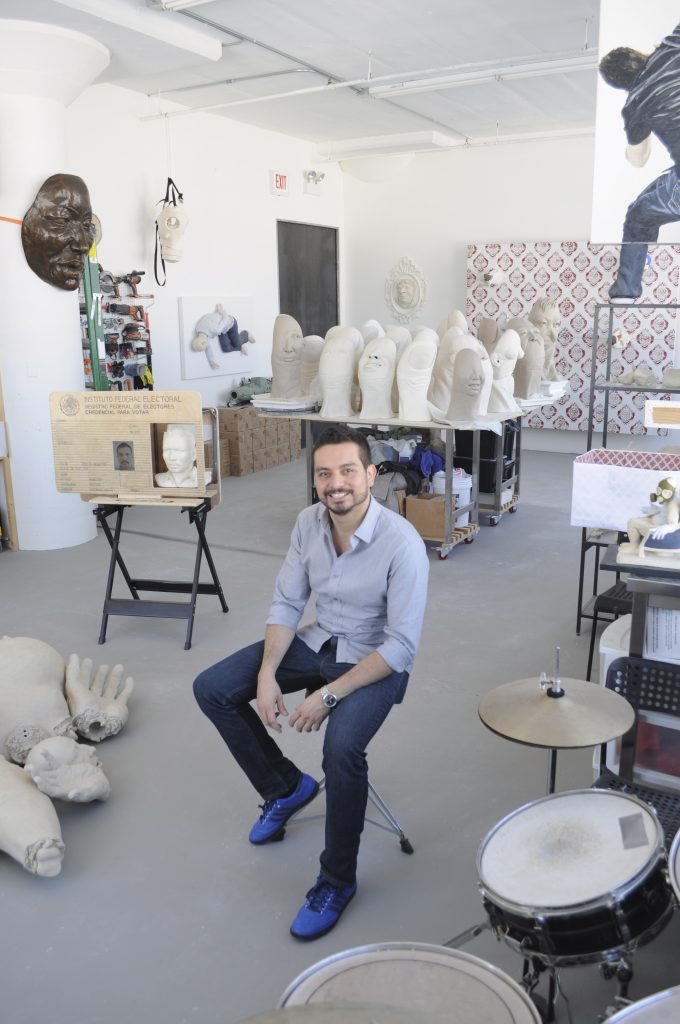 Rodrigo Lara Zendejas investigates associations between the political and the impolitic, and collective and individual notions of remembering and forgetting. In quick measure since his recent arrival, his absorbing oeuvre has been featured at esteemed Chicago venues such as the National Museum of Mexican Art and 6018North at EXPO Chicago, helping expand conversations about sculpture as form and process. 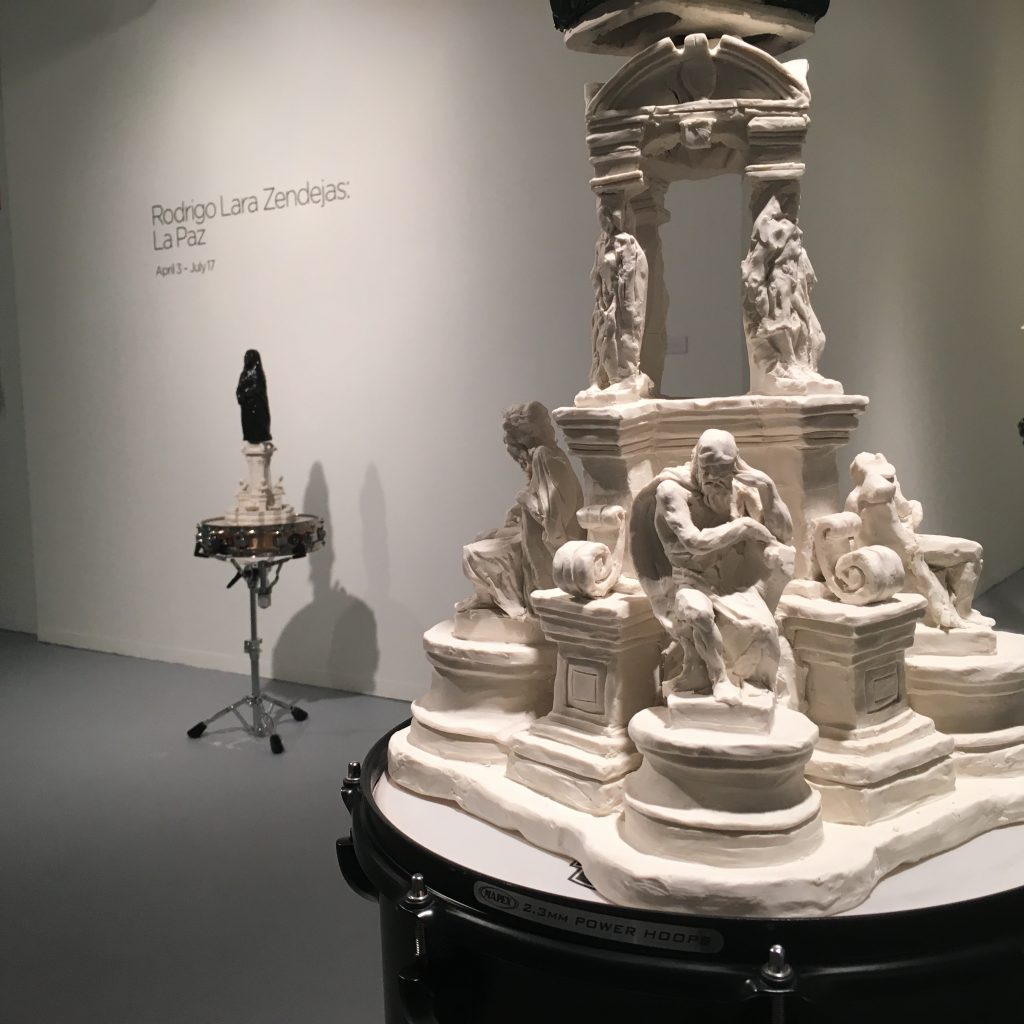 Although he is primarily known as a sculptor—Zendejas was trained in the classical tradition at Universidad de Guanajuato, San Miguel de Allende—his latest exhibition “La Paz,” currently on view at the Hyde Park Art Center, includes installation, sound and paintings alongside more familiar objects made from clay that reference many of the textures and scenarios that colored his childhood, including spending time in his grandparents’ backyard garden in Villa de La Paz, San Luis Potosí, Mexico. Found objects and pieces from a drum kit also feature prominently in the exhibition, a nod to the role of nostalgia in much of Zendejas’ work. “I was part of a band for seven years in Mexico, but at some point I had to decide either music or art,” he explains. “Both disciplines are quite jealous; they require all of your time and effort. I decided to go with art, but still I usually have a set of drums in my studio.” While music and sculpture, on the face, seem worlds apart, Zendejas makes compelling, physical connections between the two. When he sculpts, he sits on the same stool that he uses for playing the drums, and he often finds himself using a similar movement vocabulary with gestures ranging from fast and big to subtle and controlled. 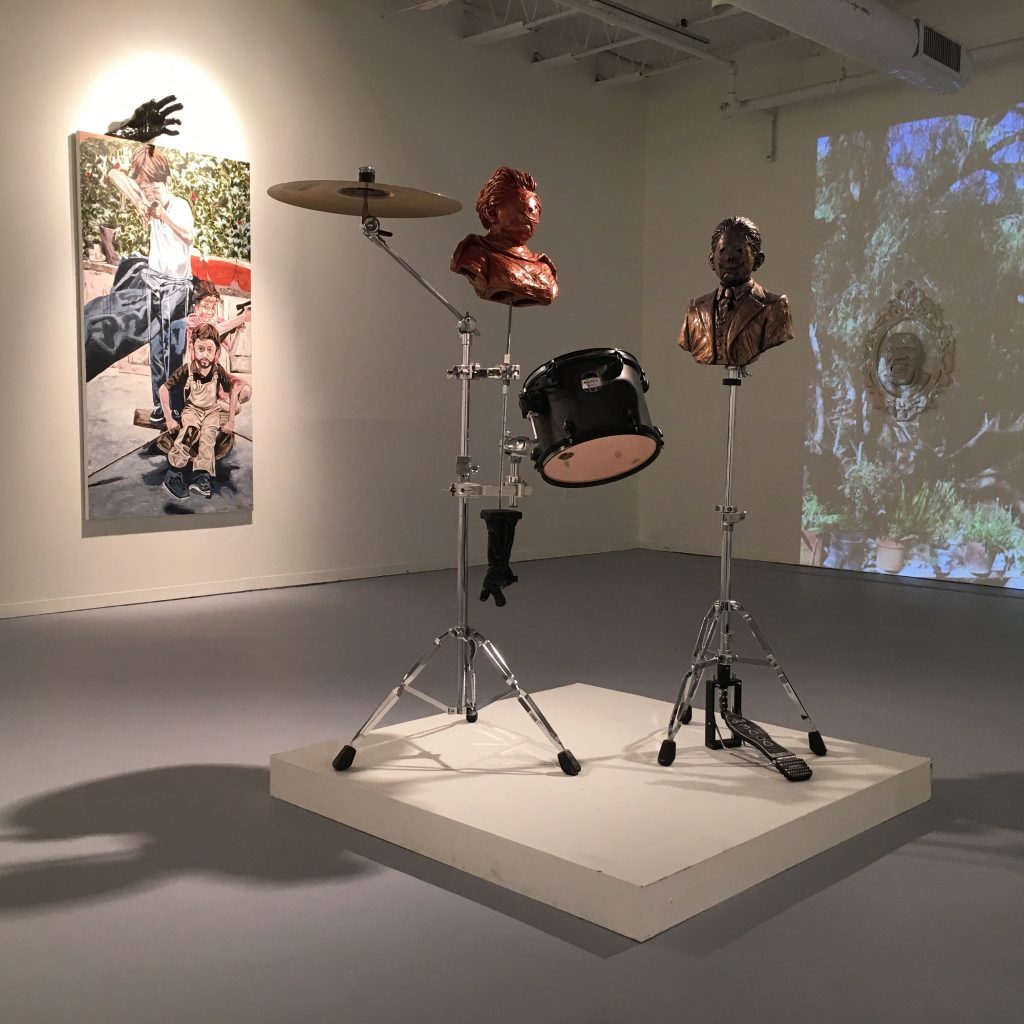 Unlike many artists who complete MFAs at top graduate schools, Zendejas made a conscious decision to stay in Chicago after earning his degree rather than heading to the coasts. He decided to apply for an artist visa and felt that it would be best to be in a place where he could achieve stability more quickly and focus on building a strong studio practice. Although he loves the community in Chicago and has found great success here, Zendejas remains committed to maintaining meaningful ties to Mexico where most of his family lives. His investment in Mexico has not gone unnoticed. In 2014, he was awarded the prestigious “Jóvenes Creadores” art prize, granted to four Mexican sculptors that year by Fondo Nacional para la Cultura y las Artes. He also keeps a studio and is exhibiting regularly throughout his home country. As for his work in the United States, Zendejas continues to forge steadily ahead. He will be part of a two-person exhibition resulting from his ACRE residency in May, and in October, he will be featured in a solo exhibition in the rural art mecca of Marfa, Texas as part of Chinati Weekend programming. In early 2017, he will present a reprise of his 6018North installation “Chapel,” originally shown at EXPO, this time at the DePaul Art Museum. (Lee Ann Norman)