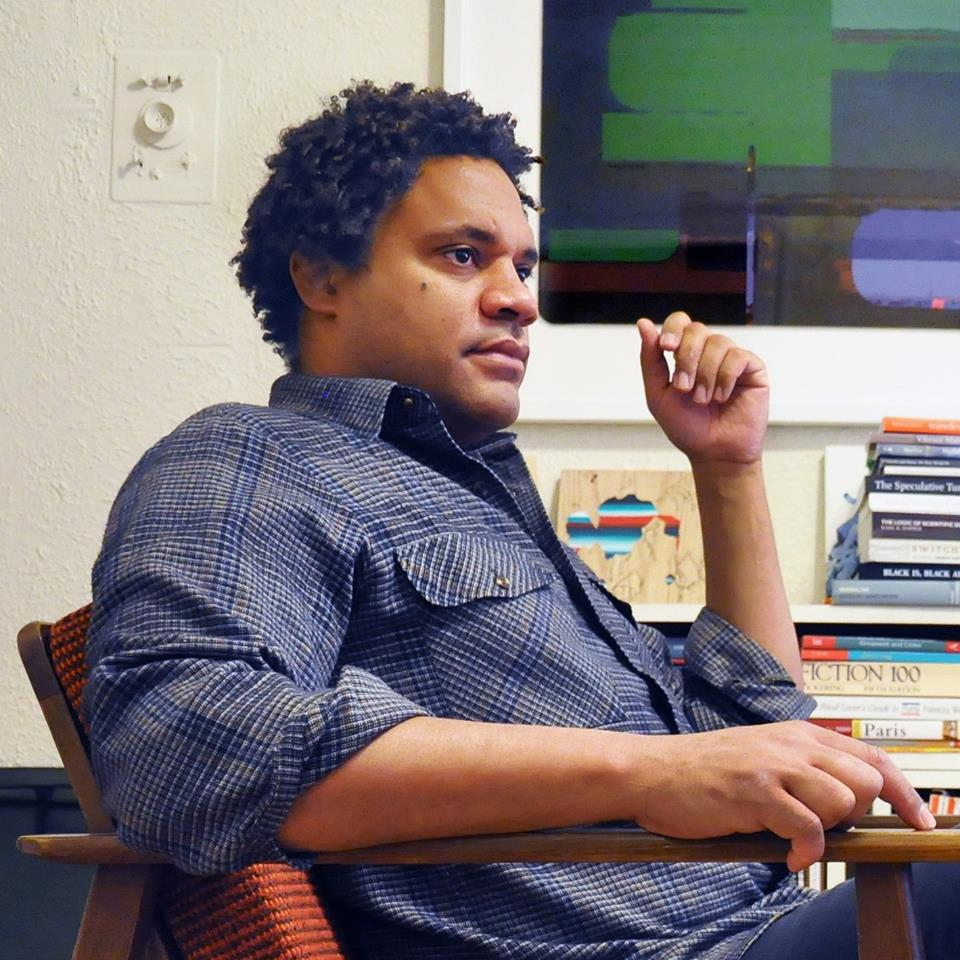 It’s been just four months since my last visit to Robert Burnier’s studio at Mana Contemporary, but as I walk through the doors I am astonished at the changes. Last time, we discussed his January show at Elastic Arts, viewed the several remaining “Burnier gray” sculptures that he left out of the exhibition, and looked forward at his then-newest work: two modestly scaled but brightly colored folded aluminum sculptures. Now, large sheets of paper are taped to the walls—atop the paper, three colored sculptures rotate around each other while the flaring reds, blues and yellows of the paper background blend into each other through soft, gradual gradients. Kissing the floor and climbing up the wall, the work fills Burnier’s formerly monochrome studio with fresh vibrations of chromatic energy. 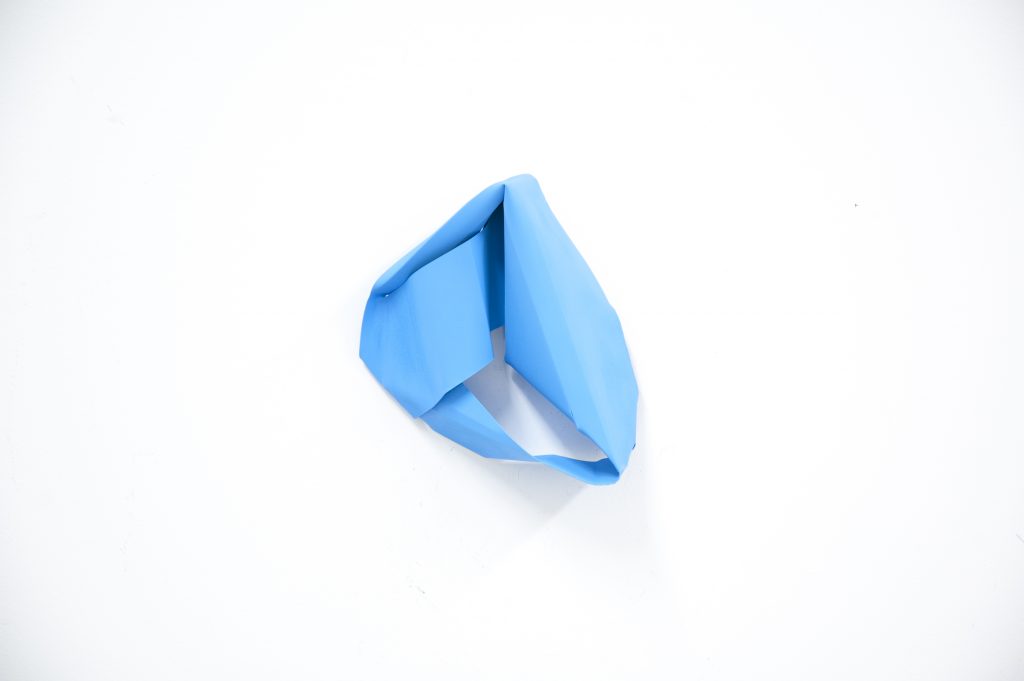 “For me right now, going into this color, I can’t just go part of the way. I have to go all the way,” he says as we settle in. “I don’t take decisions lightly on anything, so getting to this took awhile.” He takes a seat and leans easily back in it, interlacing his fingers behind his head. As an artist, a department specialist for Medieval through Modern European Painting and Sculpture at the Art Institute and an MFA Painting and Drawing candidate at SAIC, I wonder aloud how he has the time. Smiling, he tells me he’s excited to graduate this semester and that the colorful pieces in front of us are part of his thesis show. In addition to his MFA show this year, he’ll also exhibit in Elmhurst Art Museum’s New American Paintings Midwest Show, work on a spring curatorial fellowship with La Keisha Leek and have a solo show at Andrew Rafacz, which represents him.

Rising from his seat, he faces the bright wall. “When you look at one of these, you look within it to see its process of becoming. So this next move is to make you look between objects, to make you flutter and think about these relationships between them.” He’ll print the final version of the background on a tightly woven fabric whose surface will have a similar matte texture as that of the painted sculptures that dance and pivot atop it. “There is a contentiousness, a sort of near contradiction beginning to show and present itself in a really stark way. In the gray pieces, that was internalized—it was almost psychological internalization. With these, it’s just coming out, it’s manifesting.” His voice rises with excitement as he continues. “It makes sense to me. We’ll see who else they make sense to. But I had to. I had to do something like this.” 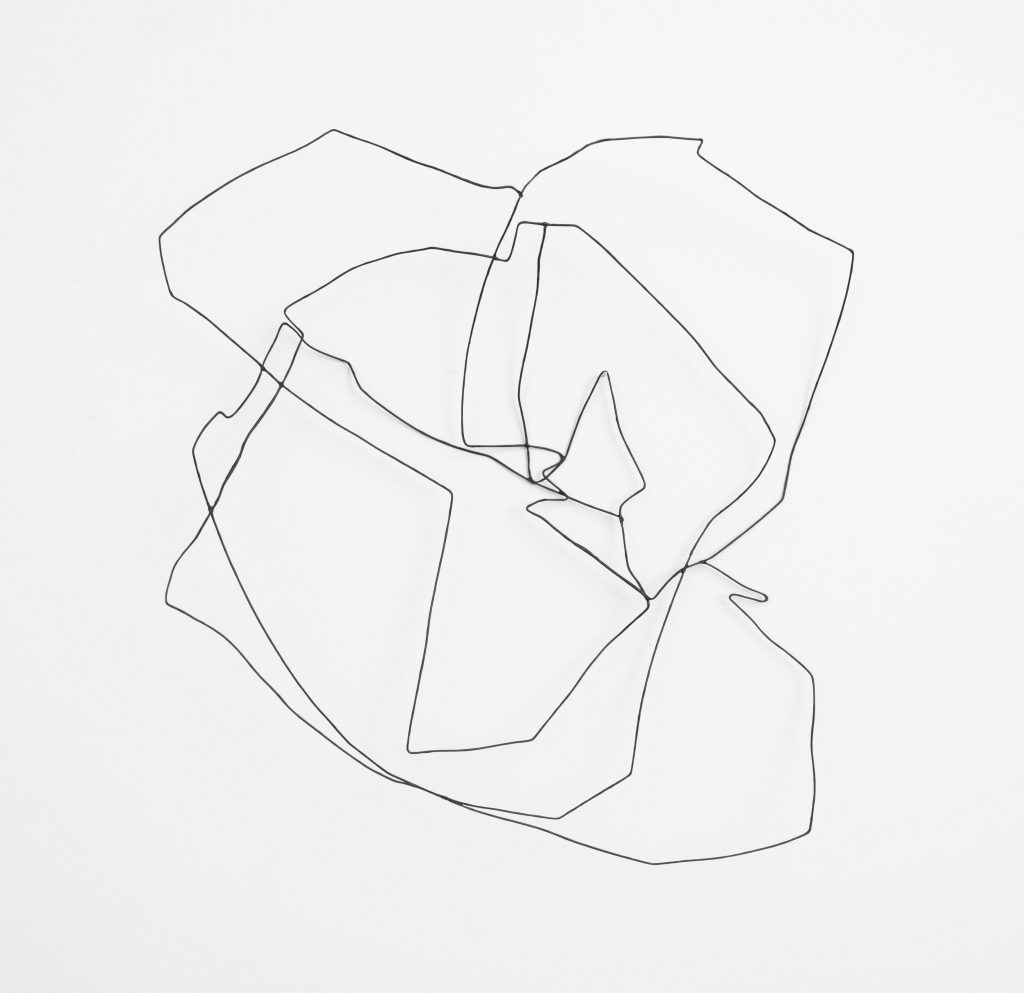 Previously known for his folded aluminum sculptures painted in “off-the-shelf grays,” Burnier’s introduction of extreme color reveals a new and incredibly dynamic layer of the work. “I want the art to continue to develop and unfold, within what it is,” he tells me, then looks back to the piece and smiles. “And I’m excited about those vibrations.” (Maria Girgenti)