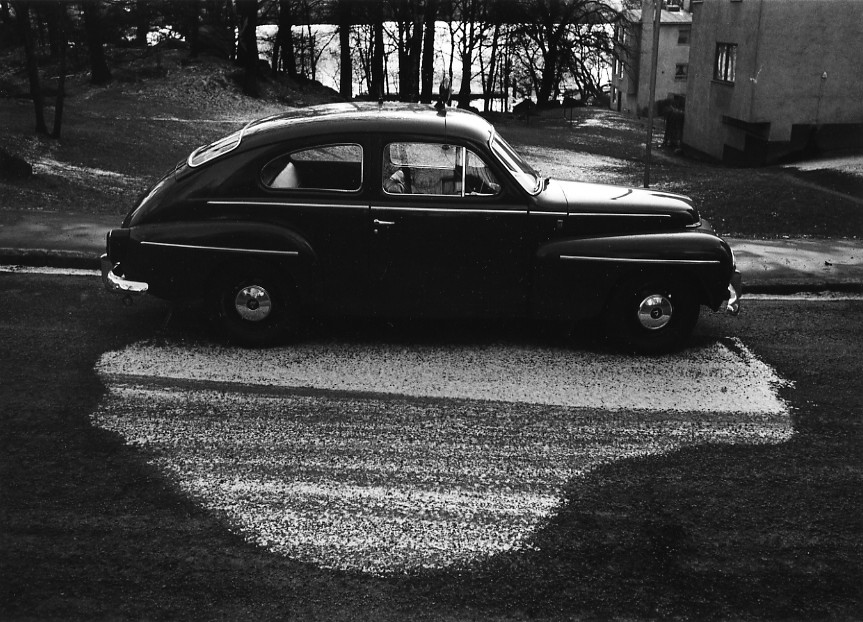 Kenneth Josephson (born 1932) is a Chicago treasure and an American master with stunning credentials in the history of photography. Hailing from Detroit, he studied at the Rochester Institute of Technology with Minor White. Later, he attended Chicago’s IIT Institute of Design, training under Harry Callahan and Aaron Siskind. Josephson himself taught for thirty-seven years at the School of the Art Institute of Chicago. Today he is best known for his Conceptualist “Images within Images,” pictures that show his own hand holding photos against a background, as in the well-known “Drottningholm, Sweden” and “New York State,” both of which are here. This lush exhibition admirably displays Josephson’s development across many different periods, styles and media.

Like so many photographers, Josephson has thought of his career in terms of place, his titles reflecting the cities or states where he was shooting. His early, gritty Rochester pictures are classics of straight photography. Multiple exposure images, the subject of his master’s thesis, appear elegant and effortless but were all made inside the camera. His abstract streets, trees and landscapes of the 1960s are lovely examples of the Institute of Design’s notion of graphically filling the frame. Seeing Josephson’s work in person reveals his obvious gifts for pictorial values and darkroom technique. Like other mid-century masters, he loved velvety blacks and gleaming highlights. A gorgeous photograph of three folding aluminum lawn chairs, their webbing and rounded tubing shining out against an inky background, recalls Joseph Kosuth’s Conceptual icon, “One and Three Chairs.”

Josephson’s photos are clever, but they have feeling too, as in his poignant images of his family, including those of his deceased son, Matthew. Josephson has always been intrigued by women’s bodies, posing them in impish and funky ways. A manipulated Polaroid of a nude in profile shows a color flame proudly emanating from the woman’s pelvis. Such surprises abound here, even for those who know his work. Overall, the quality and comprehensiveness of this show makes it one of the more important of the increasing exhibitions devoted to him. Josephson and his photographs certainly deserve the attention––and not just at arm’s length. (Mark Pohlad)

Through May 31 at Stephen Daiter Gallery, 230 West Superior