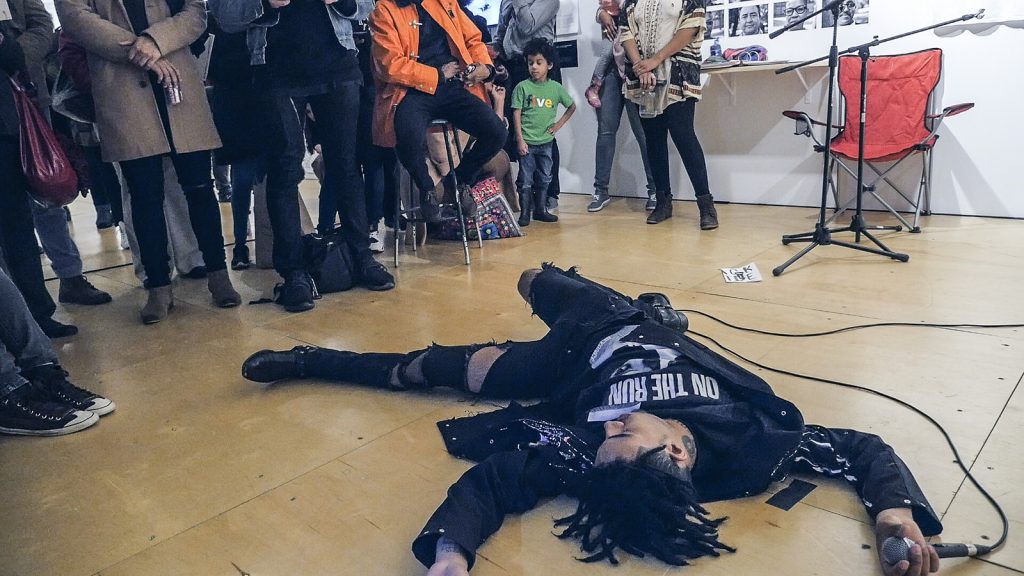 Vic Mensa performing at the opening night of “our duty to fight” at Gallery 400/Photo: Ji Yang

“It is our duty to fight for our freedom. It is our duty to win,” writes Assata Shakur in her autobiography. This exhibition runs with Shakur’s words, offering both a chilling view of police violence in our city and a vision of hope for the future. Organized by Black Lives Matter Chicago, the show’s main gallery displays documentation of several successful campaigns the movement has run in Chicago, from voting out State’s Attorney Anita Alvarez to helping to secure reparations for police torture victims. Three smaller rooms off this gallery are devoted to new artworks, most of them made in collaboration with families who have lost loved ones to state violence.

The idea for the show grew out of Gallery 400’s “Standard of Living” initiative, which aimed to create programming on the issues most pressing to Chicago residents. Part of this effort included inviting community organizations to use the gallery’s space to host meetings or other events. Gallery director Lorelei Stewart said the collaboration with Black Lives Matter Chicago grew naturally out of these relationships.

Communication between the two groups was sometimes “interrupted by activities in the city,” Stewart says. After the dash-cam video showing the fatal shooting of Laquan McDonald by Chicago Police officer Jason Van Dyke was released, for example, exhibition planning took a backseat.

“We had very little contact because they were all-in on organizing,” Stewart says. BLM protesters were highly active in the days and weeks following the video’s release, both locally and nationwide. One Chicago action took place on Black Friday, the busiest shopping day of the year, when hundreds of local activists blocked entrances to stores on the Magnificent Mile, stopping business-as-usual in the wake of the tragedy. 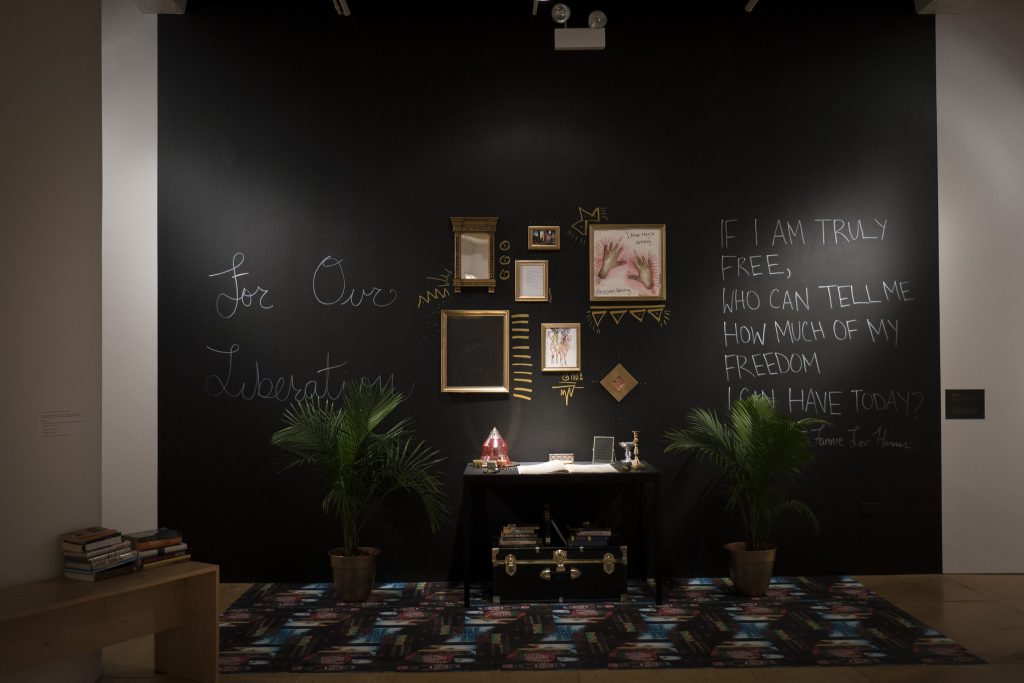 To be sure, “our duty to fight” is not the first to draw attention to the work of the most recent efforts for black liberation in this country, or to the horrors of police brutality. Last July, Bronzeville’s Gallery Guichard opened “Confronting Truths: Wake Up,” a solo show by the white artist Ti-Rock Moore. Controversy erupted over an installation in the show portraying the scene of Michael Brown’s death in Ferguson, Missouri. Similar ire was raised when Kenneth Goldsmith read Brown’s autopsy report aloud at Brown University last March, calling it “The Body of Michael Brown.” In contrast, David Hammons current retrospective at New York’s Mnuchin Gallery recalled Trayvon Martin’s untimely execution with “In the Hood,” which consists of a black hood severed from a sweatshirt hung on the gallery wall.

At Gallery 400, the curation was thoughtful and deliberate. All the artists in the show have been involved in political organizing in the city, either as protesters or organizers. “We wanted to be intentional about who we asked to participate in terms of artists collaborating with families,” Aislinn Borsini, BLM Chicago coordinator, says. “We’ve seen disastrous exhibitions in the past,” she says, citing the Gallery Guichard show, which did not involve Michael Brown’s family. “That was something that we did not want to replicate.”

Their intention pays off. A two-part work, “The Rise of Ronnieman,” by Shelby Stone, made in consultation with Dorothy Holmes, the mother to Ronald “Ronnieman” Johnson III, who was killed by CPD officer George Hernandez in 2014, is intensely powerful. A collage featuring red roses and images memorializing Johnson are centered with a black fist rising out of them. “Rise up Ronnieman,” it reads. To its left, a linocut bears a moving poem, contrasting the beauty of life with the rage left behind after Johnson’s death. 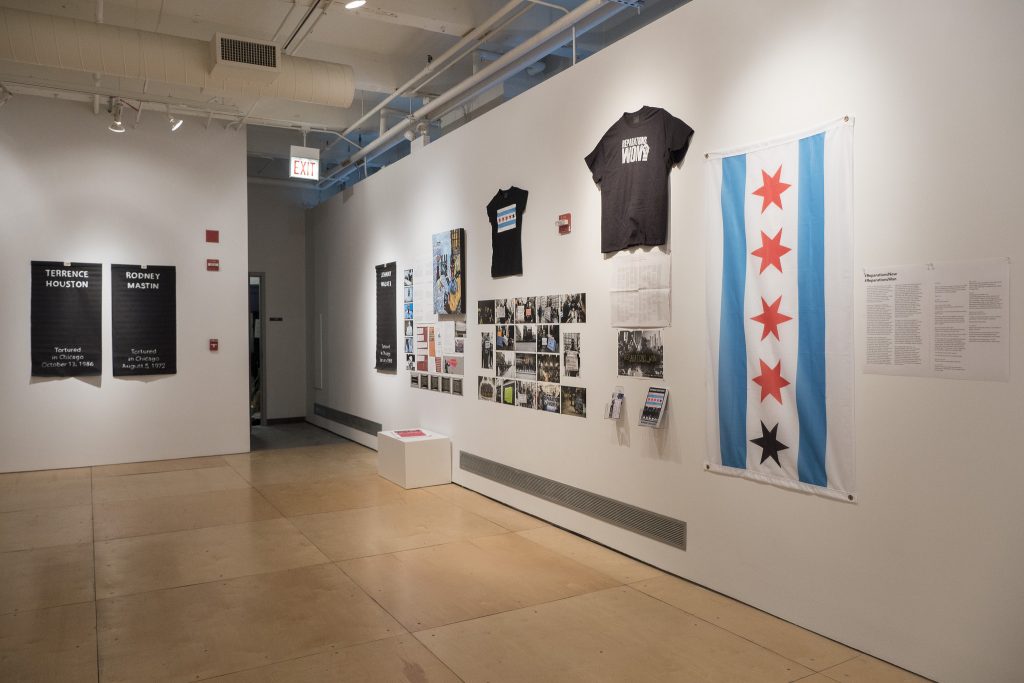 These works and their context envisage the humanity of the victims. Several family members were present at the April 27 opening reception. LaToya Howell, the mother of seventeen-year-old Justus Howell who was killed by a Zion police officer in 2015, thanked the crowd for their support. “A lot of people in the community of Zion, they don’t come out,” Howell said. “It means a lot that y’all are here.”

Lorelei Stewart acknowledges the exhibition holds different objectives for all the parties involved. “For BLM it is a call to action. I’m totally in support of that but also believe that the artists made incredible work,” she says. She also notes the importance of granting community organizations a chance to share their work. “These voices should be amplified.”

For Borsini, highlighting the successes of the movement is a major goal for the show. “While we are fighting these enormous situations that can feel extremely daunting it’s important for us to remember while we’re in those fights…that we can win and we do win,” she says.

“Art has a unique position to provide space to be very, very critical, very challenging to existing power dynamics,” Borsini says. “Art provides that opening, that space to really rigorously examine society as well as oneself.”

In her remarks at the opening, Borsini echoed the sentiments of Shakur. “This is about shining a light on the lives of all the people we have lost to police violence,” she said. “We aren’t responsible for these conditions, but we are responsible for our liberation.”