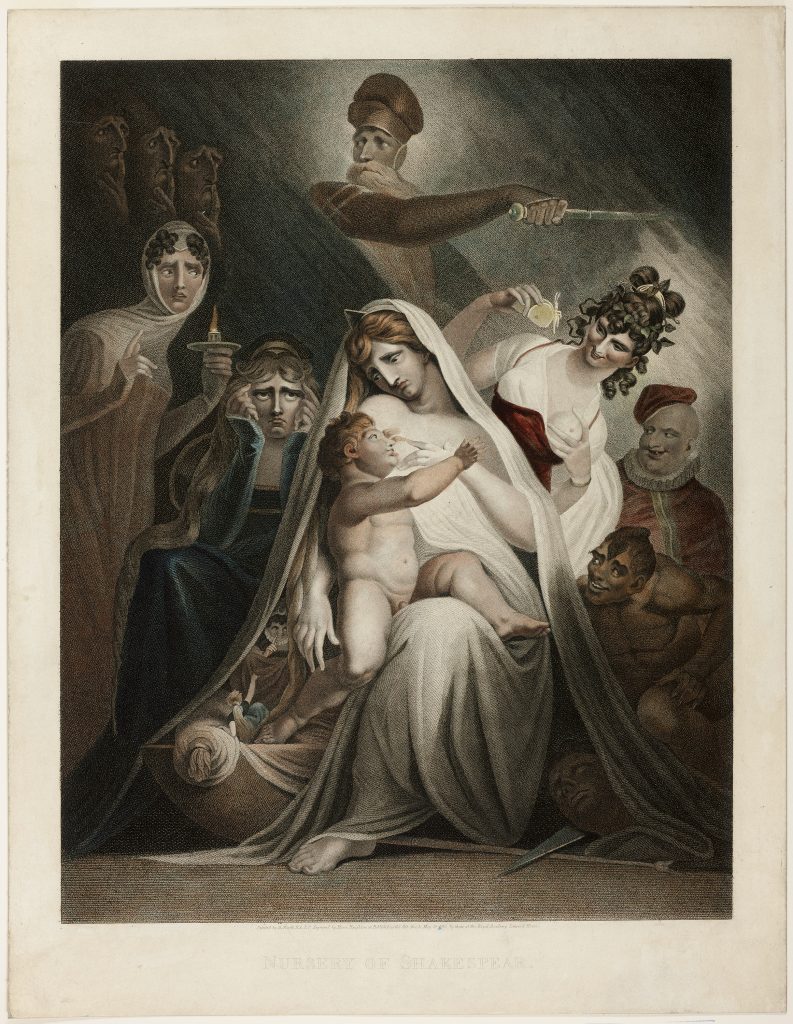 The four-hundredth anniversary of William Shakespeare’s death has seen an outpouring of commemorative efforts. This small show, comprised of three prints made after Henry Fuseli’s late eighteenth-century paintings, is the Art Institute’s contribution. They represent a particular moment of Shakespeare reception, a point where artists identified his proto-Romantic sensibilities and gravitated to the dark fantasies of “Macbeth” and “A Midsummer Night’s Dream.”

Moses Haughton II’s hand-colored engraving after “The Nursery of Shakespeare” represents the Bard as a babe suckling from Comedy and Tragedy, surrounded by famous characters from his plays. The engraver carries over Fuseli’s stilted figures and awkward composition, unlike Jean Pierre Simon’s slightly earlier engraving of Titania and Bottom. Here, Simon lends his figures a grace missing from the original. As Bottom touches his human hand to his ass’ head, the point where his finger meets the delicately rendered hairs of the snout signals a deep engagement with the matter of enchantment. In Shakespeare’s faeries, with their spells and changeable looks, artists found a way to think through vexing problems of representation.

On this score, James Caldwall’s engraving of the moment when the three witches appear to Macbeth and Banquo is a tour-de-force of shade and line; it cunningly conceals apparitions amid fine gradations of darkness. The curved lines of billowing fog echo the skull lying at Banquo’s feet. Arabesques of hair ripple from the crones, lending an otherworldly quality to their visages. It’s the show’s high point. If I have a gripe, it’s that a small, unrelated Goya canvas is squirreled away alongside the prints. I’d rather see Cornelis Saftleven’s spectacular rendering of a witches’ Sabbath (circa 1650), itself a unicum several galleries down, accompany these fantastic visions. (Luke Fidler)

Through October 10 at the Art Institute of Chicago, 111 South Michigan