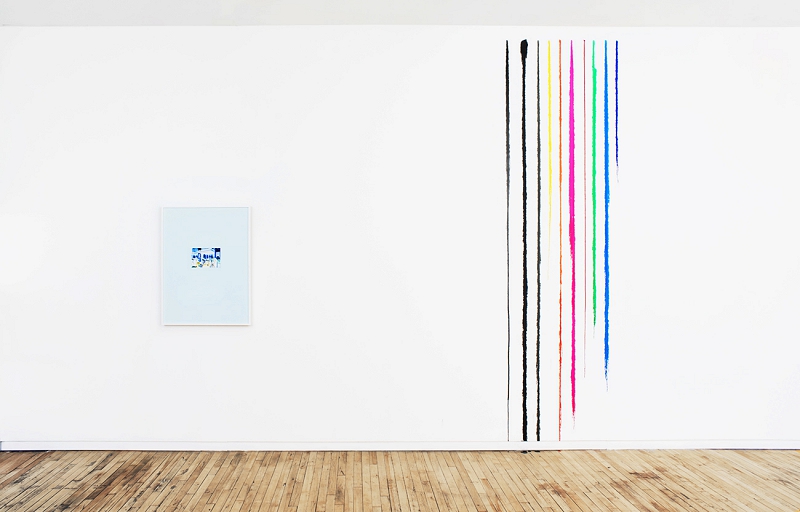 As the truism goes, you sometimes don’t know what you’re missing until you lose it. I’ve been feeling that often these days for reasons both personal and professional. Last week, I barely made it to Jason Lazarus’ exhibition at Andrew Rafacz Gallery before it closed over the weekend. A Chicago ex-pat best known for his “Too Hard to Keep” photography series of mailed-in photos from anonymous senders who could not bear to hold on to their most painful snapshots, Lazarus left us last year to take a professorship teaching photography at the University of South Florida. Months later, he converted his new garage into an exhibition space that has already hosted shows by the enigmatic Chicago collagist Thomas Kong and former Chicagoan Ben Fain, whose graphically oversaturated twenty-first-century masterworks are showing through early June at Iceberg Projects, Daniel Berger’s backyard gallery project in Rogers Park.

At Andrew Rafacz in the West Loop, Lazarus returned to Chicago with gestures new and old, including a continuation of his “ink pours” series. Along a pristine white wall, Lazarus poured the constituent ink pigments of eight images from history and art history in the precise ratio of quantities needed to print each on a modern inkjet system. The eight ink-trail images in this show included a Gordon Parks photograph of a department store in Alabama, a Walker Evans storefront photograph, and a still from Ramsey Orta’s video documentation of Eric Garner being choked to death by a police officer in front of a store in Staten Island, New York. From near the ceiling, the blacks, blues, magentas, greens, cyans and other elemental pigments dripped down obscenely. There was so much black that it spilled onto the floorboards.

Nearby, a framed, blue-toned photograph showed protesters blocking shoppers from entering the Niketown store on the Magnificent Mile on Black Friday, 2015, the day of a massive protest by the Chicago contingent of Black Lives Matter, momentarily shutting down commerce in the city’s busiest shopping district. Lazarus reversed the color tones in the image to produce a negative effect and a superimposed magenta dot served to focus the viewer’s gaze. After staring intently at this “afterimage,” you find the reverse—that is, the positive image—briefly burned inside your eyelid for a flickering moment, as if you’ve stared directly at the sun. Across the gallery, a string of bright white LEDs traced the edges of three rectangles, the shape of a storefront door flanked by two windows. Immediately and yet strangely familiar, these lights are a common attention-grabbing tactic of small businesses in Florida, Chicago and elsewhere. In the gallery, the blinding light of the LEDs appeared like periodic punctures in the wall through which sun shone brightly. And yet, the lights traced a form that was not present, the Tampa storefront on which the work is based. In this way, the LEDs referred to an absence in much the same way that a photograph presents a thing that is no longer there. In these works, Lazarus deploys dialectics of blindness and sight, visibility and invisibility, seeing and being seen with conceptual fluidity and formal elegance. The image, a material relic of fleeting light, becomes a cipher for all the things it reveals and conceals. A brilliant conversation between Lazarus and Newcity contributor Ruslana Lichtzier unfolds these themes and others in greater detail in a self-published PDF available online. 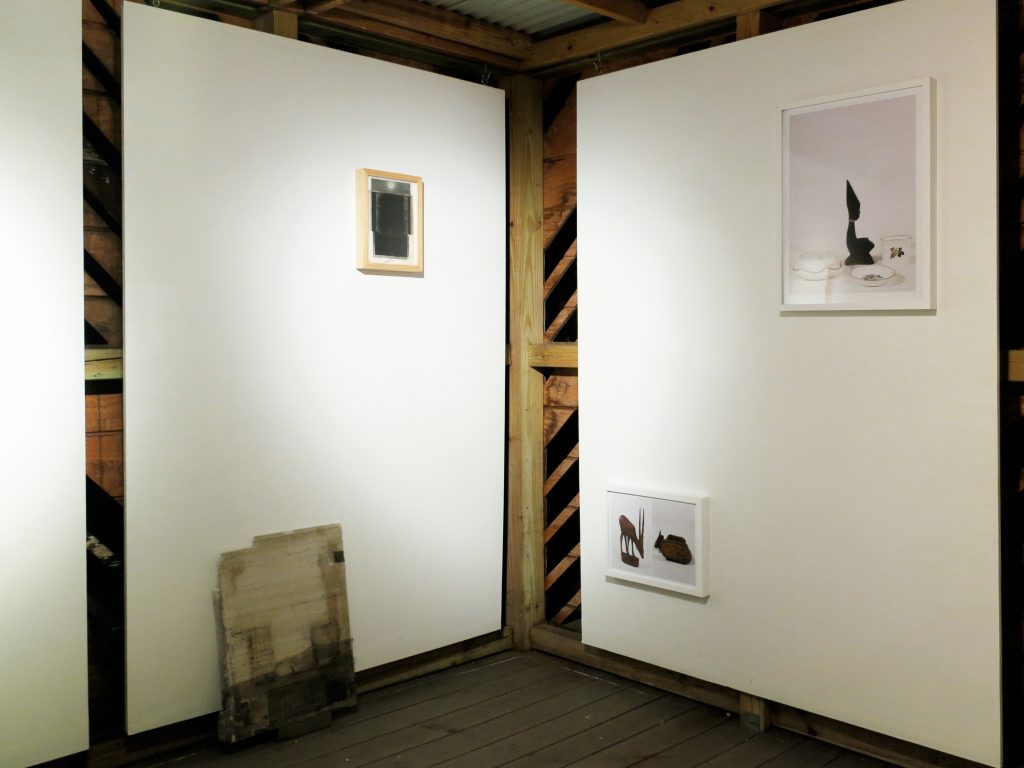 Although Chicago bade farewell to a great talent and generous mentor of its artist community when Lazarus left for the sunny skies of South Florida, it seems our dreary climes can still coax visitors from the South. In fact, a small crew of Miami-based artists recently came through to install a modest, captivating exhibition at The Franklin, the backyard, open-air gallery run by Edra Soto and Dan Sullivan. Miraculously, Soto convinced William Cordova, a multidisciplinary maker whose many laurels include works collected by the Whitney and the Guggenheim and co-curation of the upcoming Prospect New Orleans, to organize a compact show of works by Yanira Collado, Onajide Shabaka and Juana Valdes. If Lazarus’ work is about blinding appearance, Cordova’s “transmissions: algoritmos, polyrhythms, karuraqmi puririnay” draws you in with dense detail and indecipherable idiosyncrasy. Yanira Collado’s mixed-media palimpsests hint at text and image thwarted by overlays, whiteouts, fissures and seams. With careful meditation, a logic unfolds in each of two frames, but between them is a gaping void gasping to be bridged. Beneath them, a cast slab leans against the wall. A gauzy veil shrouds its lower half and covers a twiggy line drawing of a neoclassical temple, a ruin inscribed on the surface of its own debris.

Across the gallery, six collages by Onajide Shabaka speak a different tongue. Although they are chaotic in composition, the elements of these constructions fuse more seamlessly than those of Collado. In most of the works, a geometric form bisects the field vertically, organizing space and creating orientation like a totemic structure making order from the chaos of the cosmos. Two works are much less marshaled, disrupting the emerging logic and pushing away from an easy interpretation of Shabaka’s esoteric investigations in form. A video work, played on a small flatscreen mounted to the adjacent wall, pairs anonymous images of Florida swamps with a voiceover of an early twentieth century sheriff’s report of mysterious apparition in the bayou. At times, the spoken word seems to correspond with the picture, but the image eventually fails to deliver on the phantasmagoria described, and so a gap opens in the semiotic structure of the work. 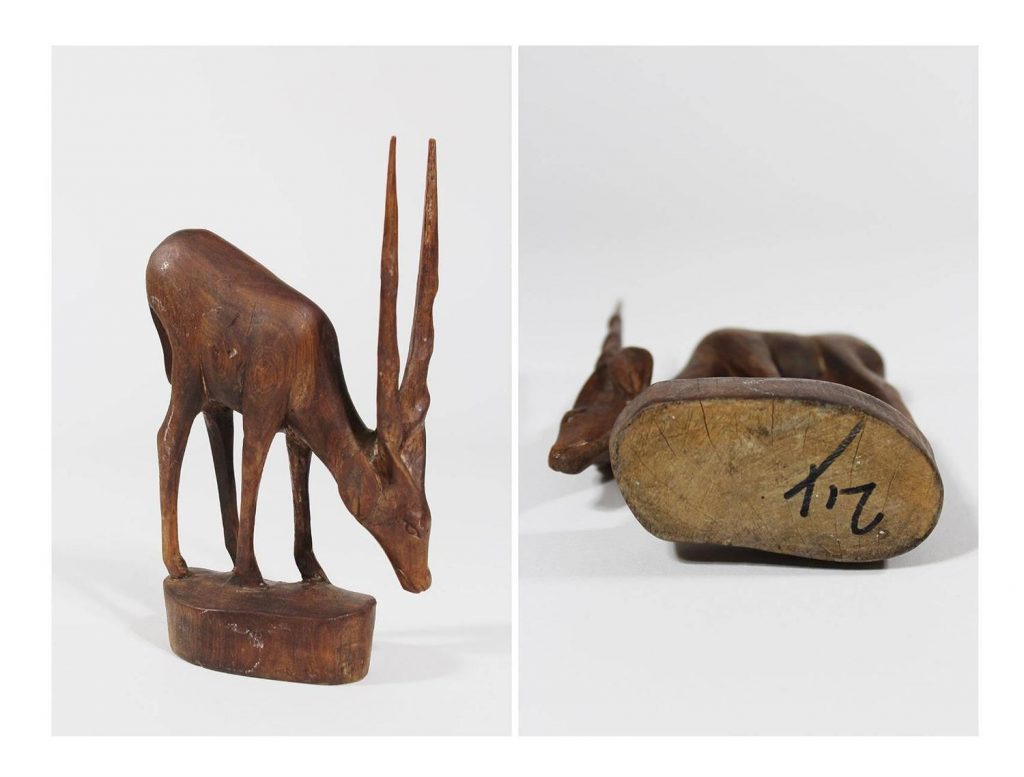 Between Collado and Shabaka, Juana Valdes’ crisp, large-format photographs of objects-cum-artifacts appear at first to be the most concrete images in the show. And yet, the inexplicable pairing of fine white china with an obsidian, Afro-Cuban figurine sits uneasily between still-life and object record. It is as if a museum curator grouped unlikely objects from an encyclopedic collection to show the absurdity of differences among manmade things. A second photograph shows a wood-carved gazelle in two frames, upright and on its side. On the underside of its base, an indecipherable scribble in permanent marker might be an inventory mark, a sign of private ownership or a note on where the thing was made, found or purchased. Decontextualized on a pure white backdrop, there is no way to understand the object or its mark. Perhaps the ethics of presentation are at stake, or perhaps the sculpture’s formal beauty is on display. Meaning is flighty and ever-shifting.

With density and nuance, Cordova’s exhibition rewards careful looking, so it’s a gift that Soto extended it through the end of June. At the very end of West Franklin Boulevard in Garfield Park, a trip to The Franklin is out of the way for many Chicagoans, but thankfully our Miami visitors seem to have brought the sun with them to make the trip more pleasant. Take advantage of it now, because you’ll miss it when it’s gone.