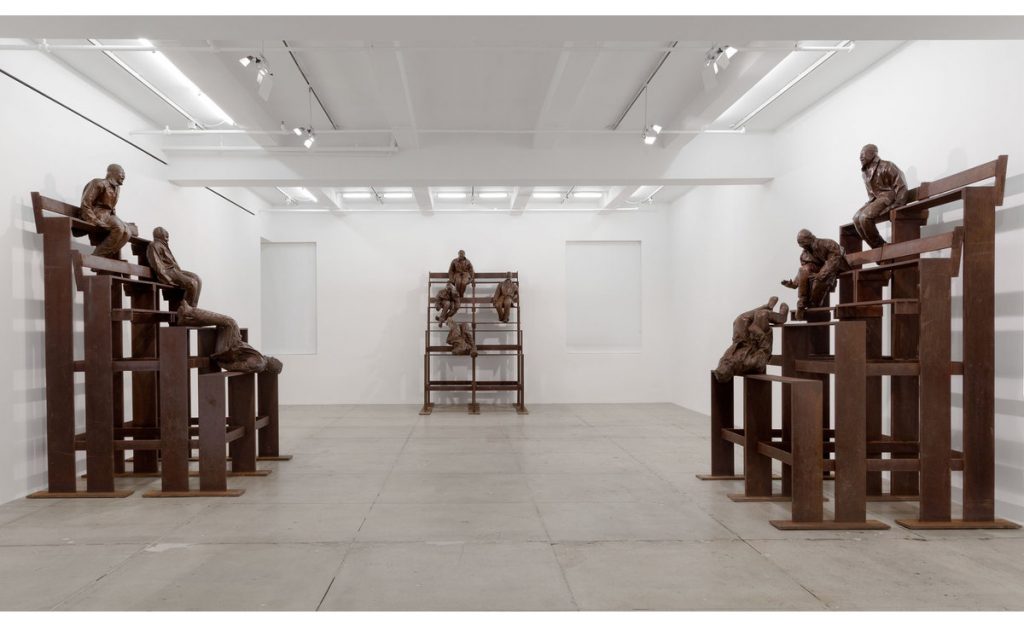 Figurative narratives have adorned architecture since the days of the Pyramids. Juan Muñoz (1953-2001) continued that tradition in this installation, “Thirteen Laughing at Each Other” (2001). Four steel risers are arranged as a mini-amphitheater. As they carefully measure vertical as well as horizontal space, it’s not surprising that Muñoz once studied architecture. The life-size figures that sit on them are no more naturalistic than needed to tell their story, uncluttered by the finicky detail that detracts from so much public, figural sculpture. The hands look like gloves, the limbs look like clothing stuffed with straw. But unlike historical installations, whether in European cathedrals or Asian temples, this story need not be presented as timeless or life-changing. It only need feel clever and provocative enough to fit into the world of contemporary art.

An interactive variation on his earlier work “Four Laughing at Each Other,” this was the last piece that Muñoz completed before his untimely death. The expanded configuration encourages visitors to step to the center and engage with the surrounding figures. When I visited, the Art Institute was thronged with visitors for the last few weeks of the van Gogh exhibit, yet I was alone when I walked out onto the Bluhm Family Terrace. It felt like all thirteen doll-like figures were laughing only at me, standing on the roof in the cold rain for no good reason. With so much else to see in the comfortable galleries below, why endure the foul weather for a piece that mockingly seems to say “Nothing matters, and so what if it did?”

The piece is aesthetically pleasant. The static, heavy, ominous emptiness of the steel risers contrasts with the dynamic arrangement of laughing dolls. Cast in stately bronze, they create a pattern of movement that tumbles from top to bottom. The expressive faces have been skillfully modeled to deliver their provocative message of nihilism with the elegance of elite cultural authority. Yet for some reason, everyone in the museum that day would much rather see the frantic personal affirmations of the crazy old Dutchman. And so would I. (Chris Miller)

Through October 6 at the Art Institute of Chicago, 111 South Michigan