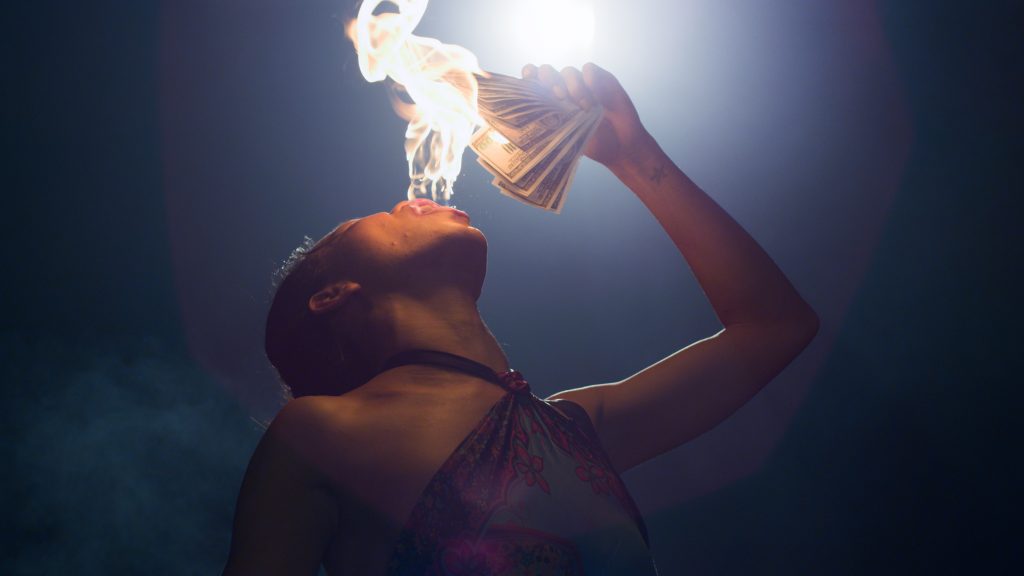 Last month, President Barack Obama quietly dismantled another vestige of the Cold War during a trip to Hanoi, where he formally rescinded the decades-long arms embargo against Vietnam. The gesture was meant to come as a reward in recognition of Vietnam’s improvements in human rights, but critics see it as a preemptive shield against conflicts with China and an increasingly aggressive North Korea, which completed another nuclear test at the start of this year. Ironically, several prominent Vietnamese human rights activists were barred from meeting with Obama just before he delivered the speech affirming Vietnam’s sovereignty against regional bullies. If the Cold War is over, something stranger and more menacing is taking shape in its place.

By its very nature, politics obfuscates intention and muddles meaning. Art, ever ambiguous, unfolds new possibilities in those gaps, and this is precisely what The Propeller Group offers at the Museum of Contemporary Art this summer. A collective of three artists—Phunam Thuc Ha, Matt Lucero and Tuan Andrew Nguyen—based in Los Angeles and Ho Chi Minh City (formerly Saigon), The Propeller Group embodies the living contradictions of a post-Cold-War world in which America sells arms to a communist Vietnam increasingly overtaken by the neoliberal order of global capitalism.

The exhibition opens with a puzzling tribute to our mixed-up times in an installation of flagpoles that nearly scrape the gallery ceiling, each topped with a wire-suspended flag frozen in picture-perfect billow. The banners are bright white and bear a central ring of nine interlocked crescents. Friendly and disarming, there is nonetheless something eerily familiar about the image, which trades on current sensibilities of corporate design to sell a patent contradiction—the product is Communism, an ideology based in opposition to the free market and its will to rule by the almighty dollar. The Propeller Group, acting under the auspices of their commercial outfit TGP, commissioned the hugely successful TBWAV/Vietnam advertising agency to produce the stylish, sleek update to the tarnished and dated doctrine. With wry irony, the collective points to the ideological defeat of communism by way of its self-refashioning as a capitalist concept. Lingering underneath the cheery smiles of the white-clad, multiethnic youth that raise the flag of the “New Communism” in a sixty-second commercial spot produced by TGP and their partner ad firm, the barely masked brotherhood of commercial advertising and political propaganda presents the avarice of the former as equal to the corruption of the later. Capitalism may have triumphed in the battle of wills, but with victory comes no moral high ground, so these images say. 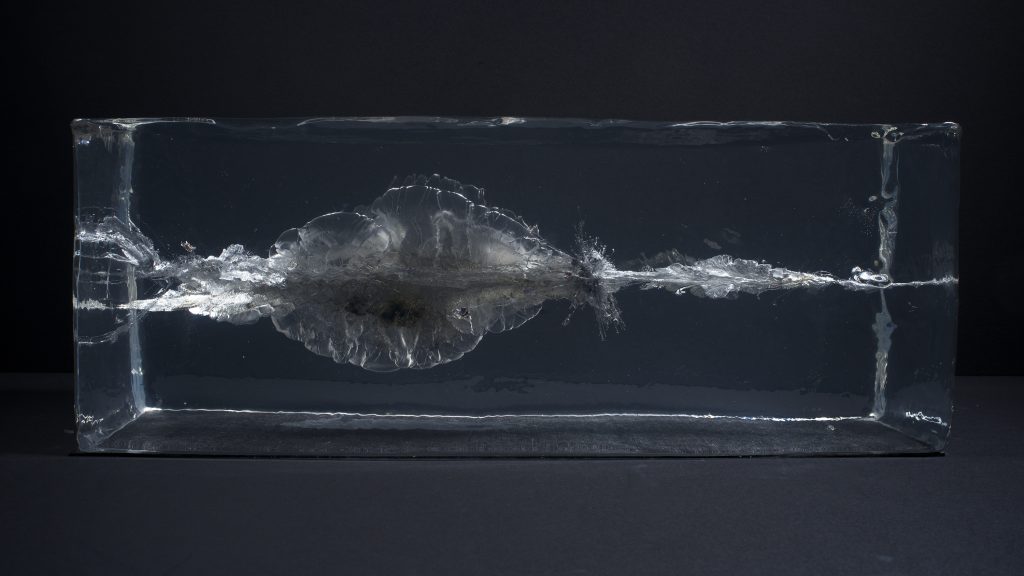 The Propeller Group’s joint practice as an artist collective and a commercial production firm is both practical and political. Their commercial work funds their art making and frees them to work more openly in a political regime that scrutinizes commerce much less than it does art, an irony that is not lost on the artists. Politically, they stand at the intersection of complex and self-contradictory social values, as Vietnamese aspirations for economic security and upward mobility clash with the communist party platform. As old as the Cold War, this confrontation is literalized in “AK-47 VS. M16,” a series of works that pit the emblematic firearms of the Soviet and American militaries against each other. In this installation, five oblong blocks of clear ballistics gel rest in a row of elegant vitrines. Lit from below, the gel holds the shrapnel of two bullets trapped in mid-collision, fired precisely at each other at exactly the same time. As dense as a human body, the clear gel is torn through with patterns that resemble the beautiful structures of fireworks and snowflakes. Notably, the AK-47 leaves a clean trail as it enters each block, while the M-16 wreaks havoc as it spirals forward, shedding shrapnel in all directions. A nearby video shows the bullets pummeling the blocks in captivating slow motion. Seductively, the gel undulates like soft flesh upon each impact.

Aestheticized violence demands questions of complicity, but The Propeller Group makes a compelling case for the import of their work as art. Another work also pairs a video document with a leftover object. A surveillance camera in a Saigon alley records thieves and scrappers stripping an unattended Honda motorbike of its parts, right down to the chassis. In front of the video are the remains of the bike itself, a fragmentary metal skeleton welded to a steel pallet base. A testimony to the particularities of Vietnam’s bike culture and its economies of repair and reuse, the video-object also affirms the cultural cachet of a commercial brand, a phenomenon that seems anathema to communist society from the standpoint of an outsider. But make no mistake, the work is a sculpture, not merely social commentary. Rendered by subtractive carving, the hands that made this work are many, but the method is as old as shaping marble into statues. 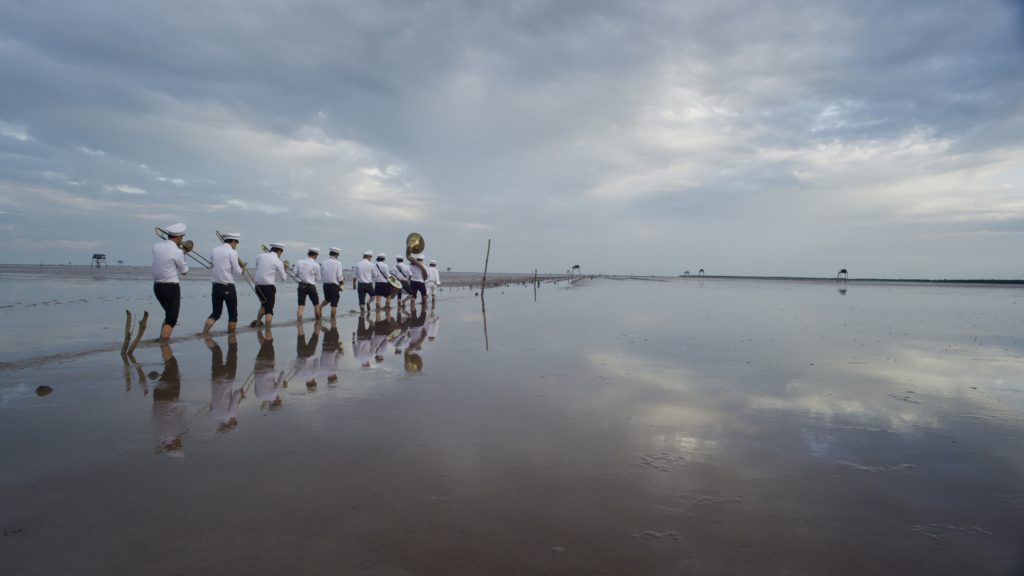 Historically, war makes death, and art honors death with beauty, making art and war strangely intimate bedfellows. “The Living Need Light, the Dead Need Music,” the culminating masterwork of the exhibition, celebrates the paradox of these affinities in a twenty-minute film of the ritual funerary celebrations in Ho Chi Minh City, which resemble New Orleans jazz funerals, complete with a uniform-clad marching brass band and a sword-swallowing, fire-breathing transgender dancer who leads the way toward our glorious end. The film moves from solemn poetry to bombastic celebration and then on to queer, uneasy silence, capturing the superstitious spirit of ritual in the richly colored, high-definition aesthetics of today’s top notch commercial music videos. The contradictions of life and death, communism and capitalism, are played out in the push and pull of form and content. Death, of course, wins in the end, making all those petty contests before it seem a bit meaningless, or at least dull, in contrast.

The trouble with video art—and this show is full of it—is the time it demands to watch. We humans tire easily from standing still and looking, especially in the uncomfortably pristine galleries of contemporary art museums. The Propeller Group presents no such problem. The works beckon with a whisper and a nod, and when a video ends you might find yourself lingering for a second go, and you should. The war is over, or so they say, and now we’re all just killing time until the bitter end. Enjoy this moment while it lasts.

The Propeller Group shows at the Museum of Contemporary Art, 220 East Chicago, through November 13.