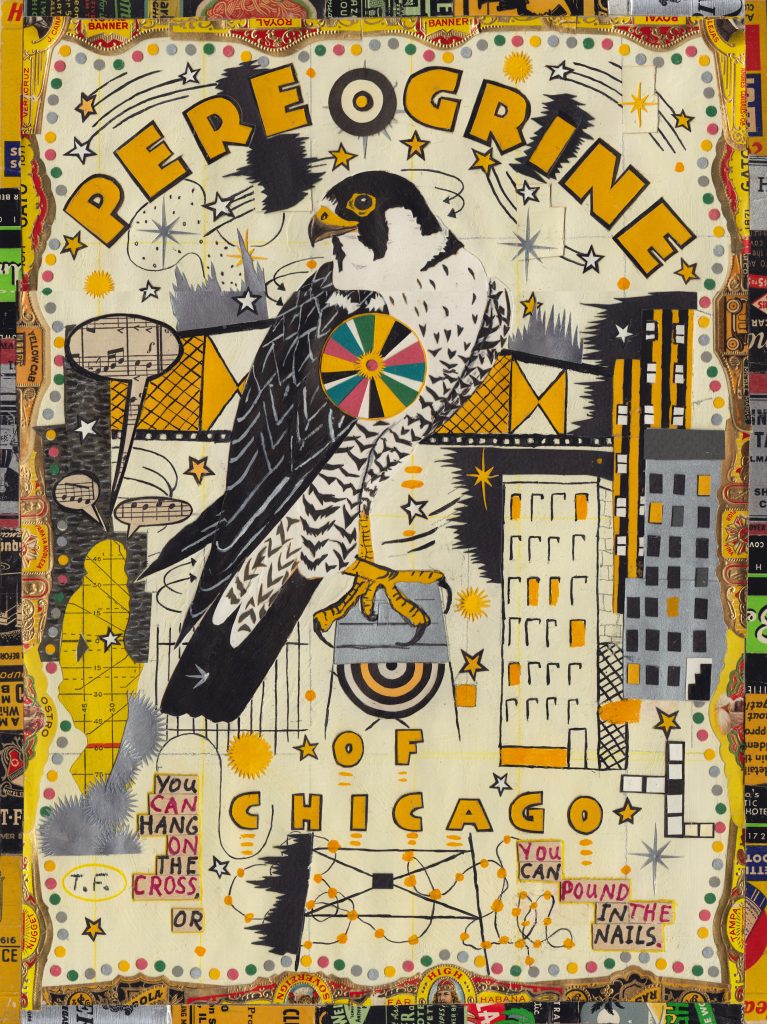 Tony Fitzpatrick makes popular art—or at least that’s what it would have been called back before the boundaries of that category faded in the postmodern era. With images lifted from commercial advertising and the blunt language of pulp fiction, he speaks to all who wage that daily struggle to keep head above water. A “secret bird” stands in the middle of each of these recent collages, and like a questing self, it responds to the world around it. Birds have often been important symbols to those concerned with the lonely journey of the soul; they can soar overhead and usually travel alone. In the twelfth century Sufi poem “Conference of the Birds,” each species exemplified a different challenge on the path to overcoming the Self. In contrast, Fitzpatrick’s art is a celebratory “song of myself,” and being self-centered, never lets go of childhood. Whether the subject is presented as the Lost Daughters of Juarez or the American Goldfinch, the idiom is so personal, the most apparent message is that Fitzpatrick is the coolest kid in school.

The background is stuffed with images from the mid-twentieth-century advertising with which he grew up. The commercial art of any era is not especially transcendent or progressive. It trades on stereotypes and elevates instant recognition above aesthetic or moral contemplation, and it specializes in nostalgia. Everything is less than how it appears. Unlike the bulk of popular visual art done today, Fitzpatrick’s world is neither rural nor red-state-conservative. He is nostalgic for the small, mean world of the city where, as the text in one piece tells us, “you can hang on the cross or you can pound in the nails.”

Each piece is a defiant, and often gorgeous, response to that situation. The overall color schemes are varied and decorative. The central figure is always a handsome, strong shape, while the background bustles with a variety of kinetic energies. Tony Fitzpatrick is indefatigable and that is the joy of his art. He makes you feel that today will be a good one, at least for you and him. (Chris Miller)

Through August 21 at the DePaul Art Museum, 935 West Fullerton