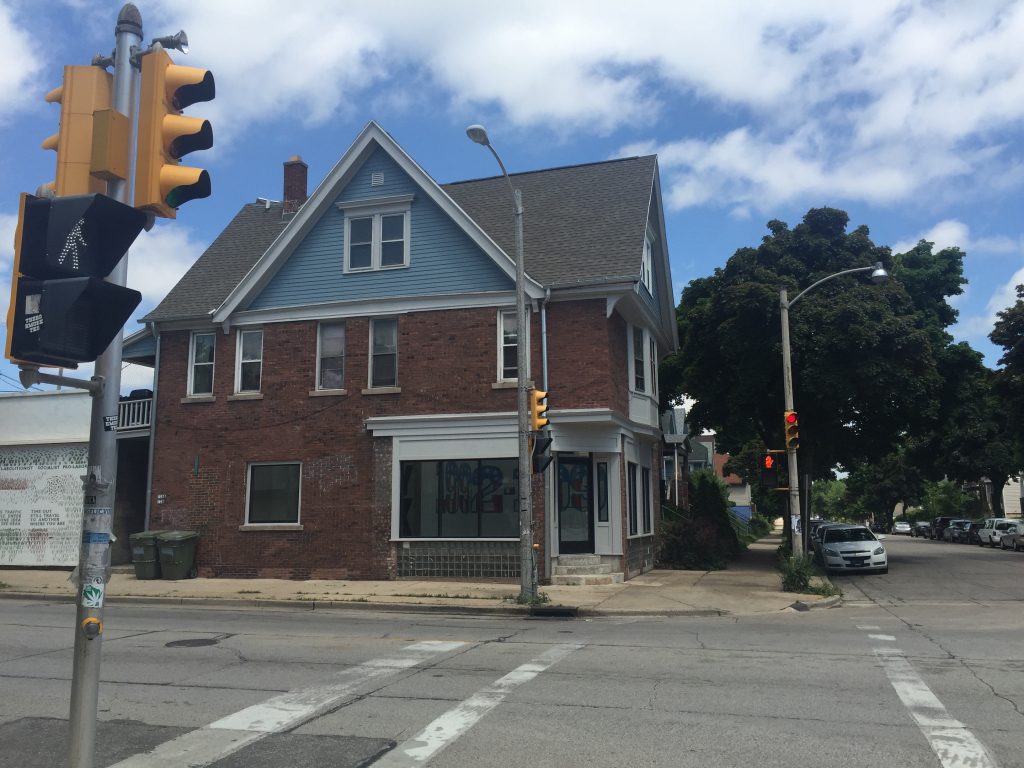 “We wanted to go undercover,” she told me on the phone.

A palpable sigh rippled through Chicago’s art world when the news broke that artists Michelle Grabner and Brad Killam were packing up and leaving. Coming off of a wave of high-profile attention capped by Grabner co-curating the prestigious Whitney Biennial in 2014, the artist couple’s departure might have felt like a familiar move. For decades, many of the most talented and successful artists have tended to abandon Chicago for the hustle of Los Angeles or the bustle of New York. But always unorthodox, Grabner and Killam went to Milwaukee instead, taking with them the Suburban, the exhibition space they had been running in a small concrete structure next to the garage of their Oak Park house since 1999.

True to its tongue-in-cheek moniker, the Suburban in Oak Park, Illinois eschewed the pretensions of the cosmopolitan art world even as it defied the stereotypical provincialism of the Midwest. Few spaces could boast the quality and variety of the artists shown there, or the experimental caliber of their exhibitions. Their secret was no secret: beyond the limits of the gallery’s tiny footprint, the artists who were invited to show there had few, if any, constraints. This kind of challenging freedom unleashes the best in the best—for proof, a single, enigmatic painting by Luc Tuymans or an elegant design of painter’s tape on the structure’s windows by the recently passed Tony Feher. Selected by Grabner and Killam themselves, the roster mixed the most impressive of today’s international avant-garde (some of whom happen to reside in Chicago and vicinity) with the brilliant, sometimes obscure artists of the region and elsewhere. And yet, there was nothing regional about the Suburban, and the friction of this irony played out in every backyard opening, pancake breakfast with an artist-in-residence, and homemade dinner after a long day of installing a show. The Suburban was something between an international residency, an apartment gallery, a family commune and an art world destination—actually, it was all of the above.

So, why leave idyllic Oak Park? And if so, why go to Milwaukee? According to Grabner, the move up north was a homecoming. Born and raised in Wisconsin, she studied art at the University of Wisconsin-Milwaukee and taught there after earning her MFA at Northwestern University. Coming to Chicago from Wisconsin in the late 1990s, Grabner and Killam found an art scene still relatively small and centralized around a few big museums and a commercial gallery or two. Fast forward almost twenty years and things have changed significantly in terms of museum and gallery support of contemporary work and local discourse. In the fine grain, the situation has gone up and down, but overall we’re in a better place than we were in 1999, and we have the Suburban in part to thank for supporting that growth. The confusing thing is what’s implied by Grabner’s and Killam’s trajectory: Is suburban Chicago more or less provincial than urban Milwaukee? 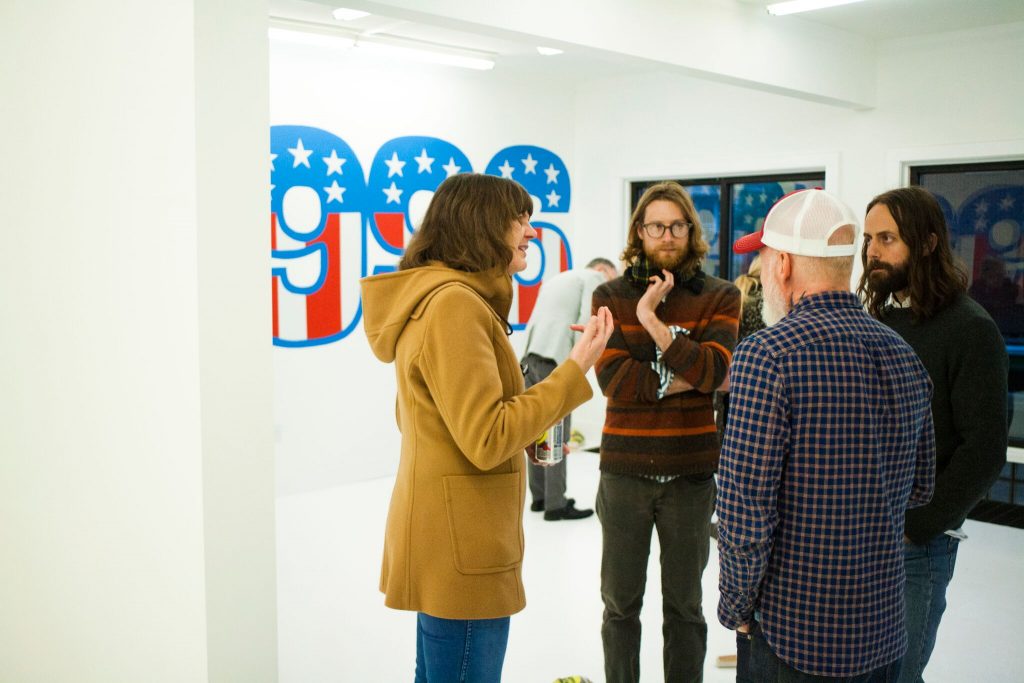 To answer this question and many more, I paid a visit to the Suburban’s two, new Milwaukee sites on a beautiful summer day in June. My host, Alexander Herzog, the Suburban’s director and a skilled painter in his own right, kept me company and showed me around town, starting with the charming neighborhood of Riverwest, where the Suburban’s primary Milwaukee location stands inside a former laundromat. Somewhere between working class and something else, Riverwest hosts scenic streets of bungalows and single-family houses with a smattering of co-ops, coffee shops and bookshops. For a hardened Chicagoan, this place feels a bit like paradise. Indeed, it is a tad suburban compared to Chicago’s mean streets, if not also denser than its suburbs. In a word, it’s a contradiction at every level—somehow both more interesting and more pleasant than much of our city and its environs.

Although Grabner and Killam still select the artists who show at the Suburban Riverwest, Grabner admits that when she asked Herzog and his wife Rose DiSalvo, also a painter, to leave Chicago to manage the space, she had to let go of the day-to-day. When I visited, an installation by Jack Early sprawled over the light-filled galleries—soft form sculptures depicting PBR cans and smoldering cigarettes, massive hand-painted lettering announcing a long-defunct early nineties rock band called “Happy Jack” and an audio clip of the band’s only recorded rehearsal. Herzog fills me in on the backstory: After Early was ostracized from the New York art world because of a New York gallery show he made with collaborator Rob Pruitt that was widely deemed “racist,” he played in a band for a few years. They only recorded one session, the tape of which was playing in the gallery. They only had one show and they broke up the next day. A replica of their poster for that gig hangs in a back nook in the space, and a cooler of “Happy Jack” modified PBRs is tucked away in the bathroom for surreptitious consumption.

“I still teach that,” Grabner tells me later about the Pruitt-Early controversy. Among the many incredible things about her practice as artist and curator is how she mobilizes her knowledge of art and art history to new, generative ends. Anyone can teach an important gallery show controversy to their class, but how many artists can ask that artist to make new work, and for a show in Milwaukee to boot? In a few words, that has always been the spirit of the Suburban: making it happen where it seems like it couldn’t.

Milwaukee is immanently livable compared to Chicago, as Herzog shows me on our day-long trip and as Grabner emphasizes on the phone. According to her, a full day’s work in the studio is something you can get done in here, with its lack of distractions and its ease of transit. Indeed, at a second site in the Walker’s Point neighborhood, Grabner and Killam have their studios in the back of a very small, very defunct storefront that might have previously sold insurance or firearms, but now shows art as a Suburban satellite space. When I visited, the works on display were small versions of Chicago-based Tony Tasset’s paintings made from commercial products smeared and dripped over canvases and then sealed in resin. In one, a can of sickly orange pumpkin pie filling is daubed around a pink field made by a bottle of Pepto-Bismol spilled all over the corner of the canvas. Mustard, margarine and marshmallow fluff are among the many more products that make up the works, which I had first seen in their larger versions at Kavi Gupta in Chicago. In that white cube context, these compositions had felt almost cynical, like a suite of bad jokes lampooning the art world’s poor taste. Here, they appear much more thoughtful and earnest—a true exploration of the artistic potential of our everyday lives, much like the Suburban itself. 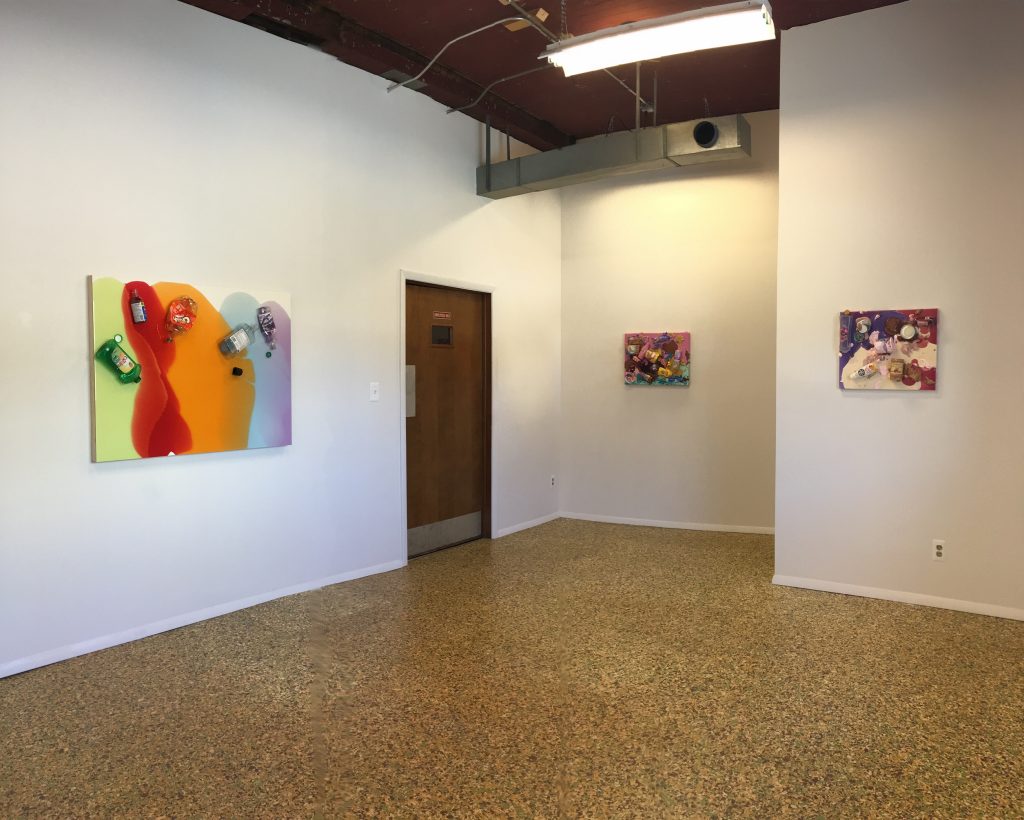 As one would expect, reception to their move has been mixed. Many are happy to see the infusion of new blood that the Suburban brings to Milwaukee’s sleepy scene. Others seem to take Grabner and Killam as carpetbaggers from the big city. At their Riverwest spot, in a neighborhood that seems more at ease in its mixed-income status than any gentrifying neighborhood that I’ve seen in Chicago, a dissenter sprayed “Anything But An Art Gallery” in purple paint on the sidewalk just outside. Ironically, the Suburban’s ethos is anything but the kind of stuff you would expect from a gallery on the urban frontier of gentrification. No doubt, the Suburban will prove that over time.

On the phone, Grabner has nothing but praise and enthusiasm for Milwaukee. She even cites the distance from Chicago as being part of a newfound appreciation for that city, to which she commutes to teach at SAIC on certain weekdays. Herzog, who also serves as her studio assistant, also makes the trip down once a week to teach at the school. In a sense, the Suburban is truer now to its name, further flung from Chicago but somehow more accessible than ever before. Which begs the question: if Chicago’s art scene is big enough to spill over into Milwaukee, has it finally made it, or is the north a new front in its fight to stay relevant?

What’s most unfortunate about this piece of writing isn’t
just the fact that it’s scooping a story already a year old, or the complete
unfamiliarity with Grabner’s long history of work in Wisconsin, but the
douche-chilling pomposity that imagines Chicago at the center of a regional art
scene. Please Elliot, tell us more about “Chicago’s mean streets”. And please,
continue to put “racist” in in between those conspicuous scare quotes.

So what is your nominee for the center of the midwest art scene, Mr. Fiore? Or is there no such thing, in your opinion? Also, I’m not sure if you would rather have the writer take away the quotes around “racist” — thus elevating an opinion into established fact, or making it into the actual opinion of the writer — or simply omit the history all together. Can you please clarify?

I mean, of course there is no center. If you’re looking for high-density resources and high-density population, why stop at Chicago and not just head for the coasts? The idea that Milwaukee is somehow benefiting from Chicago’s “spill over” is ridiculous–my understanding is that Grabner chose to leave because Milwaukee is better suited to her goals.

As far as the scare quotes, it seems pretty clear that their use here (as in most cases) has more to do with interjecting a bit of sarcasm than anything else.

It still seems there are places contemporary artistic culture is more active. Milwaukee is certainly one of them. Whether Grabner’s presence in Milwaukee is “spillover” from Chicago or vice versa is a fair question. I’d accept the latter, though she has interacted extensively with Chicago in her life, education and career. If not there then some other place where the action is.

I’m glad Milwaukee is there. I like the town and the art going on there is good. It’s why I even read the piece.

On the sarcasm, I didn’t read it that way initially and still don’t.

Hi Brad, thanks for your interest in the piece. I’m a bit confused by your negative response, not because I can’t take criticism, but for the content of your objections. The story, which I wrote for Newcity’s thematic issue on Milwaukee, clearly explains itself as an update on the Suburban’s move to Milwaukee after nearly a year. The prologue of the article provides the necessary background information for those who aren’t aware of the Suburban or its history. In that sense, it’s not meant to “scoop” an old story, but to provide context for a general readership. Unlike some art… Read more »

Listen, I hear you. As an arts writer myself I often find myself wanting to explain how clear and well-composed my writing is to those who disagree with me.

Grabner has made a move that clearly suits her, but something about the whole “Suburban” enterprise makes me bristle. Grabner has for years complained about Chicago’s supposed “provincialism” but all I can see in her work or in her practice is a reinforcement of that same “provincialism.” I never saw her at art openings, and have asked many gallery owners if she ever once walked through the door, and the answer was always no. Complaining about a city’s supposed deficiencies is one thing, but not lifting a finger to participate in, or to elevate the city’s art scene, short of… Read more »