Compared with similar surveys of emerging artists, the Elmhurst Art Museum’s display of the “New American Paintings” contest looks pretty good. It is less conceptual than the revived “Chicago & Vicinity Show” and less attached to the feverish world of art school than the National Wet Paint MFA Biennial. In the best of them, like Debra Smith’s “Shifting Territory,” you feel you have met a strong, sensitive and well-educated person who is leading a buoyant, productive life. Although it seems two-thirds of the participating artists got an MFA in the last ten years, the contest was open to everyone, and Smith is older and without that degree. One might also note that her work does not “involve the activity of painting,” which is how the contest website defined its parameters. It was delightful to see what she did with pieced vintage silk, but if I were a competitor out fifty bucks, I might be concerned about contest administrators who don’t enforce their own rules.

Born in the same year that the above artist graduated college, Alex Jackson is among the youngest and most promising artists in the show. Belonging to both the African and South Asian diasporas, he paints baby Krishna, the butter thief, as equally cute and disturbing–with alternating Afro-black and Krishna-blue stripes. It is a memorable image. 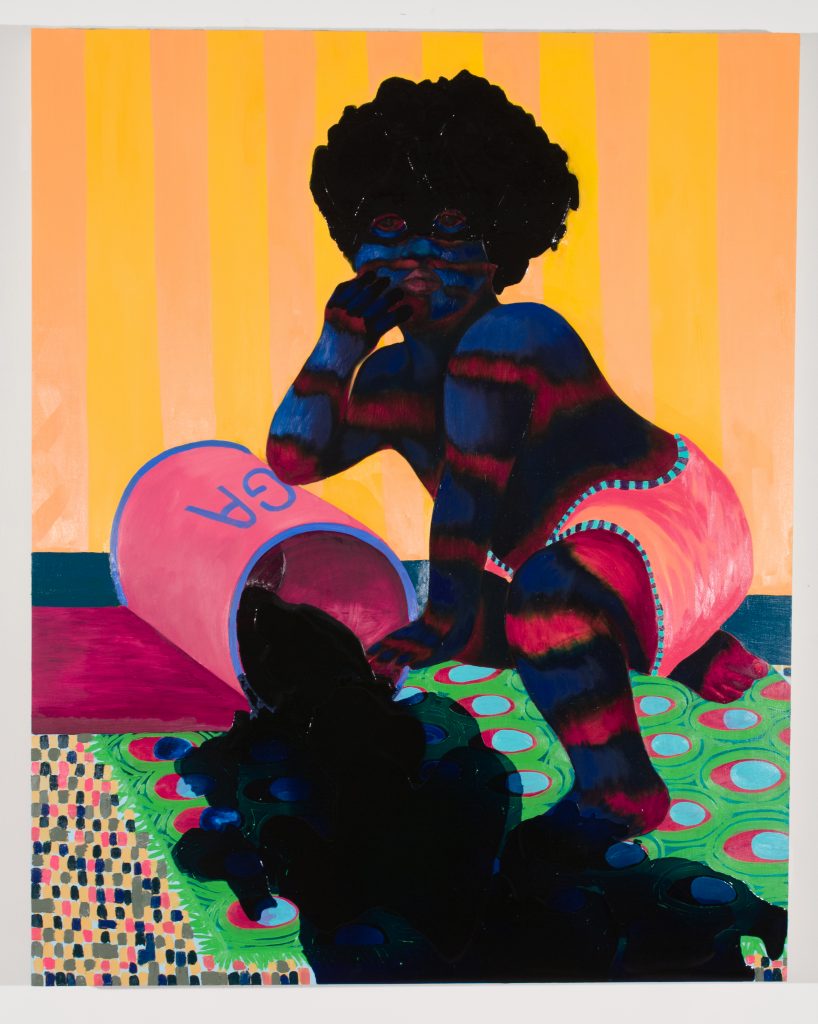 As a forty-two-year-old, self-taught artist, David Rettker is also far from the demographic norm of the contestants and that might explain why he is the only artist who celebrates either the city or the countryside as beautiful places. If other cityscapes were hanging nearby, one might better appreciate how his aerial view of Chicago’s urban canyons borders on fantasy. The diversity of this contest offers exposure to (and collects fees from) a wide variety of participants, but it does not facilitate understanding or cultivate excellence in any one genre of painting. In the twenty-three years “New American Paintings” has been running contests, the entire roster of winning entries was never given gallery display until the Elmhurst Art Museum began to show them in 2015. Perhaps a better response would be to give solo exhibitions to a chosen few—there are many deserving artists here. (Chris Miller)