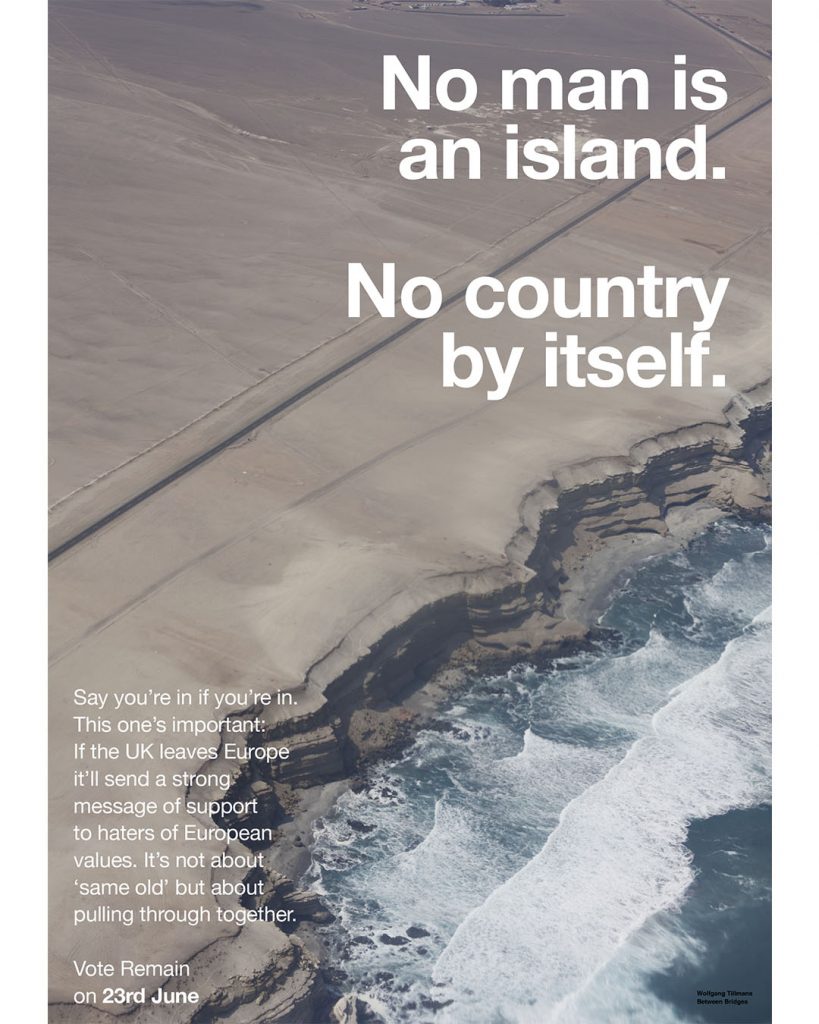 The two most significant works of Brexit Art were a set of posters and a decorated truck.

The first was “Between Bridges” by the German photographer Wolfgang Tillmans, consisting of thirty vertical, anti-Brexit posters. Each poster, available on the artist’s website as a PDF file, combines “Remain” texts and slogans atop a monochrome or photographic field. In most cases, the photos show a section of land and sky with the horizon in the middle.

The combination of words and images are alternately imploring and didactic. Sometimes they are touchy-feely. One reads: “It’s a question of where you feel you belong. We are the European family.” The text floats in a pale blue sky over a desert landscape. Another says: “What is lost is lost forever.” The image here is nearly abstract: blue above the horizon and sunset-lavender below. In still another, Tillmans superimposed his text on an aerial photograph of waves crashing against a jagged coastline. It reads: “No man is an island. No country by itself.”

The analogy is false. While individuals cannot long survive in isolation, a country is by definition a large group of people cooperating in certain ways: for example by sharing a common language and currency. A country may or may not choose to join into alliance with others. If it does, it embraces globalization; if it doesn’t, that’s autarchy. A nation may also exit the global system and focus on domestic development. That’s a perfectly legitimate thing to do, but Tillmans’ poster rules it out with a slogan and crashing waves.

Tillmans’ texts and images are expressions of European liberalism, international fine art and multinational capitalism. They recall German election posters, Ed Ruscha and the United Colors of Benetton. They probably appealed to fashion-forward pro-Remainers, but turned off yobs who rarely vote. The first group had its cosmopolitanism confirmed; the second, its resentment. And here was the problem with the Remain campaign. It flattered young voters that they belonged to an exclusive, European club, and insulted working-class ones by telling them they were stupid for wanting out. It asserted that the EU was a big, welcoming family (tell that to Greece!), while denying that it supported the very “structural reforms” (austerity and privatization), that prompted calls for Brexit in the first place.

The second artwork, or advertisement, was a billboard mounted on a truck. It showed a phalanx of tan- and brown-skinned people of all ages (mostly men) marching toward the camera, with the  words “Breaking Point” printed in red alongside the image. The Scottish photographer Jeff Mitchell in 2015 took the picture on the Croatia-Slovenia border. Licensed by Getty Images for use by the United Kingdom Independence Party (UKIP) and its former leader Nigel Farage, it caused the photo agency some embarrassment when an attentive Scotsman tweeted a comparison of the image with a shot from a Nazi propaganda film.

To me, the “Breaking Point” billboard looks more like “A Pilgrimage to San Isidro,” one of Francisco Goya’s so-called “Black Paintings” (1819-23). In both, a dense crowd forms an endless, helpless stream stretching to infinity. To Goya, the teeming mass is the pueblo—the people of Spain in all their beauty and ugliness. To the photographer, they are the same, a tired and huddled mass seeking rest. The billboard is thus as likely to have elicited sympathy as revulsion for refugees. Immediate denunciation of the billboard by Boris Johnson and other Brexiters suggests in fact that people responded to the image in unanticipated ways.

Tillmans’ posters and Farage’s billboard can’t have changed many minds. They argue by means of assertions that claim to be beyond dispute. Indeed, the Tories and UKIP never asked constituents what they needed. Neither did the Labor Party, assuming their sage advice to remain within the global order was enough. By the time Tillmans’ posters were downloaded, and Farage’s truck cruised the high streets, Brexit was already a done deal in the minds of fifty-two percent of voters.

Posted from the United Kingdom