The bold art of one of Chicago’s greatest photojournalists reflects a bold life.Art Shay was a freelancer for magazines such as Life, Time and Sports Illustrated. He’s also been a prolific author, writing newspaper columns, children’s books, several plays and an autobiography––seventy-five books in all. His extended friendship and collaboration with Nelson Algren is well known. In fact, Shay’s photographs actually led to the latter’s classic, “Chicago, City on the Make.”

Shay apparently couldn’t avoid celebrities. During WWII, he was in the same bomber squadron as the actor-turned-soldier Jimmy Stewart. He photographed several presidents—see if you can spot Nixon’s face looking out from a crowd in one picture—as well as sports heroes. Don’t miss the pictures of a loping Gale Sayers and Mike Ditka as a player on the sidelines. A locker-room picture of Muhammad Ali surrounded by family and friends conveys youth, energy and vulnerability. As for movie stars, a gorgeous photo of Elizabeth Taylor depicts her quiet narcissism, another of Judy Garland captures her delirious energy. 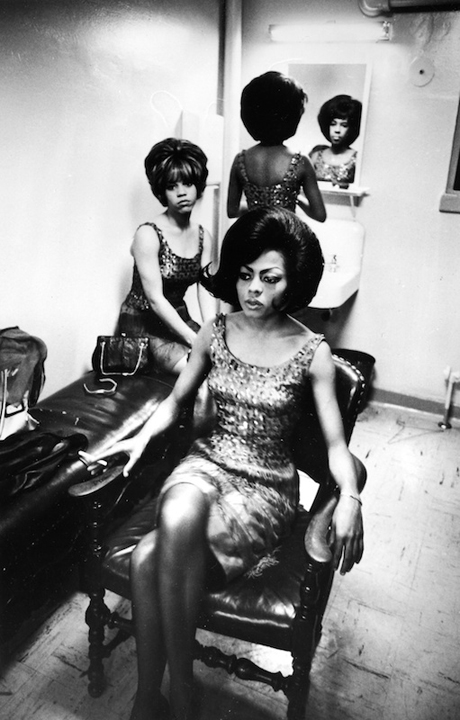 Not just a master of black and white, Shay’s color photographs here are also effective. His blue-brown palette sweetly reflects the somber tones of the city. Contrariwise, those of the garish taverns of Algren’s Chicago don’t conform to our ideas of 1950s Division Street. One body of Shay’s work—there are several—is political in nature, and includes timely shots of protesters and police at the 1968 Democratic National Convention, held in Chicago. The later “Red Bull” could be a defining image of gay pride in this city. Shay’s works often display a sly wit, and the attentive viewer is rewarded with revealing details. A self-portrait with his dynamic, long-time partner, Florence, reveals tiny camera lenses in the bags they carry as they embark on a trip to covertly shoot Las Vegas Mafiosi.

Revelatory is a striking series of photographs Shay made for Ebony in 1952 documenting residents of African-American-founded Brooklyn, Illinois. Never before exhibited, one picture of a young man playing a trumpet against the backdrop of trains is a masterpiece of American photography. (Mark Pohlad)