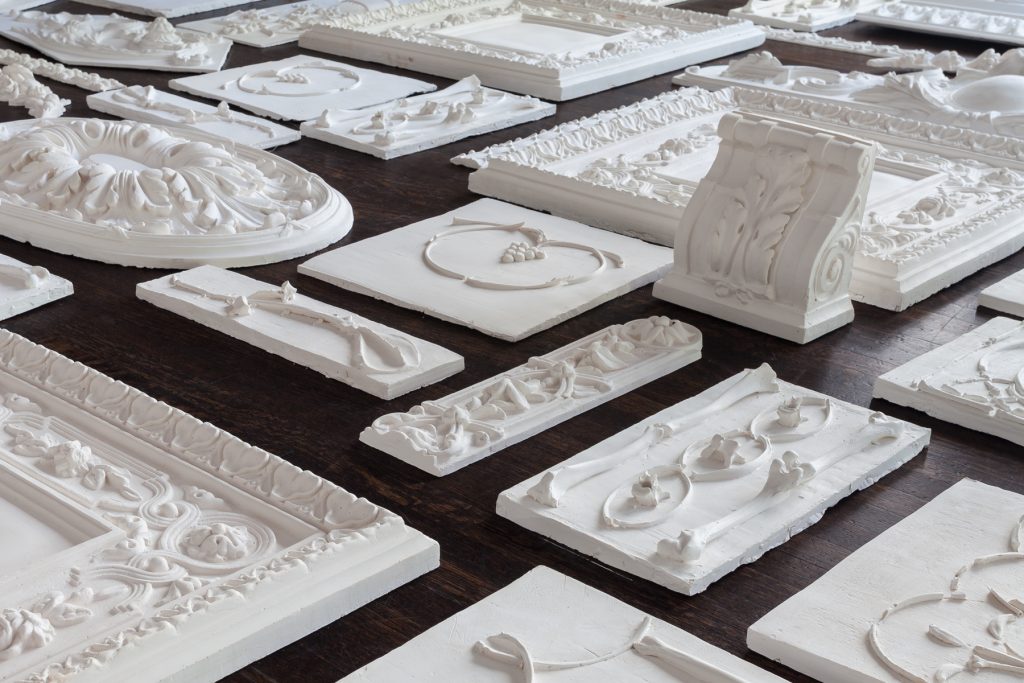 Michael Rakowitz, Installation view of “The Flesh Is Yours, The Bones Are Ours” at the Graham Foundation, Summer 2016 /Photo: RCH|EKH

Before I escaped Chicago for a summer in Beirut, I made countless promises to friends and family that I would take every precaution to keep myself safe. In this city scarred from civil war and still ringing with the echoes of sectarianism, who would have guessed that I would be the one sending condolences and messages of worry and hope to the people of Orlando, Dallas, Istanbul, Baton Rouge and Nice? The tired lesson we take from history is that it repeats itself, but we often forget that it never wears the same mask twice.

Today, the images that haunt me most are not from Turkey or France. They are from Chicago, in a building where spartan rooms boast yawning marble fireplaces and hardwood moulding that trims wide windows with thick elegance. In my memory, I want to enter these beautiful salons, but I cannot. The floors and walls are overwhelmed with slabs of pale plaster that cover the ground and crowd its corners. In turn, each slab is encrusted with forms of acanthus leaves, volutes, gadroons, swirls, heralds or heavy frames of Rococo luxury. To step inside would be to desecrate this dense archive of specimens so carefully gathered and arranged.

In the Graham Foundation’s historic Madlener House galleries, this air of excessive dignity is clouded by the stale stench of rigor mortis. The chalky, blanched surfaces of these extracted architectural ornaments are a collective monument to their own mortality. They are dead on arrival—free-floating references to a long forgotten legacy of design in a country whose reformist policies did everything to forget history altogether. 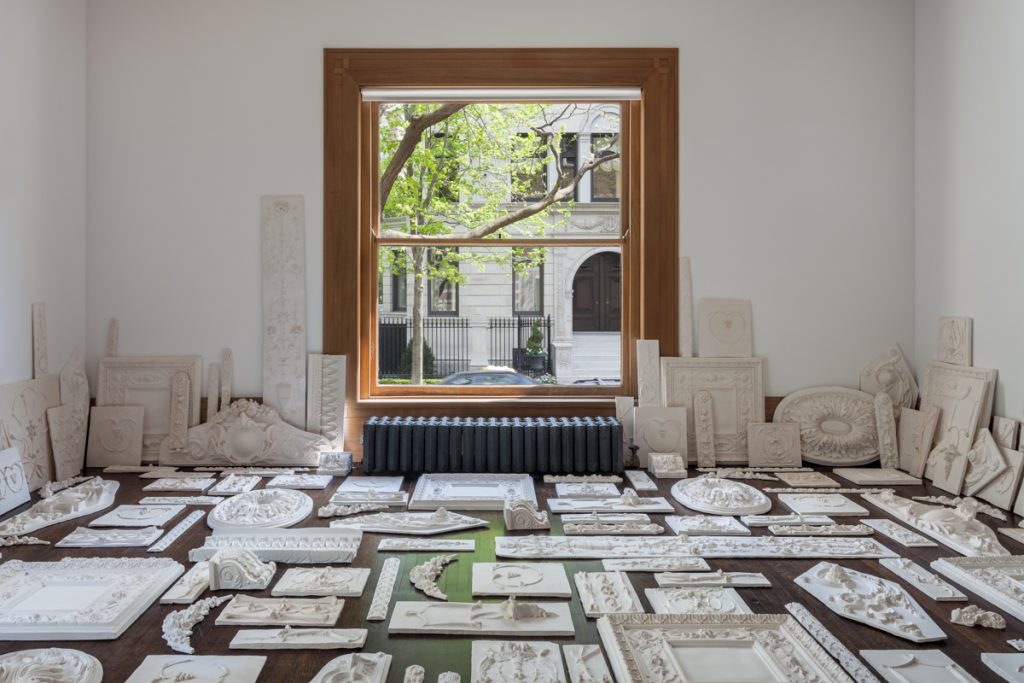 Michael Rakowitz, Installation view of “The Flesh Is Yours, The Bones Are Ours” at the Graham Foundation, Summer 2016 /Photo: RCH|EKH

More precisely, they are plaster casts based on designs that Chicago artist Michael Rakowitz studied in Garabet Cezayirliyan’s Istanbul atelier. Cezayirliyan was an Armenian who decorated much of the fin de siècle architecture in Turkey’s largest city during the flourishing decades of Art Nouveau, when late Ottoman grandeur bred with the decadence of European aristocracy to birth a hybrid style that was neither here nor there, but always—like Istanbul itself—somewhere in between. The studio is now run by Kemal Cimbiz, a Turk who studied under Cezayirliyan and with whom Rakowitz collaborated to make his designs, which were first shown at the 2015 Istanbul Biennial and recreated this summer in Chicago with new elements and expanded narratives that draw on Chicago’s own storied history of ornamented architecture from the turn of the century.

The significance of this artisanal lineage—an Armenian master and a Turkish apprentice—would be lost to time if not for the insistence of diasporic Armenians and their allies never to forget the Armenian Genocide of 1915, when Ottoman officials, fearing an uprising of an oppressed minority within the heart of the ailing empire, carried out mass killings of Armenians to the tune of one-and-a-half-million dead. Beginning with executions of intellectuals and prominent citizens in major cities, the Armenian holocaust culminated in death marches of tens of thousands of Armenians who were deported from their native homeland and forced without food, water or shelter to trek deep into the Syrian desert. Less than a decade later, the modern Republic of Turkey—established in the aftermath of World War I—would incorporate Western Armenia within its borders, effectively annexing the territory. To this day, the Turkish government denies the Armenian Genocide, claiming that the population transfers were meant to remove noncombatants from a war zone. Just last summer, when Pope Francis referred to the Genocide in a Mass attended by the Armenian president on the one-hundredth anniversary of the tragedy, Turkish Prime Minister Recep Tayyip Erdogan condemned the remarks and removed Turkey’s ambassador to the Vatican for nearly a year.

Rakowitz calls his project “The Flesh Is Yours, The Bones Are Ours,” after a Turkish saying that links the apprentice to the master in the lineage of a craft. In the case of Cezayirliyan and Cimbiz, this genealogy puts the bones of an Armenian in the body of a Turk, a hybridity that underscores the Armenian labor behind some of Istanbul’s grandest structures and echoes the skeletal ghosts of Turkey’s spurned past that haunt its fraught political present. Exceeding mere metaphor, Rakowitz incorporates actual bones into the designs of many of his plasters. As an apprentice to Cezayirliyan’s style, he arranged animal bones into elegant patterns—slender ribs curl like vines around vertebral fleurettes while bulbous femurs frame pelvic rocailles. This slight but profound intervention merges the method of the workshop with the solemnity of the cemetery in the form of the fossil. Disassembled traces of an absent whole, they are the working elements of ornamentation yet to be ordered into the grammar of style or the anatomy of a corpse. 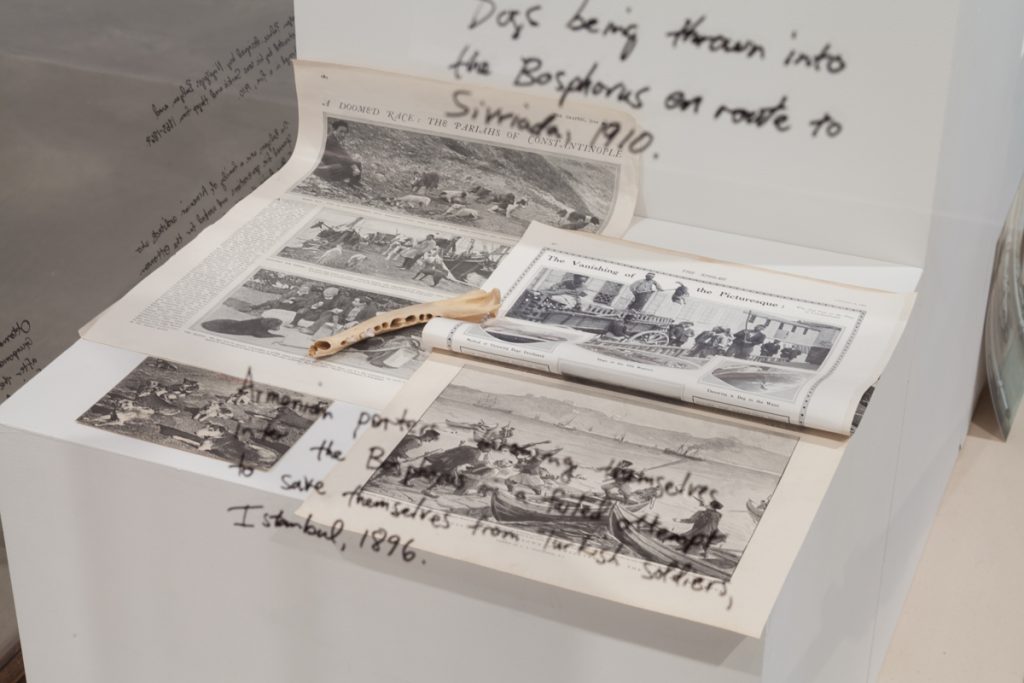 Michael Rakowitz, Installation view of “The Flesh Is Yours, The Bones Are Ours” at Rhona Hoffman Gallery, Summer 2016 /Photo: RCH|EKH

And yet, conspicuously absent in the rooms of the Madlener House are any traces of dust or debris. Plaster is made of calcium salts mixed with inert fillers, a composition that closely resembles the mineral content of bones. In a Smithsonian-worthy vitrine at Rhona Hoffman Gallery’s portion of the dual-site exhibition, Rakowitz displays molds from Cezayirliyan’s atelier that were made with a mixture of ground animal bones and gum arabic. Rakowitz expounds on his storyteller proclivities in this half of the show, replete with his signature style of annotating museum-like displays of seemingly disparate curios with the circumstantial facts that link them all into one massive conspiracy of history. For example, two vintage newspapers reveal that, within a year, Istanbul and Chicago each suffered a “Great Fire” that paved the way for the stone-and-plaster renaissance of Art Nouveau in both cities, with Cezayirliyan and Louis Sullivan at the forefront of each, respectively. With its interstitial annotations cobwebbing between the cast-offs of the past, the Hoffman exhibition plays the role of the dusty attic, while the Graham Foundation has been swept clean, quite literally, of the dust of history.

In the vitrines at Rhona Hoffman, the pristine gaps between each plaster slab are filled with the mortar of Rakowitz’s take on history. An 1896 illustration of Armenians fleeing Turkish soldiers by boat on the Bosphorus is juxtaposed with a 1910 photograph of stray dogs being drowned in the same river. Writing directly on the glass protecting these objects, Rakowitz reminds us of the 80,000 stray dogs rounded up by Turkish soldiers in Constantinople and taken to Sivriada Island, where thousands of them starved and drowned. “A DOOMED RACE: THE PARIAHS OF CONSTANTINOPLE” proclaims a newspaper report on the historic event from within the vitrine, but, as Rakowitz’s arrangement implies, the headline could have easily described the Armenians who would soon suffer a similar fate.

If there is the dust of canine bones in the plaster that beautifies Istanbul, this is not to say that these buildings should be torn down. History is a series of tragedies retold as triumphs, and Rakowitz reminds us that resistance is more often a practice of preserving the palimpsest than a will to wipe it clean. At the Graham especially, the virtues of sculpture shine: History is recast in new forms that encompass a greater swath of what once was and still is, and a new grammar emerges to speak of the muted past.

Michael Rakowitz’s “The Flesh Is Yours, The Bones Are Ours” shows at the Graham Foundation, 4 West Burton Place, and Rhona Hoffman Gallery, 118 North Peoria, through August 13.