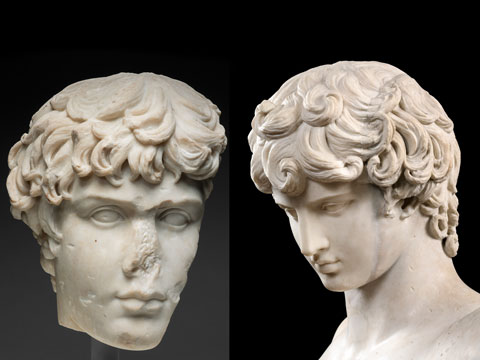 Flanking the entrance to this exhibit, busts of Roman Emperor Hadrian and his lover, Antinous introduce us to a charming couple. Hadrian looks like the hard-working chief executive that he was, handpicked by his predecessor to manage the largest empire the Mediterranean world would ever know. Antinous looks like the boy toy from a distant province who caught the emperor’s eye. Both were outsiders in Rome. Possibly they loved each other very much. Hadrian was not the first emperor to bring a young man into his bedroom, but he was the first to publicly announce his affection. After Antinous tragically drowned, busts of both emperor and lover were distributed throughout the empire.

Though small, the exhibit offers a good opportunity to contemplate the continuity of Western civilization over the past two thousand years. Hadrian was an enthusiastic advocate of classical Hellenistic culture in both his polyamorous sexuality and polytheistic religion. Both remain an anathema to the Abrahamic religions, and Hadrian played a crucial role in their history, driving the Jews from Roman Judea and reverting the territory to its Classical Grecian name “Syria Palaestina.”

Three pieces in the exhibit also offer a good opportunity to contemplate Classical sculpture. Sometime in antiquity, a second-century marble bust of Antinous was split in two. In 1907 the Art Institute acquired the facial fragment. The remaining head and shoulders, now owned by the Palazzo Altemps Museum in Rome, was given a new face in the eighteenth century. Recently an astute art historian noticed that its original face was probably in Chicago. Both pieces are now on display in this exhibit, along with a 3-D print that unites the original fragments.

The original second-century piece is good public sculpture, effectively portraying its subject as cute, self-centered and as mysterious as Bacchus. The seventeenth-century sculptor has carved a face that is more sensuous and alluring, probably to please a private collector. Though neither of the above are aesthetic masterpieces, the twenty-first-century digital print is a disaster by comparison. It is probably accurate to within a fraction of a millimeter, but much less than that separates life from death on the surface of Classical form. (Chris Miller)

Through August 28 at the Art Institute of Chicago, 111 South Michigan