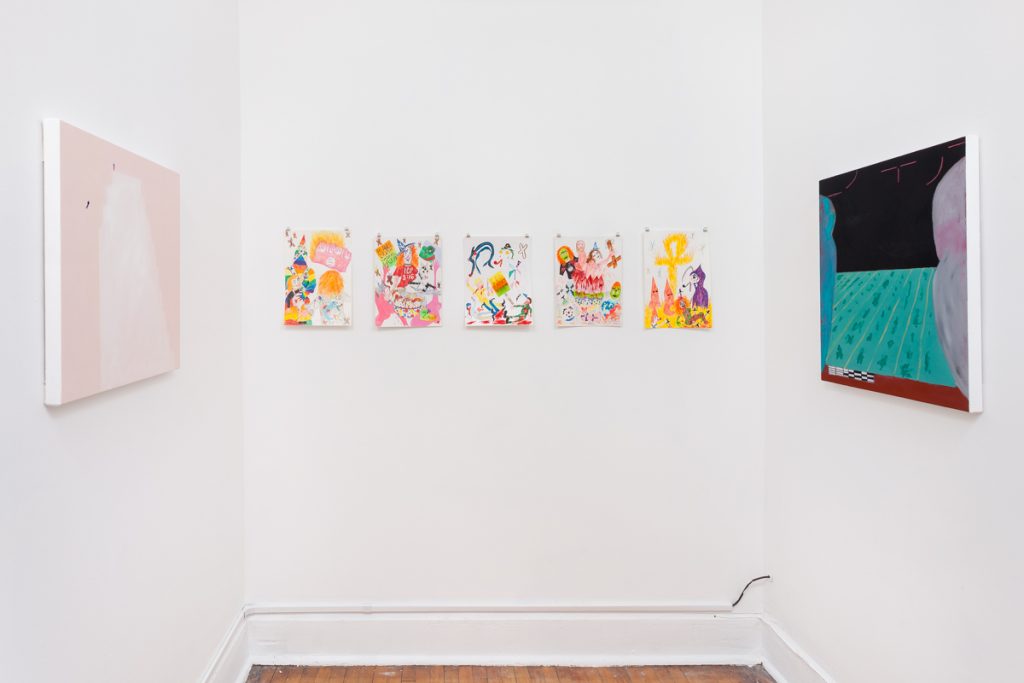 While pairing the painterly efforts of Jenn Smith with the manic marker illustrations of Bailey Scieszka may seem like an odd curatorial choice at first glance, the artists’ work aligns in a way that casts a unique spotlight on Middle America. Smith, who recently graduated from the School of the Art Institute of Chicago with an MFA from the Painting and Drawing department, is heavily influenced by her evangelical Christian background. Her four oil paintings here evince a religious theme, albeit with a touch of humor. “Untitled (Figure and Jesus)” shows Christ standing behind a black-clad figure who is painting the scene the characters are standing in. In that painting lies another painting of the same scene, repeated smaller and smaller for a meta-take on religious iconography.

Smith’s depictions are tame compared to the frenzied scenes that Scieszka conjures. Characters stylized like Insane Clown Posse followers wield upside-down crosses and axes. A figure resembling Kid Rock cradles a man wearing a Confederate flag T-shirt that reads, “God Hates Flags.” In some pieces, maimed figures are bleeding amidst apparent conflict, with entrails spilling out of their bodies. Despite the violence, the scenes don’t necessarily feel serious. Scieszka’s use of bright colors and comic-like creatures instead channel the surreal world of Lisa Frank, whose trippy designs ubiquitously clad school supplies of the 1990s.

While Smith and Scieszka may seem to be making light of white, Midwestern culture, both come from the worlds they portray. Smith grew up in rural Illinois, believing in things like the rapture and the importance of having a relationship with Jesus Christ. While she is no longer evangelical, the trappings of the hyper-religious atmosphere continue to capture her attention. Similarly, Scieszka is from Detroit, and the low-brow cultural obsessions of the city are everywhere in her work: ICP, Kid Rock, WrestleMania, handguns and South Park all cameo in her art. The artists’ pieces work together to offer a personal view into the nuances of white America—it’s not just the Westboro Baptist Church. It’s also the rainbow-colored Equality House that stands just across the street. (Kerry Cardoza)

Through September 23 at cornerstore, 1903 South Allport