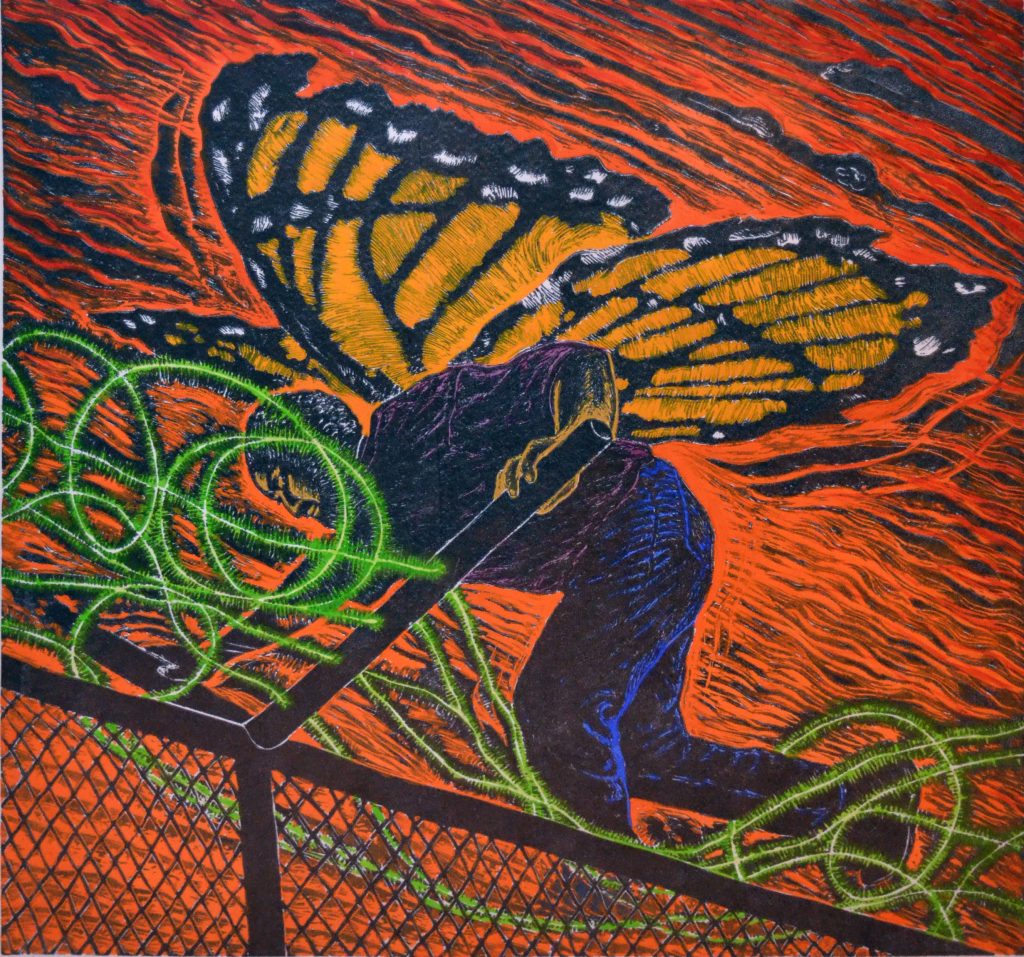 Remember NAFTA? The 1994 trade agreement enabled American corporations to own factories in Mexico where the minimum wage is fifty cents an hour. Ten years later, those maquilas accounted for fifty-four percent of U.S.-Mexico trade. Recently, they have replaced China as our primary source for many consumer goods, transforming the American economy and hence, its politics. Blaming Mexicans for dwindling jobs, many American wage earners have recently found a champion for their cause, one who promises to build an impenetrable wall along the U.S.-Mexico border.

Concurrent with that presidential contest, “Maquila Blues” will be on exhibit through Inauguration Day, 2017. The artist is Oscar Moya. Born in Mexico City in 1956, he crossed the border in 1971, and it has remained much on his mind. A former Chicagoan, he now lives in El Paso, working in a Swiss-owned factory that services the maquilas just across the border.

Following the early tradition of Mexican political art, Moya depicts working-class Mexicans as gentle, innocent victims. In one serigraph, a young family runs desperately toward the Statue of Liberty. In another, a worker plays with cute puppies in front of a towering, endless fence. In yet another, the sweet, sad face of a child presses against the barrier’s steel mesh, a butterfly resting on her fingers. Beautiful, harmless Monarch butterflies migrate freely across the border every year—why can’t people do the same?

Such heavy-handed sentimentality reads initially as propaganda, but for Moya, the border has a psychological as well as political dimension, and his work is not always so sentimental. As he puts it, he’s “not belonging here or there.” Some of these pieces, especially a recent acrylic titled “Borderline,” are transcendent visions that seem to seek understanding rather than sell empathy. Moya is an accomplished craftsman in paint as well as linocut, drypoint and serigraph. His standards are high, and his latest work is his best. Hopefully, after November 8, he will feel free to further pursue his sense of wonder and self understanding. (Chris Miller)