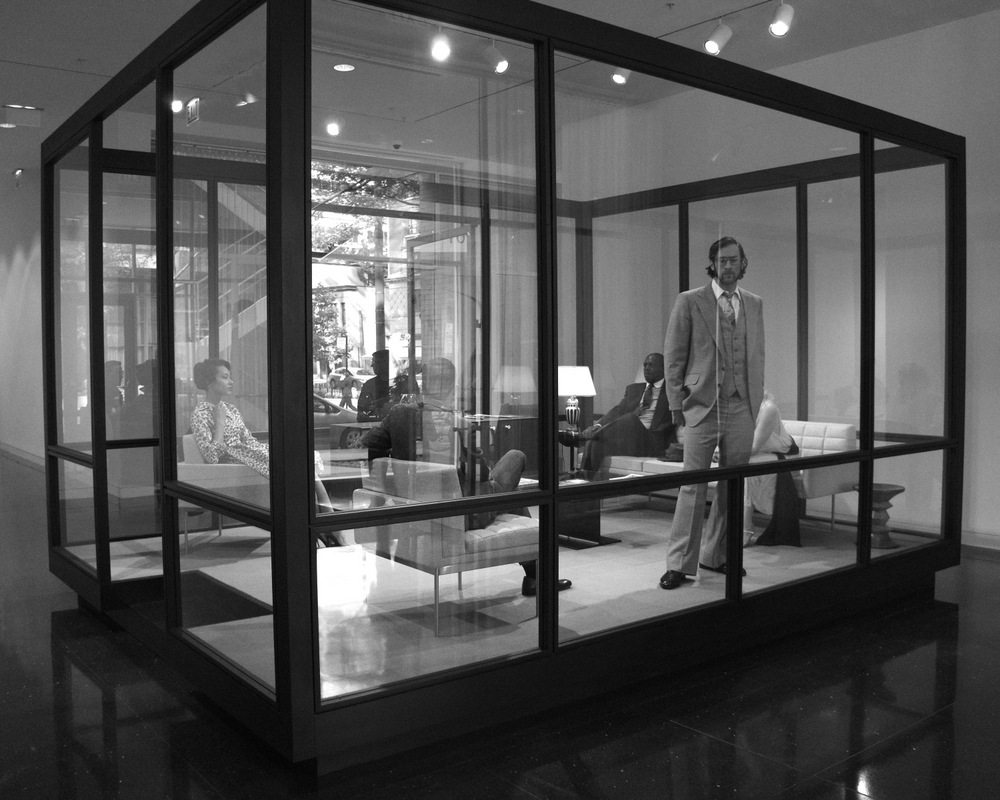 Josiah McElheny with John Vinci, Dress rehearsal for “The Club for Modern Fashions,” 2013

“Ten or twenty years from now, some of these students will be eating crow,” one of the Armory Show’s organizers declared about the young artists who protested the now-legendary 1913 exhibition of avant-garde art. Students from the School of the Art Institute of Chicago were so scandalized by Henri Matisse’s work in particular that they burned copies of his colorful, abstract paintings and staged a mock trial in which they found him guilty of “total degeneracy of color” and “general esthetic [sic] aberration,” among other art crimes.

Drawing on the energy of that lively debate, The Arts Club of Chicago was founded in 1916 to “encourage higher standards of art” and “to promote the mutual acquaintance of art lovers and art workers.” One hundred years later, The Arts Club is still committed to these ideals. For its 2016-17 year, it is celebrating its longevity through a series of centennial events, including a birthday celebration the weekend of October 21-22. Open to the public, the fête will include a new commissioned work from the Pulitzer Prize-winning composer David Lang, to be performed throughout the building by the music ensemble Eighth Blackbird, whose yearlong residency at the MCA culminated in July.

“The core mission hasn’t changed in the past one-hundred years,” says executive director Janine Mileaf. “We were founded to make a place for the exhibition of modernist, contemporary art. There was an education-awareness mission from the beginning that the city of Chicago needed to see things and to be offered those challenging works…That really remains at the heart of what we do.” 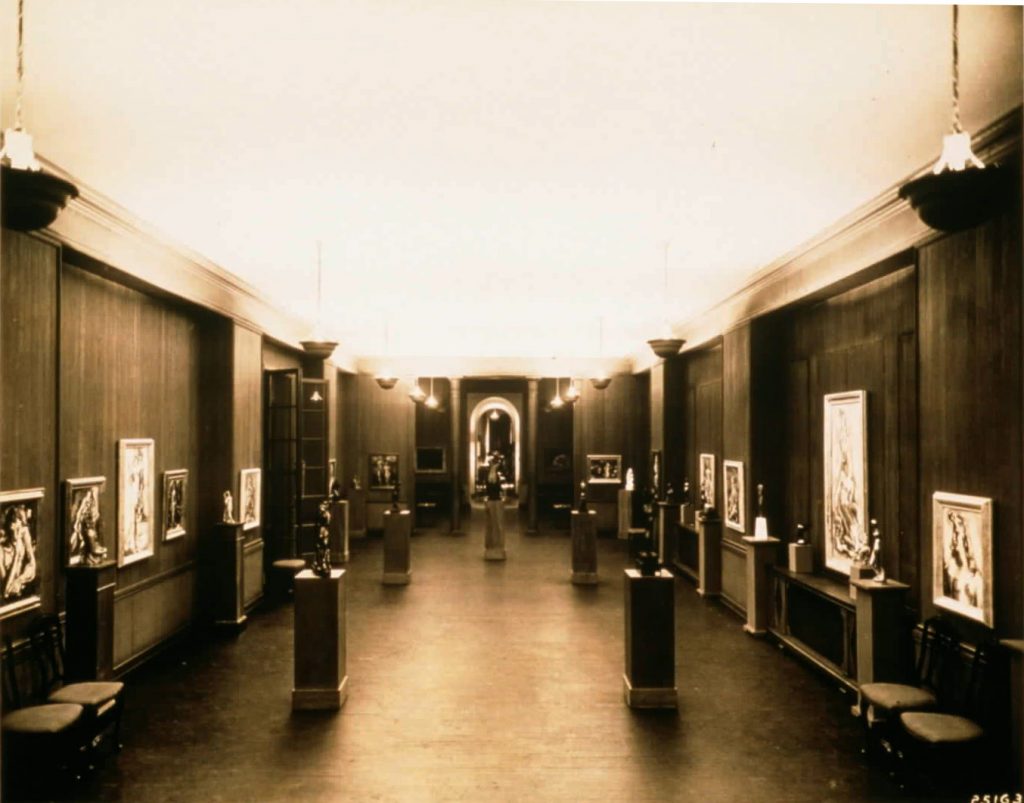 The Arts Club at its 410 North Michigan location in the Wrigley Building, 1924-36

Mileaf has been at the helm of The Arts Club since 2012. A major focus of her tenure has been on expanding the institution’s presence in the community. It has always maintained a private membership, which includes access to the permanent collection and to its vast programming, but exhibitions are free and open to the public during gallery hours and public events. As part of the centennial celebration, the permanent collection will be on view to the public starting September 20. “At the same time we’re celebrating the centennial among our members, we’re also using it as an opportunity to bring The Arts Club to the city,” Mileaf says.

While the size of the Club’s permanent collection may be modest, the artworks that comprise it are not. The most notable work is Picasso’s “Head of a Woman,” acquired by the Club from its 1923 exhibition, “Original Drawings by Pablo Picasso.” The show was Picasso’s first solo exhibition in the United States. It was installed by The Arts Club at the Art Institute, which hosted exhibitions by The Arts Club from 1922-27. The Club also has works by Henri Matisse, Joan Miró and Isamu Noguchi, in addition to more recent acquisitions from Yayoi Kusama, Paul Thek and Alex Katz. The Club gave one of its most valuable pieces, Constantin Brancusi’s “Golden Bird,” to the Art Institute in a partial sale and donation in 1990. This helped finance its current space, which is also the first location owned by the club. Interestingly, “Golden Bird” was acquired by The Arts Club from an exhibition they staged of Brancusi’s work in 1927 at the Art Institute. The show, Brancusi’s first noncommercial exhibition, was pivotal for the artist’s career, all the more so because it was organized by none other than Marcel Duchamp, whose legendary “Fountain,” a urinal displayed on its side, upset the 1913 Armory Show and set the stage for modern and contemporary art as we know it. Duchamp actually brokered the “Golden Bird” sale for Brancusi. The Arts Club purchased it for $1,200. In 1990, they sold it for $12 million.

It’s hard to talk about The Arts Club without getting caught up in these tales from its long history, which speaks to its significance, not only for Chicago, but for the history of modern and contemporary art. For its anniversary, the club is paying homage to some of these major events through a series of reenactments, all open to the public. The events are taking place at locations throughout the city where the institution has been housed—The Arts Club has lived in eight spaces, including its gallery space at The Art Institute and its current home at 201 East Ontario Street. The first such event re-installed a 1917 exhibition of Frank Lloyd Wright’s collection of Japanese prints and offered his restaged lecture titled “The Print and the Renaissance.” Another event brings to life the series of correspondence between Alexander Calder and former club president Rue Shaw that resulted in the artist’s commissioned mobile, “Red Petals.” The sculpture is permanently installed on the first floor of the club, positioned near a famous staircase designed by Mies van der Rohe that was salvaged from a previous Arts Club location.

The Mies staircase, an architectural icon in its own right, served as inspiration for the Chicago-based artists of Luftwerk, who are creating a site-specific installation for the centennial. The piece, titled “Corner of a Square,” will be on view outside in the club’s garden. Luftwerk was already quite familiar with Mies’ work; in 2014 they had an installation at the Farnsworth House. 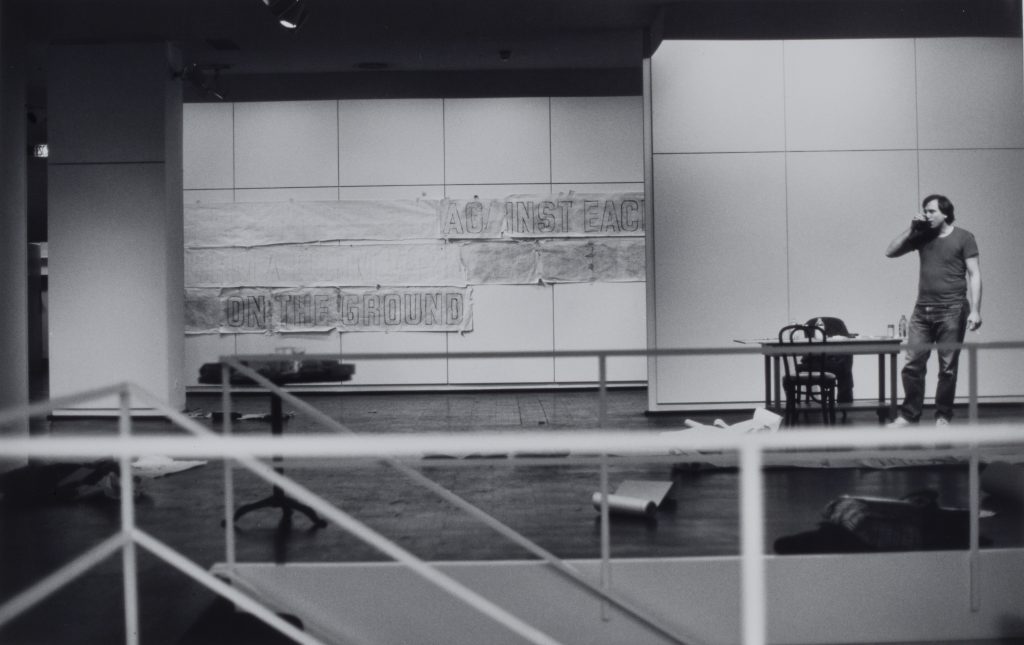 The staircase, made of steel and travertine marble, comprises three levels of steps. “We’re really riffing off the ninety-degree angle,” says Petra Bachmaier, who, with Sean Gallero, makes up Luftwerk. The light-based work will be on all day, but viewers will have to visit in the evening to get the full effect. “During the day it’s going to be static,” she says. “Once the evening sets, it’s going to be really dynamic.”

The Chicago design duo Sonnenzimmer also took inspiration from the collection for their centennial contribution. Artists Nick Butcher and Nadine Nakanishi are creating a graphic timeline of the club’s history through six screen prints, each focusing on a particular era. Nakanishi explains that they took particular interest in the theories on art of Gertrude Stein, the esteemed writer who lectured at The Arts Club in 1934. Both pieces will open at a centennial event on September 20, coinciding with EXPO Art Week. 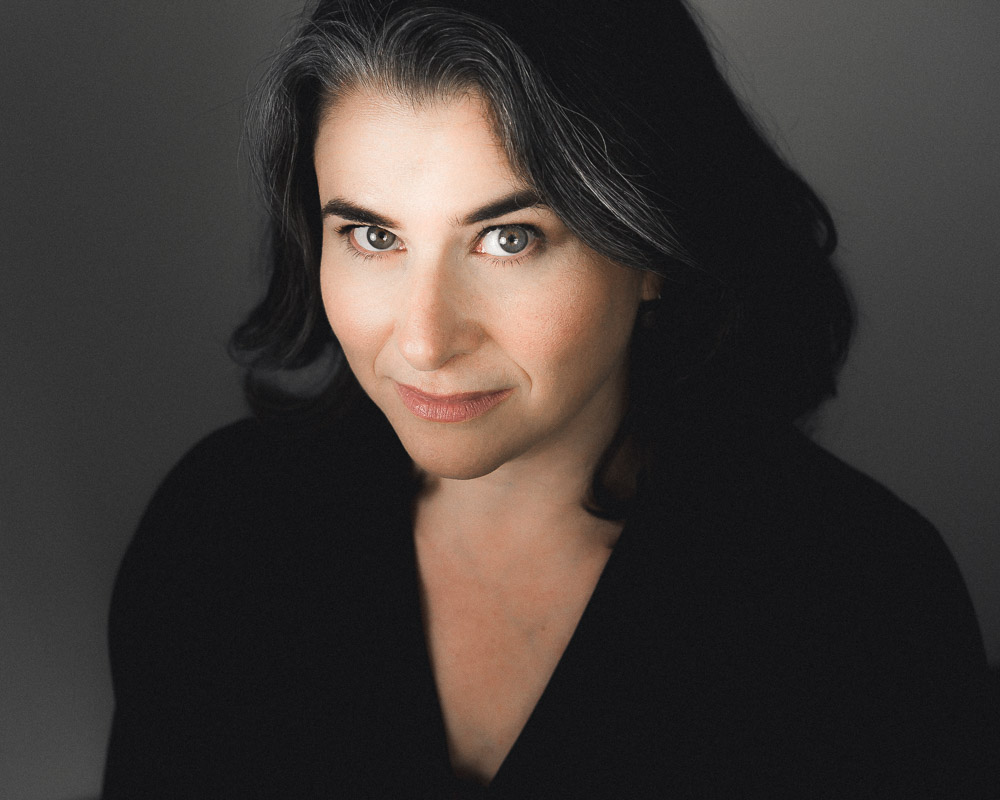 Mileaf, whose role includes being The Arts Club’s chief curator, invited both of these groups to participate in the centennial. Erik Peterson, a Chicago-based public artist and curator who exhibited one of the first pieces in the club’s outdoor garden area, lauded Mileaf’s curatorial work and the effort she makes to discover new artists. “As a person she’s very kind and has a gentle demeanor, but she’s also a trailblazer and a real heavy hitter when it comes to Arts Club artwork,” Peterson says. His large-scale installation, “The Oasis,” was on display last winter as part of a new initiative to commission outdoor works visible to passers-by on the street. As he noted, the Chicago winter is likely “the worst possible time to have an outdoor art experience,” but he viewed the challenge as an asset, creating a colorful sculpture that channeled the idea of a beach. “To take a chance on an artist who’s less well-known is really important,” Peterson says. He thinks it shows Mileaf is constantly looking for the best talent, both locally and around the world. “They are ensuring Chicago be that place to get to see that art,” he says, an idea that embodies the same mission the club had when it was founded. Claire Pentecost and Marshall Brown, both Chicago artists, have also exhibited in the outside space there as well.

The Arts Club has a strong history of female leadership, which Mileaf and current president Helyn Goldenberg are committed to continuing. Many of the club’s most significant moments are thanks to the work  enterprising women who volunteered to ensure that Chicago played a vital role in the world of contemporary art. Rue Winterbotham Carpenter was the first at the club to be in contact with Picasso; Elizabeth “Bobsy” Goodspeed brought Gertrude Stein and Alice B. Toklas to the club; Winterbotham Shaw commissioned Calder’s “Red Petals” and invited a then-unknown John Cage to perform—all are former club presidents who were tireless in their efforts.

“Many things have happened in one hundred years in the art world,” Goldenberg says. And yet the institution’s role in the city is largely the same as in 1916, she thinks. “What probably has not changed and will never change is our dedication to the new, to what is happening today, things we don’t understand, things we need to be introduced to, things that need to be discussed and talked about.” 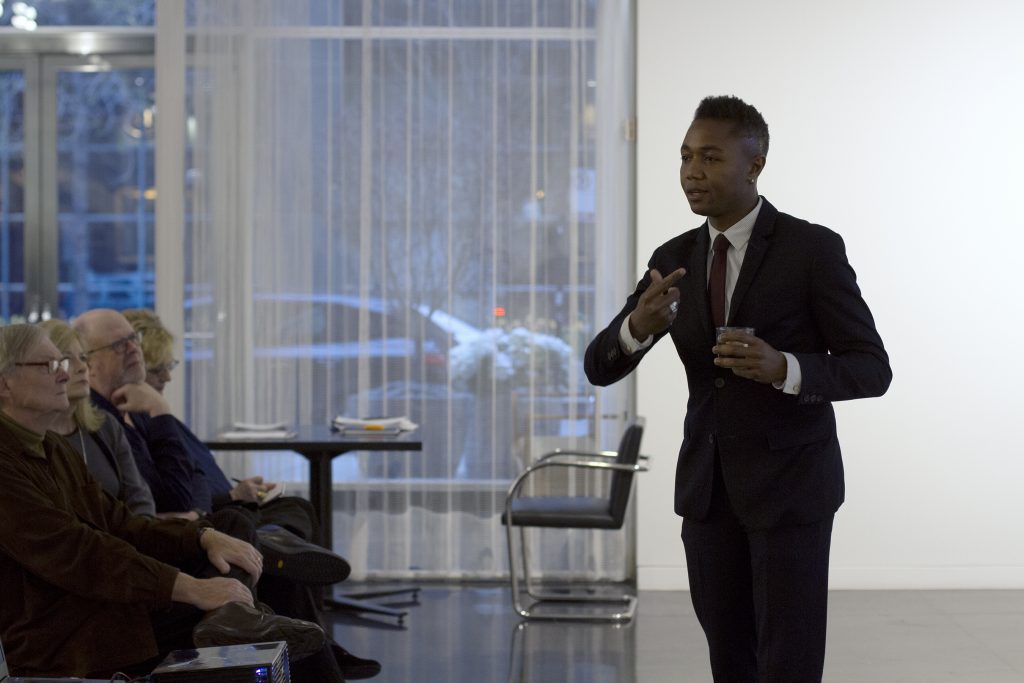 Mileaf tends to agree, even though the art scene in the city has gone through metamorphoses of which the founders could never have dreamed. “I think when we started we were the only people showing contemporary art,” Mileaf says. “Now we’re part of a very complex city with all kinds of institutions—from garage-run galleries in people’s homes to the Art Institute and the MCA and a lot of not-for-profits in between.” While The Arts Club maintains its effort “to expand the artistic horizons” of the public, not every exhibit reflects its avant-garde past. “Artists that are invited to exhibit have an excited response, to be a part of that continuum,” she notes. “By doing their own work they are part of that history.”

Mileaf is amazed that the club’s founders were “able to pinpoint something that was needed” and that the institution has managed to stay true to that goal for a century. “These radical artists are right. They represent a search for new beauty,” the critic Harriet Monroe wrote of the Armory Show in the Sunday Tribune.

“Rudzienko,” a two-channel film installation by Sharon Lockhart that was on display through August, perfectly embodies this century-old sentiment that remains as timeless as ever. In the film, teenage girls from a group home in Poland express themselves openly to the artist represented through transcribed conversations and slow-moving interactions. “She stands on the sidelines of life, looking.” These words appear briefly on the screen, poignantly unabashed. “And only the tears streaming down my cheeks/Remind me of you.” Such truth and beauty in art will always be radical.