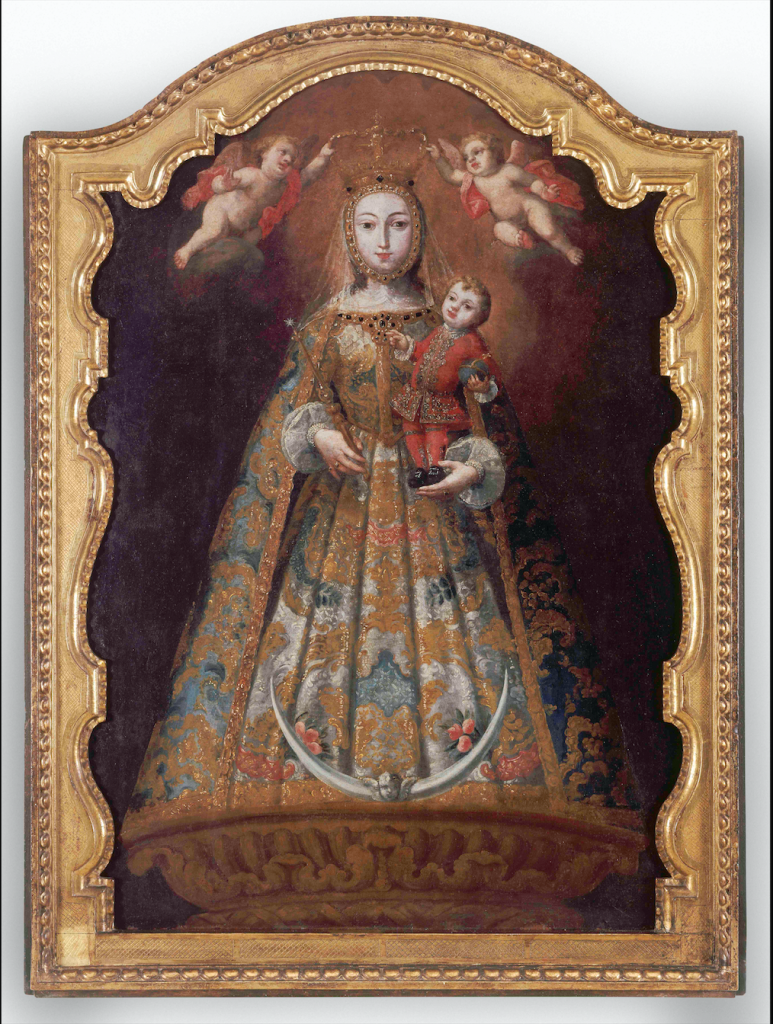 Drawing together objects from the Patricia Phelps de Cisneros Collection, this exhibition showcases a range of artworks made during the seventeenth through nineteenth centuries for devotional and liturgical use in the Spanish colonial dominions (and, despite the title, Brazil, which was colonized by Portugal). It includes polychromed and gilded wood sculptures, paintings, silver vessels, furniture, several notable tabernacles and one small Indo-Portuguese ivory. As such, it is a welcome counterpart to the series of recent exhibitions of Spanish colonial art at the Art Institute, which have tended to focus exclusively on painted panels and canvases. Nevertheless, those exhibitions hold some things in common with “Power and Piety.” As with the current “Doctrine and Devotion” show (which I reviewed in May), it foregrounds the role of religious makers and patrons. And as with last year’s “Voyage to South America” (reviewed in October 2015), it occludes the racism and slavery that permeated the colonial milieu and indirectly funded the production of art.

That said, the exhibition offers a wealth of information for those interested in the visual culture of colonial religion. With the notable exception of an excellent work by Puerto Rican master José Campeche, the paintings are primarily of a workaday quality, exemplifying their status as generic objects. The differences between these works and those commissioned by wealthier patrons from more accomplished artists may be seen in comparison with a seventeenth-century panel from Cuzco depicting the Madonna and Child accompanied by four Jesuit saints in the upstairs gallery of the museum. These objects are a godsend to the art historian, for they tell us a great deal about the broader visual culture of, say, eighteenth-century Venezuela.

The exhibition’s high point is a gallery which gathers several tabernacles and smaller panels under the rubric of personal devotion; evidencing a wide variety of regional styles, the works compress a wealth of iconographic detail in intricate, sometimes idiosyncratic, ways. One panel, from a series of nineteenth-century works by the Tocuyo River school in Venezuela, shows the Trinity. God the Father has a triangular halo, while blood spurts from Jesus’ side onto a globe below, the drops radiating out to cover the world like conquistadores or missionaries. The image is reminiscent of eighteenth-century Moravian drawings which art historian Jason LaFountain has argued “construct a fantasy of cultural concord” while serving as instruments of “cultural discord.” This is the true subtext of Spanish colonial art. (Luke A. Fidler)

Through November 12 at the Loyola University Museum of Art, 820 North Michigan