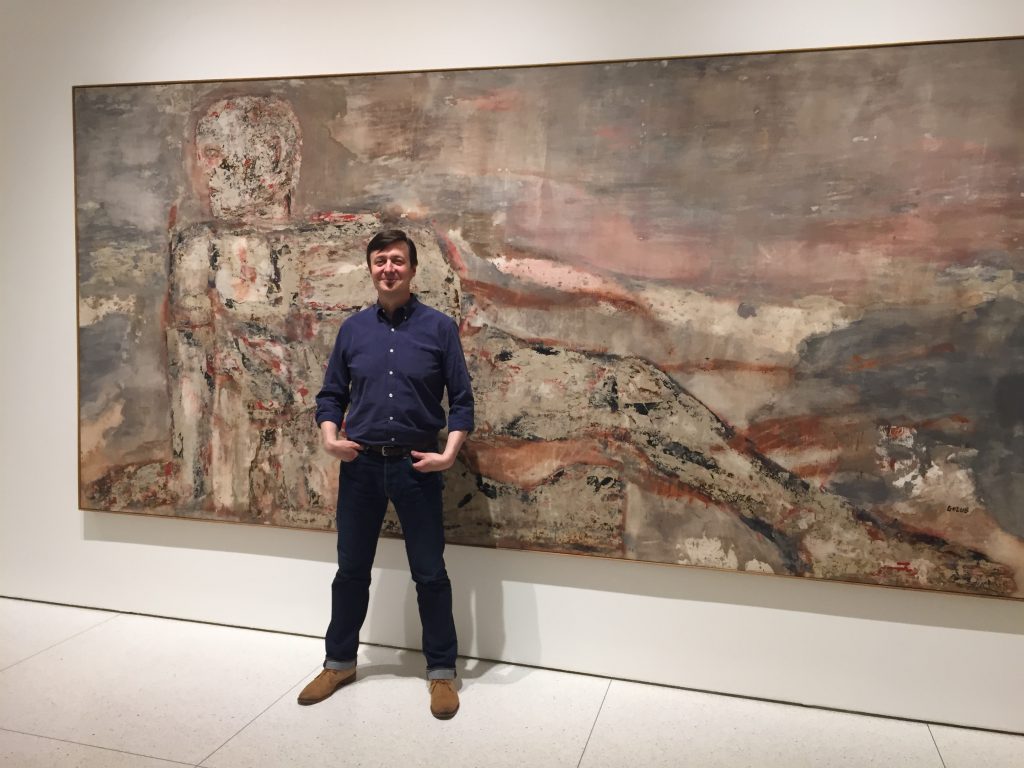 John Corbett in front of a painting by Leon Golub

John Corbett has been curating music and visual arts in Chicago since the late 1980s. Following an appointment as the chair of exhibition studies at SAIC and a long-running weekly series at the Empty Bottle, Corbett turned to curating with his now longtime business partner, Jim Dempsey. In 2004, they established Corbett vs. Dempsey, a commercial gallery on the third floor of the Dusty Groove building at the edge of Ukrainian Village and Wicker Park. Recently, Corbett sat down with Newcity contributor Laura Volkening to reflect on his unusual path to curating, his philosophy on “great work,” and how both have influenced his approach to his involvement with the selection committee of EXPO Chicago 2016.

Here we are at the Dusty Groove building, where your gallery sits above the record shop. Would you mind sharing a little bit about how you got started, your interest in music, and how that all landed you here in this particular space curating visual art?

A lot of my background is as a curator and presenter of music. I started in college working with an organization that was putting together concerts of mostly jazz and improvised music. When I came back to Chicago in 1987, I immediately started working with Southend Musicworks. I also did a lot of independent curation of events leading up to the creation of the Empty Bottle, and I participated in a big 1995 event that brought European musicians together with Chicago musicians. Following that, in 1996, Ken Vandermark and I embarked on a weekly series at the Empty Bottle that pretty quickly turned that into an annual festival. We did that for ten years. In 2002, the Berlin Jazz Festival invited me to be the artistic director. It was a really exciting event, and they were very enthusiastic about bringing a lot of Chicago into the program.

I started teaching at SAIC in 1988. I was invited by the chair of the exhibition studies program there to substitute for her while she was on sabbatical. That was what pulled me into really thinking about curation not from a time arts perspective, but from the perspective of putting things on walls and in space. I had also been a closeted art historian all along. I can honestly say that Jim Dempsey and I backed our way into being a gallery. We set out instead with a very real set of questions about our own city’s history that we didn’t understand, and we just tried to answer them as best we could because it didn’t seem like anybody else was doing that.

Did your affinity with music draw you to your current space above the Dusty Groove record shop?

I had known Rick Wojcik, who runs Dusty Groove and owns the building, and when Jim and I were thinking about a space we asked him for some advice. Rick offered his upstairs, which at first we thought was absurd. When we went to see it, we saw how amazing and beautiful it is. We didn’t think we could make it work, but Rick encouraged us to figure it out, so we did. When we walked out front afterwards, Jim looked at me and was like, “Do we have an art gallery?” And that was it.

How did you and Jim Dempsey start working together?

Well before the gallery, Jim and I started curating things together and we were constantly looking for new venues. At the time, I was chair of exhibitions studies at SAIC and I ran a program called “Dark Nights.” It was in between student shows, so they would be a weekend long or sometimes longer. They were the training wheels in terms of getting my head around how you put an exhibition together. Jim and I had started working together because he invited me to help him with a program he was doing at the Gene Siskel on Sun Ra. That was the first time that we collaborated and we really liked working together and from there it just took off.

After the Sun Ra program, we started doing exhibitions together in different places. After a while, we got a little tired of finding a new place to do it every time and instead decided to go into business together. At first we thought we would be private dealers so we wouldn’t have to have a space to make public. And then we realized no, the curatorial process is what we liked doing, so why would we do all of that work only to sell things, if that’s not actually the part we want to emphasize? 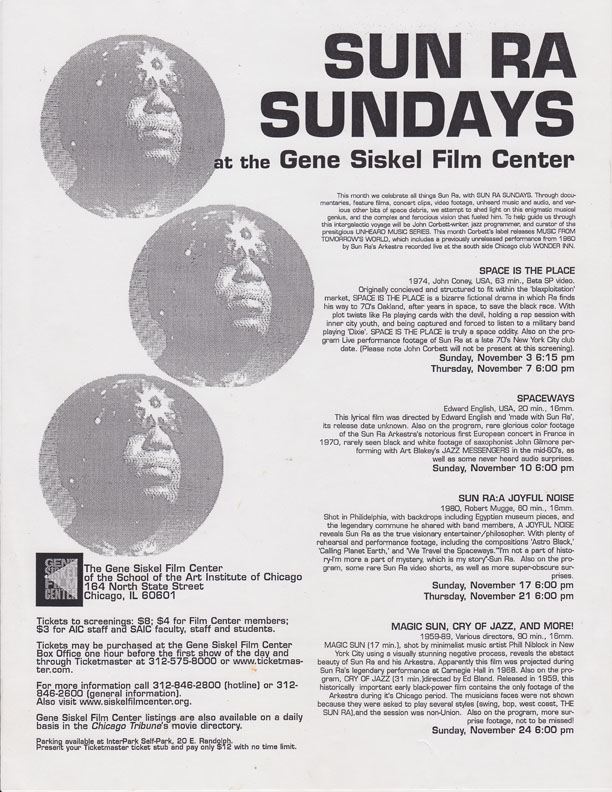 How do you balance those curatorial interests along with maintaining a sustainable business, one that looks both locally and internationally?

For us, having a business comes out of being excited about the work and believing that our enthusiasm for it will be shared by others. It really comes out of having a coherent, if sometimes hard to articulate, sense of why it is we do what we do in terms of the curatorial program. We have a sincere belief in our work that makes sense to the people who are paying attention to it, including collectors from outside and within Chicago. I don’t see it as a compromise one way or another. With every show that we do, we work very hard to allow it to achieve the highest level of success that we can.

A good example of this are the catalogs we’ve done for almost every show. They take a lot of effort, but we know they pay for themselves, even if it takes a little while. We thought, “Let’s have a little section for our books to be in people’s collections.” It’s always enjoyable to go over to someone’s house and see they have a little CvD part of their bookshelf, because it means that the things we’ve been doing will have a legacy.

When we started out, the orientation of the gallery was very Chicago. A lot of what we were doing was answering our questions about the contemporary scene in Chicago. Around four years into the gallery’s existence, we began to really question how that would work long term. We realized that the best situation was to allow people to see the Chicago work that we were doing in the context of the best work we could imagine showing alongside it from anywhere.

I go back to something that Ken Vandermark said once about what we did at the Empty Bottle, which was that it was very important to present on the same stage the highest-level musicians from around the world and musicians from Chicago who were also considered topnotch. We show some of the best-known painters in the world and on the same walls we’re putting things by people who might not be so well known, but might be longstanding members of the Chicago community or might be obscure figures that deserve to be better known, from Japan or wherever it might be.

With regard to blending the Chicago and international arts scenes and letting the quality of the work speak for itself, how do you translate this into your involvement with the selection committee for EXPO Chicago?

The amount of time is equivalent to the amount of time you might spend if you were on a grant-review panel or something similar. There are two sides to it: one is prep, and there is a modest amount of preparation, and then there is the amount of time and effort and especially the negotiations that go on in the process of reviewing the applicants. I take it very seriously. Everybody who is applying has a reason that they want to be there. We’re very lucky to have an amazing selection committee that represents an outstanding level of work, and are all very sympathetic people. Art dealers get a very bad reputation, in some ways totally well earned, for being hoity or as not always the most collaboratively minded people.

So the process is more like a peer-review system, for which you are accountable and have to hold yourselves to a certain standard?

Indeed. In my experience in this first year on the committee, people were almost unusually thoughtful and held the applicants to a very high standard, willing to discuss every nuance of that in terms of what it would mean for any of these galleries to be participants in this fair. The advantages and consequences of being admitted to the fair had really been talked through quite thoroughly and that was a really great process for me. I didn’t know what to expect and I was really happy. These are our colleagues—but this isn’t like academic colleagues—these people are theoretically competitors in a commercial context. And yet, to me it even had a more collegial feel than similar situations that I had been in that were academic. But that’s what I like, and one of the things we’ve done historically at CvD. When Jim and I meet people who we like we immediately start thinking about what could we do together. It cuts against the kind of territoriality and defensiveness that can otherwise be present. 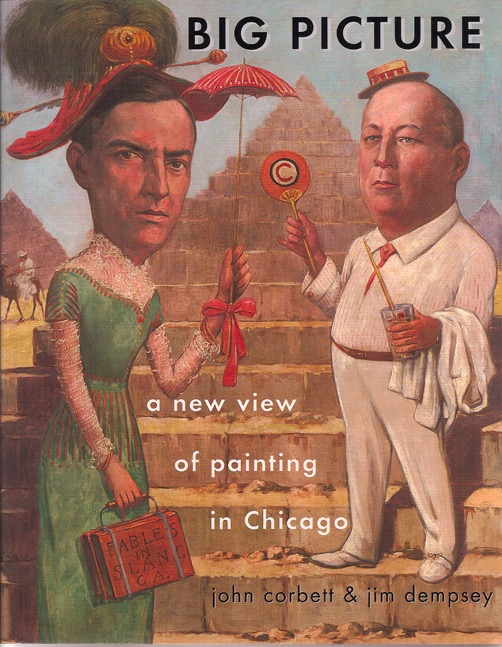 Catalogue cover for “Big Picture: A New View of Painting in Chicago,” an exhibition at the Chicago History Museum, 2007

EXPO itself is also a very unique space, one that combines curatorial decisions at the level of each gallery with the overall curation of the fair.

On the selection committee, we’re there to judge the applicants and also to help suggest organizations we think ought to be there who might not be otherwise. Tony Karman and his team are great and we admire and trust them to know the field and to bring in the people he thinks will make the best multilayered cake for us. It can be a matter of balancing young galleries along with established galleries. Fairs can get pretty routine, so we figure if we’re not interested, no one else will be interested. So we try to keep it from becoming routine, reinventing it every time, so the people who come to them have some interesting work to chew on.

So the work itself really drives your approach at EXPO, like it does with your gallery?

Definitely, it’s the same principle. Recently, I worked on this film about the Chicago Imagists that Leslie Buchbinder made, called “Hairy Who & The Chicago Imagists.” When I did the interviews for the film, I spoke with Kerry James Marshall and he has this beautiful line; he says, you know, in the long run, great work will out, it always does. You can become cynical about that, and you can become skeptical about it because we see time and again that great artists get overlooked, but he is confident that that’s not going to be the case forever and that those people will eventually be recognized. That’s the point that I take, that the most important thing is the quality of the work, the quality of the vision, the independence and the sense of adventure that the work has. That’s what it’s all about for me.