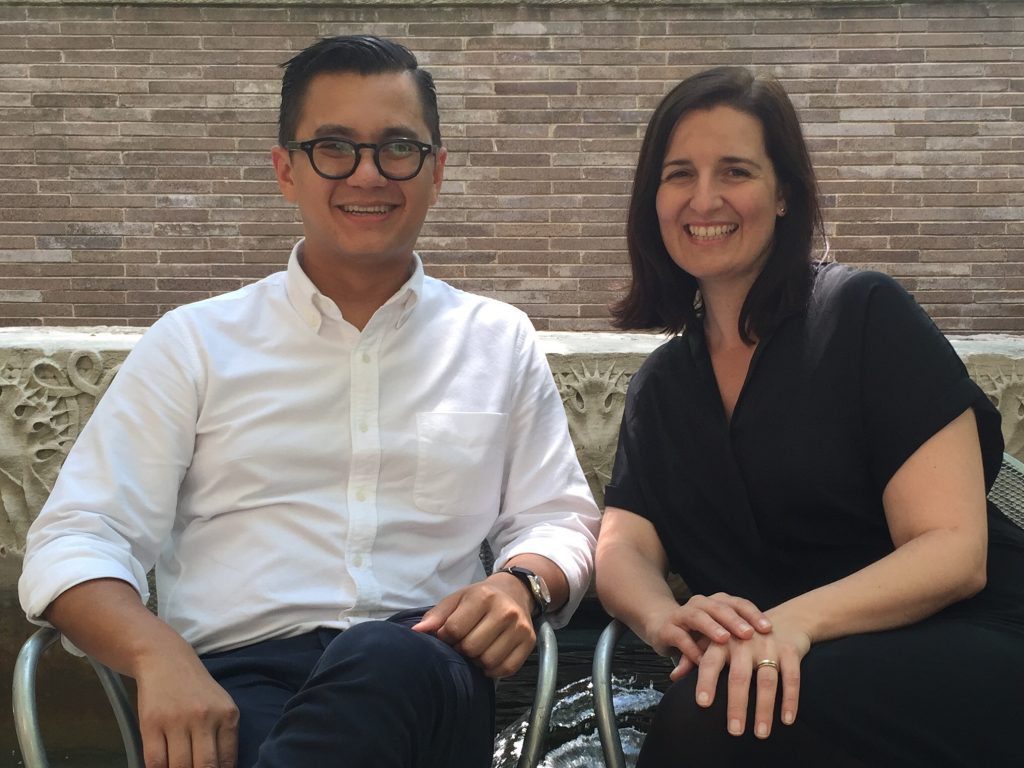 When José Esparza Chong Cuy arrived in Chicago this spring as the MCA’s new Pamela Alper Associate Curator, he found an old friend and colleague in the Graham Foundation’s Director Sarah Herda. The two of them recently sat down with Newcity’s Anastasia Karpova Tinari to discuss the challenges and pleasures of working at the intersection of art and architecture, how both cut their teeth at New York’s Storefront, and some lesser known Chicago “passengers.”

AKT: Let’s start with how you met.

JECC: We met through Storefront for Art and Architecture, although we didn’t really work together. It was just after Sarah left, and Joseph Grima had done one show [Grima followed Sarah as Director and more recently co-directed the Chicago Architecture Biennial]. I walked in and said, “Can I intern here?” Even though we did not overlap, that small institution provides close ties and so many shared experiences, which was probably much rougher for Sarah since she was really the first one to take it on.

SH: [Laughs] Well, I took over from the founders, Kyong Park, and the artist Shirin Neshat, who was a long time co-director. They had been there sixteen years and I was there for about eight. Storefront is really forged by fire, making exhibitions and producing projects in the most extreme conditions. It literally opens with an incredible façade project by Steven Holl and Vito Acconci. It’s an important piece of experimental architecture in itself that is completely open air, which in Mexico might be great, but in New York City it’s a little tough.

JECC: It’s extremely cold during the winter and extremely hot in the summer—it’s experimental architecture you have to deal with. And it’s also extreme conditions in terms of the budget, the way you produce exhibitions. It’s a very DIY space, for better or worse, but working there, you do really see all the steps of making an exhibition, from inviting the artist, actually producing the work, to communicating it to audiences.

SH: Storefront is also one of the few programs devoted to the intersection between art and architecture. It’s a testing site, and it has an incredible legacy of artists and designers who have done projects there. I probably made forty exhibitions, but you know, I was the director and also shoveling snow. Sometimes I was the only person in those early days, so you can imagine it became a tight, close community.

AKT: So the moment of meeting actually happened sometime after Sarah left?

JECC: Yes, it was probably a benefit or something. I think the twenty-fifth anniversary in 2008. I had just moved to New York, and I was very young, twenty-one.

SH: [Laughs] Yes, we were both so young, I was twenty-three when I started, so we share that—we both became adults at Storefront.

JECC: [Laughs] Well, I’m not sure I can say I became an adult.

AKT: José, you were most recently at Mexico City’s Museo Jumex, and Sarah you’ve been at the Graham since 2006. How did each of you adjust to bigger institutions? 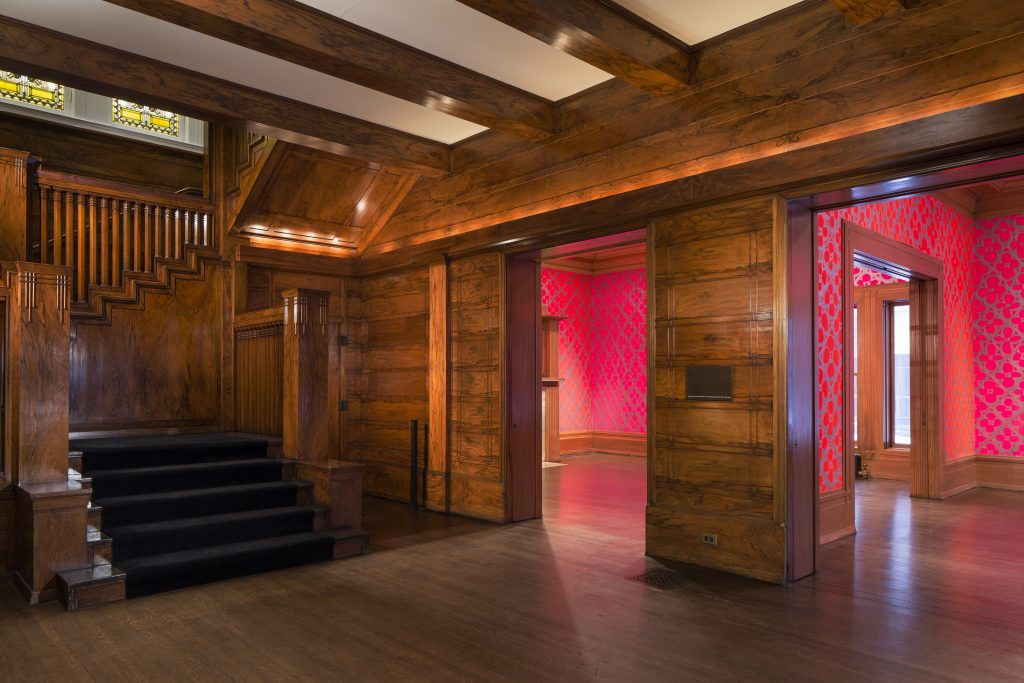 SH: What I say about being forged by fire is really true. Working at such a small institution shaped a sensibility for me about the significance of taking risks and doing everything you can to produce an artist or architect’s project in the way that they want. I firmly believe that exhibitions are one of the most important sites for architecture. One needs to take risks in making exhibitions the same way you would in developing an architectural practice.

JECC: Also, we learned to think that you can do anything. At a bigger institution you might come to restrictions, but you can always find ways around it.

AKT: Last year Rhona Hoffman Gallery, where I work, hosted James Wines, who expresses a nostalgia for that foundational moment in the 1970s when land art and people like Gordon Matta-Clark or Acconci really broke down barriers in the disciplines. Do you think that spirit is still alive in the intersection between art and architecture?

SH: Absolutely. Architects are always looking at art and artists are looking at architecture. I say quite often that important ideas about architecture don’t always come from architects. Storefront was born out of the alternative art space movement in New York, founded in 1982 by a practicing architect who also worked as an artist. The Graham was founded in 1956 on that same principal of art and architecture, with which people might not be as familiar. Ernest Graham wanted to start a beaux arts school with architecture right alongside sculpture and painting.

JECC: Many of the artists I’m interested in have a background in architecture, from Juan O’Gorman to Gonzalo Fonseca, Juan Downey to Alfredo Jaar, Gordon Matta-Clark to Pedro Reyes. I would dare to say that architecture programs were a common alternative to the formal Bellas Artes training for many artists in Latin America. The idea that architecture as a discipline is one that only makes buildings has been challenged for decades.

AKT: And at its root, architecture is about organizing space, which can also be applied to a curatorial practice. How has studying architecture influenced your work as a curator?

JECC: Curatorial practice is very spatial. You inhabit an exhibition and walk through very much as you would a domestic space, and that certainly informs my work. There are also curators with a background in architecture. Pablo León de la Barra and Julieta Gonzalez are people who I’ve worked with closely.

Studying architecture provides perspective not only of objects, but also places and spaces. Context is very important for me when putting together an exhibition: the political and social environment around the making. That is something I learned through studying architecture, and also surrounding myself with architects, because they are always thinking about context.

AKT: Do you think the practicality of getting a building built today has restricted the creativity of architects today? Are the creative ideas mostly manifest in exhibitions?

SH: Depends on where you are. When we were doing studio visits for the Chicago Architecture Biennial in Mexico City, I found a huge difference between what you’re doing as a young architect in the U.S. and abroad. In Mexico, if you’re a young architect, you are building. In the United States most experimental ideas develop in schools, because that is the support system. There are lessons to be learned between Mexico City and Chicago, and now I’m thinking more about creating opportunities for young architects. Also in the biennial, we had an international survey in which you could see opportunities for experimentation play out across the world—in Asia, Africa and even in Los Angeles, there is experimentation on a domestic scale. 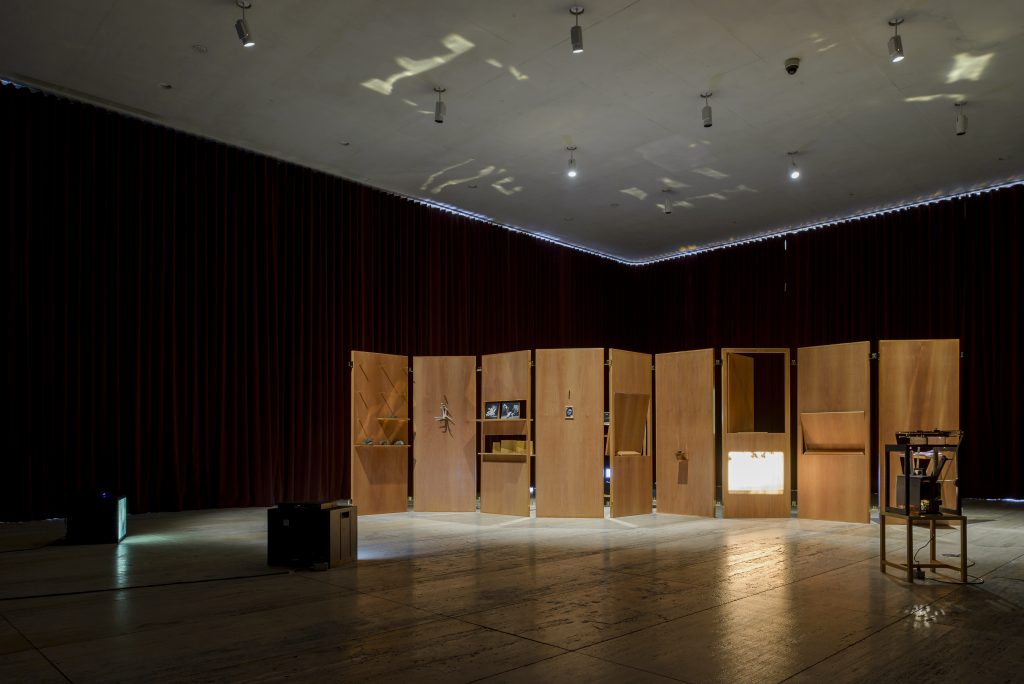 AKT: Architecture has a heavy presence in Chicago, as the biennial emphasized. At Rhona Hoffman Gallery, I see how architecture seeps into how artists see the world, specifically Julia Fish, Judy Ledgerwood, Richard Rezac, Michael Rakowitz, and others. Have you noticed?

JECC: Absolutely, it was one of the reasons I came to Chicago. From the World’s Fair to the Graham Foundation, the architectural history is something I want to continue exploring. There has also been a fascinating history of people who passed through Chicago.

AKT: Right, at Museo Jumex, you launched the exhibition series “Passengers,” focusing on international artistic figures who passed through Mexico during the twentieth century.

JECC: Yes, the “Passengers” series focused on artists who passed through Mexico and left an imprint. That is a shared history with Chicago, a third coast or middle point between New York and Los Angeles that many people pass through. I’m studying at the moment György Kepes, a Hungarian who came with Moholy-Nagy to start the New Bauhaus. This important Bauhaus history of Chicago is told mainly through Moholy-Nagy, but I’m interested in this side character. Kepes went on to Boston to found the Center for Advanced Visual Studies at MIT.

SH: And the Graham gives him a grant to start this center…

JECC: …during the Graham’s first year.

SH: The history of Chicago surrounds us, yet there’s a vibrant contemporary community of people who work in the discipline of, but engage ideas of architecture head on. The Michael Rakowitz exhibition, which we collaborated on with Rhona Hoffman Gallery, takes you into this significant, dark social-historical narrative through architectural ornamentation. Or Judy Ledgerwood, who did a full-on installation at the Graham Foundation, where the painting becomes the environment.

SH: One of the projects that came out of digging through the archives at the Graham is the exhibition on Anne Tyng, who worked with Louis Kahn and was a true pioneer in advanced geometry. Her work was completely unknown to me, and I started to understand her relationship to projects in Kahn’s office; the famous theoretical tower attributed to Kahn was a project Tyng brought in. We had an unpublished manuscript, and I started talking to this incredible late historian Detlef Mertins, who then brought in Anne, then in her nineties and living in Philadelphia. Those conversations led to the exhibition at the ICA in Philly and the Graham. The world wasn’t ready for her ideas, and that transcript sat in the drawer for some thirty or forty years. At the time of the exhibition, there was a lot in the air and many young architects working in the realm of advanced geometry. Getting to expose Tyng’s work while she was alive was an incredible experience.

Also one of the first projects I funded at the Graham was Alena Williams’ exhibition on Nancy Holt. We had that exhibition while Nancy was alive and very active, and then that’s how I met Barbara Kasten, with whom we ended up doing an exhibition. An interesting web of ideas reveals itself as you work over time.

JECC: I have been thinking that is what I most admire about Sarah: she takes on projects that are underdogs and makes them real. You make them exist and become permanent, like Storefront, like the Graham Foundation, and now the Architecture Biennial, which is here to stay. It’s out of your passion. We both started at this tiny institution in New York that would have disappeared if someone like Sarah hadn’t taken it on. She makes them relevant, and re-energizes them.