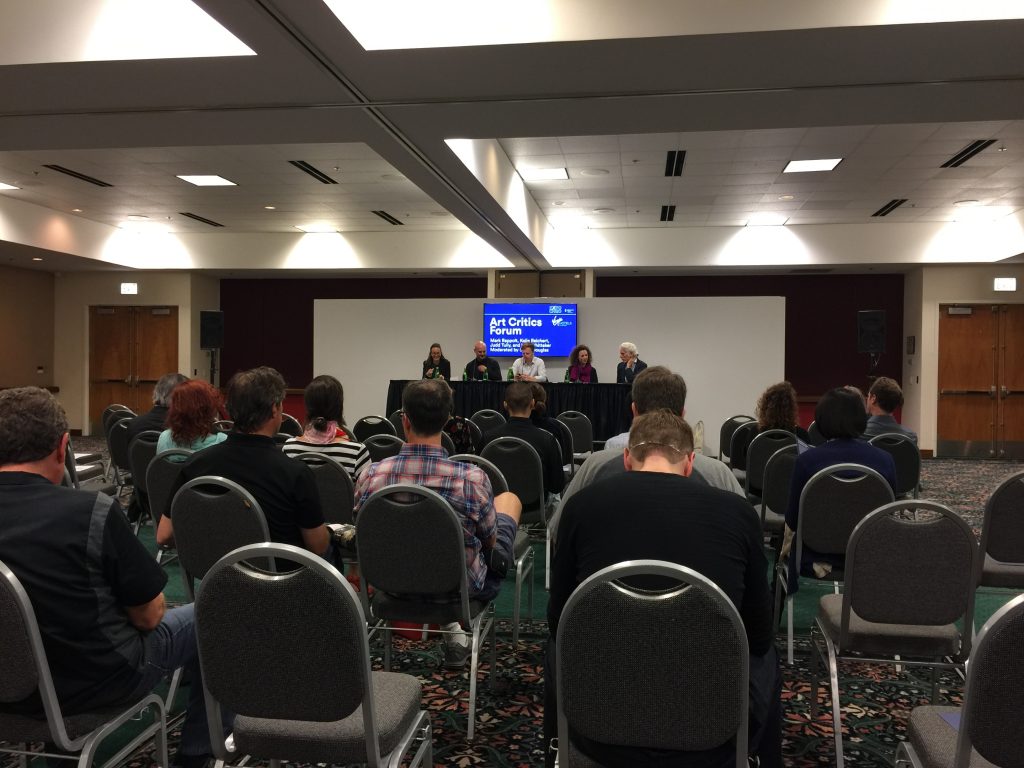 Among the first panels on offer at EXPO Chicago 2016 was the Art Critics Forum, a roundtable discussion that I (foolishly) assumed was open to the public. In fact, it was convened on the third floor of Chicago’s Navy Pier convention hall, in one of the conference breakout meeting rooms that lines the exposition, far from public view. Rushing in a few minutes late, I observed a fluorescent-lit room at about half-capacity. The panelists—Mark Rappolt, editor-in-chief, ArtReview and ArtReview Asia; Kolja Reichert (no relation to the author), art editor, Frankfurter Allgemeine Zeitung; Judd Tully, editor-at-large, Blouin Art+Auction; and Iona Whittaker, editor, Ran Dian—were introduced by moderator Sarah Douglas, editor-in-chief of ArtNews, a major New York-based online art journalism platform.

The question at stake, posed in a roundabout way by Douglas and with ample reference to New York Times film critic A.O. Scott’s newish book, “Better Living Through Criticism,” was typically anxious and self-absorbed: What is the role of the art critic in these uncertain, digital- and market-driven times?

The answers offered by each critic varied, but all fell within the range of cynical to hopeless. Mark Rappolt, who helms the veteran London-based ArtReview (which recently opened ArtReview Asia to capitalize on the expanding contemporary art economy there), insisted that the art critic is not a “sad victim of the market,” emphasizing that writers have a choice in about what and how they write, even against the torrent of PR-generated, readymade content that gushes from every hired gun in the art world. Offered first, his comments seemed needlessly defensive, but Judd Tully put them in perspective with his anecdote-filled remarks about the decline in art sales and the increase in art-world gossip, citing the recent scandals of Alec Baldwin’s spat with Mary Boone Gallery over an alleged bait-and-switch sale and the court case over an aggressively misattributed Peter Doig painting that was litigated in a Chicago court this summer. Tully’s gripes, rightfully aimed in the opinion of this writer, were with the echo chamber of arts journalism, which seems only to magnify whatever thrills and ills bubble to the surface. And yet, his comments wound down with the stale observation that the gallery-museum-industrial complex is ruining the art world with its “tremendous influence on the kinds of shows that are made.” Sure, but what do we critics do about that?

Iona Whittaker spoke next, tracing some of the concerns that all journalists, even outside art writing, face in straddling the digital-print divide. She made a salient point about the art world’s fetish for physical objects, which sets it apart from other fields where digital platforms have conquered more easily. As she spoke, it occurred to me that the strange phenomenon by which digital arts journalism platforms aspire to produce a print product—in the inverse of the logical and economical trajectory taken by other media outlets—is perhaps an apt metaphor for the whole enterprise of art criticism today: incorrigibly regressive, and proud of it. Her other comments, particular to the Chinese art world that Ran Dian covers, were interesting for their analogous relationships to American ethical concerns, but with a flare for the extreme: she spoke of refusing envelopes of cash at openings and navigating heavy-handed censorship in the form of inexplicable website failures. 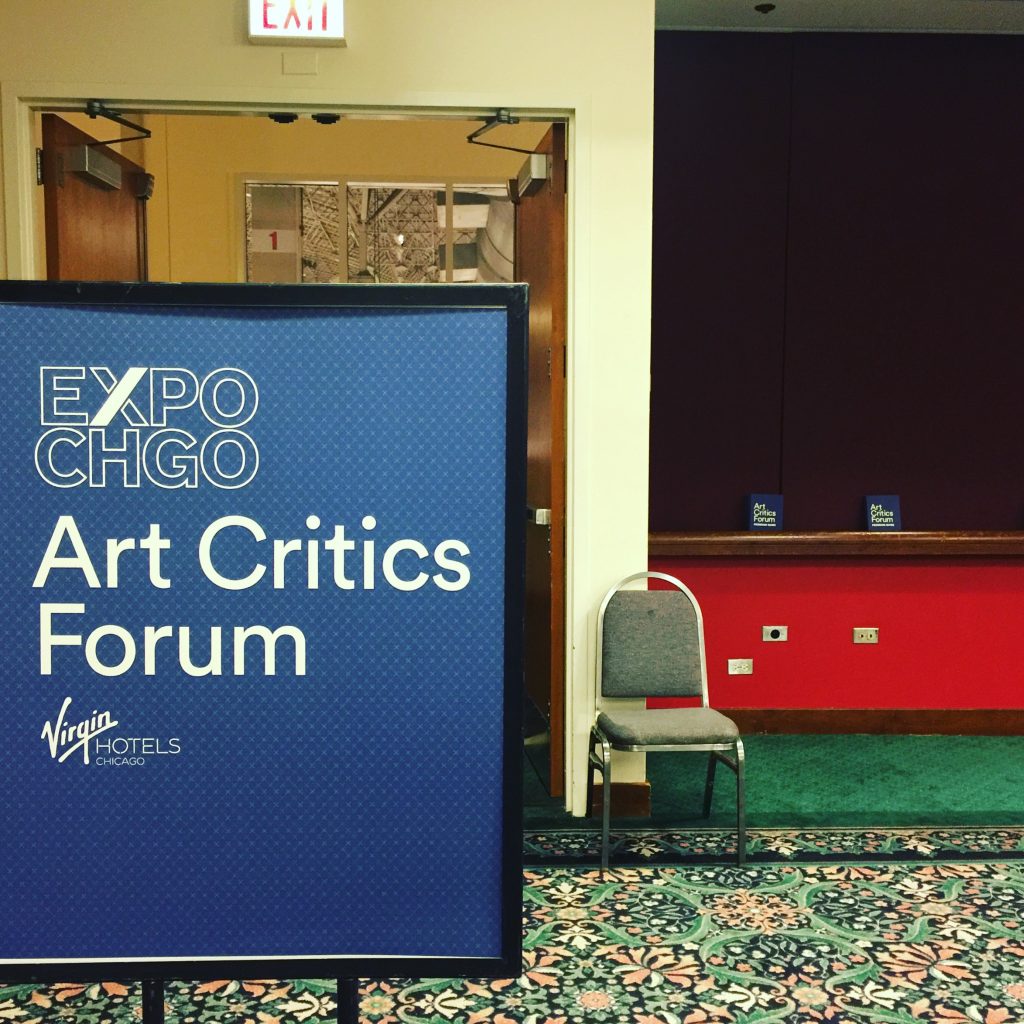 Kolja Reichert spoke last, before the extremely abbreviated discussion and Q and A session. He opened his remarks bluntly: “Art criticism has become a pathetic thing,” he declared. As the panel was already well over time, I should have left then, sated with the most direct judgement yet offered. But I waited and heard him unravel a gossipy tale of his decision to publish remarks made to him in confidence by performance artist Marina Abramovic, in which she claimed American hip-hop star Jay Z had deceived her by offering and then failing to make a large donation to the Marina Abramovic Institute in exchange for appearing in his music video for “Picasso Baby,” filmed in Pace Gallery in New York and based on her performance “The Artist is Present.” The conclusion of the feud—Jay Z produced a receipt for his donation and Abramovic apologized—is far less interesting than the fact that the story, among the most amplified in and outside the art world last year, had nothing to do with art criticism, but as Tully had said earlier, revolved around money, fame and gossip.

The ensuing discussion melted into a pool of these legitimate, but ultimately tired observations and complaints about the failures of art criticism to adequately contend with the market’s dominance in the art world. At one point, Reichert mused that an ideal model of investigative art journalism could be easily achieved by convincing a few wealthy collectors to pitch in on a truly independent project, one that did not subsist on advertising and positive coverage for its circulation and revenue. The proposition struck me as especially bizarre in its misdiagnosis of the root cause of art criticism’s ills: the galleries and the museums, so often blamed for the nepotism and corruption that plagues the art world, do not weild its true power. Behind them are the mega-collectors whose wealth flows through every vein and artery of the system, at once pumping it with life and circulating its pathogens.