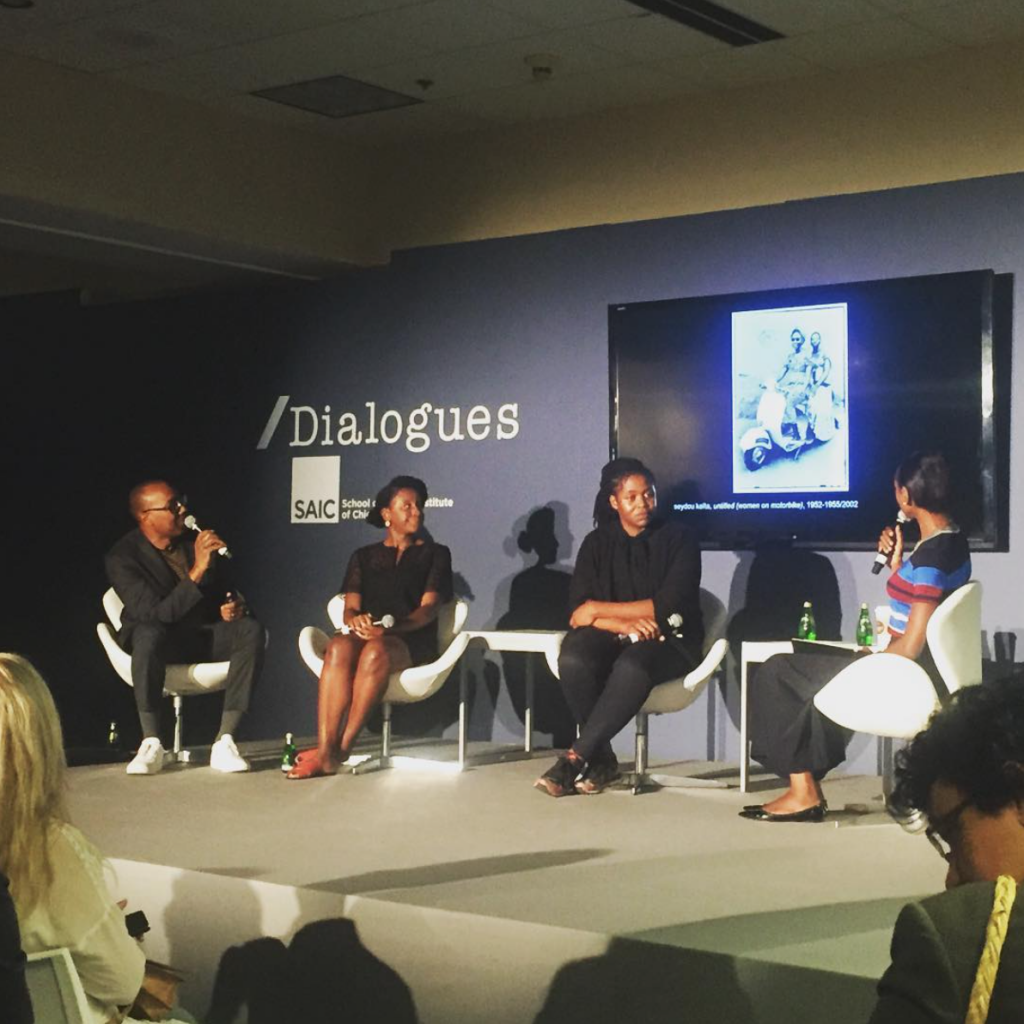 EXPO 2016 /Dialogues: The New Global Economy: Contemporary Art from Africa and its Diaspora in the Marketplace /Instagram: @expochicago

For Umolu, who is Nigerian British, the interest in the continent’s arts landscape could be likened to a return. She spoke of her family leaving Nigeria for England when she was a child and not returning until much later. Learning about Nigeria’s art scene, and then expanding that interest to Ghana and Senegal, has earned her a better understanding of how colonial histories have affected contemporary aesthetics and creative output. Montague, who is Jamaican Canadian, expressed a similar sentiment, noting that Canada has a very small Jamaican population. His curiosity about the diaspora prompted him to begin collecting work, first focused on photography, then expanding into painting and sculpture, and more recently video. Sibande, who was educated, lives and works in South Africa, makes work around images of African women. On a visit to New York, she learned about the first African-American female millionaire, Madam C.J. Walker, who made her fortune by revolutionizing hair care. Sibande’s mother, restricted from many economic and educational opportunities by apartheid, raised her economic standing later in life as the apartheid system was dismantled.

Odufunade, founder of the first international art advisory specializing in contemporary African art, asked about the narratives that inform the circulation of work. Umolu responded by discussing an exhibition she curated while working at the Broad Art Museum at Michigan State University, called “Material Effects: Contemporary Art from West Africa and the Diaspora.” While the exhibition primarily explored how the artists in the show work with materiality, she conceded that without the second part of the exhibit title, the show could have included any artists. Umolu realized that there was a promising prospect in broadening the conversation, despite her commitment to focusing on its regional manifestation.

All of the panelists lamented the gap in understanding around art from Africa, noting that many audiences see only traditional sculpture and artifacts alongside a new generation of artists working in film and video, performance and abstraction, leaving a massive chasm in the art historical record. This belies contemporary African art’s connection to its history as well as the global market. In a passionate plea, Montague encouraged the audience to become or support black art advisors, curators, critics and collectors, emphasizing the importance of having people of color in positions of power to ensure that this interest in African art is established beyond a passing trend. (Lee Ann Norman)