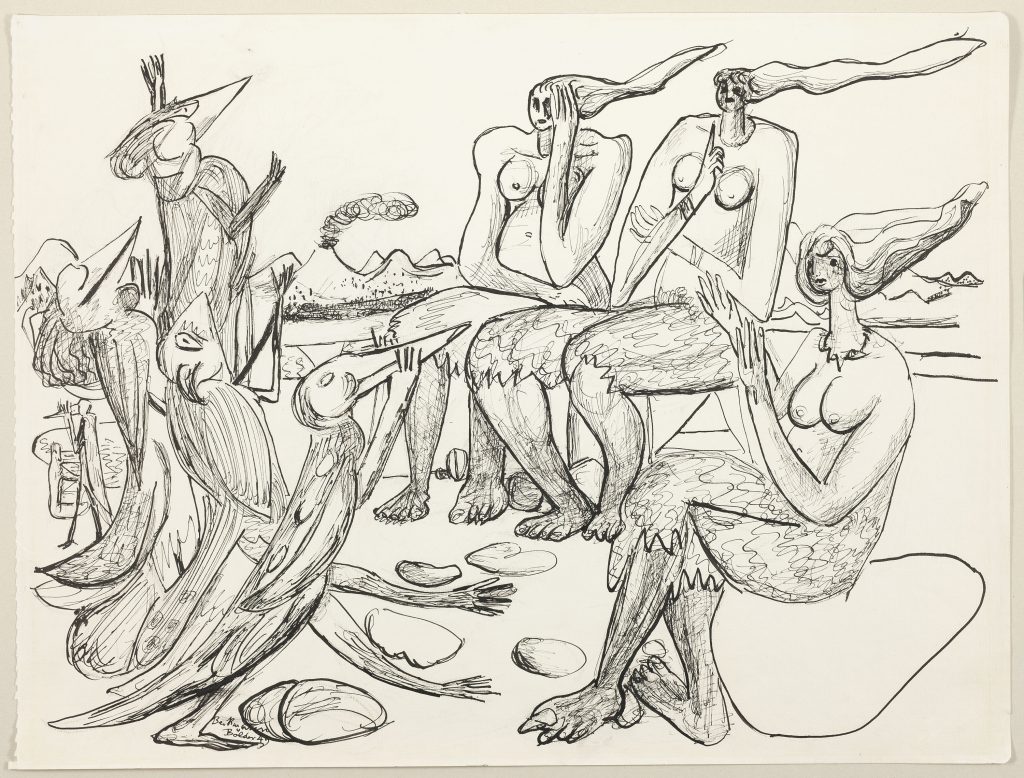 Forming a great collection of paintings requires money, knowledge and taste—in that order. Collecting drawings, however, demands connoisseurship. By that I mean not simply an eye and mind trained to recognize one artist’s hand from another’s, or the authentic from the inauthentic, but an intuition that exceeds the senses. A genuine connoisseur of drawings can rifle through a pile of old paper and extract from it the single masterpiece almost without looking. I know this sounds like nonsense, but I saw it happen: a teacher I had thirty-five years ago, a notable connoisseur of Dutch drawings, while visiting a collector in Utrecht, stuck his hand into a trunk filled with castoff drawings and pulled from it a lovely, overlooked Jan van Goyen seascape.

I mention this because great drawings collections require the talents of such people. Some of them are legendary. One was Harold Joachim, the Art Institute’s curator of prints and drawings from 1958 until his death in 1983. Since then, the department of Prints and Drawings has been led by Douglas Druick and then Suzanne Folds McCullagh. Under their guidance, and with the assistance of Mark Pascale and Martha Tedeschi the collection has grown by some nine-thousand works. The current exhibition features drawings the museum describes as “hitherto unexhibited masterful drawings,” meaning that if a newly acquired work has already been shown, it won’t be seen here. That’s a shame because it prevents a full appraisal of the scope and success of acquisitions since 1991. Absent here, for example, is the great drawing of two upturned, antique heads (probably from the Hellenistic “Laocoon” group) by the Flemish Mannerist, Hendrick Goltzius, or the knockout Lucas Vorsterman “Lot and his Daughters,” made in collaboration with Rubens! You can look up both works on the Art Institute web site and see what I mean. 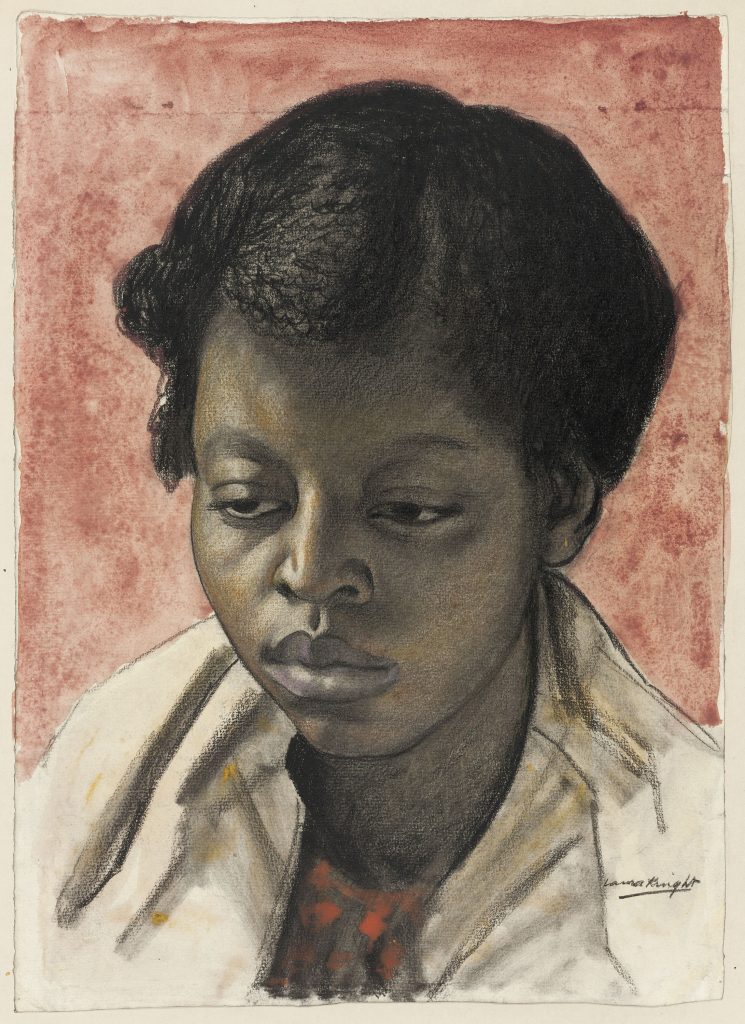 Few of the works exhibited here reach that level of sublimity. To begin with, most of the big names in drawing, such as Goltzius, Jacques De Gheyn, Bartholomeus Spranger, Federico and Taddeo Zuccaro, Tintoretto, the Carracci, Rubens, Van Dyck, Rembrandt and Tiepolo are missing. There is however a lovely little Watteau drawing in red chalk called “Two Studies of a Dancer” (1712-13). Each is shown full-length, three-quarter view, holding up their skirts just enough to reveal a dainty shoe. The Boucher (another artist prized by collectors) is an academie (“Study of a Reclining Male Nude,” c.1750) that was the basis for an etching used to instruct other artists. It is a fine drawing, very similar, but not quite as fine as the drawing in the Wallace Collection in London, probably of the same model.

Also wonderful, but utterly different, are the two drawings by Odilon Redon. The AIC already has one of the great collections of works by this enigmatic artist, so this is a case of building strength on strength. “The Die” (also known as “The Weight of Passions,” circa 1878-82), on paper cut from a small notebook, shows one of the artist’s typical, blocky men balancing a great die on his shoulders. Nobody has the slightest idea what it means though it somehow anticipates the poet Mallarmé’s “A Throw of the Dice Will Never Abolish Chance” (1897), which Redon happened to illustrate. “False Glory” (1885) is an equally peculiar drawing, made with charcoal on tan paper. It shows a giant head, wreathed in laurel with big, somnolent eyes, bordered at right by the bottom of a classical column. Ludwig Meidner’s “Self-Portrait” (1922), drawn with jet-black lithographic crayon is another colossal head. The exaggerated forehead, upcast eyes and narrow jaw make it seem insectivorous, like Kafka’s Gregor Samsa from “The Metamorphosis,” published just a few years before. 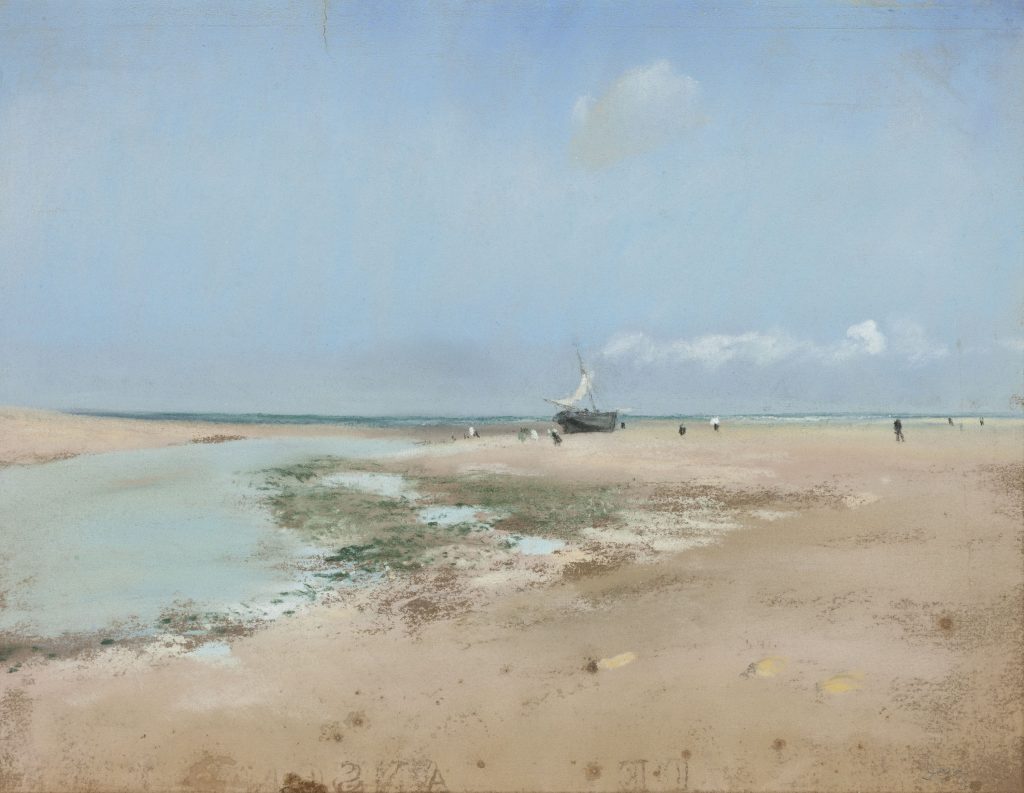 But the bulk of the drawings here are highly finished works—preparatory to prints or paintings or intended to stand on their own—that do not exhibit either the brio or the introspection that makes the medium the subject of the connoisseur’s adoration. The drawing in brown ink and wash by Girodet-Trioson, “Phaedra, Having Declared her Passion…” is a precise rendering of a melodramatic subject from Racine, preparatory to an engraving. The work by Adolph von Menzel, “In a Railway Carriage After a Night’s Journey,” precisely describes the discomforts of modern transit but without Daumier’s irony. Drawings by Mallet, (“Evening Prayer,” circa 1790), Peigne (“Study of Grapes,” circa 1800), Zingg (“Corner of a Meadow with Reeds and Other Plants”, circa 1800), and Hetsch (“A View in San Lorenzo,” 1820)—you are not alone; none of these artists are household names—may be described as meretricious.

The two stars of the exhibition, Fantin-Latour’s “The Anniversary—Homage to Hector Berlioz” (1877, pastel and watercolor over lithograph) and Grant Wood’s “January” (1938, charcoal and white conté crayon), are each dress rehearsals for paintings. The former is an allegory of the expected kind including two figures representing Fame (trumpet at their feet and laurel wreath in hand), a woman in white holding flowers, and a tomb or monument. The latter drawing depicts haystacks half covered in snow. They all list to one side, like the sad Scarecrow from the Wizard of Oz, blown by the wind and pining for Kansas. Both drawings are excellent and enjoyable to be sure, but their acquisition did not require the rarefied powers of the connoisseur and thus don’t provide the consonant pleasure. The Art Institute has one of the great drawings collections in the world, and the last twenty-five years have seen some major acquisitions—but only some of them are to be seen in this exhibition.