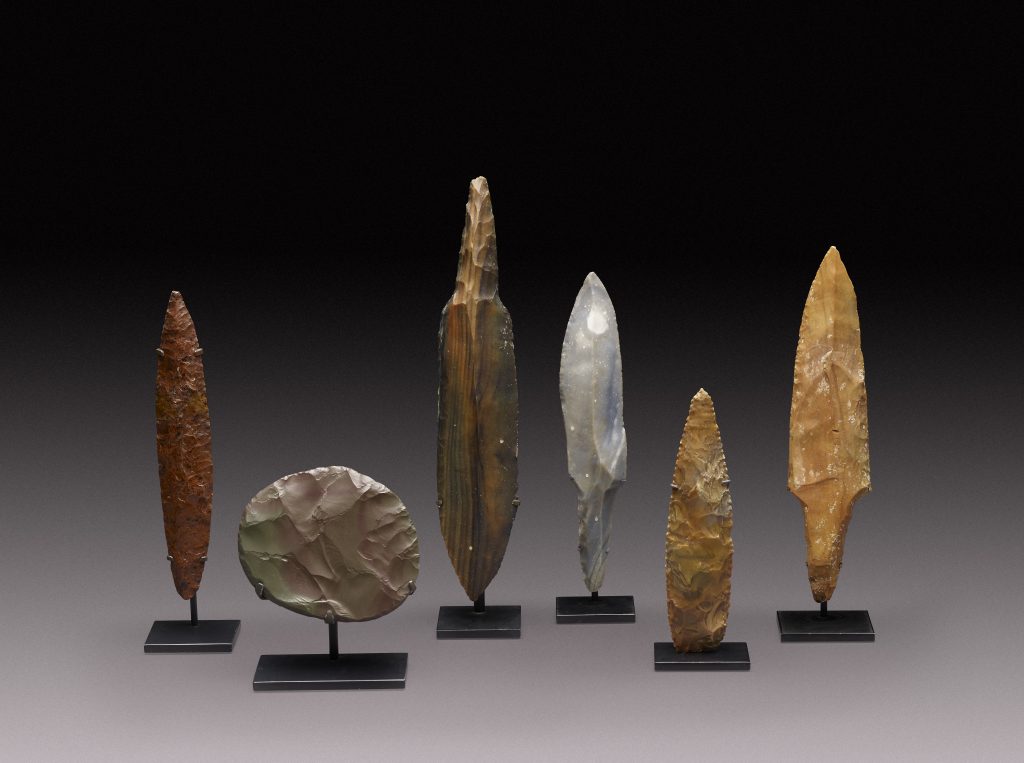 Two recent scholarly trends have construed our relationship to stone in different ways. The first, influenced by actor-network theory and object-oriented ontology, is exemplified by Jeffrey Jerome Cohen’s “Stone: An Ecology of the Inhuman” (University of Minnesota Press, 2015). In this view, lithic objects have their own agency and timescales. Listening to the time and force of stones can help us destabilize anthropocentric thought. The second trend, popular in archaeological circles, increasingly tries to construct more nuanced pictures of past human society by examining man-made objects. Because of their durability, these objects tend to be made of stone. Heidegger’s concepts of das Zeug (usually translated as “tool”) and Zuhandenheit (“readiness-to-hand”) are important to both, for the philosopher bequeathed an analytic vocabulary to art history as well as metaphysics. It’s an exciting time to study the complexities of stone tools.

This show, which gathers stone tools from settings as diverse as nineteenth-century Hawai’i and prehistoric Morocco, is a reminder that less sophisticated views of these objects still exist. Framing them as “mysterious, tactile things that melt into one’s hand and connect one with the very beginnings of humanity,” the show pairs the worst pop philosophy of the first trend described above with the most naïve positivism of the second. In order to better rid the artifacts of their historical specificity, the gallery has grouped them by formal properties—color, silhouette, degree of spikiness. This mode of display is reminiscent of the fetishization of “primitive” art at the turn of the twentieth century and indeed is something we should perhaps expect from a gallery that specializes in “ethnographic art.” While it is true that museums and galleries can serve as productive engines for looking, disclosing surprising conversations between disparate artworks, pure formalism makes for an ethical minefield without the corrective lens of historical criticism. Amy Powell’s “Depositions” [Zone: 2012] is an example of this done well.

By severing these objects from any socio-political context, the gallery participates in the long, problematic history of aestheticizing indigenous objects. When the gallery pairs a mace head from pre-1945 New Guinea with a prehistoric mace head from Peru, it wishes away a complex of colonial predation. The nineteenth-century Hawai’ian poi pounders remind me of recent work by indigenous artists like Nicholas Galanin, who have pointedly critiqued the ways white America still sells and collects these grim trophies of Western rule. No good museum would conscience this strategy of display; why should critics let a commercial gallery off the hook? These stone tools deserve better. (Luke A. Fidler)