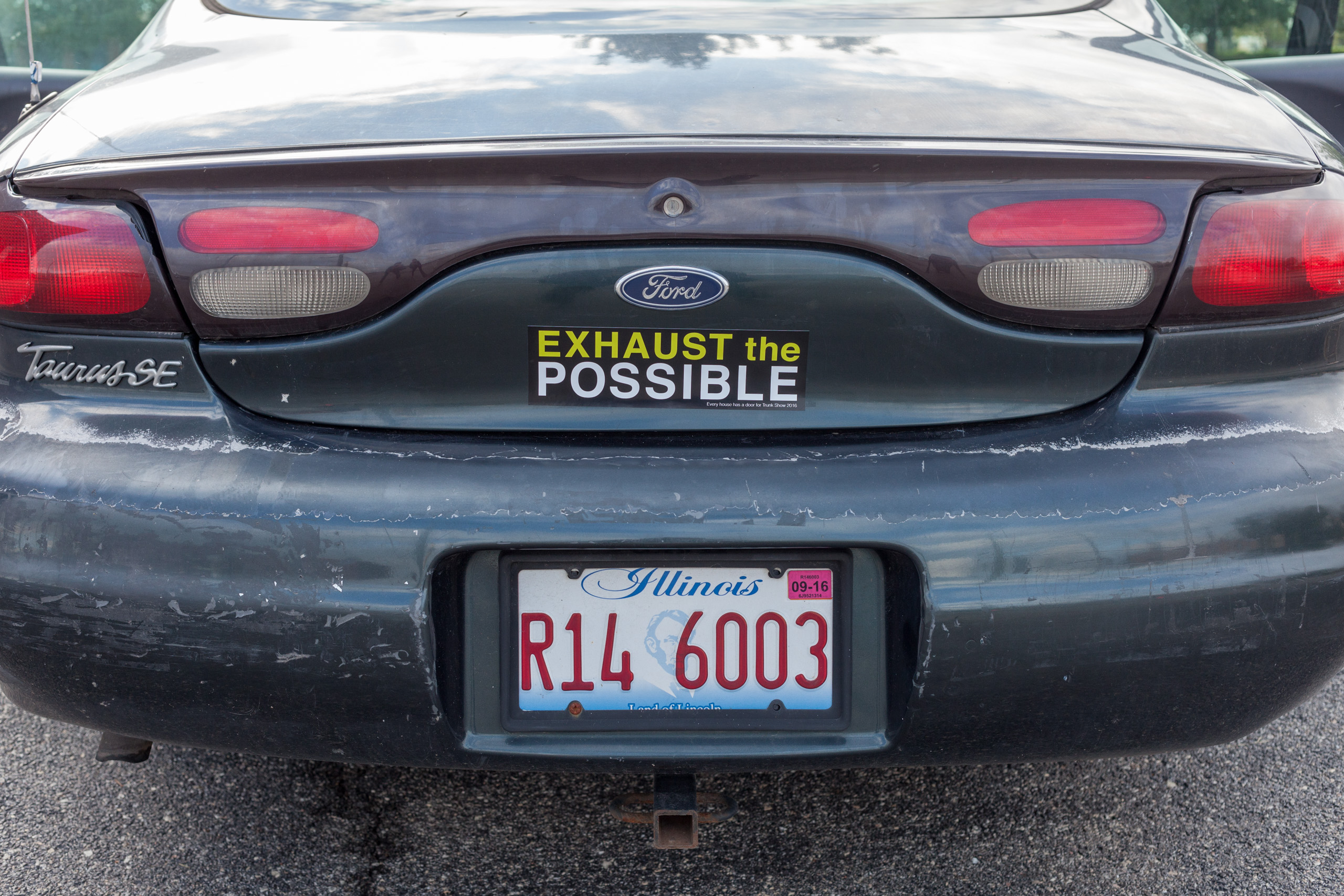 Every House Has A Door for Trunk Show, Fall 2016 /Photo: Dan Miller

After I first moved to Chicago from the East Coast a decade ago, I vowed I would be gone before the year was out. I hated it, all of it—the weather; the sprawling, disjointed cityscape; the Midwestern courtesies that felt so insincere to a kid from New Jersey. A year later, when I had my first chance to leave, I had already fallen too deeply into something like love for this strange city.

Since then, I’ve thought of leaving more as an enduring experience and less a discrete action. In more than a few of my longer reviews for this forum, I’ve discussed depletion, withdrawal, death and dropping out—dark stars among a larger constellation of loss. For any Chicagoan among the art communities here, loss is a permanent feature of the horizon. Each year, some of the most talented art denizens leave here for that promising coast or that European art capital after making their names and their lives in Chicago. For instance, only weeks after Newcity Art nominated him as one of Chicago’s “Breakout Artists” this spring, painter Andrew Holmquist announced that he was decamping for Berlin. More saliently, Hamza Walker, director of education and associate curator at the Renaissance Society for twenty-two years, last month announced his move to Los Angeles to become executive director of LAXART, a youngish, nonprofit art space. Some of us saw this coming after longtime executive director and chief curator Susanne Ghez retired in early 2013 and was replaced by Solveig Øvstebø, after which Walker relocated to Los Angeles—part-time, we were assured—to co-curate the major biennial “Made in L.A.” With change of leadership comes a change in the heart and body of the institution, a form of renewal that is as necessary as it is painful.

Walker’s move leaves a huge gap in the curatorial fabric of Chicago, but the upshot of our loss is twofold. First, it takes a departure of someone as deeply imbricated as Walker is in the local scene to stir up the sediment of complacency that so quickly settles in an economy that seeks stability if only for the sheer fact that everything about it is so damn uncertain. After hearing the bittersweet news, I dug up some history on Hamza and found this revealing quotation from an obscure University of Chicago Alumni Magazine profile on him:

Hamza Walker’s worst nightmare, he says, is “realizing that you are still in Cobb Hall where you took all your undergraduate classes. … And I live it every day!” Walker, whom the New York Times has labeled one of the seven most influential curators in the country, is director of education and associate curator for the Renaissance Society, the noncollecting [sic] museum of contemporary art on Cobb Hall’s fourth floor.

Reading that quote, I felt a kind of empathy with Walker’s predicament. In a much smaller way, I’ve shared his experience. After graduating from Northwestern University and moving far away for a few years, I returned to Evanston and took a job as an assistant curator at the Block Museum of Art, my alma mater’s museum. For three years, I walked to work passing buildings and quads imbued with memories so personal, so sentimental they could hardly be written. In a space flush with fresh, young blood every year and where familiar faces are always fleeting, you’re prone to feel stuck, to feel prematurely spent. 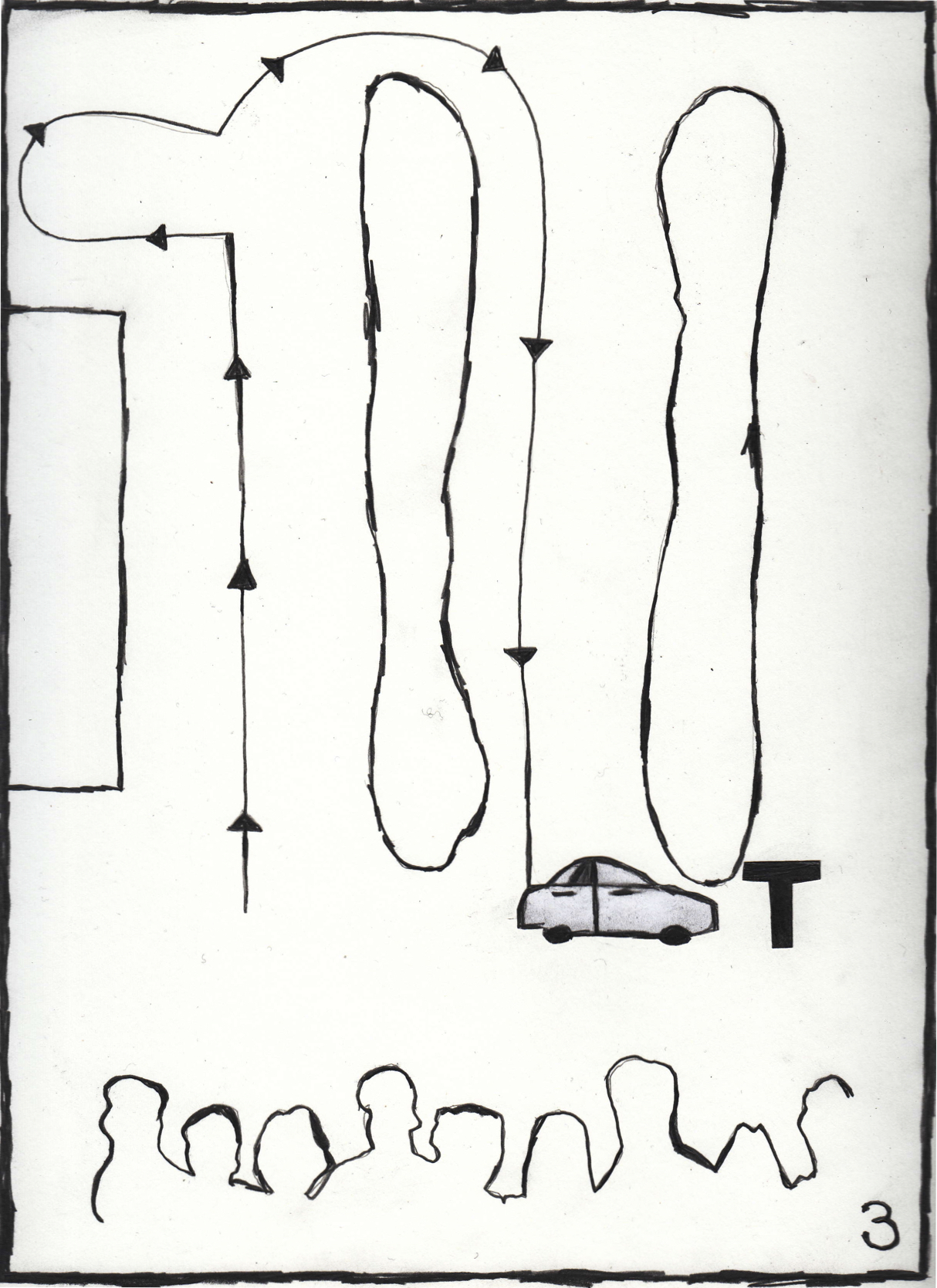 Every House Has A Door, Choreographic notes for Trunk Show performance, Fall 2016

Secondly, to feel loss is to recognize an absence that traces a need you could never before understand. This weekend, I went down to Pilsen to catch the final opening of Trunk Show, an itinerant, automotive gallery organized by Raven Falquez Munsell and Jesse Malmed. The space is the bumper of a 1999 forest green Ford Taurus four-door upon which Munsell and Malmed have for three years affixed a series of bumper stickers commissioned from Chicago-area artists. One at a time, the stickers adorn this beat-up beater, presented in a lively opening that, apropos of Chicago’s dibs-crazy parking woes, happens wherever they can brake for a few hours and throw a good party. They’ve pulled up everywhere from the Hyde Park Art Center to Sector 2337 to under the California Blue Line station. This final time, they staged their opening in the capacious parking lot outside Mana Contemporary, Chicago’s high-end warehouse studio complex at the edge of the still industrialized strip of the Chicago River’s south branch. Every house has a door, a performance collective, designed the final sticker and choreographed a closing performance.

When I arrived, a flock of people were gathered along the far side of the lot, gazing in my direction. The car, to my left at the far edge of the lot, was crawling up the parking lane ever so slowly. At intervals, it stopped and the five performers piled out and walked in separate directions, stoically facing away from the vehicle. Returning to it, they switched seats and a different driver steered the next segment. On the last bend, they pulled up to a median and disembarked. Popping the trunk and momentarily revealing the everyday junk that we all carry with us, a performer removed a small wooden stool before closing it up. Munsell, beckoning the crowd to follow, approached the vehicle and kneeled before the bumper, ceremoniously applying the final sticker. Stepping away, the design revealed itself: “EXHAUST THE POSSIBLE.” A ukulele number by Madeleine Aguilar, who emerged from the crowd and took the stool, played out the performance. 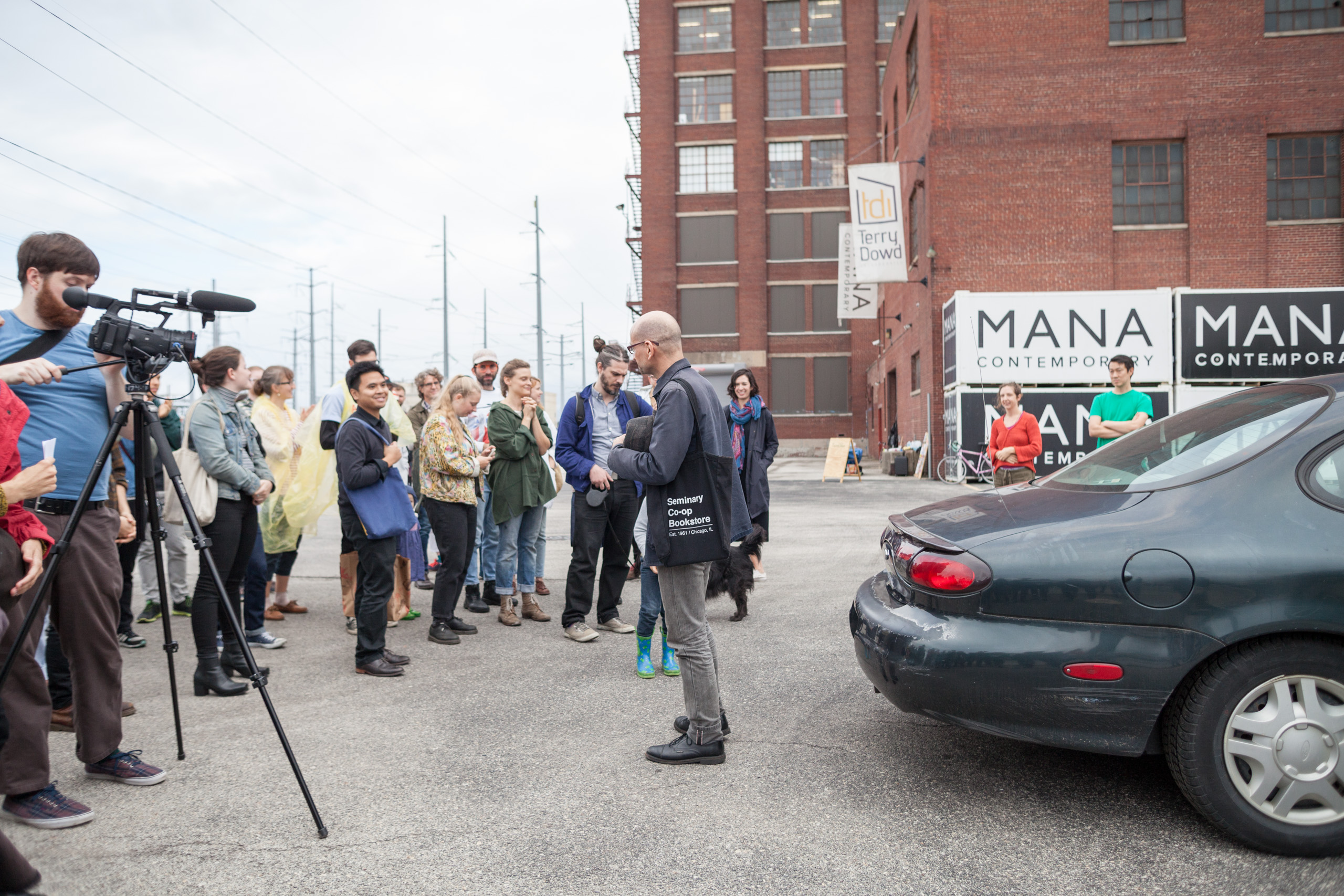 Every House Has A Door for Trunk Show, Fall 2016 /Photo: Dan Miller

By their very nature, Trunk Show openings have always also been closings. The exhibition is the event itself, and getting the monthly sticker in the mail with its press release (they offered a subscription service) always felt to me like receiving the exhibition announcement after the fact. True to form, the press releases, archived on the gallery’s tumblr page, often begin with a recap of what happened at the previous month’s opening before segueing into an introduction to the next show. In this way, the openings joined together in an iterative chain of closure and renewal. To boot, the writing is funny and offbeat, unlike anything else in the world of gallery-ready copy.

How do you see a show that doesn’t exist, and maybe never did? The conceit of Trunk Show played with this problem of ephemerality that, if any living artist were to be honest, haunts the artistic process at its very core: How to bring new attention to tired, old things, and how to reinvent the world one image at a time? Exhaust the possible, but of course. In this sense, the final opening was Trunk Show’s most successful yet. A performance by one of Chicago’s most thoughtful and dedicated collectives closed the gallery with the kind of generosity that only comes from an unrepeatable gesture. Even the name—Every House Has A Door—resonates with the bittersweet sense of loss in which every departure is also the surest guarantee of a future arrival. A bumper sticker slogan comes to mind: Trunk Show is dead! Long live Trunk Show!