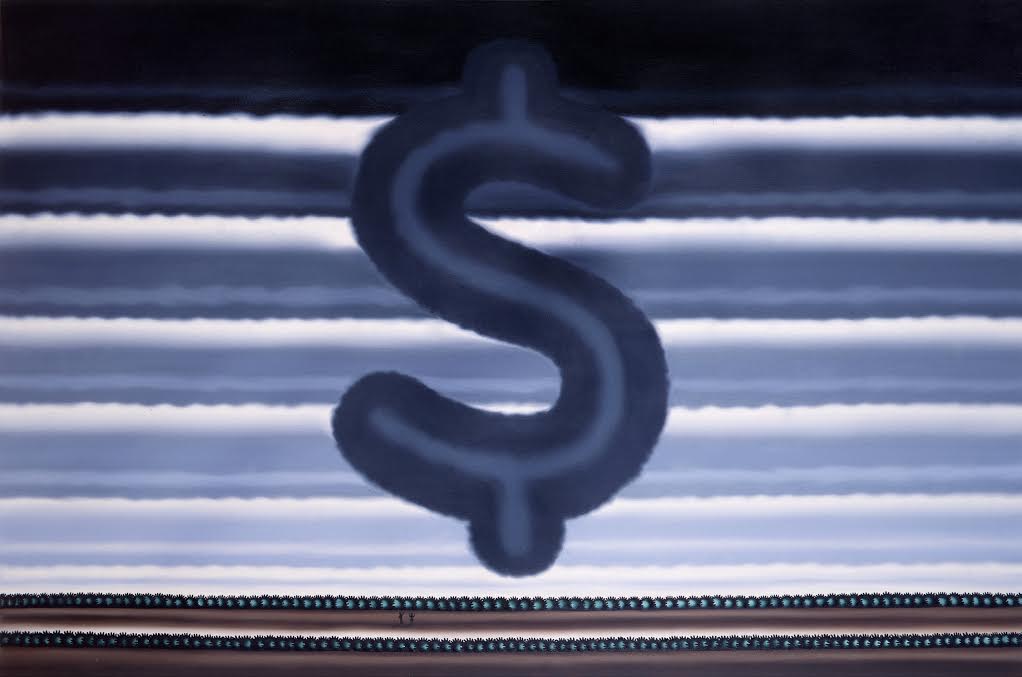 Roger Brown died on November 22, 1997, at the age of fifty-five, from AIDS-related complications. Thirty-four years earlier to the day, John F. Kennedy was assassinated. It was the type of news item Brown might have depicted in his work, a significant political moment imbued with many layers of cultural nuance. It was also the type of event that fascinated one of Brown’s contemporaries, Andy Warhol. “Politics, Rhetoric, Pop,” a stunning show on view at Kavi Gupta, combines the work of the two artists, comparing and contrasting their interests and approaches in a way that forces the viewer to consider each of them anew.

JFK’s death makes an appearance in the show in Warhol’s “Jackie,” a plaintive, silkscreened portrait of the late President’s wife. Warhol made over three-hundred pieces of Jacqueline Kennedy, using media images of her circulated before and after the assassination. In this piece, her gaze is directed away from the camera; her close-cropped face set against a sky blue background. “Jackie” hangs in the first room of the exhibit, alongside Brown’s “The War We Won,” depicting George Bush and Mikhail Gorbachev shaking hands over the end of the Cold War. 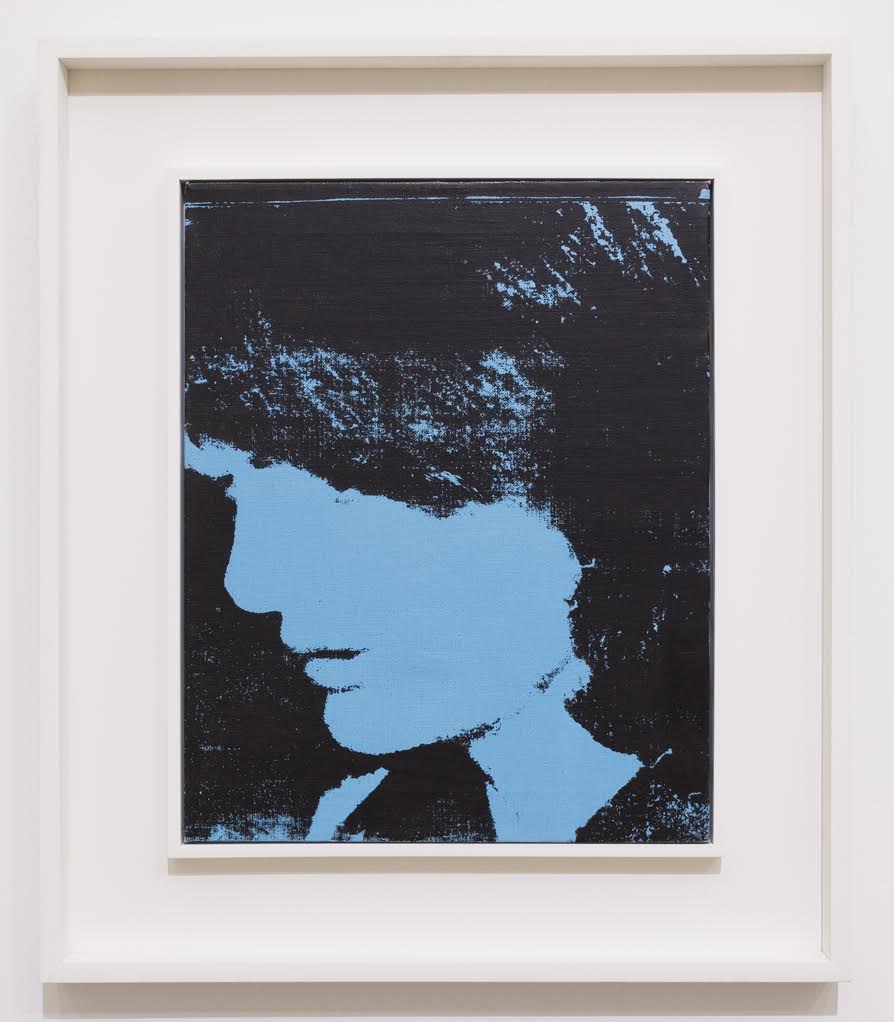 In the next room hangs Brown’s “Aha! Heterosexuals Fuck Too,” a massive portrait of Magic Johnson created after the athlete announced his HIV-positive status. Made in 1991, it’s meant to be a caustic jab at the homophobia of the religious right. Throughout the exhibit, Brown makes his politics plain. He depicts the savings and loan industry collapse and bailout with a piece titled “Government Smokescreen,” complete with a bubble that reads “Cover Up” in the corner. Warhol also has works in the exhibit that show his interest in capitalism, “$ (1),” and pop culture, as with the “Mario Borsato” and “Georges Marciano” portraits. “One clear difference between them: Andy Warhol was a voyeur and removed himself from his work, where Roger was fearless,” Kavi Gupta says. Gupta curated the show after his gallery took over representation of Brown’s estate late last year. 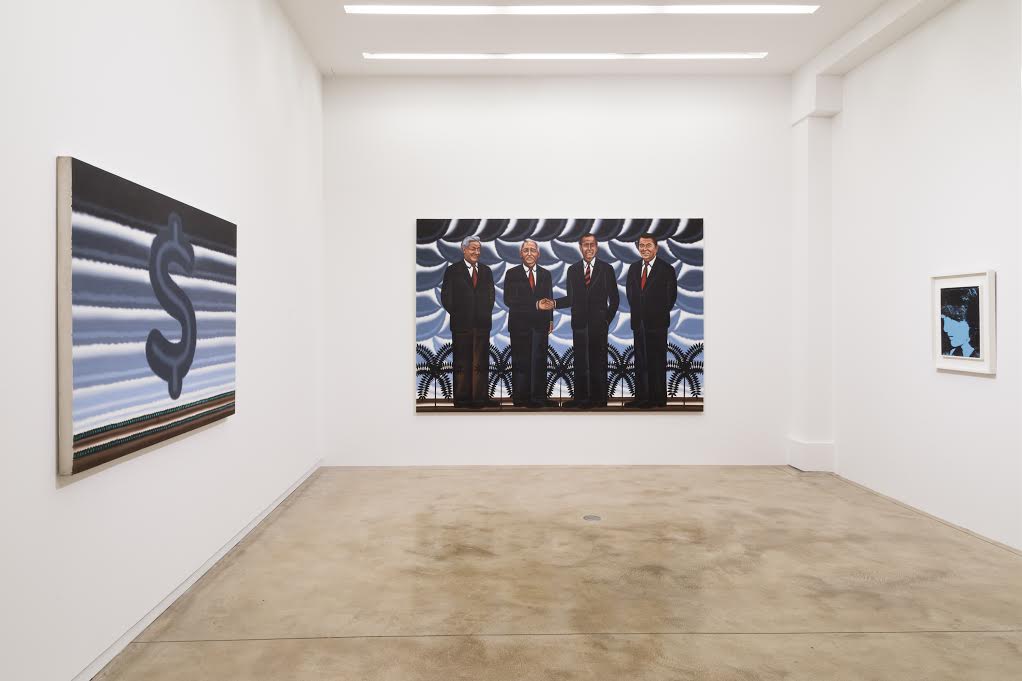 The last rooms of the exhibit hold some of the most poignant works. Occupying the center of one room sits Brown’s “Twin Towers” sculpture. Made of painted wood and standing nine-feet tall, the piece is prescient. The windows are painted bright yellow, as if being viewed at night, and figured silhouettes can be seen on many of the floors. The sculpture sits beside a few of Warhol’s Brillo boxes, a work of a similar construction. Also on view is Brown’s “Burned Hills May-October 1997.” It’s the last painting he ever made. In it, huge, flat black hills are rimmed with flames, while miniature firefighters spray water at them from the bottom of the painting. “Flaming hills represent a number of things,” says Lisa Stone, curator of the Roger Brown Study Collection at the School of the Art Institute. “The fires that were occurring right around his home. Also, as his last painting, there’s something incredibly futile—these fires that can’t be put out.” The same could be said of Brown’s work, which refuses to become irrelevant, searing itself into our minds almost twenty years after his death. (Kerry Cardoza)