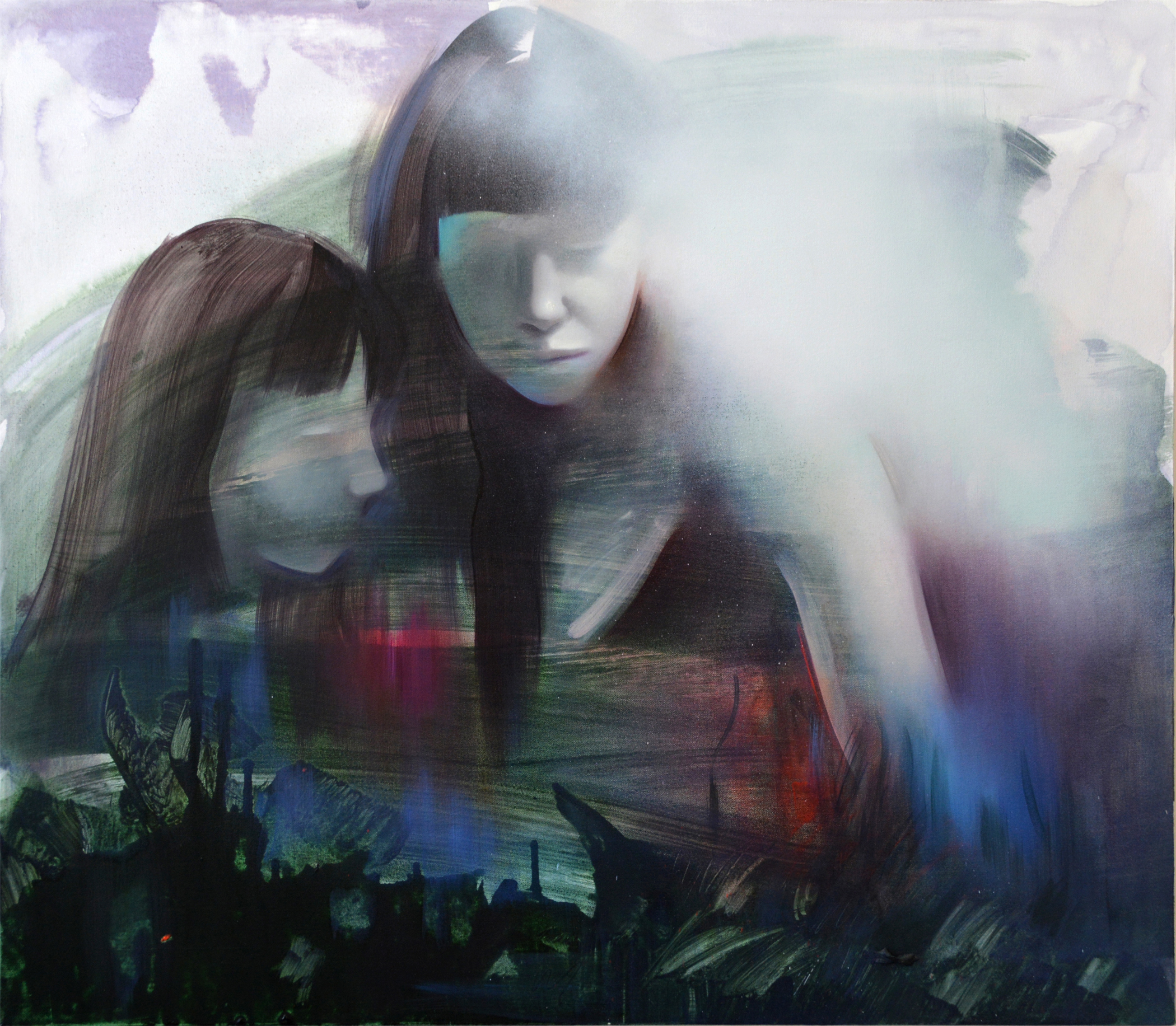 Karen Azarnia’s dreamy paintings materialize out of the fog of her memory. Pink puddles slashed with broad, deep blues give way to fragments of ghostlike human figures. Cheekbones, shoulders and hands glow with the eerie, cool whiteness of a computer screen or an early morning window. Flashes of white mist obliterate large sections of many paintings, like a sci-fi lens flare.

Azarnia was recently included in the Chicago Artists Coalition’s “Annual” exhibition and currently has work on view in “Expanding Borders,” a group exhibit at Olivet Nazarene University in Bourbonnais. A full-time new mom during the day, she teaches painting at the School of the Art Institute of Chicago and works in her studio at Mana Contemporary at night. 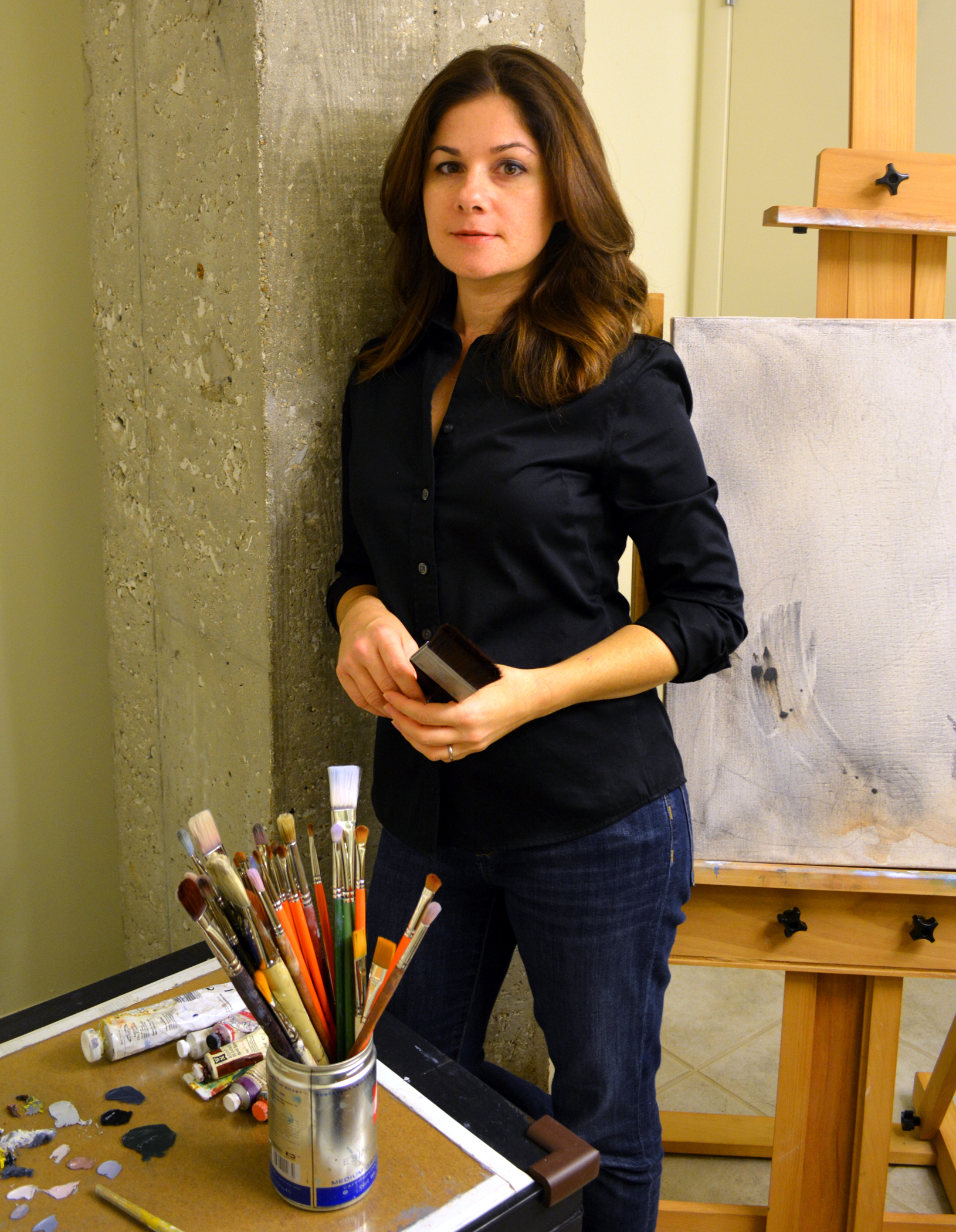 Karen Azarnia in her studio.

Coming from an observational and rigorously trained artistic background enables Azarnia to dominate the paint, to work with it instead of fighting against it. Her work appears to float with suave effortlessness, buoyed by a quiet melancholy.

“We’re all subject to the passage of time. Things are ephemeral and fleeting, and we don’t necessarily have control over them,” she explains during a recent studio visit. “Painting is where I put my memories. The body has a very long history and with it comes a kind of cultural memory, art-historical memory, personal memory. I’m highly aware of memory now as a new mom. I’m seeing a small person develop all these cognitive functions for the first time. Thinking of memory through that perspective is super fascinating to me. Perception is fluid and with it, memories. They’re subject to change and reinterpretation as we gain new experience and grow as people. I’m trying to express these intangible things. I think that’s okay—to express emotion.”

While working on a breakthrough painting titled “Barely” in 2013, Azarnia discovered she can visually mimic the feeling of forgetting by whiting out areas of her paintings. Since then she’s been playing with techniques and methods of obscuring the image, drawing primarily from Abstract Expressionism. 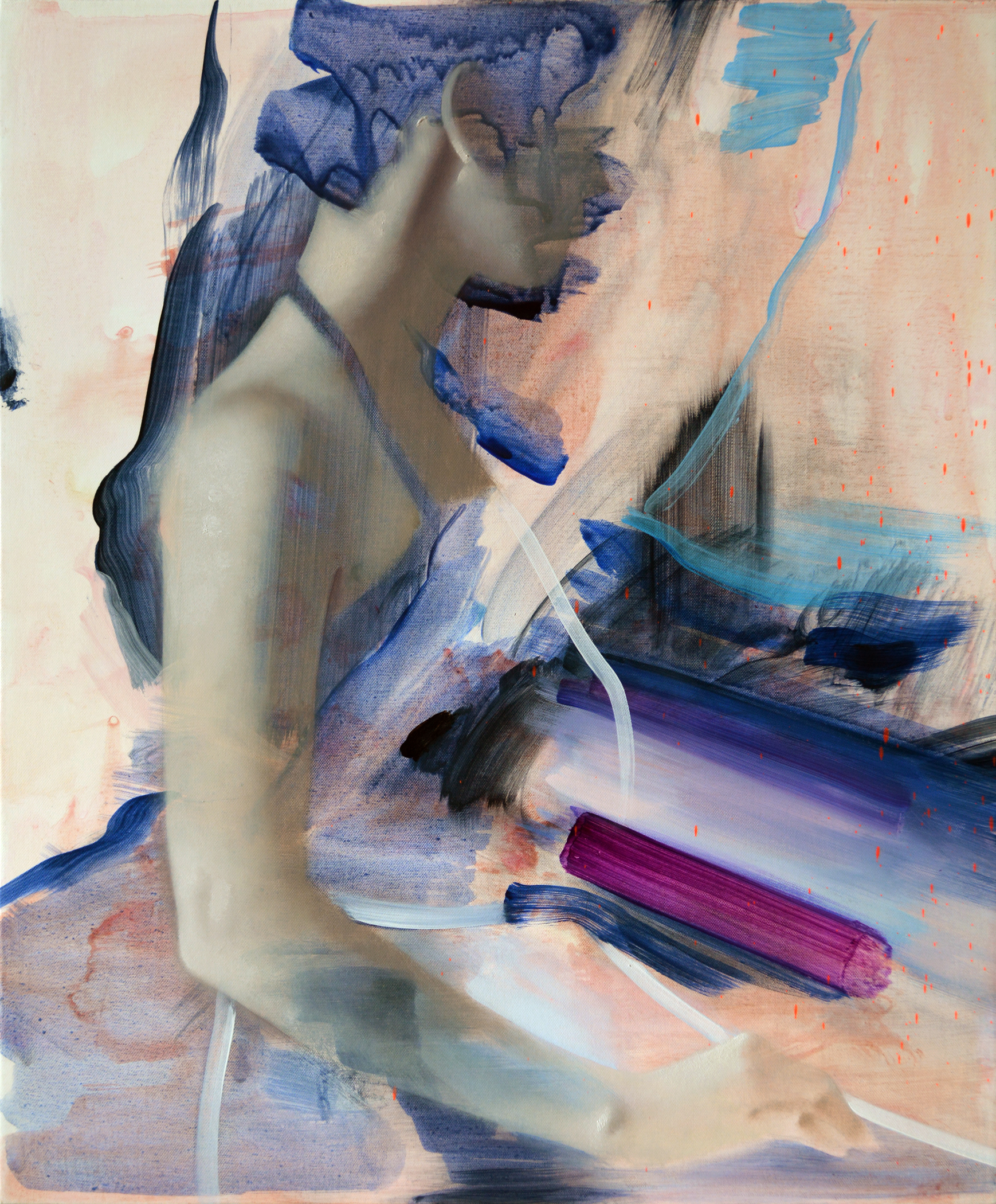 “You have areas where the figure is described and other areas where it’s sort of vague, and then you have the more expressive paint that kicks in, and that’s the kind of conversation I’m really interested in. Half of the painting is the way it’s made and the fabulous, amazing, wonderful fun of that.”

Azarnia’s representational technique is heavily influenced by the nineteenth-century French painter Eugène Carrière, who was described by a patron as “a ghostly realist, a psychological painter, who makes the portrait, not of a face, but of a smile.” Azarnia’s similarly psychological work departs from straightforward portraits, relying on body language, often expressed through the hands. How better, for example, could the tenderness of lovers be articulated than through a glimpse of their entwined fingers? Our fingertips are one of the most sensitive parts of our bodies, which might be part of why we’re so attuned to them. Azarnia’s hands, painted and painting, are profoundly expressive. (Kelly Reaves)

Karen Azarnia’s painting was recently included in the Chicago Artist Coalition’s “ANNUAL” exhibition. Her work is currently on view in “Expanding Borders,” a group exhibit at Olivet Nazarene University in Bourbonnais.