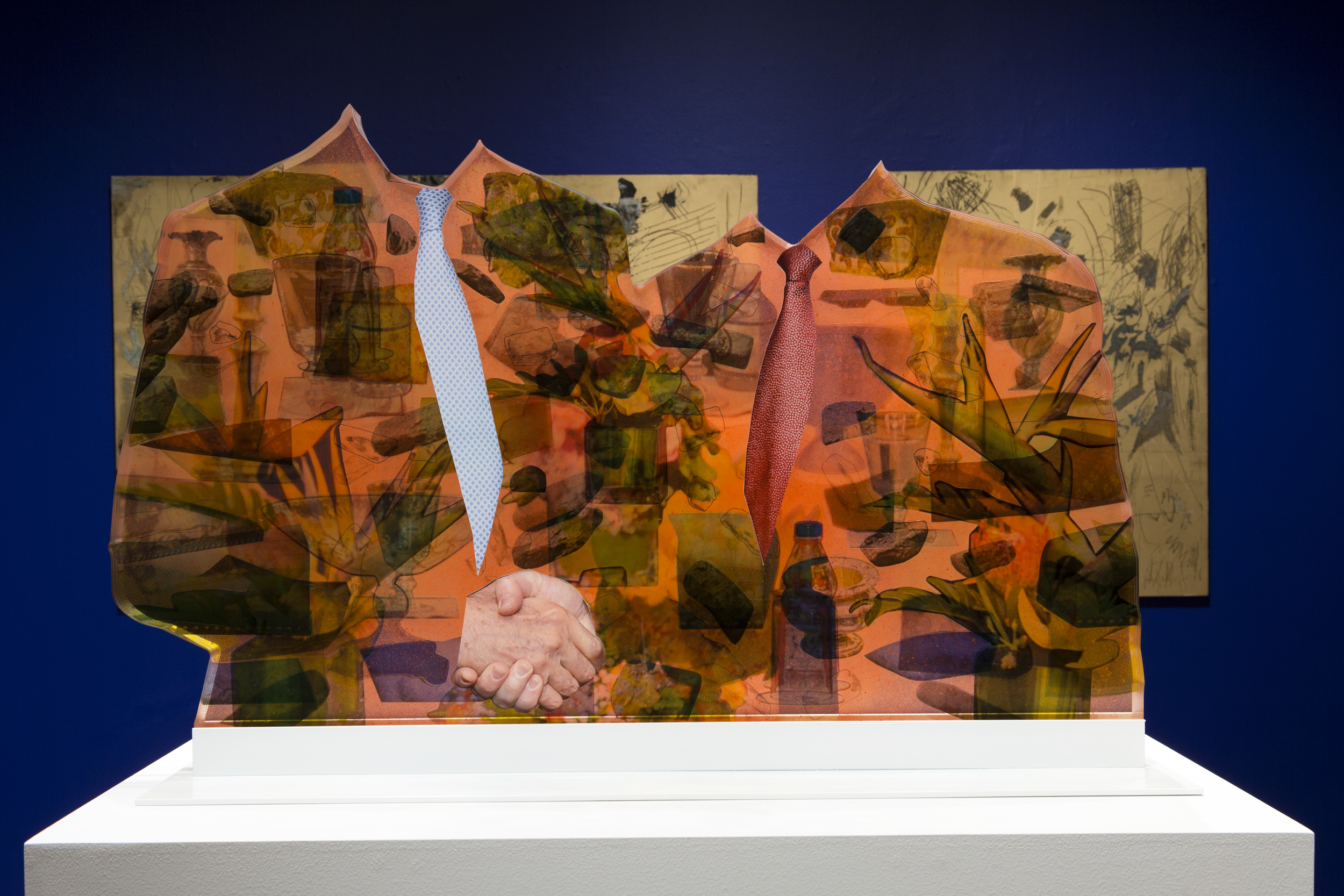 “If Nobody wins, then Nobody loses,” hippie prankster Wavy Gravy told a crowd of onlookers outside the White House in November of 1980. His supporters, from the Yippie and anarchist ranks, were unimpressed by their choices for president that year: Ronald Reagan, Jimmy Carter and John B. Anderson. Nine presidential campaigns later, “Nobody for President” seems as topical as ever.

The works included in “Sapphire,” up now at the Weinberg/Newton Gallery, examine these same democratic sentiments from a lens that is similarly critical and playful. The show’s name plays on the tradition of the gemstone as the forty-five-year wedding-anniversary gift. After all, we are about to elect our forty-fifth president. For the occasion, the walls of the gallery have been painted a rich blue. Weinberg/Newton partnered with Common Cause Illinois for this exhibition; each show they stage is in collaboration with a social justice organization. Common Cause, a national nonpartisan organization, focuses on issues of civic engagement. Locally they have helped pass a state resolution to overturn Citizens United and have helped create online and same-day voter-registration systems, among other progressive initiatives.

“We picked this exhibition at this time because of where Common Cause is with their work,” says Nabiha Khan, the gallery’s exhibitions research and studio director. Of course, when they started planning the show a year ago, they also knew it would coincide with the election. “With the type of election we’ve been having, the sort of undertones are so much more apparent than I think I could have predicted,” she says.

One of the most prescient projects in the show, “Some Concerns About the Candidate,” by the Chicago-based artist Deb Sokolow, hangs in the first room of the gallery. The mixed-media pieces tell the story of a fictitious candidate running for U.S. Congress who enlists the magician David Copperfield as a campaign consultant. Based on the saga of the cult leader Jim Jones, the story of the candidate is equal parts outlandish and ominous; Sokolow began the project in 2013, and has created new pieces this year for this show. The campaign story is being narrated in handwritten asides by a protagonist referred to only as “you.” “You’ve angered the inner circle.” “Jim had a waterbed in his room. You know he’s going to be president one day.” 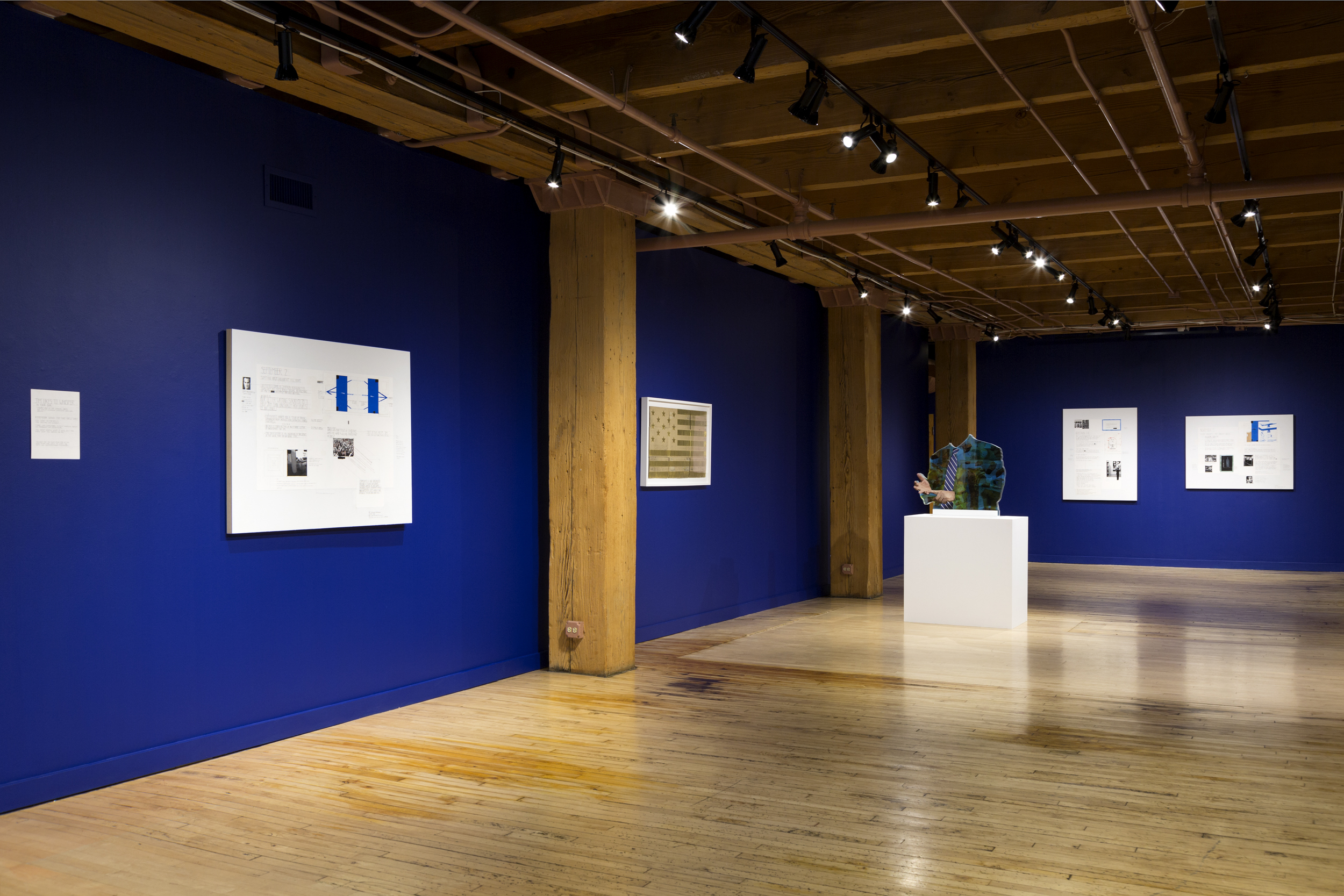 In one piece in the series, set on “Election Eve,” the protagonist finds a notecard from the candidate with “Tactics for Controlling the Minds of Others.” It lists tips such as, “Surround yourself with those who will willingly do your dirty work,” and “Create paranoia.” The pieces, laid out like a diary, are made of photos, drawings, floor plans and handwritten notes. At times they are reminiscent of Raymond Pettibon’s work, the sinister messages rendered clearly by the artist’s hand.

Danh Vo’s “Pao Soft” also hangs in the first room. The sole work by the artist on display, “Pao Soft” is a cardboard American flag, the stars and stripes painted with gold leaf. The flag’s fifty stars have been swapped out to show only thirteen, recalling our country’s original colonies. Created in 2010 and on loan from the University of Chicago’s Booth School of Business, the gold of “Pao Soft” is beautifully offset by the royal blue of the walls. The Mexico City-based artist, who fled Vietnam with his family in a homemade boat following the war, often addresses themes both political and personal. For instance, his “We the People” sculpture consists of hundreds of pieces of a fragmentary replica of the Statue of Liberty, made in China from thin sheets of copper.

In the back rooms of the gallery, the Chicago artist Jason Pallas invites viewers to scrape away a layer of golden coating that completely covers his paintings. Coins are available for the scraping, and flakes fall to the floor like the detritus of a spent lottery ticket. The gallery’s cleaning staff have been instructed not to clean up the debris. What began as pristine gold pieces have begun to reveal historical images of American political moments, such as the March on Washington. “These moments can’t be realized without participation,” Jeanne Donegan, an assistant at the gallery, says of the work. 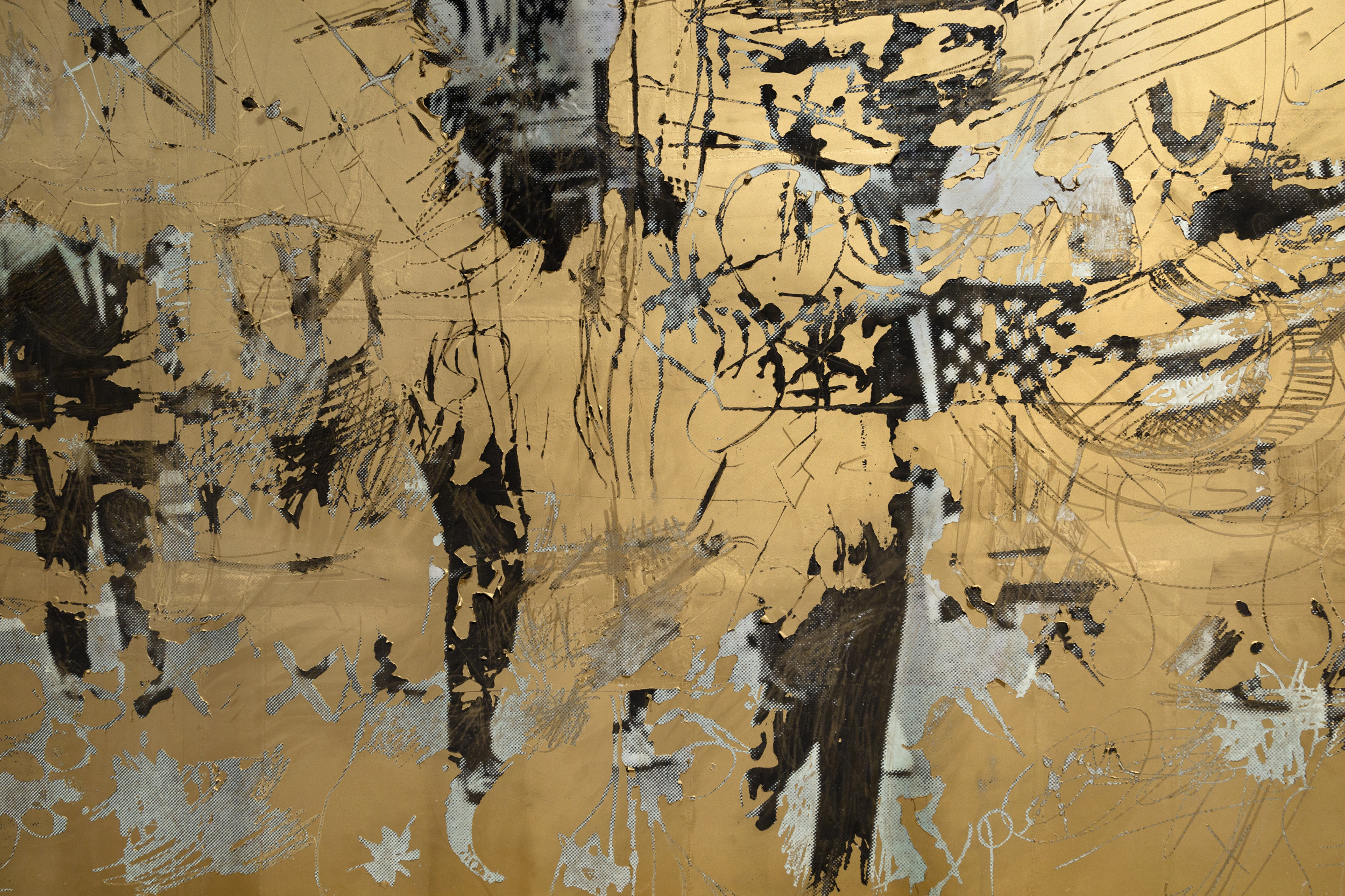 Also on view are Anna Elise Johnson’s sculptural forms, made of acrylic and resin, that take on the abstract notions of power and authority. Using layers of India ink, spray paint and digital prints, her works transform familiar images: two suited men shaking hands for a photo op, another suit gestures with his hands, as if listing off a talking point.

By partnering with Common Cause on this exhibition and its accompanying programming, which included a debate-night viewing party, Weinberg/Newton is doing its part to help stimulate political conversations. “Common Cause’s work is also civic engagement,” Khan says. If we want to envision a better world, she goes on, “We need to be active to some extent and help it become that thing.”

She doesn’t see a problem with bringing together art and social justice issues. “It’s not to say that one is better than the other,” Khan says. But by helping support and promote the work of Common Cause, the gallery is trying to offer a variety of opportunities for people to become more civically engaged. What’s the alternative? Is political apathy useful? This election season especially, it can be a challenge not to agree with Wavy Gravy’s witty truisms. “Nobody keeps campaign promises.” “Nobody in Washington is working for you.” “Nobody should have that much power.”