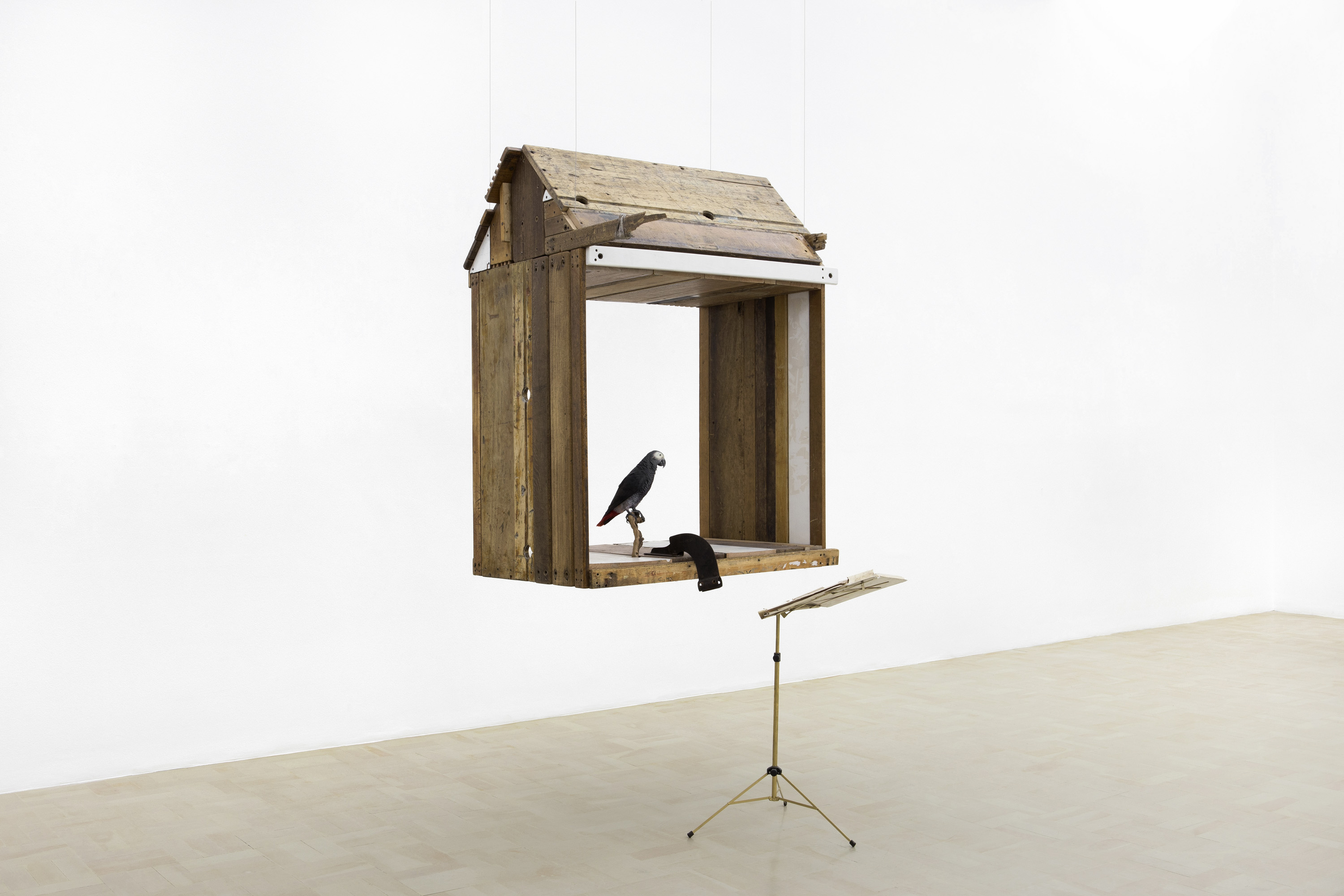 Kemang Wa Lehulere, “One is too many, a thousand will never be enough,” 2016.

People don’t talk about “postmodernism” anymore for the simple reason that they no longer believe it exists. All that hot air about the end of history turned out to be mere pride: one generation insisting it had a greater claim to saliency than the previous one.

But a few concepts from the period survive and are helpful in understanding the work of the young South African artist Kemang Wa Lehulere. His installations, videos, drawings and sculptures are marked by anachronism, pastiche and absence.

To take the last first, visitors to the exhibition might feel as if they have sat down to see a movie thirty minutes after it has begun. The scenes seem connected, but you can’t tell how. There are open suitcases with grass growing from them, each valise guarded by broken ceramic dogs, car tires with crutches for axles, a wall drawing of a pencil sharpener, a video of a burning cigarette, a minimalist stage-set with props. The effect is frustrating and unsettling. “Something is happening here,” to quote Bob Dylan, also this year’s Nobel Prize winner, “but you don’t know what it is.”

As for anachronism and pastiche, they are perhaps inevitable when it comes to an artist from a nation that only achieved real independence in 1994, when free elections signaled the end of apartheid. The struggle over culture and identity that other countries routinely experienced post invasion was taken up with a fury in South Africa. And it is ongoing, as suggested by Kemang’s “One is too many, a thousand will never be enough.” The construction, a cross between Rauschenberg’s “Canyon” (1959) and Ernst’s “Two Children are Threatened by a Nightingale” (1924) consists of salvaged school desks, a music stand, a grey parrot and some cassette tapes titled “American Accent Program.” The audio insinuates the concept of “hegemony,” the idea that authority in a nation derives not just from military power but from perceived cultural superiority, in this example, in comportment or speech. The indigenous person speaking a local argot can only “parrot” the colonizer, and thus must always appear inadequate. The use of the real dead parrot however (a nod to John Cleese as well as a deplorable speciesism), undermines the political lesson—the bird’s struggle for hegemony is past; its history is ended. (Stephen F. Eisenman)

Through January 16 at the Art Institute of Chicago, 111 South Michigan