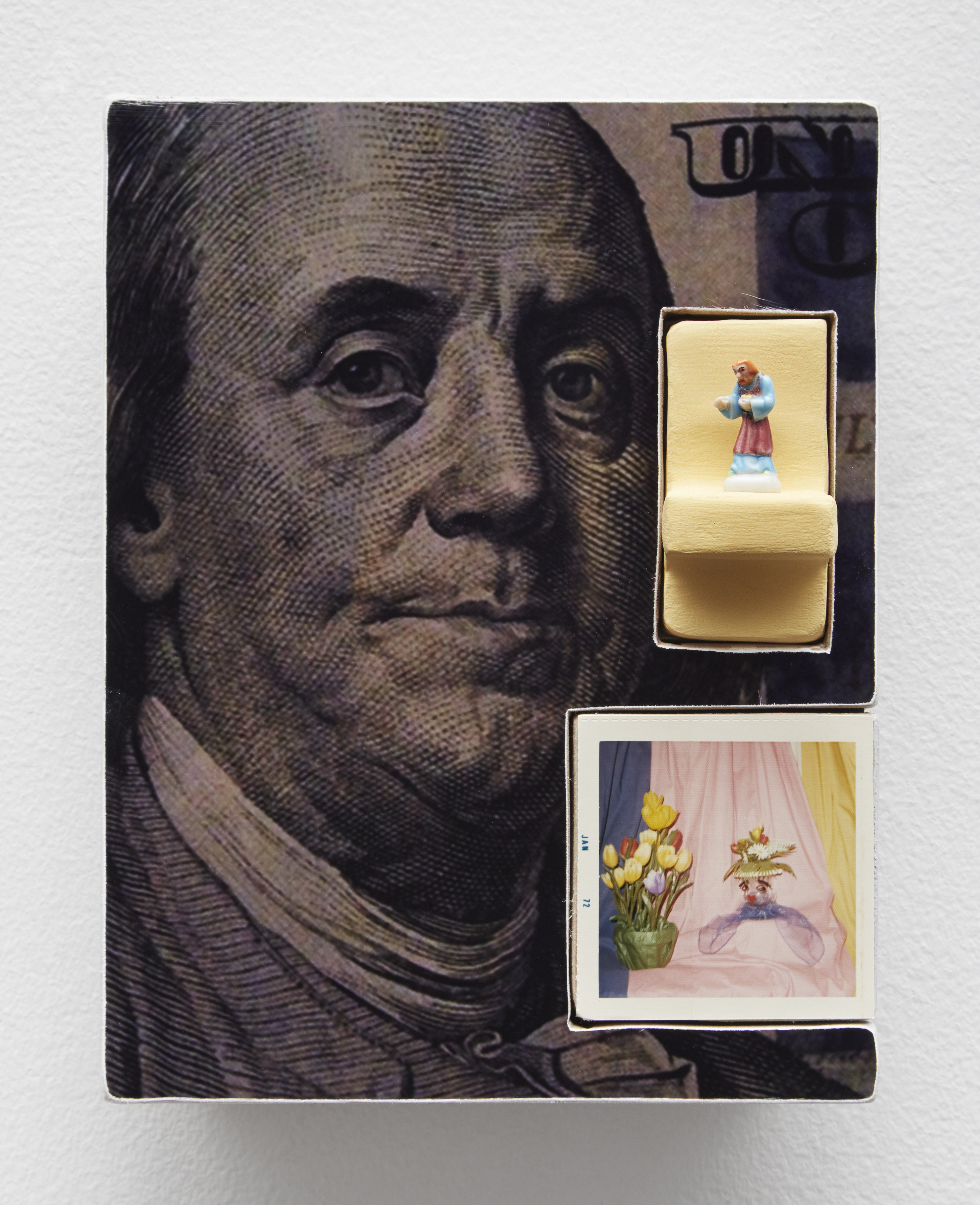 Around the time that Donald Trump and Hillary Clinton won their respective presidential nominations, Sadie Benning began work on the project that became “Shared Eye,” now on view at the Renaissance Society. At that point, back in June, the national consciousness  was already shifting as people around the country began to envision what a future with either candidate would look like. The imagery in the pieces here, made of photos, found objects and digital images, read as distinctly American, and distinctly of this strange moment.

The structure of “Shared Eye” intentionally mirrors Blinky Palermo’s 1976 installation “To the People of New York City.” Like Palermo’s work, Benning’s exhibition consists of forty panels in fifteen sequences, with a frame ratio determined by the original work. The “paintings” (so-called by the artist, although several contain sculptural elements) in each sequence consist of one, two, three or four works, hung in a rhythmic pattern based on scale and proximity. The viewer is meant to enter the gallery clockwise, starting with the smallest works, which include visual components that set the scene in the daytime. The works are meant to progress in a sort of timeline, taking the viewer to night, and then back to day again with the final images.

“I was very much feeling haunted by imagery, and haunted by what is happening and…has been happening in the world,” Benning said during an artist talk with the exhibition’s curator, Solveig Øvstebø, at the show’s opening. The Brooklyn-based artist said that working within the outlines of Palermo’s piece, which wasn’t exhibited until after his death, felt like a relationship that made sense.

The relationship certainly works. Although the content of the installations illustrate where the two artists diverge, an argument could be made that both were trying to grapple with a difficult time in their nation’s history. Palermo’s acrylic-on-aluminum paintings were made in red, yellow and black (the flag colors of his native Germany). He was born in Leipzig in 1943, and had recently returned to the country, after a stint in New York, when he died suddenly at the age of 33.

In contrast, Benning’s paintings are full of color, and while they may reference the United States, they do so in a myriad of ways. A biblical image of Gethsemane is inlaid in panel sixteen, above a black-and-white found photograph of a 1950s-era sitting room. Both are smaller elements in the panel, which is overall made of a digital photograph of a wall graffitied with the cartoonish face of the devil. In panel thirty, a photograph shows a Vietnam-era U.S. soldier reading a newspaper with the headline, “S. Viets Propose Total Ceasefire.” Above him, an illustration shows a landscape with felled trees. Both are cut into a blown-out bright orange digital photo, with what looks like a streetlight shining through a window shade. 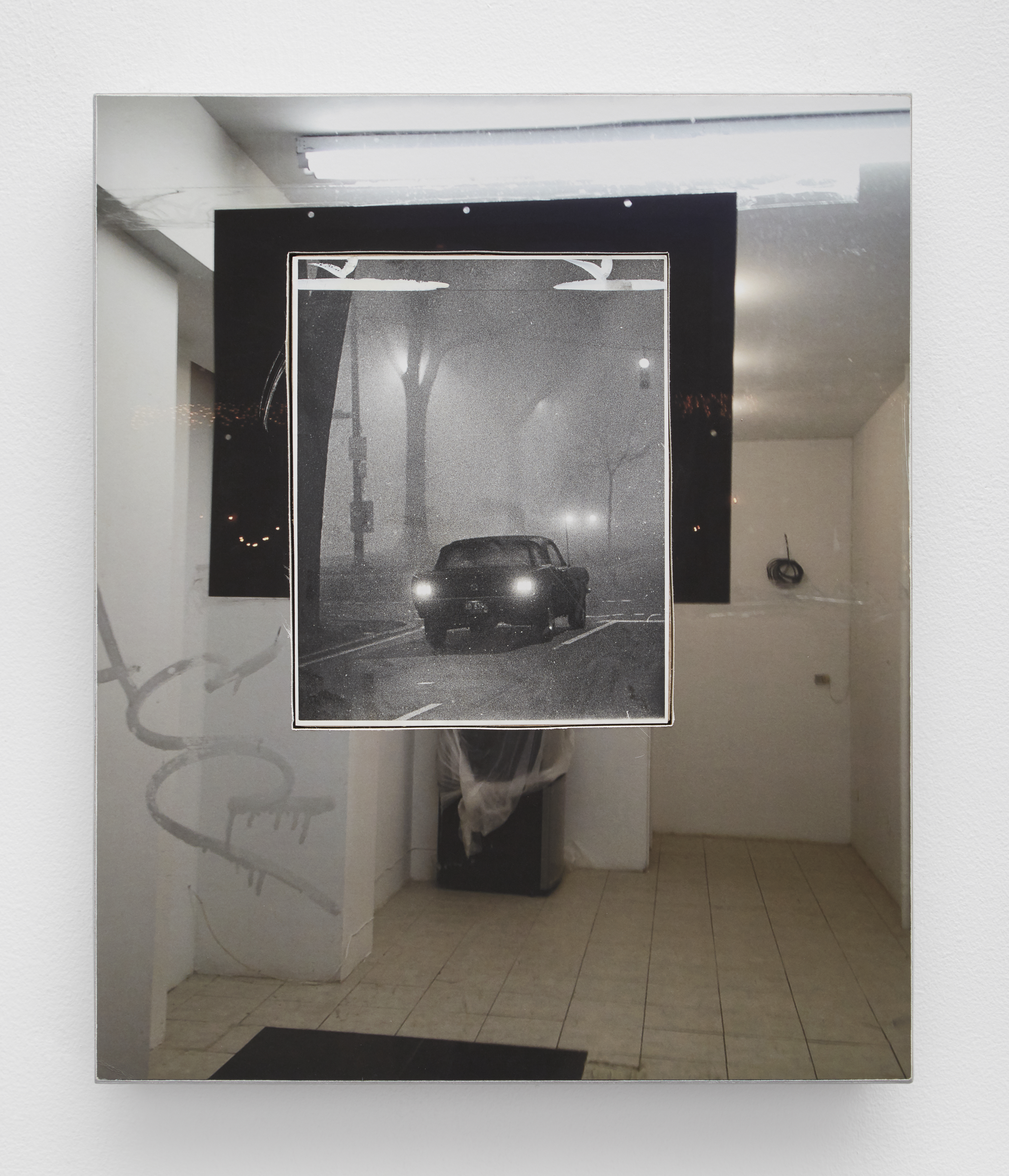 Some of the references are terrifying in their contemporary relevance. In panel twenty-six, a photograph shows a marching group of Ku Klux Klan members. Above it is an image of a pair of suitcases. The background is a beautiful yet hard-to-decipher photograph. Two women appear to be sitting on a deck with their hands folded across their laps. In the middle of the painting, where the other two are inlaid, the photo has been damaged. The white spot almost looks like a reflective glare.

During the artist talk, an audience member thanked Benning for instilling some hope at a time when it is urgently needed. Benning responded that there is certainly hope in the work, but that it exists alongside pessimism. “I think there’s hopefulness, or a desire for interconnectivity that is more about what we have to share with each other and give to each other, a kind of generosity of seeing each other as human, and not treating each other otherwise,” Benning said. “But I was working with this fear of what is possible in this country as well… I kind of split myself between those.”

In a 1993 interview in Bomb magazine, Benning and Linda Yablonsky spoke about the artist’s early work, making videos in their bedroom with a toy Fisher-Price Pixelvision camera. The videos landed Benning, then nineteen, an invite to participate in that year’s Whitney Biennial; they were the youngest artist ever invited. When asked why the videos were all shot in the artist’s bedroom, Benning replied, “I guess it’s because the world’s not safe, my bedroom is. It’s my space and all my things are mine, and there’s no one there, passing judgment.” Almost twenty-five years later, the world still doesn’t seem very safe for a queer teenager, or for any number of people targeted by our president- and vice-president-elect. But if “Shared Eye” is any indication, that fear can be a driver of change or a refusal to be silenced even in the face of an unknown future.