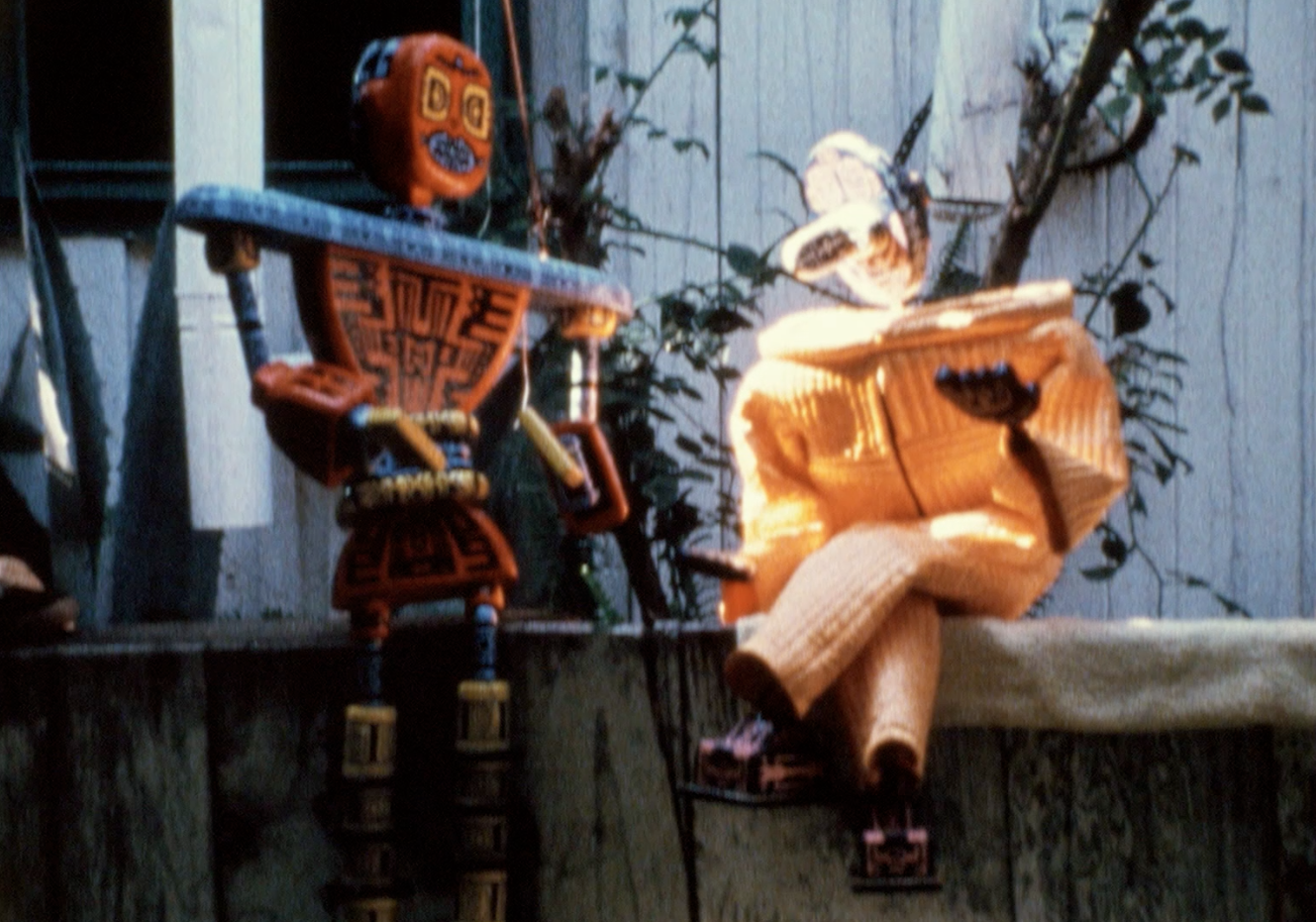 Suzanne Simpson’s newly restored short, “Karl Wirsum” (1973), opens with the ascending chords of a ragtime tune. The camera slowly zooms out from the front wheel of a tricycle to reveal an unexpected rider: a puppet in an orange plushy suit with a flat, circular and colorfully painted head. The puppet begins to peddle stiffly around a grassy yard into a patch of bleaching California sunlight. His head cheerfully bobs along with the tune. Only the shoes of the artist-puppeteer, Karl Wirsum, are visible on the ledge of the fence behind the dancing marionette. When the song ends, the picture fades to Wirsum cycling up the sidewalk and maneuvering his way through the gate to his studio.

This uncanny sequence highlights similarities between Wirsum and his puppet. Not only do the two cycle slowly as they negotiate their routes, but they also share an unexpected physical resemblance. Wirsum’s sunglasses have a pouch on the nose bridge that sticks out, mimicking the puppet’s protruding nose. Simpson underscores a comedic humanness in Wirsum’s work by highlighting these details in this unique glimpse of the puppets in action.

This little-known cinematic gem also provides a rare opportunity to see into the Chicago Imagist’s West Coast oasis. Wirsum moved to Sacramento, California, for three years in the early 1970s to get away from the attention that the Hairy Who members were experiencing in Chicago. Simpson captures Wirsum’s collection of old toys, various details of the works he was making, and the artist drawing, painting and speaking about his work and its influences as he sits on the floor. 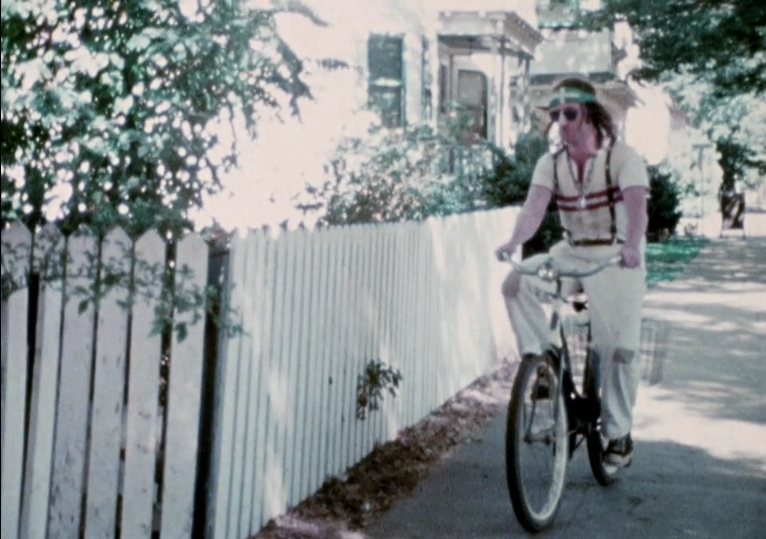 The occasional jerks and jitters of the camera in Simpson’s first film accentuate the humor of the puppets’ awkward yet endearing gestures. Instead of writing a thesis paper during her graduate studies in art history at California State University, Sacramento, she chose to make a short video because she thought it would reach more people. Upon the recommendation of her professor, and with basically no filming experience, she set out to meet and film Wirsum in his studio for a few days.

Although this thirteen-minute film was screened at several large institutions in the early 1970s, it spent most of its existence in a film canister, until recently when the team at Pentimenti Productions found it while researching for their documentary, “Hairy Who & The Chicago Imagists.” They committed to restoring the work, producing fresh scans, color corrected to match the saturation levels of the original stock, Kodak 7242. Additionally, to avoid rights issues, they also commissioned a new score by Marc Riordan and Alex Inglizian that closely resembles the original.

The score plays a significant role in setting the playful tone of the film. Simpson chose a ragtime tune in the style of Scott Joplin to accompany the vibrant marionettes at the beginning and end of the film. The middle section, though, takes viewers around Wirsum’s studio through a series of repetitive quick cuts that animate the flat, painted figures hung on the walls. Simpson’s edits create movements similar to a flipbook. Set to percussive rhythms, this part of the score exaggerates the “primitive” influence on Wirsum’s work and disadvantageously simplifies it. Viewers lose sight of his desire to fill space and his obsessive nature with this dramatic interpretation.

However, in the closing moments of the film, viewers return to the yard and meet a majestic Cleopatra-like puppet hiding in the shadows of trees and a piano player clunking away on the keys. Simpson leaves viewers in Wirsum’s private garden filled with imagination and eccentricity.