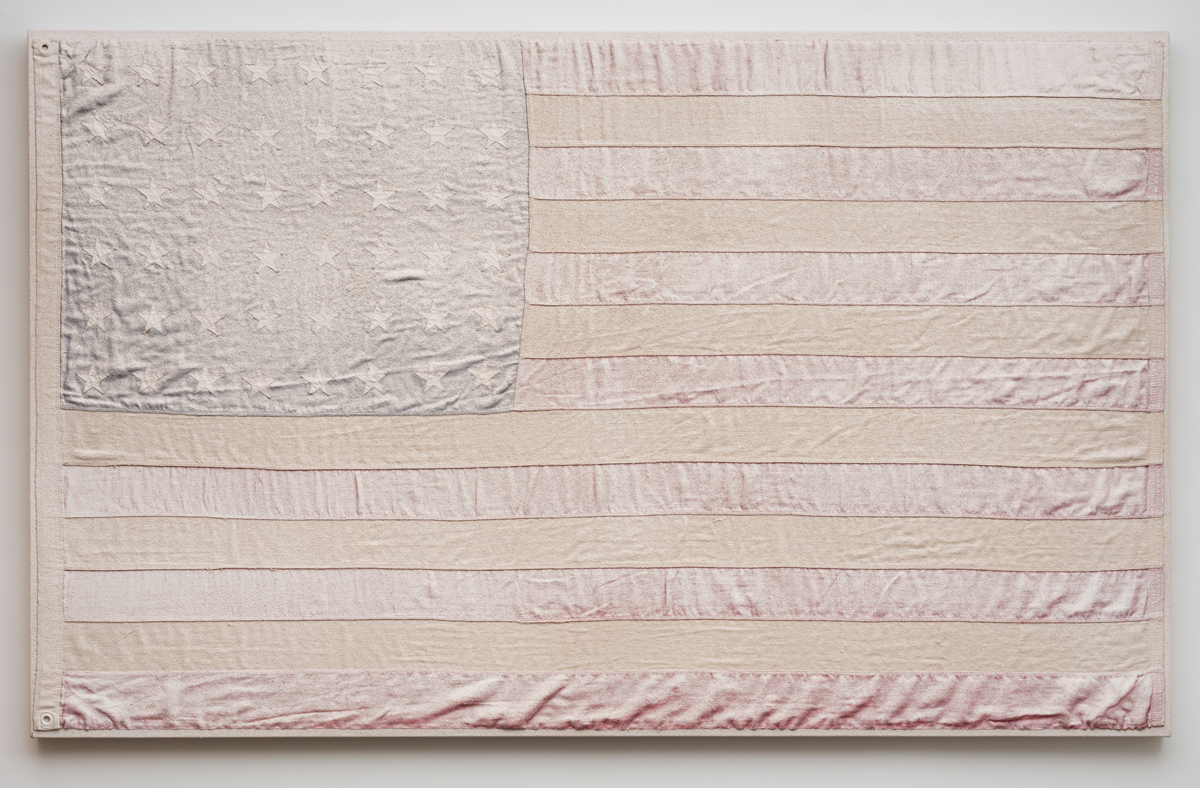 As this dismal year croaks, my usual histrionics fail me. No doomsday warning for what comes next can trump what has already taken place. The worst is not yet to come—No, it already came, and if we do not recognize it for what it is and refute it outright, we are doomed to acquiesce to its banal, gilded evil. Revolution does not wait and see where things will go; it sees them for what they already are.

At the end of last year, I wrote in this forum that I was dreading what comes next. At the time, militarized police were suppressing nationwide dissent against systemic brutality to people of color; a radicalized couple armed with AR-15s had just murdered fourteen people in a mass shooting in San Bernardino, California; and neo-Nazis were marching in South Carolina. In retrospect, the outcome of the presidential election seems predictable, logical even. And yet, Trump’s victory was an upset for the Republican Party, which can hardly believe its surge to power after its establishment spent months distancing themselves from the accidental Id mouthpiece of their conservative ideology. To liberals who voted for a third Obama term with a complementary side of feminism, the dissonance was much greater: like a mirage, the America they saw on the horizon dissolved as soon as they approached it. The fact that Clinton won the popular vote will only continue to stoke the hopeless resentment of a middling liberal political class that failed at every turn to acknowledge that the people needed something different this time, something they hadn’t seen before.

Most of everything written in the lead-up to the election reads strangely in light of the Trump victory. The political climate described in the mainstream press rings as unfamiliar as a science-fiction plot—an alternate reality so plausible, and yet so hopelessly false—when looking back from beyond November 8, a date that appears like a fault line in the fever dream of American history. Perhaps this is why, more than anything made with an eye cast toward the election, the exhibition “Broken Flag” at Iceberg Projects can still be understood in the post-mortem moment. Curated by Daniel Berger and the Museum of Contemporary Art’s Omar Kholeif, the exhibition’s premise recognizes a rupture in American society that, much to their chagrin, few liberals were willing to scrutinize before the whole thing fell apart. 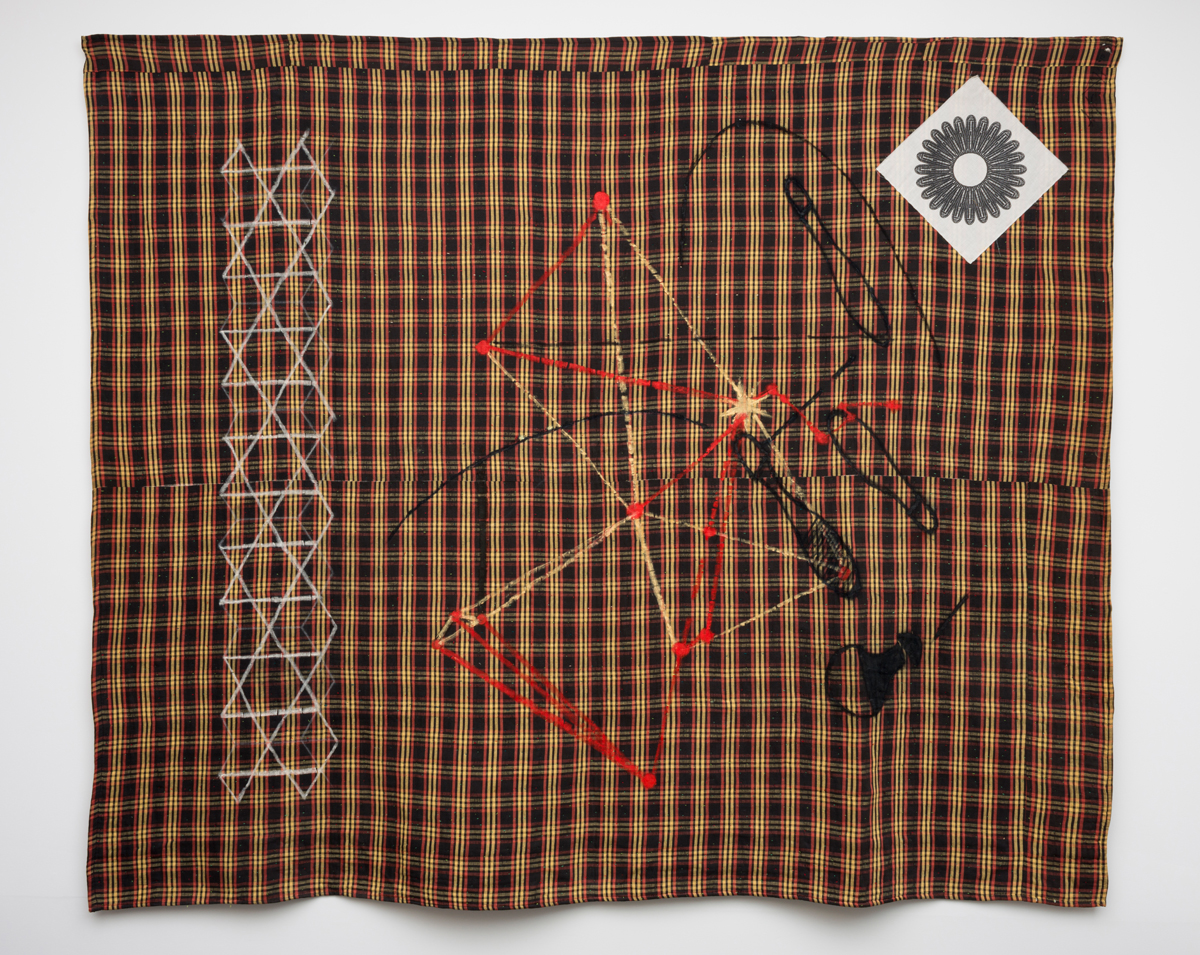 There are no signs of that easy, self-congratulatory progressivism that failed us in this modest group show, hung in the carriage-house-turned-gallery at Berger’s Rogers Park home. The focus is on the struggle before us, which looks sadly similar to the one we thought we had already won. The opening salvo sets the tone: AA Bronson’s “White Flag #2” (2015) hangs on the brick wall opposite the entrance. From a series begun after September 11, 2001, Bronson’s painting takes a thrifted American flag as its canvas, painted with a chalky preparation historically used to prime a surface before painting it. The colors of the flag emerge faintly and ambiguously from beneath this overcoat. Is the flag faded from the fatigue of representing a fractured America, or is it showing its true color in the banner year of white nationalism?

To the side, Sanford Biggers has contributed a large, patterned fabric painted with esoteric symbols. Drawing from the quilt-encoded messages used by supporters of the Underground Railroad to communicate with each other and with fugitive slaves, the foreground bears strange symbolic gestures. A Star of David repeats until it is barely recognizable, and a large swastika lurks within a design that might otherwise be instructions for waltzing. Inscrutably perplexing, the iconography seems to conflate the metaphorical railroad of the American Abolitionist movement with the World War II railroads that carried Jews to concentration camps. Tellingly, the work refuses to resolve this internal tension between the two war-transport industries, and one is left wondering about the structural analogies between them. 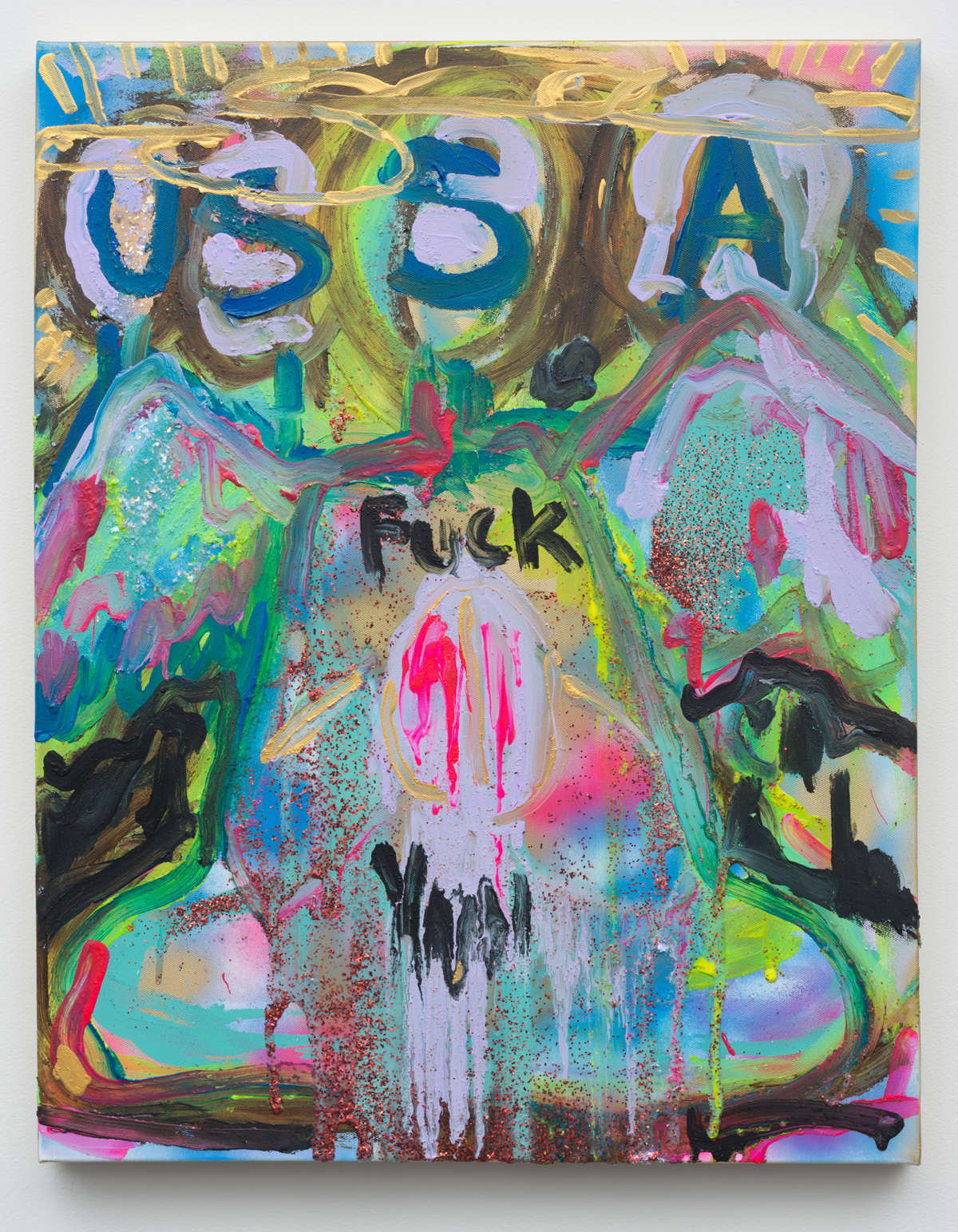 These dark sentiments appear momentarily relieved by a vibrant salon-style hanging of six works in the larger gallery. A cascading gesture begins with a crudely painted portrait of a human-like horned creature in a hideous orange suit. This effigy of Senator Jesse Helms, painted on cheap paper by an anonymous protestor, is drawn from Berger’s archive of the Art+ Positive group, which protested the slashing of the budget for the National Endowment for the Arts and a 1989 law, championed by Helms, to outlaw federal funding for artwork that was considered “obscene or indecent.” The work hangs well next to Elijah Burgher’s colorful, crypto-symbolic “Testosterone Event” (2016)—an apt title for our President-elect, among other things—and Zachary Cahill’s explosive “Avenging Angel” (2016), a masterful abstraction of beautiful, putrid rage spouting “FUCK YOU” from its tender, pink orifice. Helms and the Angel are an electric pair, anchoring the polarized ends of a political spectrum of deformed, self-righteous rage. Above the Angel, a rainbowed, sparkling American flag by Jonathan Horowitz reminds us of a victory once so proud, now in dire jeopardy. The recent triumph of nationwide gay marriage seems, like this flag, glittering and shallow in light of the imminent erosion of rights for marginalized people of every stripe. Despite itself, Horowitz’s work reminds us that a victory of liberation should always be accompanied by deep introspection and an exhaustive inventory of the freedoms not yet secured for all. 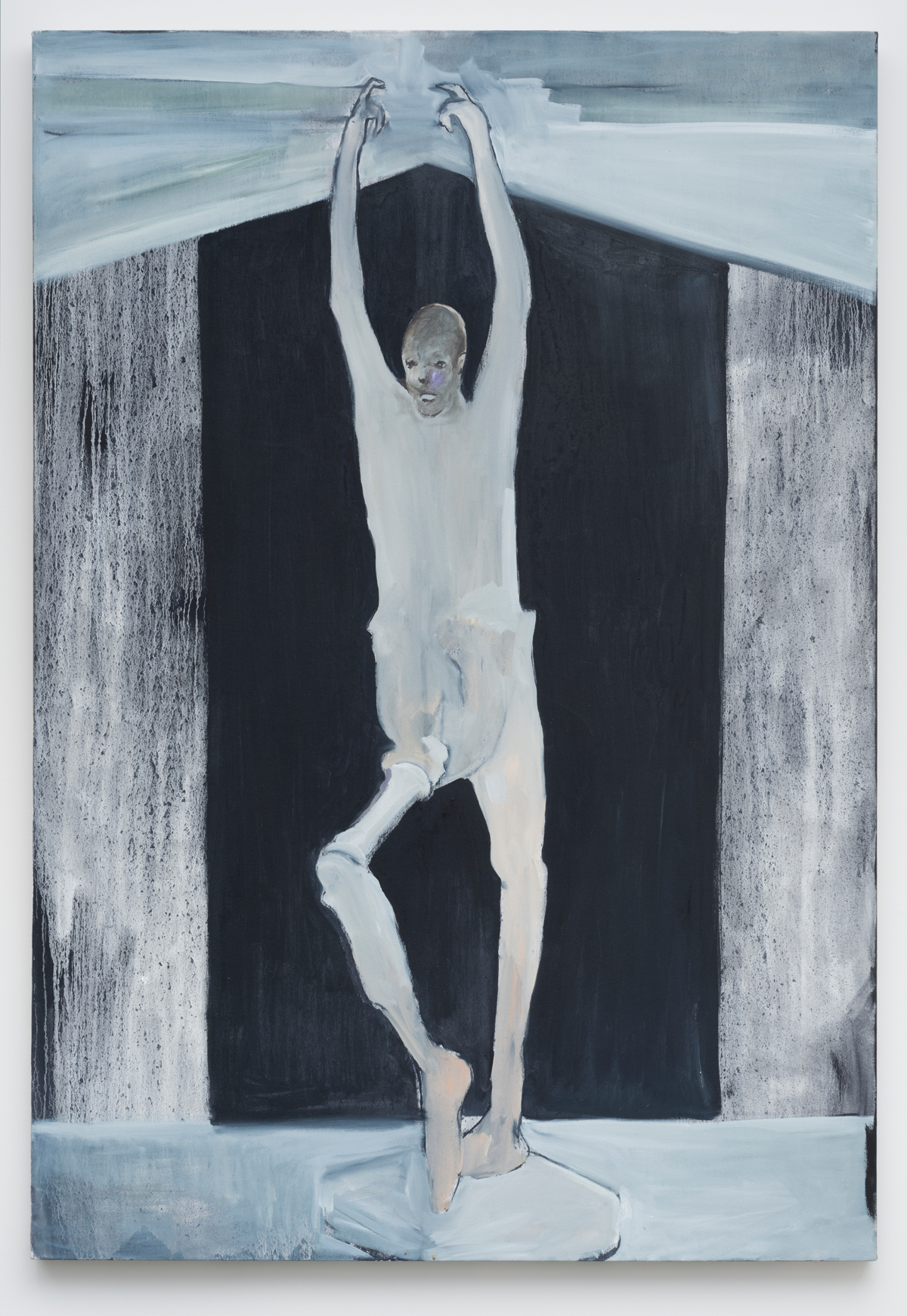 On the final wall, a bleak, greyscale painting by the late Noah Davis depicts an emaciated figure pirouetting on a pedestal, arms aloft and hands clawing at the sky above. The figure contorts itself to meet a torturous command—is it a lynching, or a ballet? The body is pale, but it is unmistakably black in its lugubrious performance of pain. Adjacent to it, a print by Kerry James Marshall depicts a young black man, crowned in a thick afro, looking askance with a tear welling beneath his eye. A speech bubble from off-frame reads “Everything Will Be Alright…I Just Know It Will!” Before the election, those words were the chorus of apathetic liberals, self-satisfied with their achievement of delivering the first female president. Today, it is the chant of the regressive right, bent on remaking a country that never was.

I’ve often questioned what it means to make art in times of struggle. There is something about it that seems so helpless, so misguided a use of the little time and energy we have outside of our dismal working lives. But then a political debacle happens and I am reminded that the culture war—the struggle over images and what they symbolize to us and for us—has forever been at the core of political consciousness. Politics move through images, they represent the world we live in and imagine the one we aspire to make. In that sense, we are always in the midst of a culture war, and it behooves us to pick up our weapons—the brush, the camera, the palette knife—and make the images that we require. AA Bronson’s white flag isn’t a surrender. It is a gessoed canvas; it is an invitation to paint a new image of the nation, something that we haven’t seen before.

“Broken Flag” will culminate on December 16 with “Séance, V. 13: We Call Forth America, the living,” a performance by Zachary Cahill at Iceberg Projects, 7714 North Sheridan.