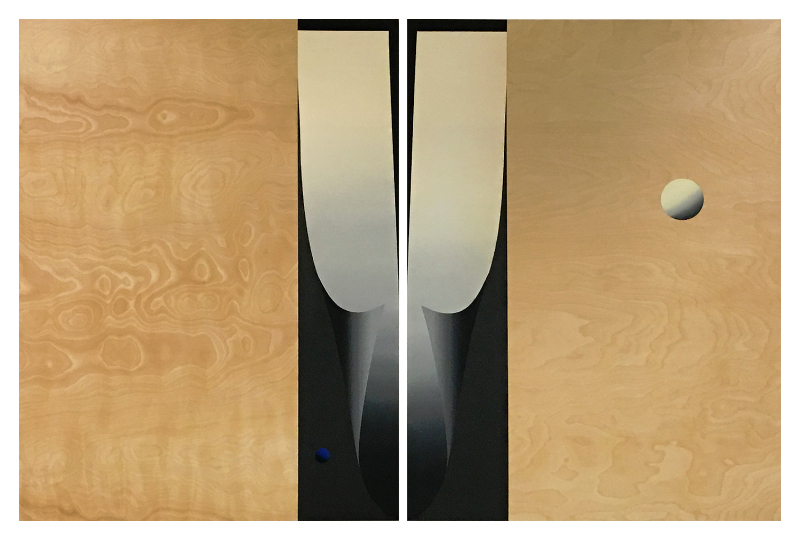 More than a dozen large-scale works by Dan Ramirez bring sorely needed color to this Chicago winter. Increasingly recognized as an American master as well as a hometown treasure, Ramirez was long an influential teacher at the University of Illinois at Chicago and at the University of Wisconsin-Madison. These new pieces were not seen in his 2016 retrospective at the National Museum of Mexican Art.

Ramirez’s art builds on stark contrasts—color against monotone, geometric versus rounded forms, metallic surfaces adjacent to wood—combined in fugal counterpoint. Recalling the paintings of Barnett Newman, one of his inspirations, Ramirez’s elegant forms are decidedly vertical. They are not just pretty, however; the pictorial strategies in his pictures challenge the conventions of illusionism altogether. For instance, he paints the corners of flat planes folded over like a dog-eared page to reveal a surface of a different color on the illusionary verso. His flawless gradation of tones conjures pictorial distance and the suggestion of skies and horizons. In several pictures a floating sphere lends volume and compositional balance. All these formal considerations act in the service of larger ideas—about perception, purpose and artistic meaning itself. As Josef Albers once said, “Abstraction is real, probably more real than nature.” 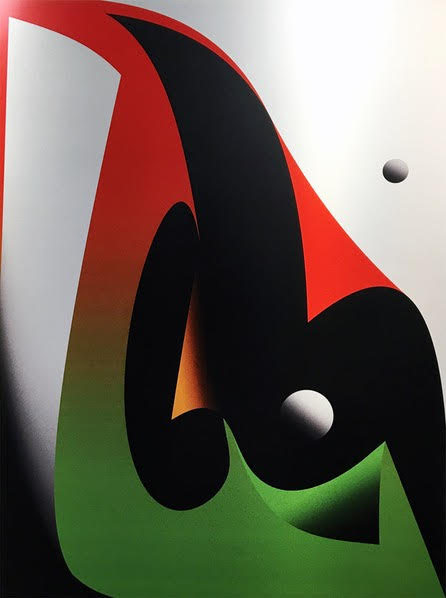 Ramirez is also a wizard with materials, his works revealing the precision of a skilled carpenter and graphic artist. His use of micaceous iron oxide in some paintings makes them shimmer, and a large-scale digital print is heat infused on aluminum. In the ravishing “Aletheia II-W,” he pairs two panels of contrasting birchwood grain. The striking “Aletheia: Kosmik Kathedral,” a painting on shaped aluminum, reveals the artist’s deep inspiration from architecture. Altogether, Ramirez is that rare type creative—a master craftsman and a heady conceptualist.

Aletheia is the ancient Greek personification of truth and sincerity. Speaking in a challenging abstract vocabulary, Ramirez has succeeded in saying something profoundly genuine, even relevant. His artworks may not be as explicit as a protest poster, but the care and humanity he imbues them with is most welcome in this present of careless inhumanity. (Mark Pohlad)