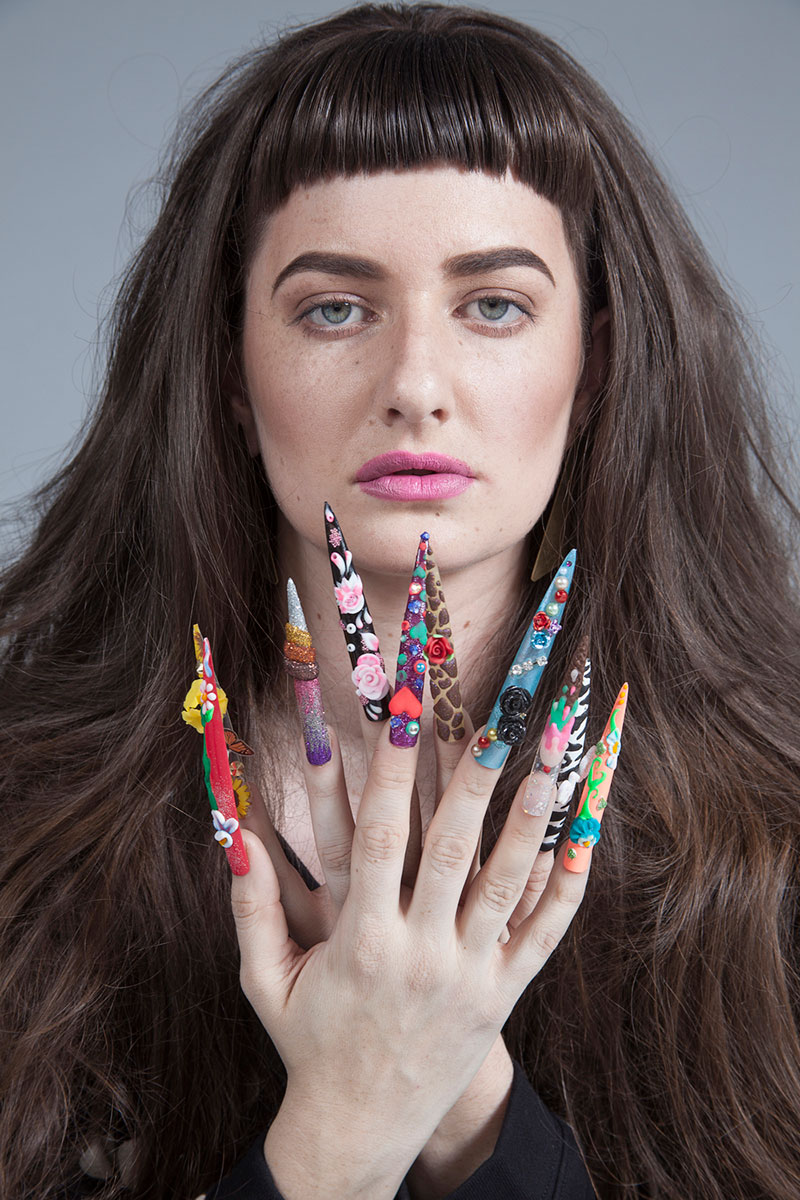 “Before 2006, I had only been in nail salons a handful of times, for prom and maybe for my high-school graduation,” says Helen Maurene Cooper when asked about the story behind her upcoming artist book, “Paint & Polish.” “I had never worn acrylic nails, nor had I wanted to. I wore big combat boots with dragons painted up the sides and fishnets and black nail polish. My nails were short,” she says, adding, “I never went to nail shops because I didn’t see anything I desired or admired coming out of them.”

When the East Coast native moved to Illinois for her MFA degree at the School of the Art Institute of Chicago, she started experimenting with photography. “I produced elaborate staged photographs in which I was the protagonist, playing glamorized Southern feminine characters based on the women of Dynasty, Dallas and American country music of the 1970s,” she says. “As part of method acting for the characters I was playing, I spent five months wearing long, acrylic almond-shaped nails in monochrome colors. I tried to be as authentic as possible.” Eight years later, she found herself deep within a site-specific exploration of beauty in Chicago’s West Side, where “Chicago-style” nail art flourishes. Working within this beauty-centered community, her photography focused on specialty minority-owned nail businesses and took up subjects of feminism, entrepreneurship, the power of adornment and intimacy. Then came “Paint & Polish,” a project combining essays and oral histories in the form of conversations with nail salon owners and artists, with documentary-style portraits taken by Cooper and writing by Ryan Kenneth Blocker, Roula Seikaly and Patricia Reed. 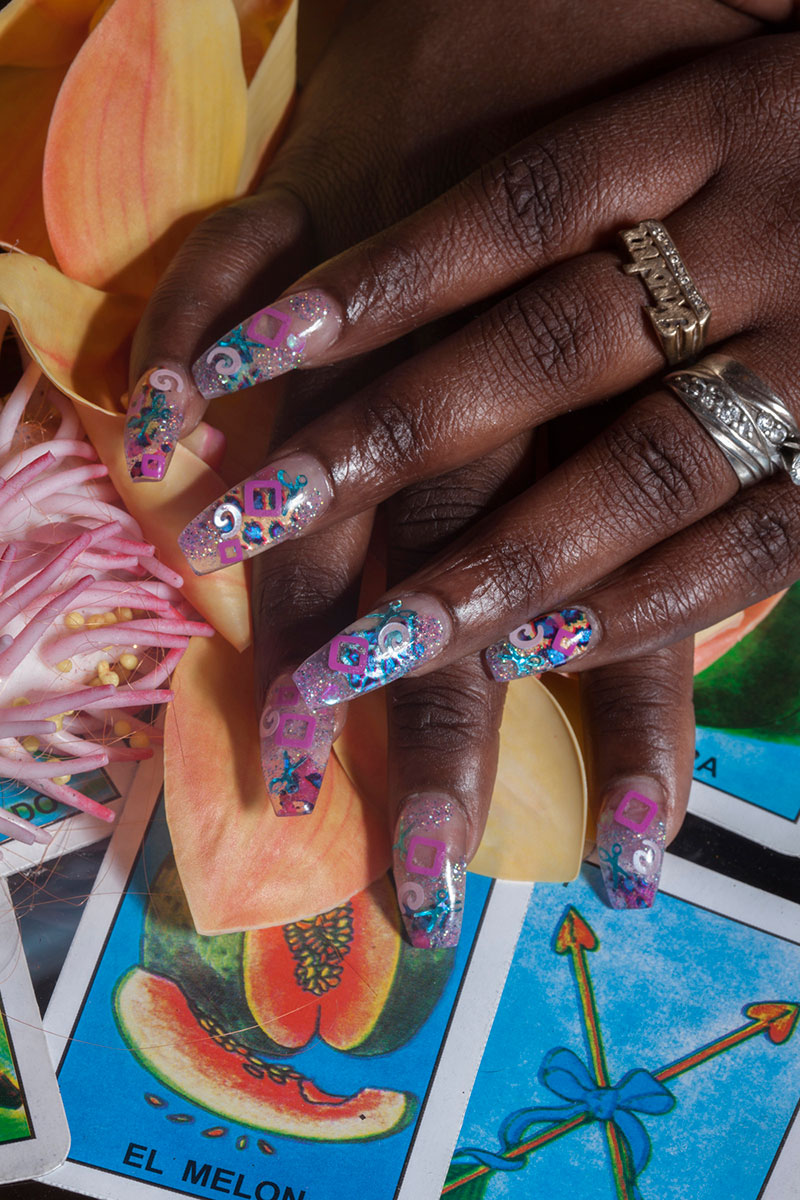 “By 2007, I had taken my first teaching jobs, which required traversing the West and South Sides on the CTA,” she reminisces. “During this commute, I scoped out other women’s nails. I saw long acrylic nails where the design would vary from finger to finger, but the color palette would remain the same. The detail on each nail was precise, crisp, clean; flawless. I couldn’t help but ask where they got them done, and for months I got no answer.” It was winter of 2008, when a woman told her about a shop “somewhere on Chicago Avenue near Austin Street.”

“I found myself on the far West Side of Chicago, in a neighborhood I would never have visited otherwise.” she says. “I saw a shop with a fluorescent sign that identified it as ‘The Bottom’ and I entered.” Inside this vibrant community of “mothers and daughters, connected by both birth and mentorship, who have found long-term financial stability through craftsmanship and entrepreneurship,” as she describes it, Cooper knew she wanted to take photographs of this unique salon and tell the stories of the women who worked there—stories that define them individually and as a community and are just as unique as the custom nail designs they make. Most of the artists were African-American or Latinas working in this tiny slice of a multi-billion-dollar industry where nail artists travel the world for celebrity appointments and have gained prominence as internet tastemakers accumulating thousands of followers and spreading the latest trends on social media. 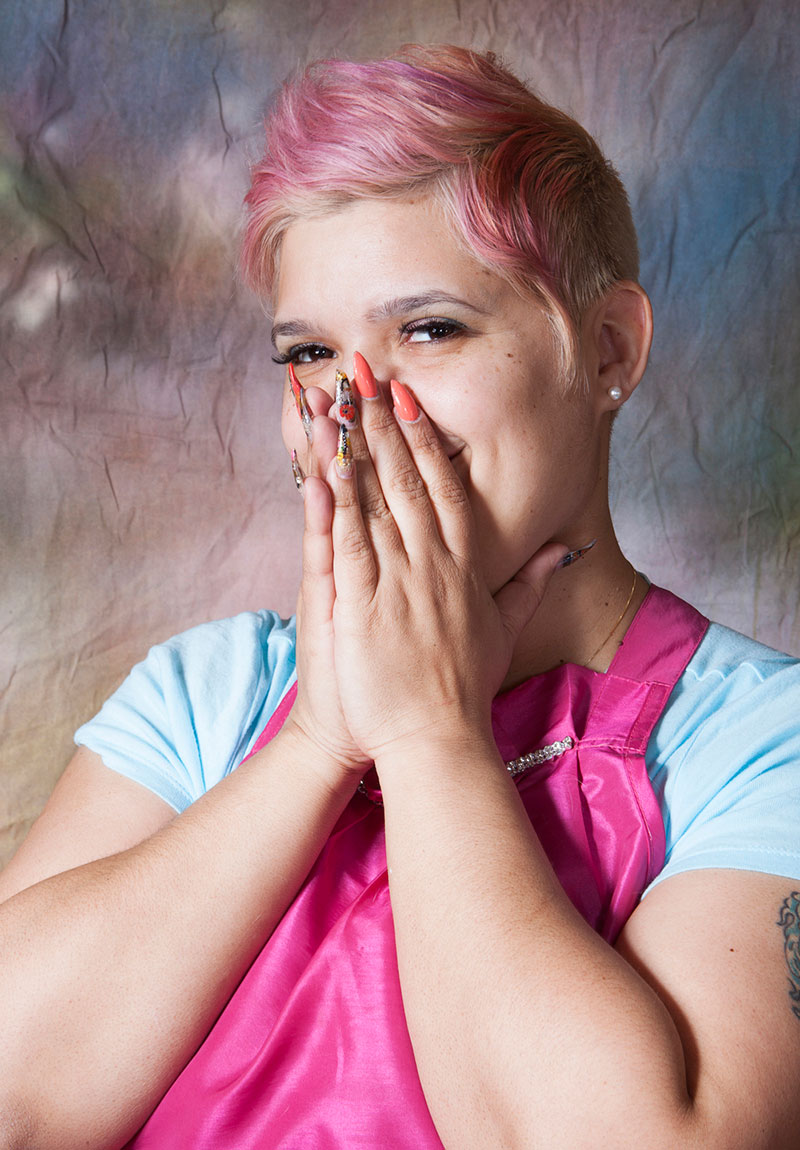 Jackie Blue of “The Bottom” is one of the first African-American women to own a nail salon in Chicago and, as such, is a living legend. She has been invited to do her clients’ nails even after they’ve passed away, an unusual aspect of certain funeral arrangements. “She cultivated so many entrepreneurs and twenty years later she’s still thriving —she is the grandmother of it all” says Glynnus Alexander, nail artist, salon owner and instructor at Polished Nail Boutique & Academy. Loretta Gonzalez of “Beautiful Nails” and “Jazzy Nails” trained both of her daughters, Alexis, now of “Naughty Nailz,” and Regina, and has mentored countless other women in a shop that knows no race. “I would have anybody work in the shop that wanted to be there, whether they’d be Hispanic, white, black. It didn’t make any difference to me” she says explaining the importance of diversity at a time when still some Chicago neighborhoods remain heavily segregated. Yara Fernandez Ruiz of “Nailicious” began working as a nail artist as a teenager in Puerto Rico. After moving to Chicago at age eighteen, she got a job at a Burger King. It was there that Loretta Gonzalez noticed her nails. Within days she offered her a job. Now she is known for her flower motifs in paint and sculpted acrylic, and has her own celebrity clients.

An homage to lady hustlers everywhere, as Cooper calls them, “Paint & Polish” not only shares individual stories but dives into the Chicago nail world from socioeconomic and cultural perspectives. Cooper’s photographic series and the accompanying writing explores the aesthetics of a local cultural economy where “nail shapes—stilettos that end in a razor-sharp tip or blunted square edges, be they prismatic drags or stripes, squares, or inlays—these custom nails express the biographies of the sitters, the talent of the artists and the empowerment that springs from self-expression.”

Helen Maurene Cooper’s “Paint & Polish: Cultural Economy and Visual Culture from the West Side” will be available to order in late February at onomatopee.net.