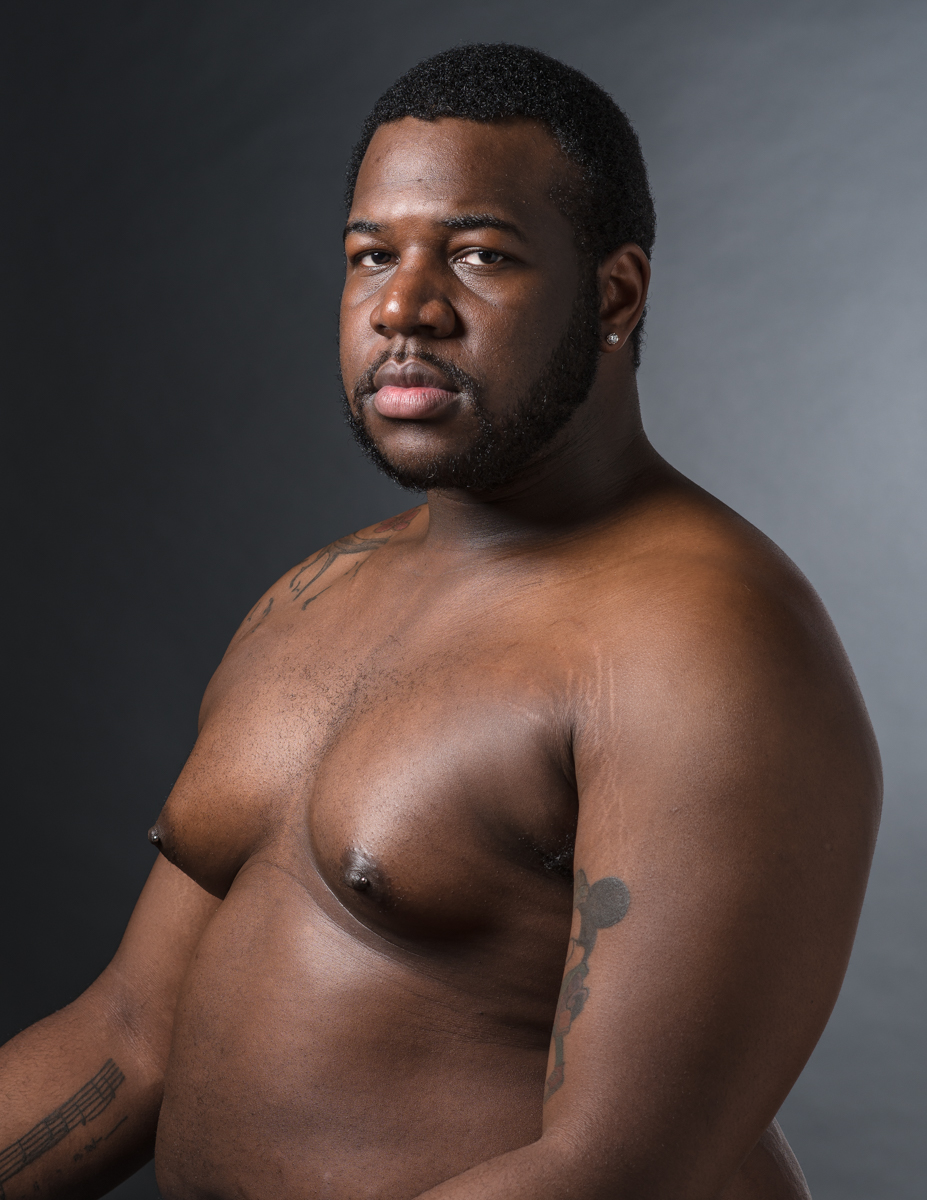 “Modern David” is now on display at the Chicago Cultural Center. This installation of thirty photographs of guys named David, arranged in a large square, is the work of Chicago artist Mariah Karson, and it’s part of a larger show titled “The Subject is Chicago: People, Places, Possibilities.”

Karson’s other major current work is “American Legion,” which she explains “documents the lives of Legion members and the impact veterans and Posts have on communities. It combines my love of small-town America and my unique sense of patriotism.”

Patriotism and one’s place in the country are also themes addressed in “Modern David.” Here’s the invitation to participate in “Modern David” that Karson put up on Facebook:

Seeking individuals named David in the Chicago area to be photographed for a portrait series. Please contact Mariah Karson to participate and receive an 8×10” print of your portrait. Please share / tag Davids you know to get the word out. Email mariahkarson@gmail.com or call 773.470.8571 to participate.

Karson’s “Modern David” project has been going on for over two years. In early 2015, I heard about it from a friend. Sounded fun. Karson and I communicated via email, and she told me that I’d be photographed with my shirt off. I was okay with that.

Men now allowed to hate their bodies equally
Once in Karson’s apartment, however, taking off even some of my clothes was a little more awkward than I’d expected. Married for decades, I hadn’t disrobed in a woman’s apartment in a long time, and it felt slightly… off. It turned out fine, of course, but at first it wasn’t entirely comfortable. Turns out, just by showing up I’d gone further than most who were invited to be a part of the “Modern David” project. According to Karson, “It takes a certain kind of David to allow themselves to be displayed in a vulnerable way, without control of final viewing. Only about five to ten percent of Davids that are approached or invited to participate actually come in for a portrait session. One powerful statement another male photographer made to me when discussing the difficulty of finding participants was that with more equality between genders, now men are allowed to hate their bodies equally. I have learned a lot about male body image issues—some participants have detailed how they prepared for their session, workouts, spray tans, diet… one participant came in and did push-ups in front of me.”

David Sanchez, featured in “Modern David,” owns a Chicago modeling agency. Sanchez, who has done some modeling himself, told us he’d recently had a large tumor removed from his neck; the surgical scar is still apparent. “My business is all about body image,” says Sanchez. “During the shoot, I don’t think I’d ever felt more vulnerable. I had not only a physical but an emotional recovery to deal with. I felt very raw. Being in the modeling business, you have very clear ideas about body standards, and in the photo, I didn’t have that certain look. But just being on camera helped my emotional recovery. And seeing the exhibition, I felt empowered just seeing all those different shapes.”

Other Davids came more prepared. David Stephens told us he got in shape for the shoot “by watching my water intake and spending some time at the gym.”  Wish I had done that. 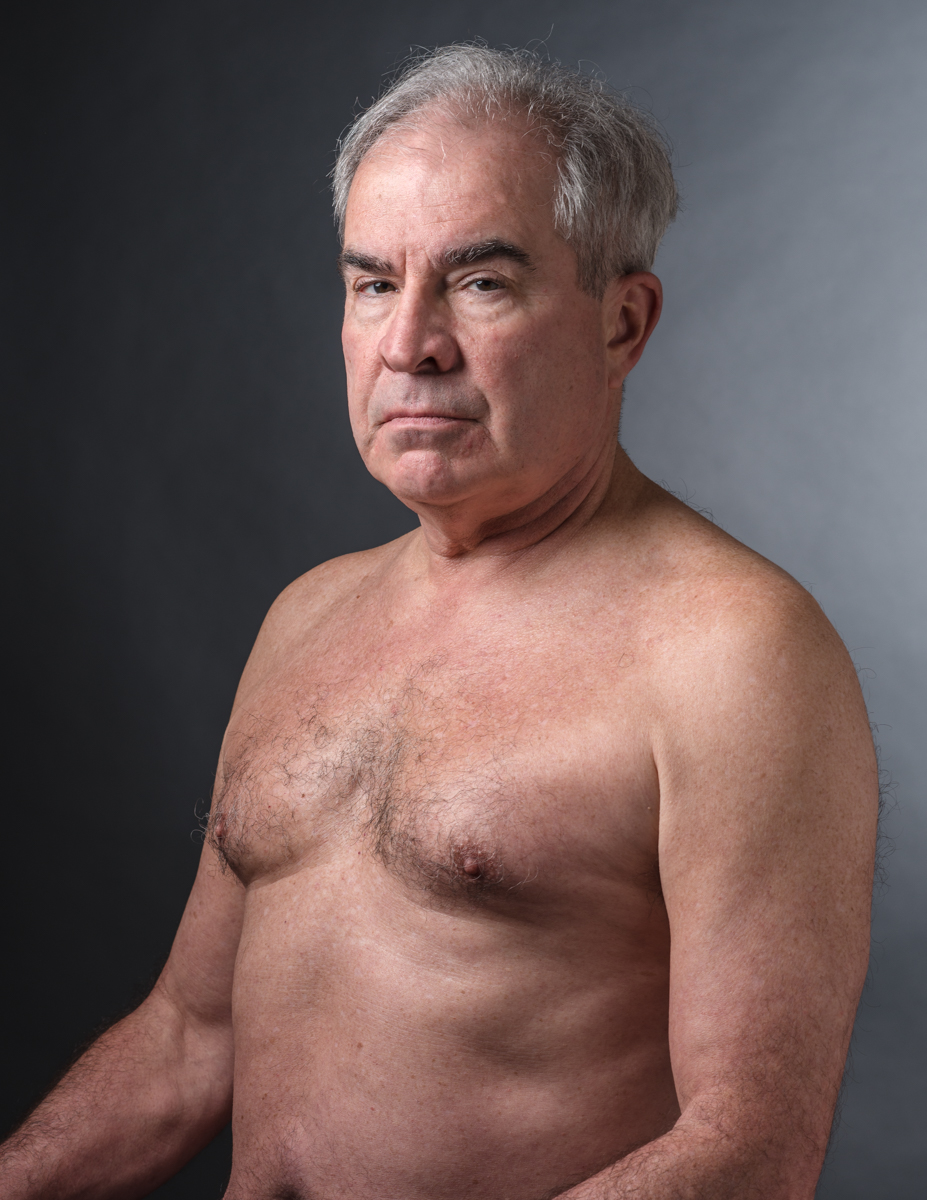 The author as depicted in Mariah Karson’s “Modern David” series

Michelangelo’s David: colossal, naked, perfect
Right now, you probably have a mental image of David, and that iconic, paradigmatic David was implanted in our collective consciousness by Michelangelo, who sculpted “the” David for the city of Florence. This gargantuan statue of the young warrior, facing down a distant and unseen Philistine Goliath, has been interpreted as a symbol of Florentine civic pride and resistance to threatening neighbors. Michelangelo’s warrior boy was also on Karson’s mind, of course, and believes that, “using the name David provided for both religious and art historical context. Michelangelo’s sculpture at first impression is a colossal naked body, perfect in anatomical form and carved with a proud glance. The physical representation of David in this sculpture has been looked at as the ideal or perfect man, much like modern representations of men in advertising and media.”

Michelangelo’s David has always struck me as grotesque, monstrous, domineering, smooth and sleek, almost a precursor of twentieth-century Soviet Socialist realism. Even though this paradigmatic David was technically well-proportioned, it’s all white hardness, threatening with barely suppressed aggression, much like America, right now, in 2017. You feel small in the presence of Michelangelo’s giant, this great man. You’re supposed to feel small. Is this a commentary on life in modern day America? Perhaps. Karson told us how she came up with the name for this exhibit: “My creative process often begins with a working title that is exemplified by images—I love puns and bad ‘dad jokes,’ so when you say the words ‘modern DAY-vid’ it sounds somewhat like ‘modern day.'”

Karson began this project at least two years ago, when no one could have foreseen where America would be today, but as Ezra Pound once famously said, “The artist is the antenna of the race.”

I asked Karson about the aesthetic organizing principle of the work, “The images as a grouping form a monumental wall of taxonomy in a paper doll or quilt-type of aesthetic. At first, viewers may notice a David’s flaws or pose in relation to the images around them before stepping back and feeling that the images are gazing and judging them in return. The exact placement is decided by arranging Davids to work in the configuration and create an overall composition: Because of varied heights, heads can appear larger or smaller, the skin tones are also placed to exhibit a variance (not all bald guys in a group, vary from light to dark, thick to thin, etc.) and tangential placement is considered.”

The Davids in Karson’s exhibit, taken collectively, are indeed monumental, but a monument made of individuals, not pivoting on the power of a single individual, stronger together (yeah, you heard me), highlighting variety and diversity within the uniformity of a shared birth name. There’s a tension between the bigness of the work and the smallness of each individual photograph. With Michelangelo, it’s all (with one critical exception, smirk) about bigness. The famous statue itself is, of course, a huge monument to ego, Michelangelo’s and Florence. This was not the way it was during shoots for “Modern David,” as David Fink, co-founder/owner of Acorn Theater in Three Oaks, Michigan, explains: “I had to let go of my ego as much as possible and trust her. Posing for a photo doesn’t have be about vanity. It was about her vision and project and not about me. There is value in putting ego aside.”

In a sense, Karson’s “Modern David” is a critique of Michelangelo’s David, expressing the collective power of individuals rather than the individual authority of one great man. 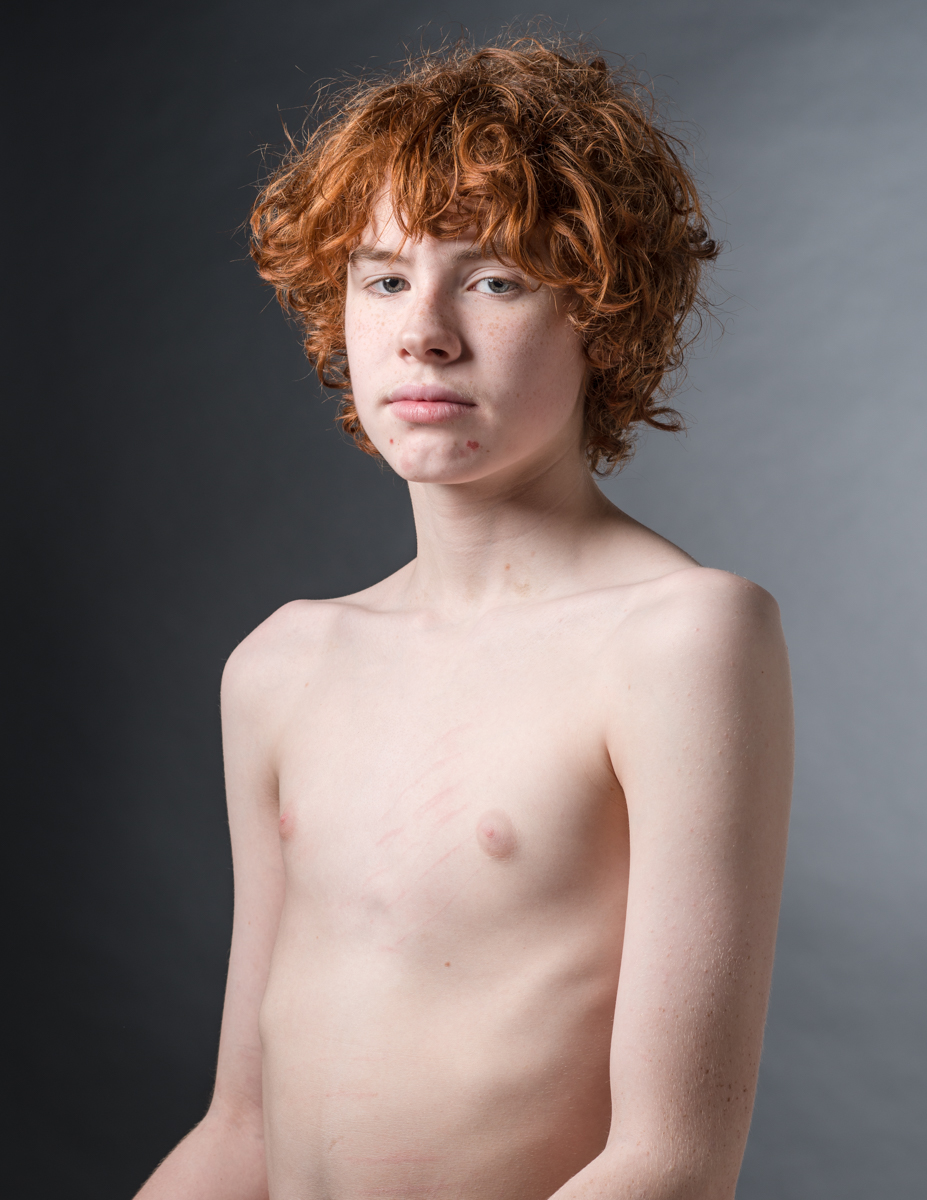 Unattainable perfection carries over centuries
We the subjects of the “Modern David” exhibit are not a uniformly handsome bunch. There are sags here and there, undeveloped muscle, some droops and drops of flesh, saggy tits—just a bunch of guys, most of us probably thirty and above, some of us much older, and there are handsome ones here and there, but mostly we’re just everyday people, which was Karson’s intent, “The unattainable perfection of form carries over after centuries, and today is molded by retouching instead of a chisel.” As a project, ‘Modern David’ exemplifies a static reality of truth; the images are not retouched. Because they are presented in a larger-than-life size, viewers can examine every hair and pore on each subject, details that are often omitted from an image prior to public consumption.”

Viewing pictures from the “Modern David” exhibition with a friend, Norwegian tapestry artist Berit Engen, Engen’s first reaction was, “Oh my god. They are so exposed and vulnerable.” I asked Karson how she felt about this other artist’s gut response. “The vulnerability of photographing someone is evident clothed or unclothed; a subject is allowing a photographer to document how they are seen by them. I did not anticipate that the clothing removal would be such a challenge. Women are consistently objectified and asked to pose nude or topless. This was an opportunity to turn the tables and have men be vulnerable for a woman, possibly objectified by a viewer in a gallery or online at a later date, the female gaze on a man. I opted for topless instead of fully nude because I figured that topless men are socially acceptable in public, unlike women. Society sees men’s nipples different than women’s.”

The people in this exhibit are un-idealized, and yes, there is a certain vulnerability involved… a vulnerability that’s absent in Michelangelo’s practically god-like David, standing alone, naked, sling over his shoulder, facing down the giant, ready for battle.

Reflecting on how this exhibit came about, Karson said, “I began the series ‘Modern David’ as a photographic documentation of people named David. This series is to be viewed as a collection, not any one image or individual but instead as a whole. ‘Modern David’ explores if there is a common thread, aesthetically or otherwise, between participants other than name.”

By photographing each participant without normal identity cues such as clothing and accessories, in the same lighting, pose and background allows viewers to examine each David in relation to the others.

As unique individuals who have existed in society with one of the most common American names, many participants agreed to be photographed as an individual quest for documentation or validation of self. The portrait session serves as a forced self-experience, an opportunity to find calm and comfort in discomfort, an experience of the present and static documentation of current self.

With modern media skewing the perception of reality and beauty, “Modern David” celebrates real people in a static and straightforward way. Historical ideals and individual perception of any viewer are challenged by the series providing images of every willing participant, added together to form a sum of representation of modern individuals and real beauty.

“Though we share a name, we are all just bodies,” muses Fink. “Different in some ways, very much the same in others. I am not beautiful like Michelangelo’s David.  Viewing the images while fully clothed, no one in the room seemed to recognize me. And when people talked to me, and I told them I was in the piece, they asked which image was of me.  I guess clothes disguise us quite a bit.”

For my portrait, I admit I wrinkled my forehead and glared just a little in emulation of Michelangelo’s David who, like it or not, is the David and likely to remain so for a long time to come.