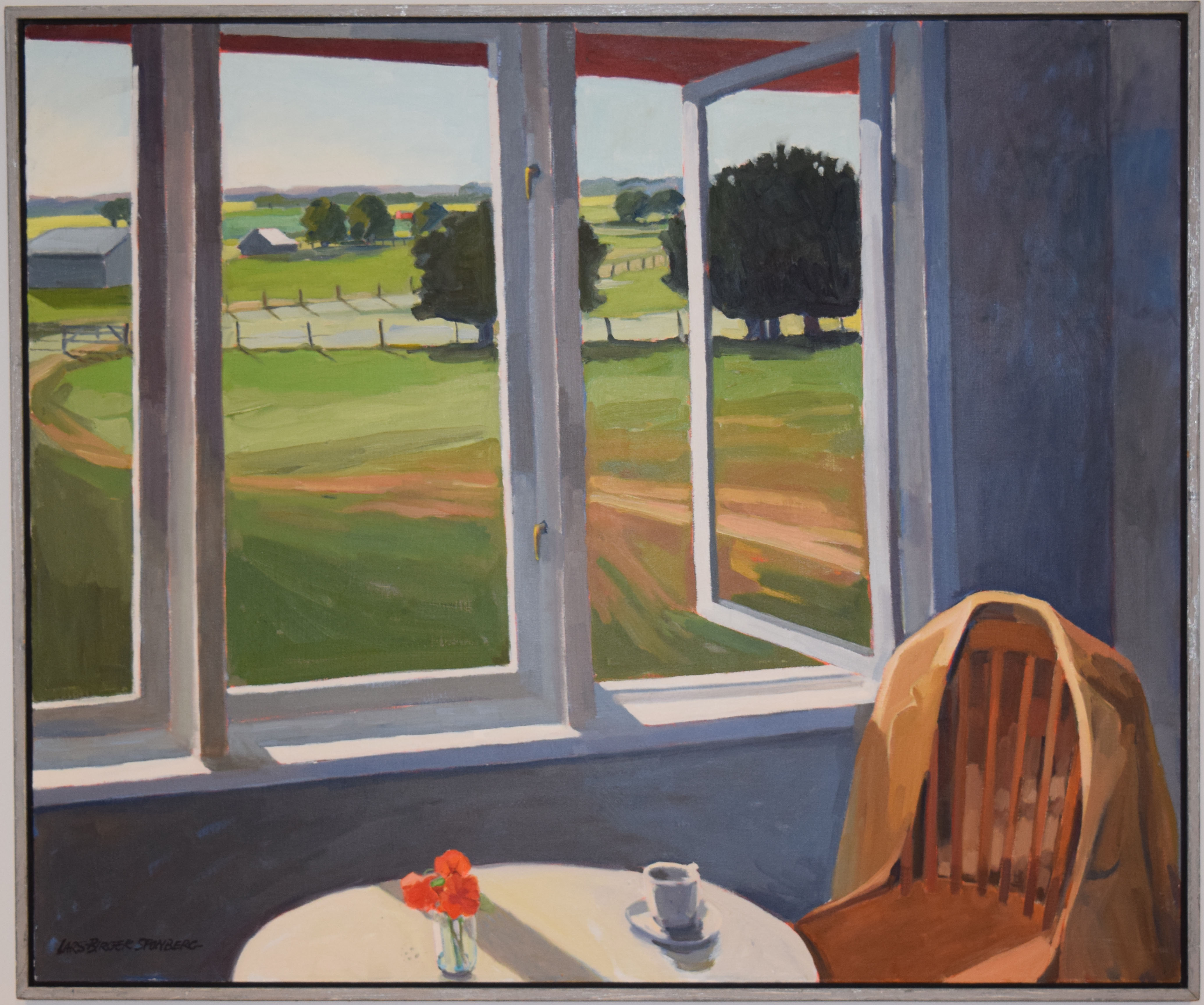 “I put very much thought into the fact that the Midwest landscapes are a good subject matter to suggest the ordinary compared to the oceans and the mountains,” so states Lars-Birger Sponberg. “Significance of the Ordinary” is the title given to this exhibit of his recent work. Mostly, his paintings view a selective southern Wisconsin countryside through the window of a passing automobile. This may appear quite ordinary to him, but for most of the world, it’s more like a rural fantasy: perfectly well-kept roads, fences, fields, homes and barns. No junk, no ruins, no billboards, no poverty, no dead trees, no dead anything. There’s a sense of the earth as a soft, heavy, reclining figure and it’s always a clear, bright sunny day.

The mood is generally so upbeat, I feel immersed in a cheerful Disney animation from the 1940s. Yet there is also a loneliness. Neither people nor animals can be seen in these roadside vistas and occasionally the mood turns somber. Just like the buildings painted by Edward Hopper, his box-like, purple-shadowed farmhouses loom ominously with dark secrets. As in Van Gogh’s final painting, one road ends abruptly before it reaches the horizon. Sponberg has marked it with a road sign—“Dead End”—which itself seems in the process of decay. In ”Oft Remembered Hills,” majestic telephone poles, resembling cemetery crosses, recede into the distance with the grandeur of a Romantic Requiem.

Most of these paintings were done when the artist was over ninety-five years old, so it’s not surprising that death was occasionally on his mind. What is remarkable, however, is his usual cheerfulness, and the sharpness, vigor and apparently endless variety of design. One might call him a Midwestern Regionalist, the genre current at the School of the Art Institute of Chicago when he studied there in the forties. Yet he has also been inspired by the post-Abstract landscapes of Richard Diebenkorn. Even more than hills, barns and trees, his paintings are about paint, brush strokes and compositional dynamics.

Two undated interior views are included; they are my favorite pieces. In “Bedroom on a Lake,” the windows of three walls wrap around a sparse hotel room that projects above a recreational lake. Wouldn’t you want to press your face against the glass and look at the sailboats? That’s exactly what the solitary human figure, the only such one in the entire exhibit, is doing. In “Small Bouquet,” red flowers and a coffee cup rest on a small table beside three tall windows that face the kind of bright, cheerful rural property that the artist loves to paint. Beside the open window, an empty chair faces the table, a man’s coat thrown across the back. Apparently, we just missed him. As it is within his drive-by landscapes, he was just passing through. American Scene painting is too outdated to be validated as contemporary art, but Sponberg’s work, like the man himself, is nearly timeless. (Chris Miller)

Lars-Birger Sponberg’s “Significance of the Ordinary” shows through March 12 at the Swedish American Museum, 5211 North Clark.