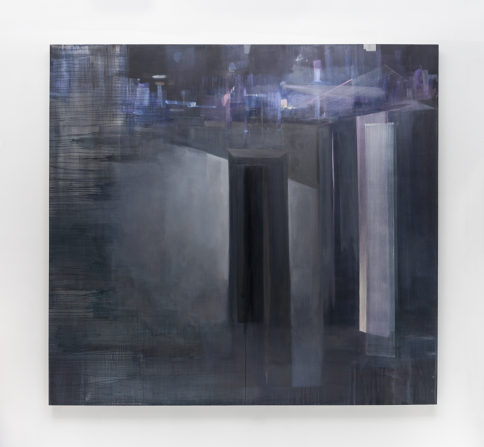 Murray’s recent paintings appear to be a significant departure from his signature deconstructed domestic objects, yet in actuality, they are an apt extension. This new body of work forefronts voids, frames-within-frames and lens-flare-like light. In several works, interference paint glitters to further fracture architectural spaces, making them all the more alluring. The exhibition title, “In Life Review,” refers to near-death experiences “in which a person rapidly sees much or the totality of their life history in chronological sequence and in extreme detail,” says the exhibition literature. Murray establishes his painting investigation between the speed and density of marks and the ever-unfolding task of perception. Surfaces suspend time as tangible form dissolves into an ephemeral atmosphere. The montage sequence becomes instantaneous in the painting “INT/EXT. BEDROOM – LAKE – DAY/DUSK (Spinning)” as transparent books without spines verge on purely monochromatic abstraction. Murray’s process of constructing space parallels the way in which memory defies chronological conventions and retrieves uncontrollable shifting associations. 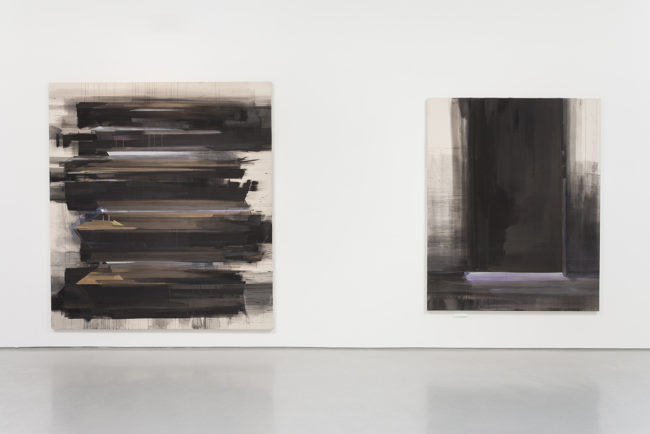 As a perceptual counterpoint to this rapid montage, Murray makes overt reference to Michael Snow’s landmark, forty-five-minute continuous fixed-zoom film, “Wavelength.” Murray’s meditations on floors and walls flicker as they strive to defy their inherent static nature. Horizontal drips defy gravity to destabilize both the viewer and the picture plane. In “CLOSE – DOOR” one can presume a mutual affinity to Jacqueline Humphries’ silvery film-projection-screen paintings. In “TRACKING SHOT – TUNNEL (Racing),” stains move with centrifugal force against raw canvas that rapidly performs its own becoming and unraveling. The influence of Kenneth Noland’s bullseye composition is inescapable. Unlike moving images, paintings do not demand specific increments of time for viewing. Instead, they perpetually perform a circuit of meaning in and out of which the viewer momentarily slips—a truer representation of experience than the limits of narrative can contain. The works affirm that the only constant is change itself and that to achieve stasis is to greet death. (Nicole Mauser)