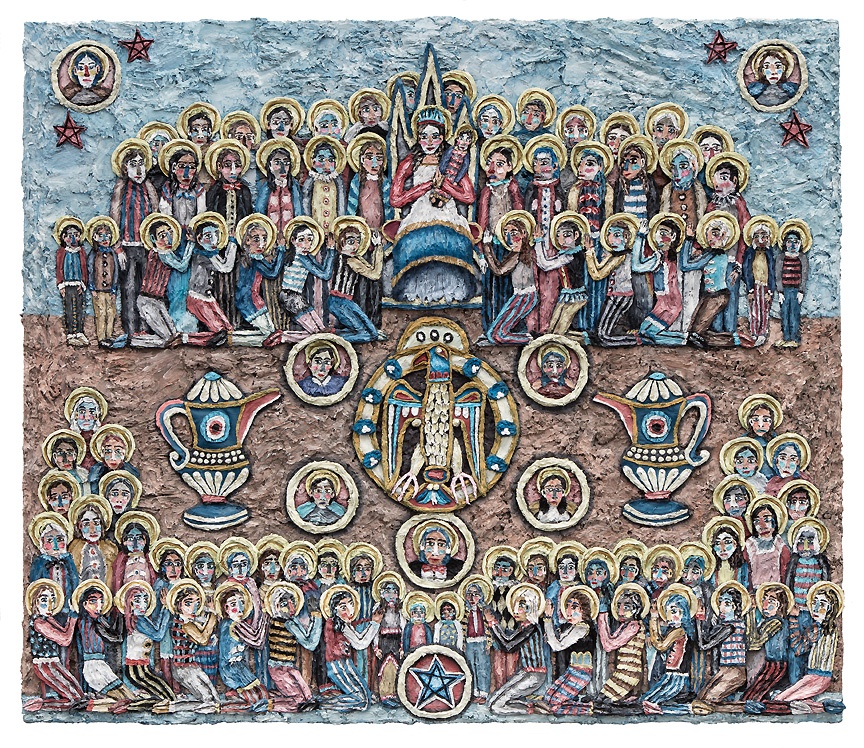 Seventy-five years after the first production of “Four Saints in Three Acts,” an opera by American composer Virgil Thomson with a libretto by Gertrude Stein, the DePaul Art Museum is exhibiting seven contemporary artists who also “appropriate the iconography of saints and other religious forms in order to critically explore their relationship to this imagery.”

In order to make a provocative production even more so, the entire cast of the original 1934 production at the Wadsworth Atheneum museum (fittingly known for its collection of European Baroque art) was black. In DePaul’s exhibition, Kehinde Wiley and Devin Mays have expanded that tradition to the point where blackness itself is the subject matter, rather than the figures of Saint Roch or Jesus Christ whom they depict.

In contrast to all of the above, Andrea Büttner is fascinated by piety. Her graphic works conflate poverty with spirituality. Her video documents the spontaneous interactions of cloistered nuns assembling a modest craft display.

Often these artists have referenced specific artists of the past, including Simone Martini (Spota), Barlach (Büttner), Bernini (Zendejas), Paolo Morando (Wiley). By comparison to their inspirations, the contemporary artists give little incentive to return to their work. You see it, you get the idea, you move on. They offer critical ideas, rather than embedding some cosmic mystery within a dense visuality.

Yet several of them could likely make work for sacred spaces. In larger pieces shown elsewhere, Ramirez achieves the aspiration that his smaller work in this show can only suggest. Büttner’s other, more narrative prints can be as powerful and evocative as a Medieval woodcut. The twelve artist-saints by Zendejas are intentionally as insubstantial as the playful concept behind them. But above, hanging upside-down from the ceiling, are nine headless figures. Their inversion emphasizes a dynamic intrusion into space that echoes rather than merely signifies Baroque sculpture.

As in the original opera, almost all the religious references are Christian, but none of the art expresses any faith in Christianity. While it may or may not be meant in mockery, a person of faith might well query whether any of these critical explorations have discovered anything new, important or beautiful. I don’t think so. The same question, however, might just as well challenge the museum’s accompanying exhibition of conventional nineteenth-century representations of Saint Vincent de Paul. Neither faith, nor the lack of it, necessarily inspires great art. (Chris Miller)