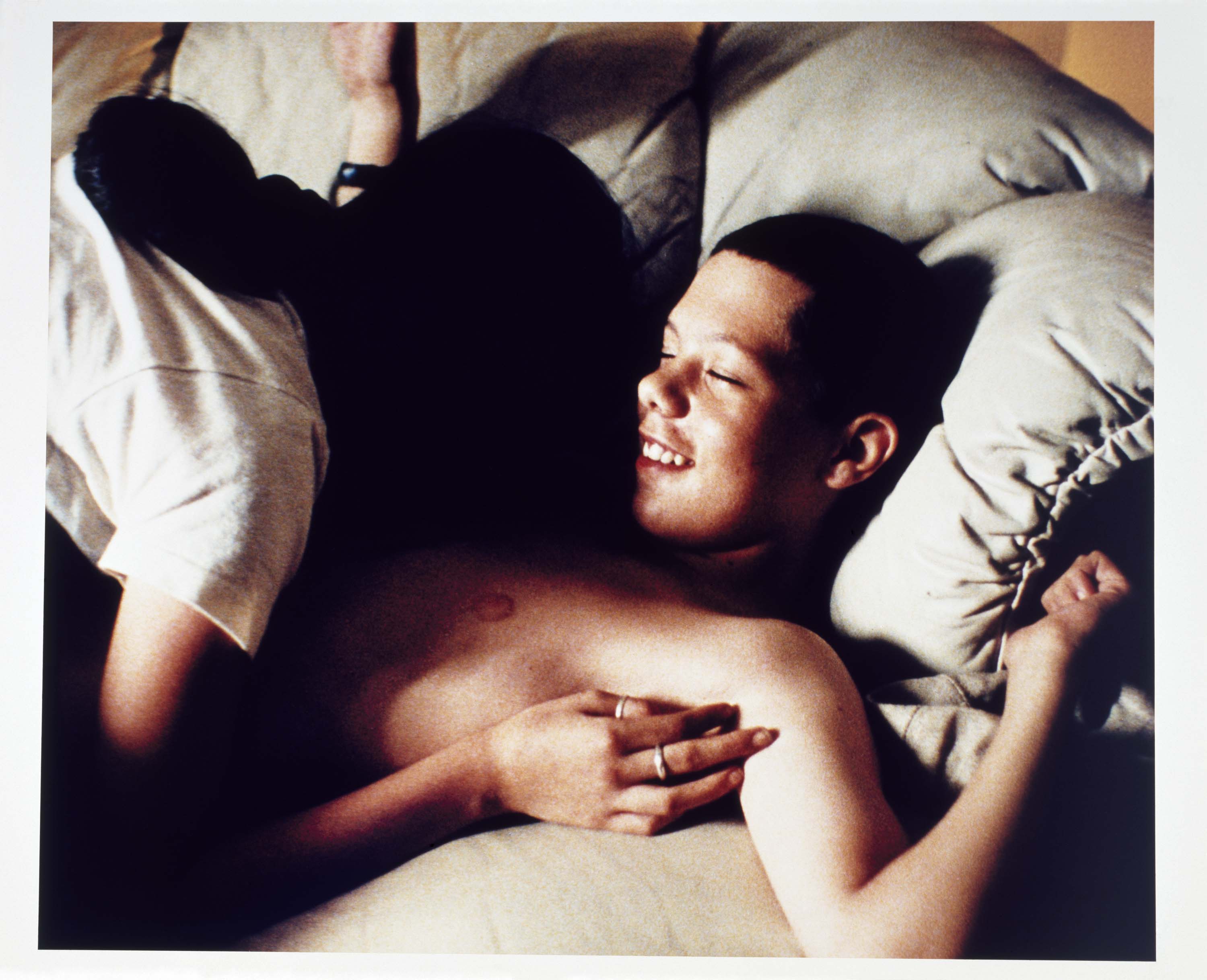 An old saying goes, “The remembrance of youth is a sigh.” The audible release of sadness, exhaustion and relief as spent breath escapes the body, sighs express the ineffable edges of loss and nostalgia, a kind of bittersweet mourning mingled with bruise-poking pleasure. Modern societies have long fetishized youth through a media machine that largely exploits the fears and desires of those who believe they have already lost it. The paradox of youth worship is its inherent urge to preserve the effervescent, a lepidopterological inclination to pin down the things we love for their very flightiness—to mount a butterfly under glass.

Art has fulfilled this self-contradictory human impulse for millennia, from the strapping marble nudes of Archaic Greek kouros statues to the Art Nouveau nymphs of Alphonse Mucha’s JOB lithographs, now on permanent display in your nearest college dormitory. Our ceaseless fixation on youth is precisely that—a will to fix an image of our finest moment that will outlive our ever-aging selves entirely. It is fitting then that the Museum of Contemporary Art’s foray into this timeless subject is titled “Eternal Youth,” because it points right to the fraught heart of the matter. The images on display—most of them photographs, but some of them painting and sculpture—reflect forty years of society’s increasingly accelerated fascination with the spirits and bodies of young people, from sixties counterculture right up to our endlessly Instagrammable present.

Among the more contemporary shows put on by an institution that too often veers far into the historical side of its mandate—see contemporary, “belonging to or occurring in the present”—the exhibition nonetheless stems from the distant beginning of this recent canon. Curator Omar Kholeif points to a portfolio of stills from Larry Clark’s seminal 1995 feature film “Kids” as the seed of the show, but the earliest works in the exhibition come from Clark’s infamous “Tulsa” series, photographed by a twenty-year-old, amphetamine-addicted Clark in the early 1960s and first published a decade later. The black-and-white images of young, shirtless male bodies aptly foreshadow the queer lilt of the rest of the show while also alluding to the looming specter of the coming AIDS crisis, the height of which this exhibition mercifully passes over to picture how its aftermath transformed the social imagination of youth in the nineties and the early aughts. This, above all, is the exhibition’s paramount achievement, though it has others. After Helen Molesworth’s definitive take on the art and visual culture of the eighties in her landmark exhibition “This Will Have Been,” which the MCA hosted in 2012, the subject felt firmly explored. And despite the laudable effort of the DePaul Art Museum to revise the art-historical record on race and broader spectrum queerness during the AIDS crisis with its recent exhibition “One day this kid will get larger,” little work has been done to examine how the succeeding decades’ visual culture absorbed and transformed these AIDS-ravaged notions of fragility, sexuality, desire and play on its favorite victim-hero, the youthful body. 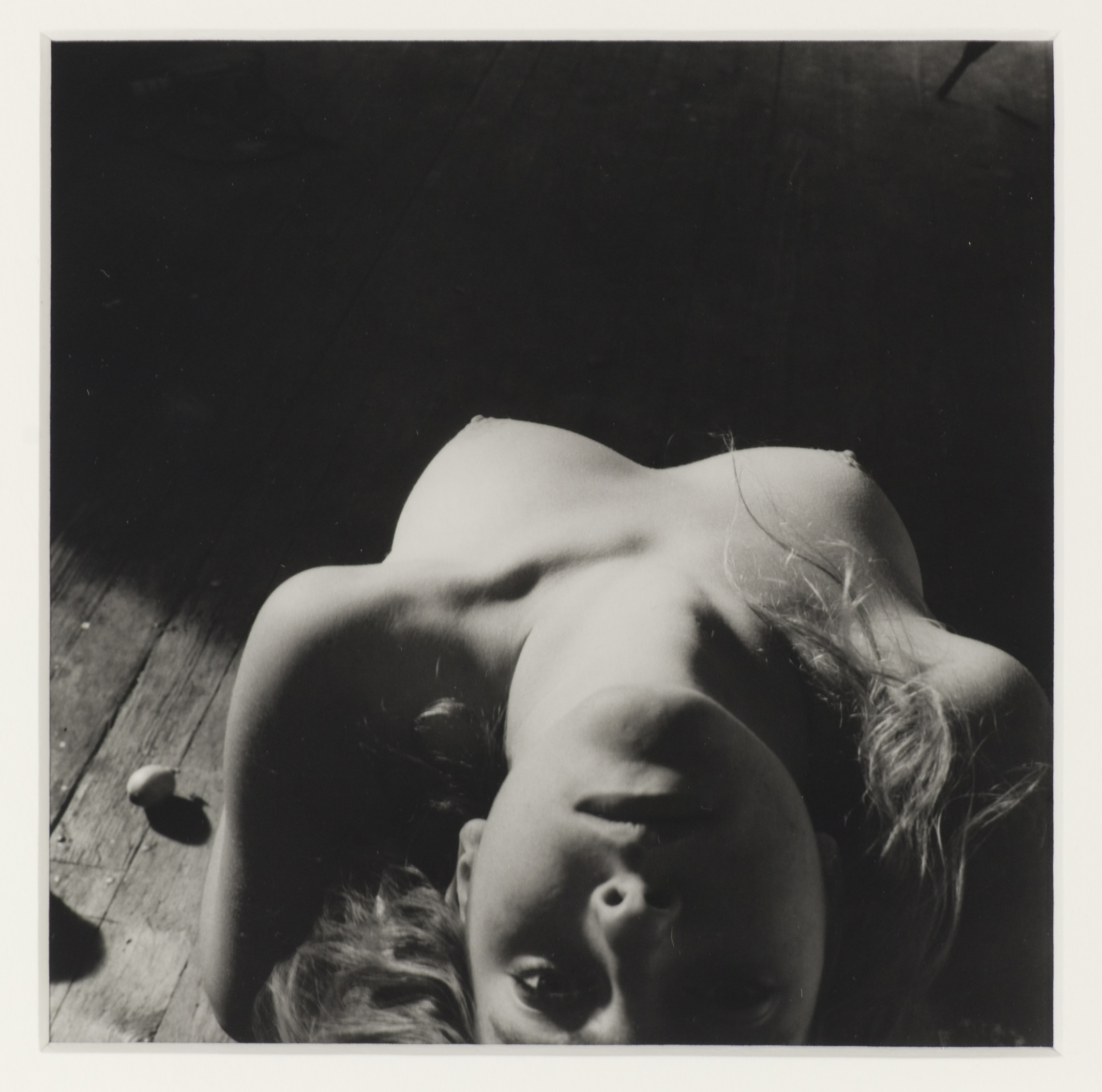 Beneath the superficial pleasure of peering at young, supple bodies lurks the viewer’s unavoidable complicity in the very mechanisms of desire that the show seeks to deconstruct. Near Clark’s early photographs are an enigmatic trio of intimately scaled gelatin silver prints by Francesca Woodman. In seductively gentle greyscale, Woodman’s self-portraits appear at once playful and sinister, as if she has all-too-knowingly posed herself in the easy forms of male desire; her bare chest heaves toward the lens in “On Being An Angel, Providence, Rhode Island, Spring 1977.” Woodman’s death at age twenty-two, a tragedy that ironically spurred the critical attention that her work did not receive during her lifetime, contorts any pleasure one might derive from these images toward a sense of shame perhaps closer to the sentiments of the subject who took them, and who took her own life.

“Time isn’t Real” declares a hand-scrawled text on the surface of a soft pink painting by Paul Heyer near Woodman’s photos. In this show, chronology is certainly out of joint. From the beginning, the first gallery shows no signs of a clear path to follow, starting with Eddie Peake’s spray-paint-and-polished-steel composition “Destroyed by Desire,” a new work and recent addition to the permanent collection of the MCA. Clark’s suite of stills from “Kids” leads to a wall of early nineties Robert Mapplethorpe and Joe Ziolkowski photographs of muscular men posed in aesthetic, vaguely athletic positions. Next to them is the exhibition’s strangest and most subtle gesture, a vitrine of original Calvin Klein magazine advertisements featuring black-and-white photographic spreads of Mark Wahlberg taken by Herb Ritts, himself a victim of AIDS around the time that he made these modeling shots. The whiteness of Wahlberg’s skin and his briefs transubstantiate all that is fragile and queer about Mapplethorpe’s and Ziolkowski’s models into the very picture of heteronormative virility. The portraits of Wahlberg, as he pulls at the seams of his briefs or clutches his groin, repeat across the magazine spreads like the composition of an early Warhol screen print—think “Eight Elvises” (1963), but with Marky Mark instead. These repetitions enhance the sensation of forgetfulness that sustains the myth of eternal youth in the feedback loop of popular culture’s image machine and the nostalgia that at once consumes and feeds it. Forgetting, it seems, is not only a curse of the aged but is also the means of constant renewal for a Fountain of Youth that must never dry up.

A majority of the works in the show come from the museum’s permanent collection, and several are oft-shown favorites. Jeff Koons’ “Pink Panther” (1988), Felix Gonzalez-Torres’ “Untitled (The End)” (1990), and a smattering of photos by Wolfgang Tillmans, among others, arouse a certain nostalgia for the well-trodden art history of the late eighties and early nineties, as if Kholeif and curatorial assistant Grace Deveney browsed the museum storage looking for some dependable hits to anchor their throwback mixtape. Much more apparent are how many new and heretofore unseen works fill the galleries—some acquisitions and others lent directly from the artists or their galleries. Normally, this kind of borrowing appears like art-world nepotism, especially if the artists are emergent and stand peerless with the tried-and-true work of established names. In this case, however, these works add, yes of course, youthful vitality to what could otherwise have been a typical gallery turnover of weary work.

Two more fresh paintings by Heyer, both of skeletons engaging in Tillmans-style makeout sessions and drug-huffing a-la-Clark, please the eye just as well as they drum out the tired admonitions against youthful excess. Recent paintings by former Chicagoan Andrew Holmquist—“Swimming Meet” (2015) and “The Boys Are in the Bathroom” (2014)—blaze joyful, juicy strokes across large canvases, positing a kind of exuberant, queer abstraction that feels entirely newfangled. Between Heyer and Holmquist, painting seems urgent again, or at least youthful enough to delight. A series of greyscale digital photographs by John Neff, last exhibited in Chicago at his Renaissance Society exhibition in 2013, were rendered from linear scanners outfitted with the lenses and bellows of antique cameras. The resulting grainy, intimate portraits of friends and lovers are digitally noisy and yet breathtakingly still. Neff’s prints offer an uncanny, queered pendant to Woodman’s self-portraits on view across the room. 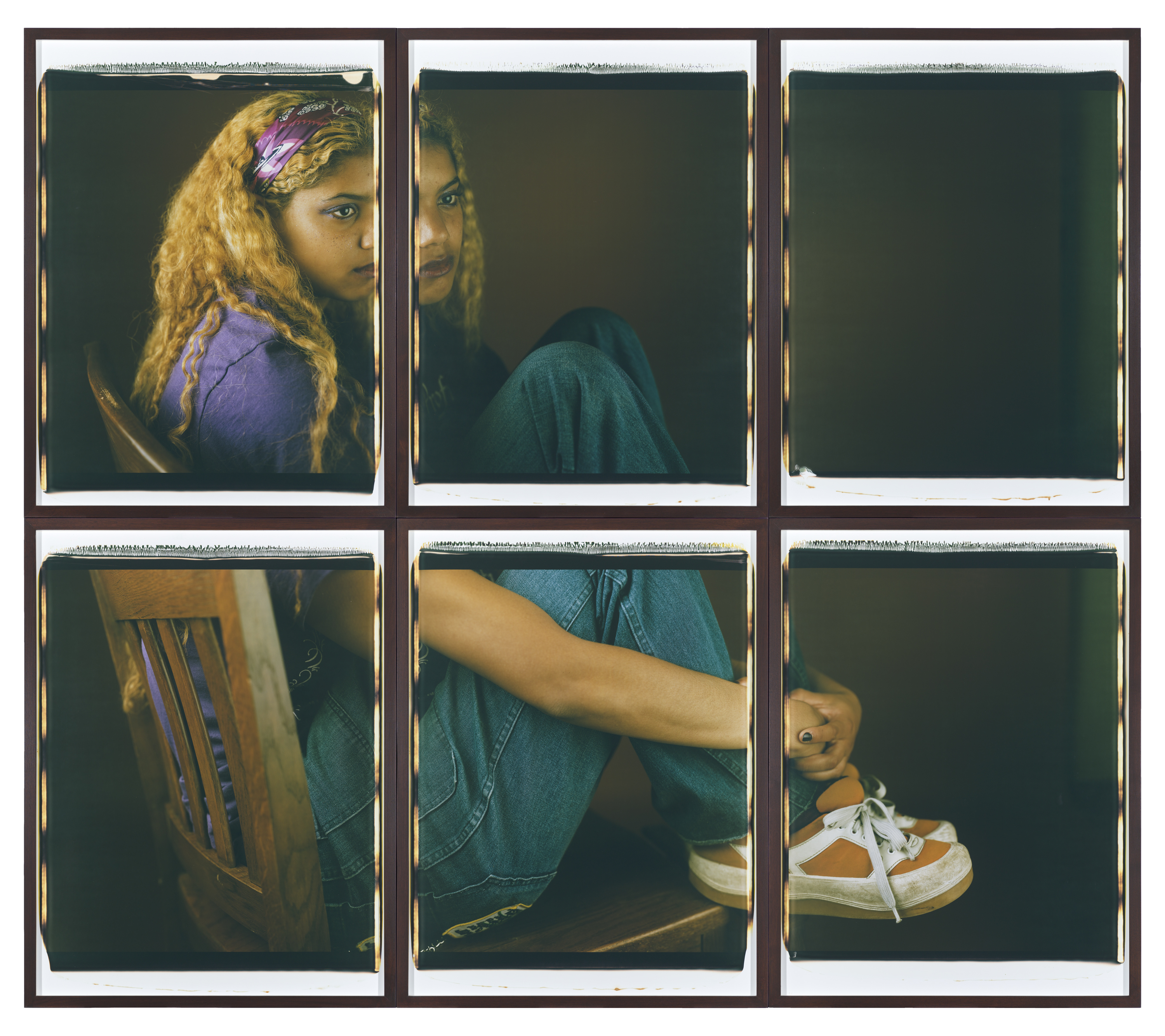 Of course, abutting the new against the relatively old risks the former falling flat on its face. A large, aluminum-mounted photograph by Amalia Ulman, a washed-out and pixelated mirror selfie of the artist in character as a self-absorbed millennial in the midst of a months-long social media performance, proves that—with apologies to Frances Stark—Instagram has not yet found its place in the museum. Indeed, what distinguishes this show from a growing trend in museum exhibitions of contemporary art is its utter lack of spectacular selfie moments—think Charles Ray at the Art Institute of Chicago or Diana Thater at this institution, both of which traded heavily in vistas for the vain. Instead, viewers are asked to confront the recent history of youthful portraiture that has culminated in our current moment, probing the deeper history behind the image of the superficial self. In a salon hanging of several portraits, Dawoud Bey’s composite, large-scale Polaroid portraits of black Chicago youth bristle with intimate details and grand pathos. A self-portrait of Rashid Johnson, fashioned in the appearance of recently resurrected Frederick Douglass—perhaps the president saw Johnson’s photograph and mistook it for a recent headshot?—signals volumes about the lofty aspirations and terrible treachery inherent in the performance of an identity, whether it is the public self or the roles that the weight of history casts upon us. Last but far from least, Nan Goldin’s color snapshots of New York’s early nineties queer underground ring truer than anything yet seen on a social media feed, so says this millennial critic.

Years ago, I found myself falling in love with someone of the generation before mine. In our ambling walks through New York City, where she spent her adolescence and some of her university years, she regaled me with tales of her wayward youth—dances on bar tops, bathroom bumps in clubs with lax security for pretty young girls, broken hearts and battered bodies. In some of her stories, she was as young as I was upon hearing her tell them, and I found myself at once jealous and protective of her younger self, wishing I had met her then and there and not, as it was, years too late. One evening while having a drink in an old haunt where she once quarreled epically with a lover, my heart welled with a strangely familiar emotion—that is, nostalgia for a life that was not my own. I should have realized then that youth will always appear glorious and wasted in a backward glance. Instead, I had to squander a few of my own precious years before I could contribute to that eternal chorus of tired sighs. Looking back on my youth through the gaze of these artworks, I sense pleasure, exhaustion—and yes, some kind of relief.

“Eternal Youth” shows through July 23 at the Museum of Contemporary Art, 220 East Chicago.