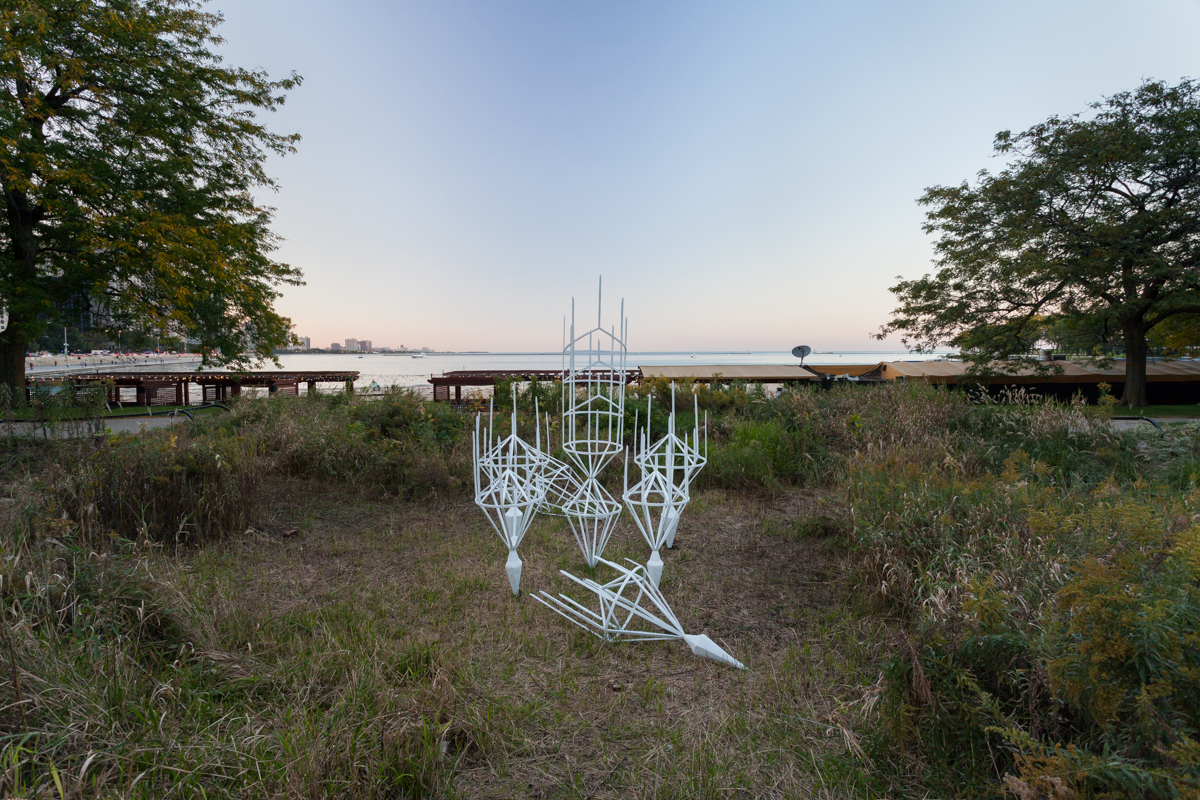 In the Sufic tradition of visionary poets like Rumi and Omar Khayyam, artist Afruz Amighi has written: “We have been waiting for you to come… Even in our ungoverned hours, we are possessed by the specter of you.” Those words accompanied a 2014 gallery installation of her white-steel-and-epoxy constructions titled “Far from God.” Echoing the delicate geometries of classic Islamic architecture, the structures resemble toppled minarets. The sharp pointed tips might suggest the pangs of separation. Specific lighting casts dim shadows that might suggest the fading memory of tradition over time.

That same piece is now on display in Jane Addams Memorial Park, where the outdoor setting gives it a more public and political context. Beside it is the urban playground of Ohio Street beach. Above it rise the towering glass-and-steel edifices of Chicago’s urban canyons that are not unlike the buildings in New York destroyed on September 11. The installation has been set into a concave depression in the earth, not unlike a bomb crater. Rather than fallen minarets, the individual elements now suggest fallen rockets similar to the artist’s “Rocket Gods” from 2010. As the artist explained it, that earlier piece referenced “the flourishing weapons industry of the United States during its operations in the Middle East.” In this context, however, the minaret-rockets appear to be scolding Islam for conflating militant terrorism with spiritual aspiration. It is the faith itself, the community of believers, which has fallen “far from God.” Such an interpretation is congruent with the artist’s own background. Though born in Tehran, her parents were Jewish and Zoroastrian, two of the most persecuted groups in the Islamic Republic of Iran.

There is no doubt that autocratic, militant leaders have been killing people and preaching Islam in the past and present. Yet it is also true that many more followers continue to pursue the faith for more spiritual goals, and that is the message that a public park in Chicago might better be sharing as the Trumpian era begins. (Chris Miller)