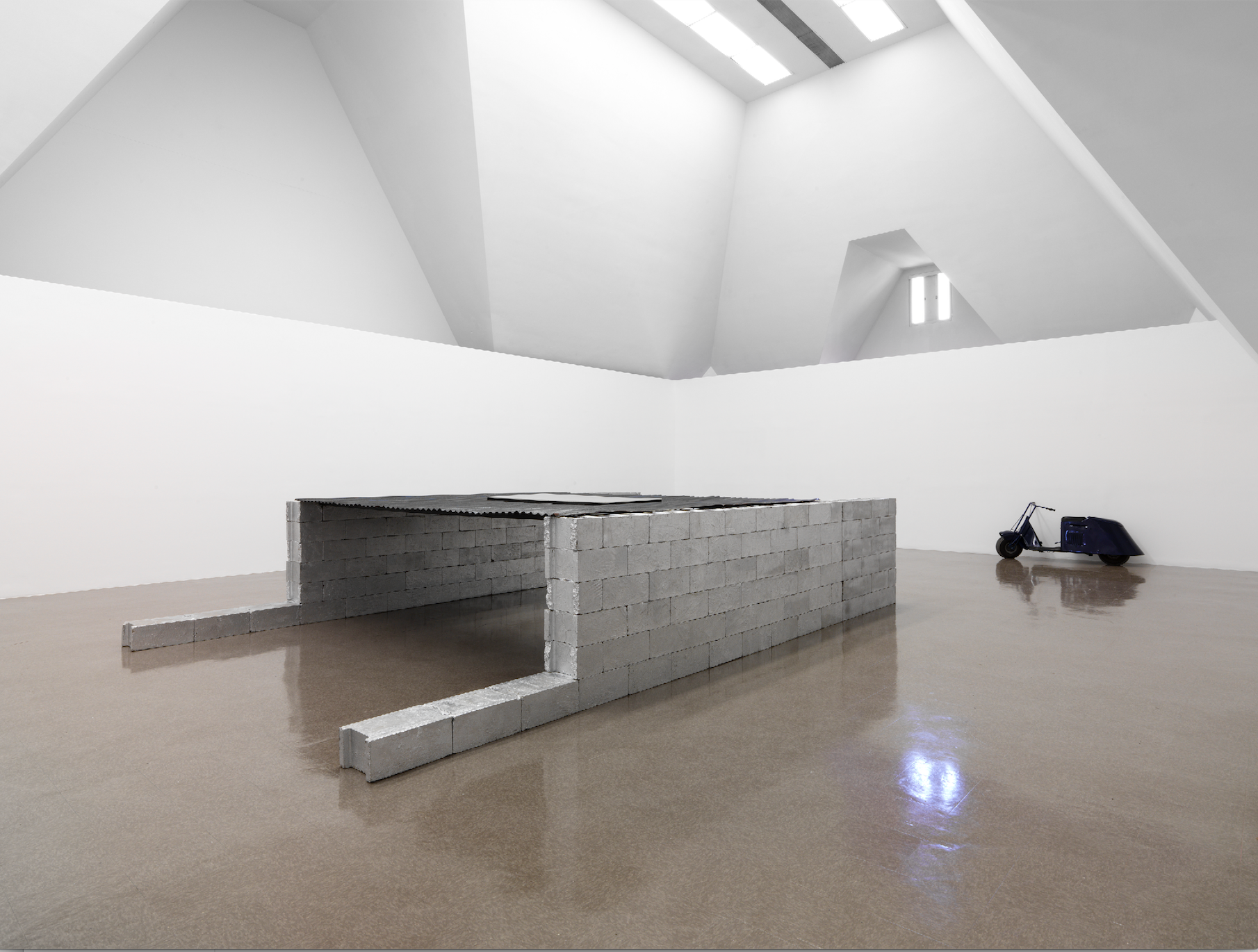 The path we navigate each day is determined largely by the walls built around us. And in these polarizing times, walls have come to represent divisive and exclusionary politics. The intimate alcove that opens to the main gallery at the Renaissance Society acts as a gentle guide until, rather abruptly, you come face to face with the concrete structure that is Robert Grosvenor’s sculptural work “Untitled,” made between 1989 and 1990.

The silver spray-painted cinder blocks stacked six-rows-high glisten in uniformity; their bright sheen suggests weightlessness despite their obvious heft. Separated by approximately ten feet, the two walls are linked by a large, corrugated piece of steel that rests over top, acting as a bridge and a roof between the two. In the center of the steel sheet, a large rectangle has been cut out and replaced by an equal-sized piece of Plexiglass, effectively creating a skylight to the floor below. “Untitled” dominates the gallery space, the perimeter walls of the gallery and the high, naturally lit, vaulted ceilings have succumbed to this welcomed intruder.

Over the course of his fifty-year career, Grosvenor has made sculptures that indulge in a playful exchange between industrial materiality and the traces of the hand that has constructed them, leaving viewers to ponder whether things are always as they seem. However, in the case of “Untitled,” I find it difficult to detect the subtle humor that is so often used to describe Grosvenor’s works, perhaps a consequence not unfounded when considering the context surrounding the work’s inception.

The year 1989 was a contentious one wrought with politically charged events, including the collapse of the Berlin Wall and student demonstrations in Beijing that resulted in the Tiananmen Square Massacre. At the time, “Untitled” would have borne the weight of these events while simultaneously offering up a beacon of hope—a sliver of light cast through the window situated within the impenetrable rust latent steel cover.

Can the work once again rise to the occasion of absorbing the numerous anxieties reflected in today’s refugee crisis, border debates involving the United States and Mexico, and workers’ rights violations of those responsible for the construction of iconic architecture worldwide? Let the anonymous hands of those involved in these struggles be revealed within Grosvenor’s concrete blocks, and may shelter be sought under the steel roof and within the space between these two walls. (Denise Joseph)