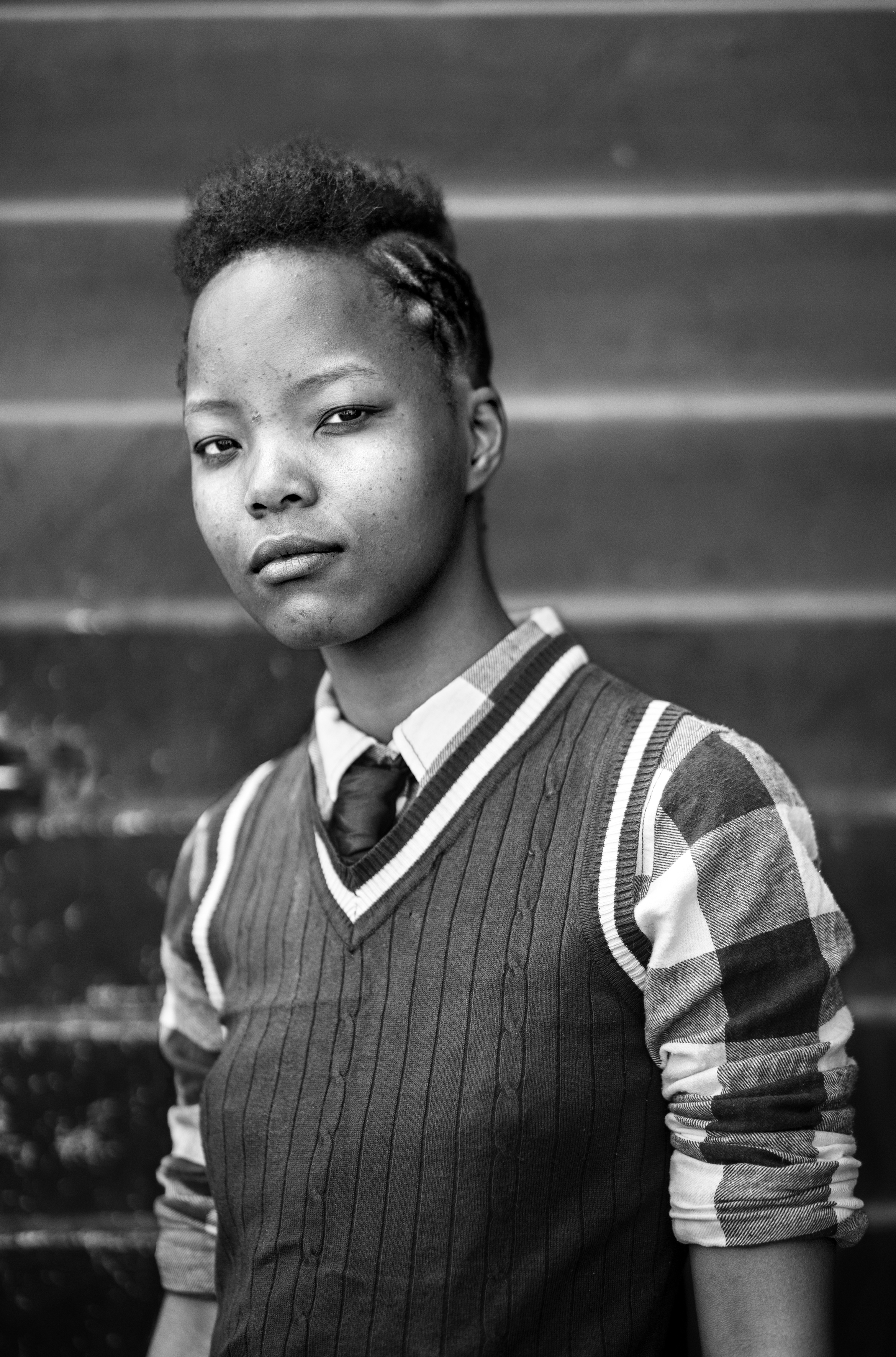 “All human beings are born free and equal in dignity and rights. They are endowed with reason and conscience and should act towards one another in a spirit of brotherhood.”

So states Article I of the United Nations Universal Declaration of Human Rights, adopted by the United Nations General Assembly on December 10, 1948 in the immediate aftermath of the Second World War. Never before had such destruction been wrought on a global scale, culminating in the barbarity of the Holocaust and the total wartime loss of life estimated between seventy and eighty-five million worldwide. Although the 1945 United Nations charter reaffirmed “faith in fundamental human rights, in the dignity and worth of the human person,” the War proved that those rights were not adequately enumerated. Hence, the establishment of the UN Commission on Human Rights, which drafted the Declaration after two years of research.

On the cusp of its seventieth anniversary, the Declaration’s thirty articles read like a wishlist from a time of hope long gone. “Everyone is entitled to all the rights and freedoms set forth in this Declaration, without distinction of any kind, such as race, colour, sex, language, religion, political or other opinion, national or social origin, property, birth or other status,” declares Article II. Article V proclaims, “No one shall be subjected to torture or to cruel, inhuman or degrading treatment or punishment.” In Article XIV, we read that “Everyone has the right to seek and to enjoy in other countries asylum from persecution.” Finally, in light of the current global crisis, Article XXVIII could make one weep: “Everyone is entitled to a social and international order in which the rights and freedoms set forth in this Declaration can be fully realized.”

In these dire times, to ask “What is an artistic practice of human rights?” is a question so unexpected that it feels strange, almost disingenuous. And yet, this is precisely the inquiry posed by a collaborative team consisting of a downtown art gallery and a handful of University of Chicago organizations. This month, Weinberg/Newton Gallery opens “In Acts,” a group exhibition of artists from the world over whose work demands new terms of engagement with art and society. With their roots in Argentina, Cuba, Nigeria, Palestine, Puerto Rico, South Africa and Chicago, the gathering of these artists in a single exhibition offers a rare and truly global perspective on the issues that threaten the most vulnerable amongst us, and by extension, the fabric of humanity itself. The show stems from a summit co-organized by a triad of University of Chicago institutions—the Gray Center for Arts and Inquiry, the Pozen Family Center for Human Rights and the Logan Center for the Arts—titled quite bluntly: “What is an Artistic Practice of Human Rights?” The two-day summit brings together the eight artists for presentations, panel discussions and a public forum in the spirit of the Gray Center’s mission of uniting arts and scholarly research. “The collaborative nature of the work done at the Gray Center gives artists access to whole new archives and methodology. Artists come to find out that their artistic methodologies can be translated into new ways of working and thinking,” says Zachary Cahill, curator of the Gray Center. Leading up to the event at the end of April, visitors to Weinberg/Newton Gallery will see some of each artist’s work on display and will have a chance to contribute to an audience collaborative project by Nigerian performance artist Jelili Atiku. 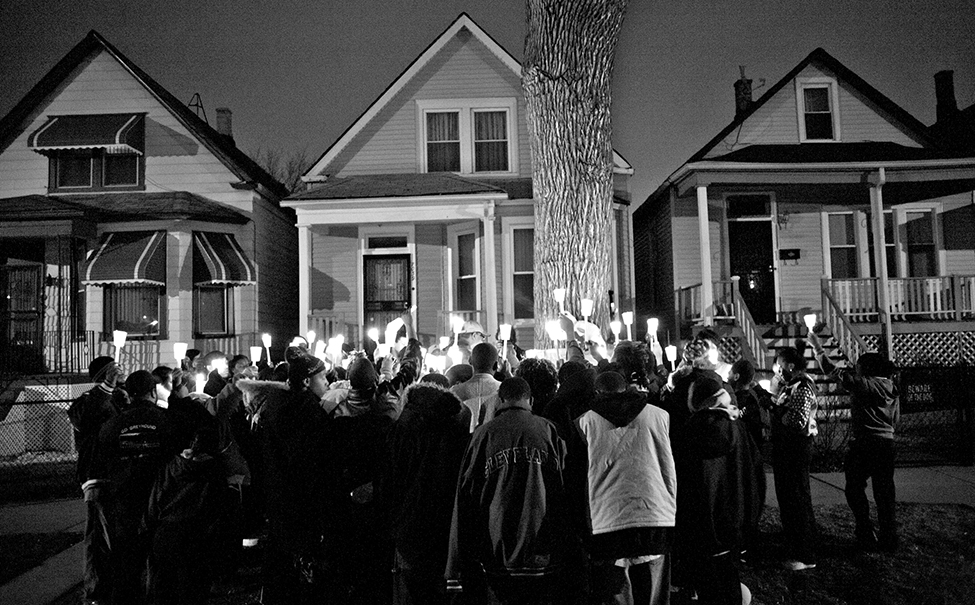 With the Trump administration rolling back federal protections for transgender individuals upon arrival in the White House, concerned Americans are right to raise wholesale alarm about the imminent threat to LGBTQIA rights at home. Zanele Muholi’s stunning black-and-white portraits of South African lesbians who survive under conditions of extreme marginalization, facing threats of discrimination, sexual assault (sometimes called “corrective rape”), and high rates of HIV infection, remind us that the global warfare against queer bodies comes in many brutal forms. And yet, as her subjects gaze confidently into the camera posed with something between princely dignity and downright swagger, one cannot help but feel the power engendered by such everyday and extraordinary resistance to extreme oppression. These portraits are as much object lessons as they are objects of beauty.

The power of images to transform perception carries through in the work of Carlos Javier Ortiz, a cinematographer and photographic documentarian whose haunting and elegiac short films “We All We Got” and “A Thousand Midnights” trace the deep roots of American segregation through the Great Migration to the present violence in Chicago’s African-American communities. Ortiz, who has shown “We All We Got” at Weinberg/Newtown when it was called David Weinberg Gallery, returns with a new work fashioned from unused footage shot for both films, this time presented on two channels and running longer than the previous shorts. Viewers familiar with Ortiz’s work will be grateful for the opportunity to see a more experimental side of his practice, yet one still steeped in a reverence for his subjects and a commitment to showing them on their own terms. Ortiz’s meandering, unsteady camera seems to float listlessly through the Deep South and the South Side, picking up disparate threads and weaving them into a gut-wrenching narrative of ongoing dispossession and steadfast resilience. With Presidential threats to “send in the Feds” to Chicago, the work of Ortiz reveals the images—both beautiful and tragic—that we least often imagine when our city makes headlines.

Lola Arias, an Argentinian writer and theater director, presents “Veteranos/ Veterans” (2014), a five-channel video installation that embellishes fact with fiction in narrative accounts of five Argentinian veterans of the 1982 Falklands War, a conflict over sovereignty of the Falkland Islands and South Georgia and the South Sandwich Islands waged between British and Argentine forces. Artists Laurie Jo Reynolds and Tania Bruguera—well known to Chicago artists and activists for their work on prisons and immigration and political oppression, respectively—are welcome voices to the conversation on Human Rights taking place in the gallery throughout the run of the exhibition.

For students of history, there is a painful irony that the Universal Declaration of Human Rights was signed into being in the midst of the 1948 Palestine War—called the “Nakba” (Catastrophe) in Arabic and “Milchemet Ha’Atzmaut” (War of Independence) in Hebrew—in which Jewish European migrants to British Mandate Palestine, some of them displaced by the atrocities of the Second World War, clashed with Arab Palestinians and the British occupying forces. More than 700,000 Palestinians were displaced in this conflict and more than four hundred Palestinian villages destroyed, along with portions of the region’s major cities. Sixty-nine years later, Palestinians living in the Gaza Strip and the Occupied West Bank still lack the protections of the Declaration’s Article XIII (“Everyone has the right to freedom of movement and residence within the borders of each State. Everyone has the right to leave any country, including his own, and to return to his country.”) and Article XV (“Everyone has the right to a nationality. No one shall be arbitrarily deprived of his nationality nor denied the right to change his nationality.”) 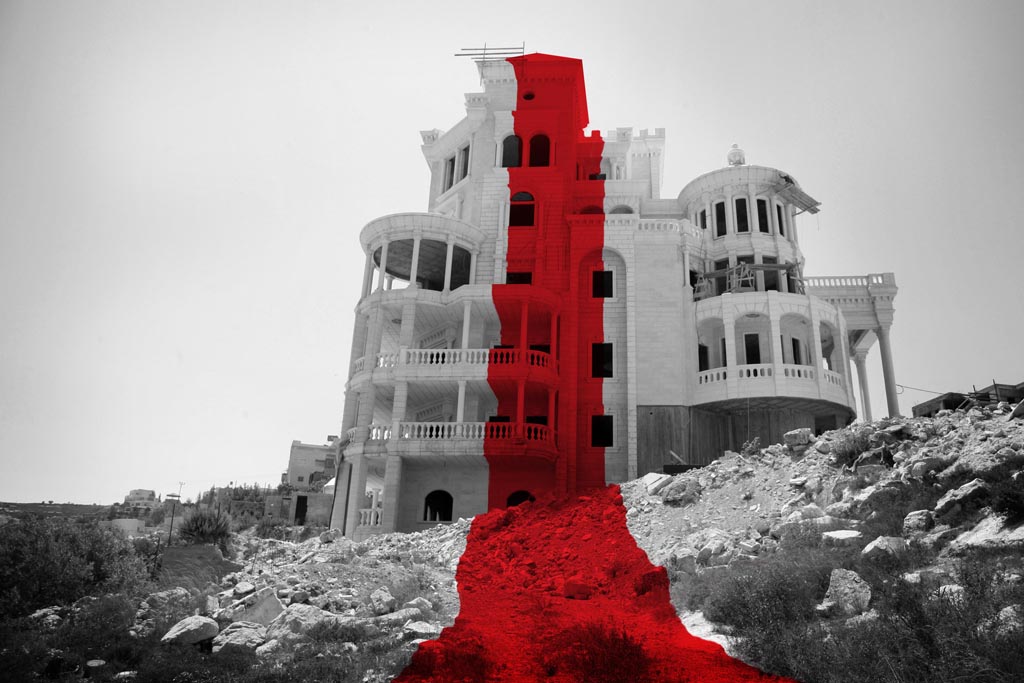 Dedicated to analyzing the complexities of this ongoing injustice, Decolonizing Architecture Art Residency (DAAR) is a collaborative of Sandi Hilal and Alessandro Petti based in Beit Sahour, Palestine. Established in 2007 with the support of Israeli architect and scholar Eyal Weizman, DAAR investigates the possibilities for structural decolonization of occupied lands, generating both speculative designs and actual interventions into evacuated military bases, destroyed villages, and in-use refugee camps. In “The Lawless Line,” DAAR considers the material implications of cartographic designs, examining the lines drawn on maps by Israeli and Palestinian representatives during the 1993 Oslo Process, which sought to clarify territorial claims among the two parties. Although less than a millimeter thick when drawn on the scale of 1:20,000, the Oslo line measured more than five meters wide on the ground, designating an ambiguous no-mans-land within dan already disjointed and contentious territory and sowing more confusion than clarity in the heart of this historic conflict. While DAAR will not have work in the exhibition, they and most of the artists will participate in the summit at the University of Chicago’s Logan Center for the Arts at the end of April. The weekend will begin on Saturday April 29 with a day of presentations by the artists, followed by a closed session on Saturday for the participants to share their work and ideas with each other. On Monday, the summit with conclude with a day of panel conversations and a public forum open to all.

The notion of an artistic practice of human rights might seem like an unaffordable luxury in the present world order. However, artists historically have borne the burden of such avant-gardism, running ahead of the world as we see it and showing us the future before we can imagine it for ourselves. Perhaps because they exist in a state of constant precarity—financially, politically and socially marginalized as they often are—artists find themselves too often at the limits of economic and social norms, pressed into practicing a kind of frontierism they do not always wish to pioneer for the rest of us. There is nothing sexy about this position, though we romanticize it heavily in mainstream culture. I have long suspected a subconscious, counterintuitive reason for our collective fixation on the artist-as-revolutionary: in many ways, the artist is the resilient neoliberal subject par excellence—fractured, isolated and always on the hustle; consumed with making it on the everyday and yet somehow still able to contemplate the nuances of the superstructures that keep us all down. The artist is our collective alter ego, living the life we dare not. Now more than ever, it is time that we forget this fantasy and join them.

“In Acts” shows from April 7 to June 10 at Weinberg/Newtown Gallery, 300 West Superior. “What is an Artistic Practice of Human Rights?” takes place on April 29 and May 1 at the University of Chicago’s Logan Center for the Arts, 915 East 60th.