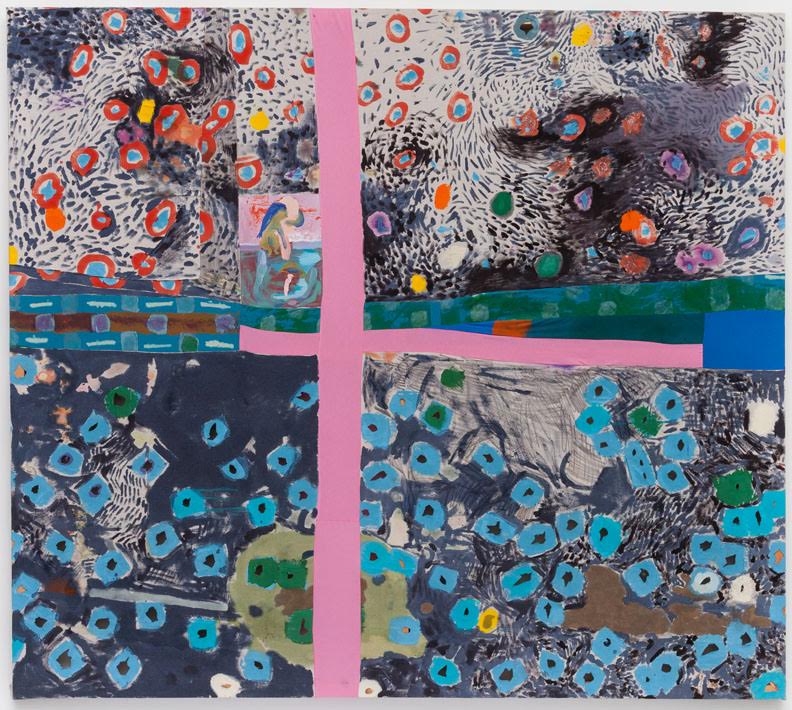 Molly Zuckerman-Hartung, “Georgia, or Take Me Back Take Me Way Way Way Back.” Dye, oil, and acrylic on sewn fabric, 72 x 81 inches

At times, this staggeringly diverse assortment of elements is overwhelming, particularly at close range. It’s only at a distance of ten or fifteen feet that frenetically assembled works such as the red-pink “History Painting for the New Queer Subject” or the wood-laden “Jennifer Jason Leigh Handcuffed to Kurt Russell” cohere as formalized compositions. But beneath this seemingly radical veneer, the works can be understood within the familiar context of Rauschenberg’s Combine paintings of the late 1950s and early sixties.

As the exhibition premise suggests, many of the works’ titles are references to films starring Jennifer Jason Leigh. However, knowledge that gorgeously dyed and sewn fabric of “Georgia, or Take Me Back Take Me Way Way Way Back” points to the penultimate scene in the 1995 film “Georgia” where Leigh’s character performs a pathetic, gut-busting version of Van Morrison’s “Take me Back,” isn’t especially edifying within the context of the piece itself.

Peppering the space are a collection of small-scale, untitled works on paper that offer some emotional respite from the intensity of Zuckerman-Hartung’s “everything and the kitchen sink” approach. Playful and restrained with snippets of text and pastel watercolor hues, these pieces provide a sketchbook insight into the artist’s immediate response to the physical world and resonate with an expressive clarity lacking in her larger works. Given the nation’s current political climate, Zuckerman-Hartung’s oppositional anti-aesthetics ought to feel more timely than they do. Instead, the force of her visual statement feels unnecessarily diminished by the panoptic approach to material. (Alan Pocaro)