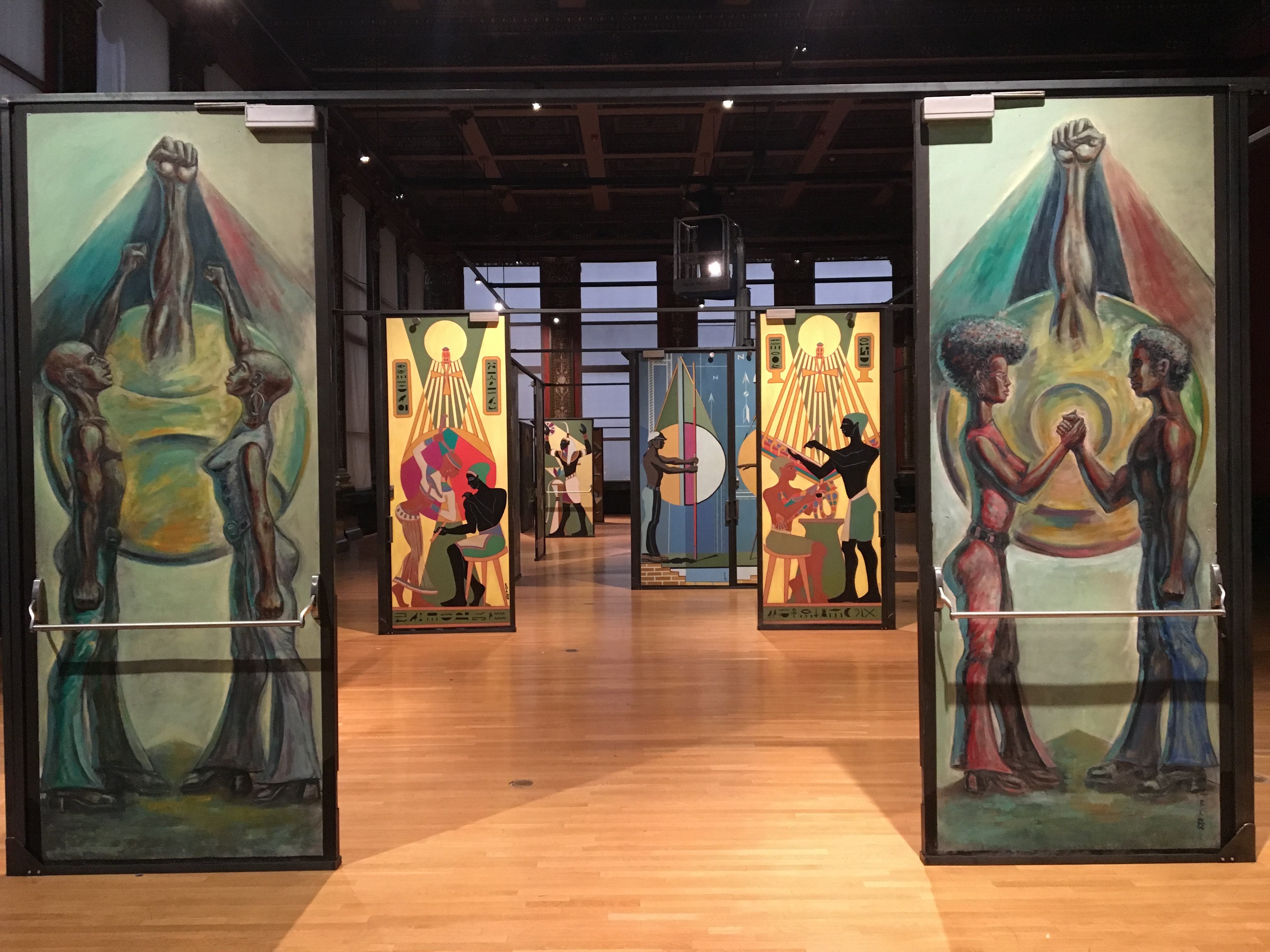 Motorists might well remember the original Malcolm X College built in 1971. It stretched out along the Eisenhower Expressway—long, low, black and as forbidding as only a former assistant of Mies van der Rohe could design it. A local art professor, Eugene “Eda” Wade, was hired to paint the inner staircases so they “wouldn’t look like solid black prison doors” and to proclaim the new institution’s historically unique mission as spelled out on the cover of a student handbook from the period: education, liberation and unity. They were represented by a quill with paper, a gun with broken chains, and two hands clasped in unison. A clenched fist in the center delivered the Black Power salute.

The 1971 building has been demolished and replaced and Malcolm X College now focuses on healthcare training, with the nearby Rush University Medical Center as a primary corporate partner. Sixteen sets of ten-feet-by-four-feet doors painted by Wade, however, have amazingly survived in near perfect condition. Temporarily on display in the Cultural Center, they testify to a revolutionary vision for Chicago’s African-American community.

The designs aggressively communicate a defiant sense of urgency, purpose, self-improvement and community service. One set of doors depicts two men kneeling in prayer on the floor of a prison cell. Their heads wrapped in chains, they face crucifixes on top of which sit a drug needle and liquor bottle. They are painted with the earthy, fervent social realism of David Alfaro Siqueiros. That same style depicts the practice of the medical arts as well as four cultural heroes selected by the artist: Louis Armstrong, Duke Ellington, Charlie Parker and John Coltrane. One might note that all four are musicians, none are women, and all played Jazz, not Blues, Funk or R&B. A sharper, more linear illustrative style is used to depict other professional activities such as basketball, dance, child care, physical fitness and land surveying.

Half of the doors evoke African traditions. From West Africa came the images of masks and Adinkra symbols that assert traditional values like the authority of God (the Gye Nyame) or the security of home (the Fihankra). From ancient Egypt came images of royal power, both male and female, and the arts of medicine, music and painting. 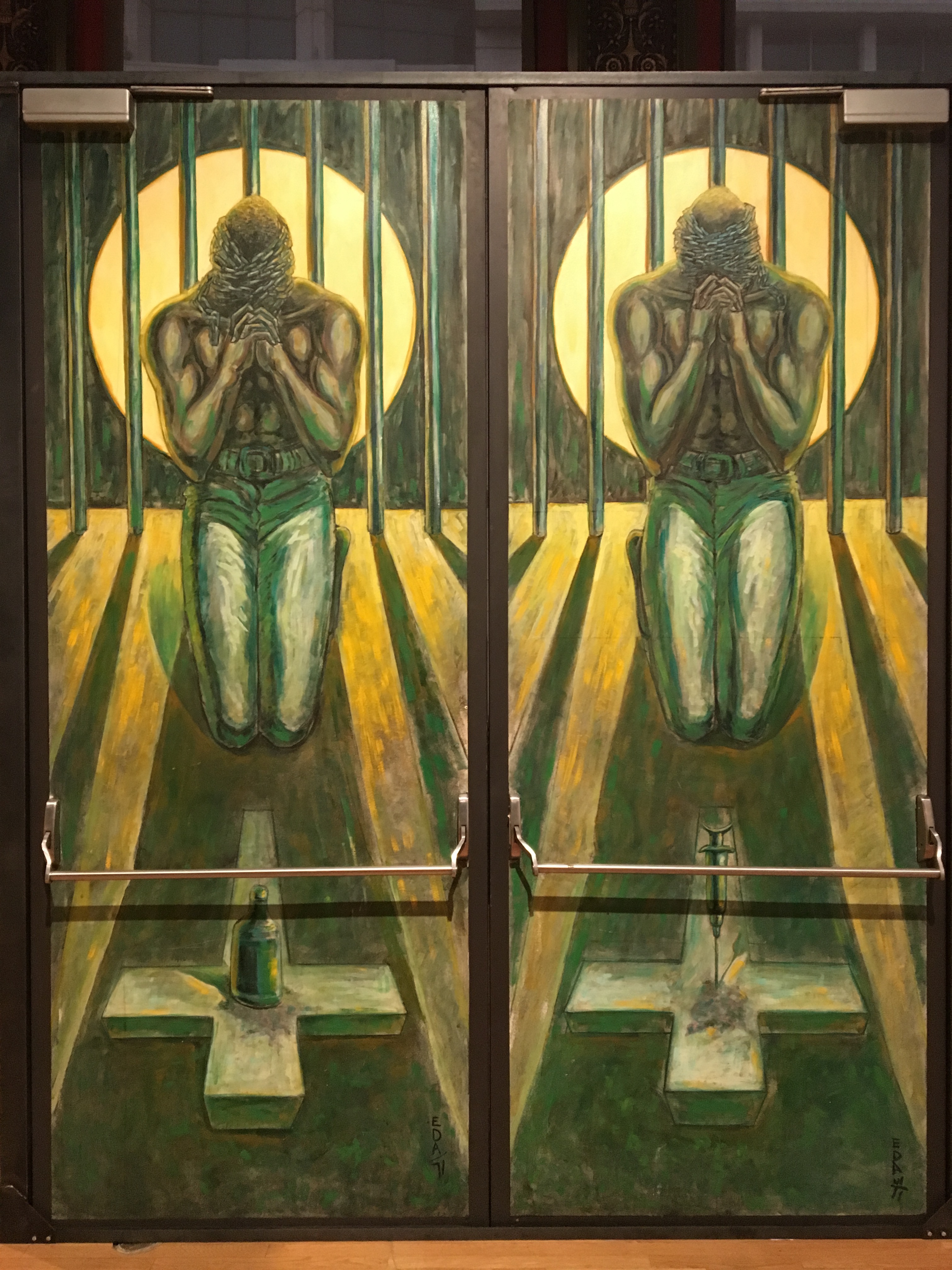 The artist’s style is always strong, elegant and sincere, though clearly aesthetics were secondary to his social message. Wade’s Egyptian motifs do not feel as timeless as those from the Middle Kingdom, but neither are they as purely decorative as their appropriation in Art Deco. They assert faith in the power, order and beauty of a civilization—a belief that has long been absent from much Euro-American art.

The strongest pair of doors pays tribute to Malcolm X, Martin Luther King and Angela Davis. I could not recognize these figures before reading the title, but I certainly felt the anger and power of the image, which recalls Picasso’s work from the 1930s. Directly addressing African-American youth rather than the prosperous art world, this entire historic cycle deserves a permanent home in Chicago where it can continue to instruct and inspire. (Chris Miller)