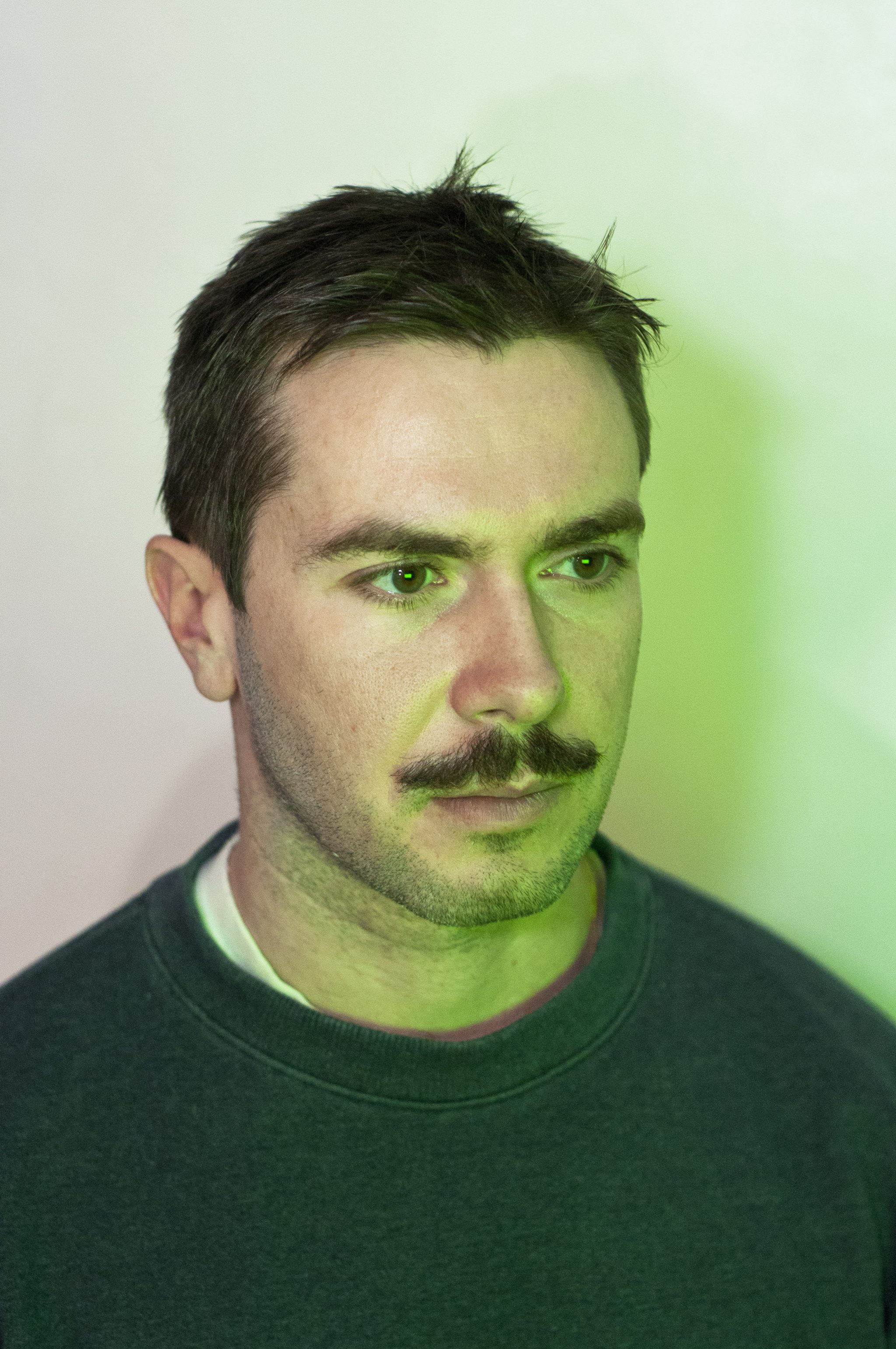 At a time when many artists are making work grappling with sorrow and anxiety, Paul Heyer’s work is joyful, celebratory and generous. Not bereft of content or worldly engagement, his paintings are nonetheless unabashed aesthetic experiments, exercises in formalism, and ultimately prompts, not responses. These days, he paints text-based works, genre paintings of floral motifs and landscapes, and macabre yet comical portraits of everyman skeletons living mundane lives. Heyer wants to “free the viewer’s brain from lived reality” to “allow people to imagine what it would be like to experience relief from their physical bodies.” He speaks about his works as images for a pop, pseudo-spiritual meditation practice.

In a recent series of text-based works, Heyer paints absurd koans. In “Time isn’t Real,” currently on view in the exhibition “Eternal Youth” at the Museum of Contemporary Art, this perplexing aphorism is rendered in a neat cursive that belies a disciplined upbringing, if not an outright Catholic schooling—the text floats in front of a psychedelic pink/purple sky with rust-colored clouds. Heyer admits these phrases are random and often nonsensical, but hopes nonetheless they will provoke curiosity and consideration in the viewer. 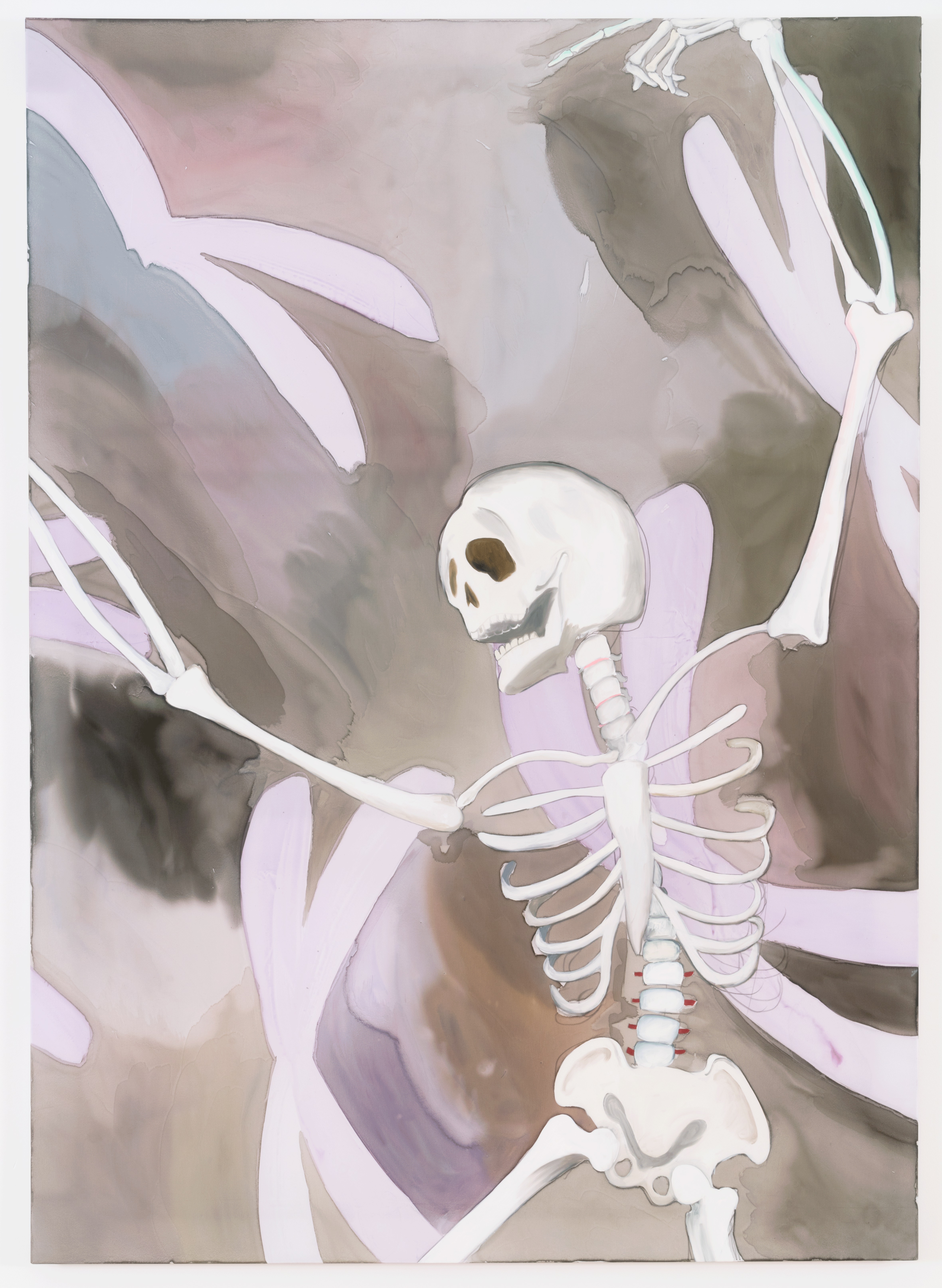 “Skeleton in the Woods (Huffing),” also on view in the MCA show, depicts a young Heyer rendered as a skeleton lounging amongst sunflowers and enacting the work’s title. He holds a tube—is it glue or is it paint?—near his skull’s nasal orifice as sunflowers, abstracted to the point of abyss-like concentric circles, dance around his reclining figure. Heyer locates his fascination with nature in an obsession that started when he was a “weird nature boy” growing up in the south suburbs of Chicago. He reminisces about rebellious teenage years exploring the Spirit Trail park, spending entire days smoking cigarettes and sniffing glue amongst the Illinois wildflowers. According to Heyer, he paints skeletons in lieu of flesh bodies because he finds them humorous, charismatic and non-threatening. Indeed, there is something strangely more relatable about skeletons kissing, doing drugs, getting drunk and standing around awkwardly at parties. His work, he admits, is a product of growing up different than other boys.

However, Heyer’s work is not queer from the standpoint of of identity politics. He describes his practice as queer not because he is a gay man but because his images provide an alternative to canonical art history. He queers a traditional narrative by approaching art as a simulacra for other systems of belief in need of interrogation—religion, politics, partying, drugs, spirituality, club culture, etc. “My paintings are fantasies—that’s what makes them queer,” says Heyer.

Despite the optimism and hopefulness bursting forth from the celebratory aesthetics of his works, some are certainly gloomy, even morose. Flowers droop and die, doomed skeletons entangle in star-crossed, anxious embraces on bright blue grass under an incandescent pink sky. “You don’t always know what is in the paintings until you share them with people,” Heyer muses. And he continues to share with the inaugural show at the new space BAR4000 in April, a “Chicago Works” solo exhibition at the MCA in 2018. (Erin Toale)